Copyright: © 2017 Qyli Z. This is an open-access article distributed under the terms of the Creative Commons Attribution License, which permits unrestricted use, distribution, and reproduction in any medium, provided the original author and source are credited

Objective: The main purpose of this study was the identification of prevalence of potential nosocomial pathogens isolated from environments of Regional Hospital of Korca, Albania.

Material and methods: A total of 393 bacteria were isolated and identified from the hospital. The microbial identification was done with microscopy after Gram staining, colonies morphology and biochemistry.

Results: The study revealed that the prevalence of microrganisms isolated was as following:

Conclusion: Staphylococcus aureus was the most prevalent pathogen isolated in the hospitals while E. coli was the most frequent gram negative bacteria isolated.

Hospital-acquired infections are the sixth leading cause of death in the United States and similar data have been reported from Europe [6], being an increasing problem in intensive care units (ICU), where the patients are more susceptible to colonization and the organisms are often more resistant to antimicrobial agents than in other environments. Since the 80's, infectious disease specialists have recognized that ICU patients acquire nosocomial infections at a much higher rate than patients elsewhere in the hospital [7]. In these confined areas, lower respiratory tract and bloodstream infections happen to be the most lethal; however, urinary tract infections are the most common. Infections caused by gram-negative bacteria have features that are of particular concern since these organisms are highly efficient at up-regulating or acquiring genes that code for mechanisms of antibiotic drug resistance, especially in the presence of antibiotic selection pressure. Most common nosocomial pathogens may well survive or persist on surfaces for a long time, what could explain their survival in ICU wards [8]. Gram-positive bacteria, such as Enterococcus spp. (including VRE), Staphylococcus aureus (including MRSA), Clostridium difficile or Streptococcus pyogenes, and many gram-negative bacteria, such as Acinetobacter spp., Klebsiella spp., Pseudomonas aeruginosa, Serratia marcescens or Shigella spp., may indeed survive for months on dry surfaces. A few others, such as Bordetella pertussis, Haemophilus influenzae , Proteus vulgaris or Vibrio cholerae , however, persist only for days [9,10].

The main purpose of this study was the identification of prevalence of potential nosocomial pathogens isolated from environments of Regional Hospital of Korca, Albania.

393 microbial isolates were obtained from various samples in the wards of the Regional Hospital of Korca. The items from which the samples were collected included sterilized materials, laundries, healthcare workers, surfaces, air and the systems of aspiration-intubation-oxygen. A swab soaked in nutrient broth was used to collect samples from the surfaces, laundries, health care workers and systems of aspiration-intubation-oxygen. All the samples were labeled properly and transported immediately to the microbiology laboratory of Korca for processing. The swab samples were inoculated in Blood agar, Sabouraud agar and incubated at 37°C for 24 h.

Air sampling was performed with settle plates methods. Petri dishes containing Blood and Sabouraud agar were placed at chosen places in the hospital environments at about 1 m above the ground and exposed for 15 min. After this exposure, the plates were covered with their lids and taken to laboratory in sealed plastic bags and incubated at 37°C for 24 h.

After incubation bacterial isolates were identified according to the morphological appearance, cultural characteristics and biochemical reactions.

Gram positive bacteria retained the prime stain (Crystal violet) and appeared violet under the microscope. Gram negative, lost the primary stain and took the sondary stain, causing it to appear red when viewed under a microscope.

Biochemical reactions were carried out in the isolates as follows

A piece of filter paper was pleased in petri dish and 3 drops of freshly prepared oxidase reagent were added. Using a sterile glass rod, a colony of test organisms was removed from a culture plate and smeared on the filter paper.

A bacterial colony was inoculated in simmons citrate agar and incubated at 35°C to 37°C for 18 to 24 h. Than development of blue color was observed.

Growth was visible on the slant surface and the medium became an intense Prussian blue.

Trace or no growth was visible and no color change occurred.

Test bacterial colony were inoculated in tryptophan broth and incubated at 37°C for 24-28 h. Then 0.5 ml of Kovac’s reagent was added. 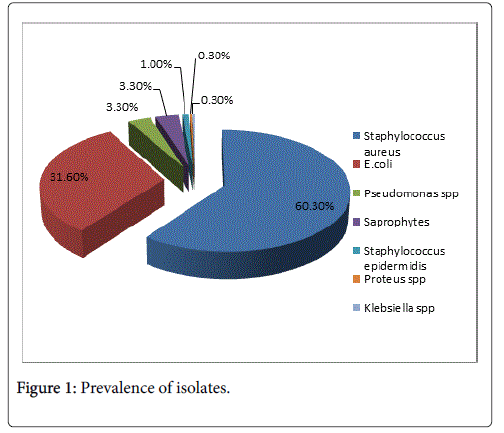 The distribution of Staphylococcus aureus isolates was as following:

8% of isolates were obtained from the sterilized materials, 14.8% from the laundries, 35.9% from the surfaces, 28.3% from healthcare workers, 2.1% from air and 11.0% from the systems of aspirationintubation- oxygen samples.

The distribution of E. coli isolates was as following:

8.1% of isolates were obtained from the sterilized materials, 16.1% from the laundries, 60.5% from the surfaces, 4.8% from healthcare workers, 2.4% from air and 8.1% from the systems of aspirationintubation- oxygen samples.

The distribution of Pseudomonas spp. isolates was as following:

7.7% of isolates were obtained from the sterilized materials, 15.4% from the surfaces and 76.9% from the systems of aspirationintubation- oxygen samples.

The distribution of Saprophytes isolates was as following:

Staphylococcus epidermidis , Proteus spp. and Klebsiella spp. were isolated only from the healthcare workers samples (Table 1 and Figure 2). Identification of microorganisms of clinical importance in the environments of the Regional Hospital of Korca confirmed the presence of pathogens which are potentially related to nosocomial infections.

This result is similar to other studies that has reported S. aureus the most frequent bacteria in hospitals environments (60.30%) [11,12]. Staphylococcus aureus was isolated from all the types of samples, with a higher prevalence in the samples from the surfaces (35.9%).

E. coli was the most frequent gram negative bacteria isolated in hospital environments (31.60%) [13]. E. coli was isolated from all the types of samples, predominating in the samples from the surfaces (60.5%).

Pseudomonas spp. was the sond most frequent gram negative bacteria isolated in hospital environments (3.3%). Predomination of Pseudomonas spp. in the samples of the systems of aspirationintubation- oxygen (76.9%) indicates high risk for nosocomial pneumonia [14,15].

The prevalence of Saprophytes isolated from the hospital environments was 3.3%. They were mostly found in the samples from the surfaces (92.3%) [16-18].

Staphylococcus epidermidis, Klebsiella spp. and Proteus spp. were isolated with a low prevalence, respectively 1.0%, 0.3%, 0.3%. They were isolated only in the samples from the healthcare workers [19].

Hospital environment serve as a potencial reservoir of microorganisms that can cause nosocomial infections. The results of this study revealed that Staphylococcus aureus was the most prevalent pathogen isolated in the hospitals while E. coli was the most frequent gram negative bacteria isolated. The high prevalence of pathogens in this study might be due to poor hygienic practice in the hospital and lack of proper surveillance system for the control of potential nosocomial pathogens. Therefore, based on this finding it is recommended that management of the hospital should establish new politics which will help to minimize the spread of potential pathogens in the hospital environments.