Prevalence of Substance Dependence among Susceptible TB Patients in a Private Sector Hospital in Karachi, Pakistan

Copyright: © 2016 Khan S, et al. This is an open-access article distributed under the terms of the Creative Commons Attribution License, which permits unrestricted use, distribution, and reproduction in any medium, provided the original author and source are credited.

Background: Pakistan ranks sixth amongst the twenty-two TB high-burden countries in the world, accounting for one of the major health problems in Pakistan. Substance abuse is the most commonly reported behavioral risk factor among TB patients.

Objective: The objective of this study was to find out substances TB patients use frequently.

Methodology: A retrospective review was performed to analyze substance dependence in TB patients at Indus Hospital. Data were collected from 1,234 newly enrolled adult patients counseled at baseline from February 2012 to February 2014. The patients were categorized as substance dependent if they were positive on three of the seven criteria within the same year as defined by Diagnostic Statistical Manual of Mental Disorder Text Revision (DSM IVTR). Tolerance, increased amount of substance and persistent desire or unsuccessful efforts to cut down or control substance use was observed in our patients.

Previous studies on the linkage between smoking and TB as a disease showed that there was a significantly increased risk of clinical TB among smokers regardless of AFB positivity, gender, ages and socioeconomic status.11 Although directly observed treatment (DOT) strategy has decreased TB transmission and its prevalence, but, it is still a major public health [3,4].

Substance abuse is a way of using drugs which is not medically approved, as they cause feelings of delusion alters the perception of the person and also causes physiological and psychological dependence [5]. Substance abuse in TB can not only cause an increase in the disease but can also co morbid with other diseases. In Pakistan it is estimated that about 5 million drug addicts are present with more than 50% being youth who are playing a major role in the spread of infectious disease like tuberculosis [6].

It has been estimated worldwide that nearly 1.25 billion people use tobacco and 50 percent of them end up in death due to its use [7]. Almost 5.4 million deaths occur annually from tobacco-related diseases and this shall rise to 8.3 million by 2030 [8]. A recent survey from Pakistan reported that 33% men and 4.7% women use tobacco daily [9]. Tobacco addiction is closely linked with tuberculosis and poor treatment compliance leading to high mortality rate [10].

Even if you have been cured in the past, the risk of developing active TB disease again is three times higher in cigarette smokers compared to non-smokers [11].

Diseases like TB have direct effect on a person’s immunity hence any such drug addiction leads to repercussions and co morbidity.

High prevalence of TB among drug users may also be due to environmental and risk behaviors along with physiological effects of the drug use. A number of researches show a strong connection between Tuberculosis and substance dependence [12].

Due to the longer TB regimens along with drug addiction, it has been observed that adherence in such treatment protocols is difficult hence intensive counseling session with the help of mental health practitioners can prove to be fruitful in getting better results by the end of treatment completion [13].

DOT directly observed therapy is a better way of dealing with both the problems in hand, the on field team can help the patients adhere to the tuberculosis treatment regimen along with reinforce them with avoidance of substance dependence [14].

The patient in question needs to be given immediate and continuous reassurance in order to keep them compliant to the treatment as well as away from the drug use. Social and family support work wonders in this regard, their acceptance, compassion, support and persistence leads to effective treatment which results in better outcomes.

Psychological services in this regard can be of great help as it provides continuous positive regard to the patient, helping him/her to recover from the withdrawal symptoms of the substance abuse.

A retrospective review was performed to analyze substance dependence in TB patients at Indus Hospital. Data was collected from 1,234 newly enrolled adult patients counseled at baseline from February 2012 to February 2014. The patients were categorized as substance dependent if they were positive on three of the seven criteria within the same year as defined by Diagnostic Statistical Manual of Mental Disorder Text Revision (DSM IV-TR). Tolerance, increased amount of substance and persistent desire or unsuccessful efforts to cut down or control substance use was observed in our patients.

The questionnaire consisted of basic demographic, social history of the patient, TB related history along with the question, that “have you ever used any kind of drug?” with categories, yes or no. Quantity and duration of the use of substance was also asked. The different types of drugs commonly used in Karachi were enlisted in separate categories, it included; cigarette smoking, naswar, gutka, tobacco, alcohol, pan, charas and heroine respectively. The data was statistically analyzed with SPSS version 21. 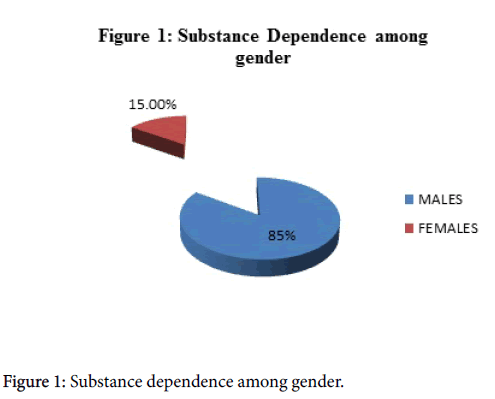 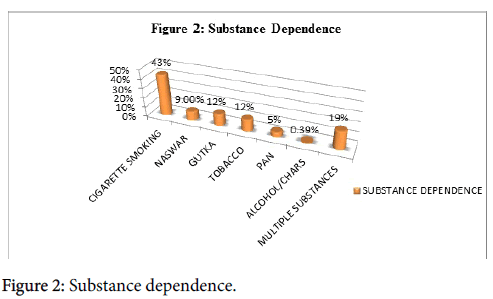 While having a quick look at the results, one can infer that it is of due significance that out of the huge sample of 1234 susceptible TB patients, only 20% i.e. 251 indulged in any kind of substance abuse, hence an important social angle lies that a majority of people misreport that they take any kind of drugs due to the social taboo attached to it, and also they fear that their treatment would be stopped if they will tell the truth or in some cases they fear legal repercussions.

Patients who come along with their relatives are usually truthful as their family informs about all such details to the relevant physician or the para-medical staff nurses.

Another important aspect of this study was that even in spite of the fact that 52% of the sample consisted of females, the drug users were only 15% in total, this seems more to do with non-acceptability of the drug use for females in the society, another facet would be non-availability of the drugs or non-accessibility related issues too; whereas males can have access to such drugs readily and they are less on the verge of criticism by the society.

Problems primarily arise due to the compromised immune systems of individuals who indulge in different types of substance abuse. In addition, medications for the treatment of tuberculosis are usually metabolized by the liver, which is often damaged by drug usage [15].

The most common type of substance abuse is cigarette smoking due to its acceptance in the society; it is less stigmatized and is found to be accepted amongst the society as a class symbol.

Previous researches report that smoking was evidently linked with manly attributes, having lesser education and lower income level, which were also the findings of smoking patterns in general non-TB populations in South Africa and other countries [16,17].

Naswar and gutka are another type of chewable drugs which are gaining its popularity among the masses and have replaced pan and beatle nuts addiction, which was initially part of the tradition of the sub-continent. It is now prevalent amongst youngsters and labor class.

Another interesting finding of this research is that gutka and chewable tobacco is prevalently used by females because of its packaging and similarity with that of beatle nuts which was previously common and acceptable amongst females and also the society at large. Some of the females reported that at least one male member of the family either husband or brother consumes gutka and/or chewable tobacco, some said they use it for better digestion.

Naswar and gutka was previously associated with ethnicity in Pakistan whereas this trend has declined over the period of time, now this trend of eating gutka or naswar is getting common amongst multiple ethnicities.

Pan was not only a traditional norm, was famous and acceptable drug among the society but it is a common understanding among the masses that it has medicinal value attached to it too. Here the research findings suggest that pan use has declined and has probably been taken over by naswar, gutka and chewable tobacco.

There were also such individuals included in the sample who indulged in multiple drug usage i.e. more than one drug was used by them; it was found that common combination of drugs used were gukta, naswar, pan and cigarettes altogether; such as they not only smoked cigarettes but also consumed naswar or gutka once a day at least, or they alternate between naswar and gutka throughout the day as reported by some of the patients.

Not surprisingly, alcohol problems, substance abuse and smoking were often found to occur concurrently, as reported by the author in a research done in South Africa [18].

Increased attention to groups such as substance dependent groups, which are at high risk, is an important part of strategizing a concrete plan that is likely to contribute in the decrease of TB prevalence that has been seen in many countries during the past decade. To sustain these gains and to help arrest TB epidemics worldwide, continued attention must be paid to populations at high risk, such as drug users.

Due to the longer TB regimens along with drug addiction, it has been observed that adherence in such treatment protocols is difficult hence intensive counseling session with the help of mental health practitioners can prove to be fruitful in getting better results by the end of treatment completion.

TB and substance abuse programs need to work hand in hand. Effective interventions need to be developed by TB programs to address the need of patients who indulge in substance abuse. The management of tuberculosis in people who are substance dependent requires a systematic, well-coordinated approach because of the common convergence and co morbidity of tuberculosis, hepatitis and HIV infection.