Colorectal cancer, the third most common cause of cancer worldwide and the fourth leading cause of cancer death is known to be a major cause of morbidity and mortality. Furthermore, the gallbladder cancer, a rare tumor, occupies the fifth place among the cancers of the gastrointestinal tract.

Colorectal cancer, the third most common cause of cancer worldwide and the fourth leading cause of cancer death is known to be a major cause of morbidity and mortality [1,2]. Furthermore, the gallbladder cancer, a rare tumor, occupies the fifth place among the cancers of the gastrointestinal tract [1-3].

Colorectal neoplasia is usually associated with multiple primary cancers. The synchronous presence of rectal and gallbladder malignancies is one of the extremely rare associations [4]. The treatment should be tailored according to the characteristics and clinical aspects of presentation. Generally the most incriminated risk factors in the occurrence of synchronous primary tumors are the environmental, genetic, immunological and iatrogenic factors [1].

Herein, we present the case of a patient diagnosed with rectal carcinoma and incidental detection of synchronous gallbladder cancer during the staging process of the first tumor.

A 67 year-old male patient, with no past medical or surgical history presented with diffuse abdominal pain, hematochezia, progressive constipation and a weight loss of six kilograms during the last four months. As for the family cancer history, his mother had colorectal cancer diagnosed at the age of 55. No other complaints were noted.

The patient was hemodynamically stable but digital rectal exam revealed a firm vegetating and circumferential tumoral lesion at the lower rectum. Laboratory investigations disclosed low hemoglobin (8 g/dl) as the only positive laboratory finding. CA 19-9 level was normal while CEA was found to be moderately elevated (25 mg/ml). The colonoscopy evidenced an ulcerated and elevated rectal mass arising at 4 cm away from the anus, occupying 70% of the lumen (Figure 1). The rest of the endoscopic exam was normal. Multiple biopsies of this growth were taken and showed a moderately differentiated adenocarcinoma of the rectum. Contrast enhanced CT scan of the abdomen and pelvis aiming at a staging evaluation was performed and evidenced a circumferential rectal mass (Figure 2), sigmoid colon dilatation and incidental detection of an abnormal suspicious gallbladder wall thickening of more than 3 mm (Figure 3). No signs of metastatic disease were noted. No other relevant findings were detected. The chest X-ray was normal. 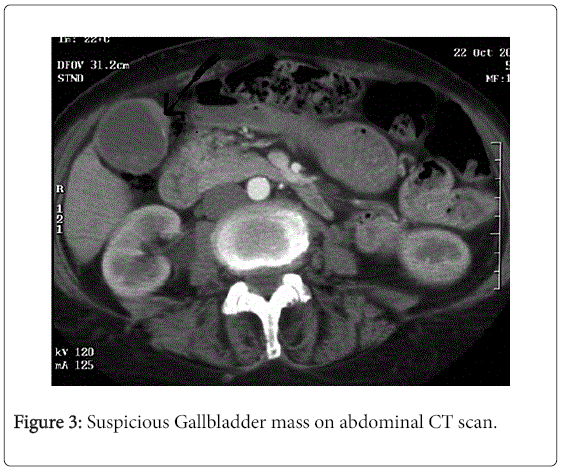 The patient underwent an open abdominoperineal resection in addition to cholecystectomy. He recovered well from the operation with no complications and was discharged on the 6th postoperative day.

Rectal histopathology demonstrated a moderately differentiated adenocarcinoma around 4 cm of length, with free distal and proximal borders and infiltration of the visceral peritoneum (Figure 4). Metastases in 4 of 6 identified lymph nodes were found, and the pathological staging for this specimen was T4N2M0. The Patient was sent to surgery for large liver resection and referred to oncology department for adjuvant therapy.

The colon is the most involved organ in the occurrence of synchronous cancers [3,5] especially in advanced age patients. The incidence of multiple primary cancers in the colon and rectum accounts from 2-5% [6,7]. Presence of sporadic synchronous carcinomas of the rectum and gallbladder is a rare presentation and the incidence is of 4.3% for gastrointestinal tract malignancies [5,8]. In fact, patients suffering from Lynch syndrome (Hereditary nonpolyposis colorectal cancer) and Peutz-Jeghers syndrome (PJS) have a higher risk of biliary tract malignancy and colorectal malignancy [2].

Billroth in 1889 was the first to describe multiple malignancies. It would be interesting to note that during the recent years the occurrence of multiple tumors increased due to the improved average age of survival. We note also that the development of new techniques and screening procedures has allowed an earlier and reliable detection of associated tumors [4,9]. In fact the precise determination of the occurrence of multiple primary cancers remains difficult because often the second cancer can be mistaken as a recurrence or metastases of the first cancer.

Above all, second carcinomas have a key role in determining the prognosis and life expectancy of the patient because the standard curative treatment is resection of each tumor whenever it is possible [3,9]. There are no well-defined guidelines for the treatment of patients presenting with multiple malignancies and it’s still controversial [2]. The decision making for work up, management and follow-up of these patients will be instituted according to the guidelines of each malignancy.

Besides, it is important to note that double primary malignancies can be divided into synchronous and metachronous cancers depending on the interval between tumor diagnosis. Synchronous cancers are those diagnosed at the same time or within six months and metachronous cancers are those diagnosed within six months or more time interval from each other [1]. This classification is based on Warren and Gates criteria [4,9,10], depending on the histological confirmation of malignancy in both primary tumors, a 2 cm normal mucosa between the two cancers and if the second tumor arises in the same location they should be separated by at least five years of time and finally the hypothesis that the second cancer is a metastasis or recurrence of the first one must be excluded.

Several hypotheses explain the increase in the incidence of multiple primary cancers such as exposure to carcinogens and genetic alterations. Horii and et al. [11] emphasized on the major role of microsatellite instabilities (MSI) due to mutations in mismatch repair genes (MMR) [2]. 10% of cancer patients develop a second primary cancer within ten years of diagnosis and treatment of the first one [11]. The role of MSI in sporadic multiple primary malignancies was underlined by its involvement in Lynch syndrome due to MMR genes mutation leading to this instability [2]. 2-4% is the probability of developing a biliary tract malignancy in Lynch syndrome [2,12]. The occurrence of colorectal and gallbladder cancer is also increased in (PJS). It’s important to note that our patient doesn’t fulfill the criteria of Lynch syndrome or PJS.

To prove if a genetic defect involving the DNA repair and replication system is present, it would be interesting to examine the replication errors (RER) at microsatellites loci on different chromosomes. If the RER phenotype is positive it is in favor of the occurrence of multiple primary cancers. It would be appropriate to test the RER phenotype in patients affected by a primary cancer to detect among them the highest risk patients [2,11].

In addition, the combination of cytokeratin (CK) expression CK7 and CK20 is considered to be used for the differential diagnosis of carcinomas originating from different sites. In our case, we did not perform immunohistochemical analysis, because there are very few reports in the literature regarding the clinical significance of immunohistochemical markers in gallbladder carcinoma. Furthermore, no gallbladder metastasis of colorectal cancer is described in the literature.

A special attention should be given to the link existing between colorectal and gallbladder carcinomas. Some studies suggest that their simultaneous occurrence is mainly due to gallstones and not to the genetic or hereditary risk [13]. In reality, the fecal excretion of bile acids is increased in patients suffering from colorectal cancer and those who have undergone cholecystectomy. This is the reason that incited the researchers to insist on this association between these malignancies [13].

In this report, the patient was diagnosed with rectal adenocarcinoma and while accomplishing the preoperative staging with an abdominal and pelvic CT scan, a newly-diagnosed gallbladder synchronous cancer was observed and confirmed histologically after surgery.

The simultaneous occurrence of rectal and gallbladder malignancies is rare. The mechanism of this phenomenon is not yet clarified but several hypotheses emphasize on the role of genetic factors. The treatment must be specific for each tumor because the life expectancy and prognosis depend on both while the management should be considered according to the malignancy presenting the worst prognosis.