Incidence of seizure in first year of life is very high. There is a sharp difference between neonatal and post neonatal seizures in infants with respect to etiology, seismology, E.E.G and imaging outcomes and final prognosis. This was an observational prospective study conducted at G.B Panth Childrens’ hospital Srinagar. A detailed history was also sought regarding other variables relevant to the study including a thorough developmental history. A detailed examination was done under controlled conditions after patient stabilization including anthropometry, general physical and systemic examination and developmental examination. Our study found a different aetiological pattern as compared to few other studies done in this age group. Our study found a different aetiological pattern of post neonatal infant seizures that differed significantly from previous studies. Also we recommend a larger cohort of patients to study aetiology in this age group. Further this study found brain imaging as an important tool in predicting seizure recurrence and developmental delay in post neonatal infants presenting with first seizure.

Incidence of seizure in first year of life is very high [1]. There is a sharp difference between neonatal and post neonatal seizures in infants with respect to etiology, seismology, E.E.G and imaging outcomes and final prognosis [2]. Considerable research on neonatal seizures has been done; however information regarding the profile of patients with first seizure in the age group of 1 to 12 months is scarce. Our study was undertaken with objectives of finding the epidemiological, clinical and etiological profile of patients in the age group of 1 to 12 months presenting with first seizure and to ascertain their E.E.G and imaging findings. Seizure recurrence and developmental delay was also studied during the first six months post seizure.

This was an observational prospective study conducted at G.B Panth Childrens’ hospital Srinagar, a tertiary care hospital for children from March 2016 to December 2016. A written informed consent was obtained from parents or primary care taker. Study population included infants between age group of 1 to 12 months presenting to the hospital with first seizure. Infants with any significant perinatal history (history of neonatal jaundice needing phototherapy or exchange transfusion, birth asphyxia, hypoglycemia or with prior history of seizures in the neonatal or post neonatal period were excluded from the study. History was taken about the seizure from care takers to differentiate between actual seizure and seizure mimics and to ascertain the semiology of seizure event. Attendants were encouraged to video image the seizure if recurrent so as to be certain about the seizure occurrence. A detailed history was also sought regarding other variables relevant to the study including a thorough developmental history. A detailed examination was done under controlled conditions after patient stabilization including anthropometry, general physical and systemic examination and developmental examination. A child psychologist was involved in developmental assessment. Stigmata of intrauterine infections and any neurocutaneous markers were sought. Assessment for hearing and visual impairment was also done. Patients received treatment as per standard management protocols. Relevant investigations (blood sugar, serum total calcium, serum electrolytes and septic workup) were done during hospital stay as required. An E.E.G was done after 2 weeks of seizure occurrence wherever indicated. E.E.G was read by a neurologist and findings were recorded as either normal or abnormal depending on epileptiform abnormalities. Brain imaging (C.T or M.R.I), TMS and urine GCMS were also advised as required according to protocols. Patients were followed for 6 months post seizure and contact with primary care taker was maintained through telephonic calls and planned O.P.D visits. For statistical analysis fisher exact test was used for proportionate variables and student t test for continuous variables.

Out of 177 consecutive patients presenting as first seizure after neonatal age, 76 (42.9%) presented within first year of life. Twenty infants had significant history during neonatal period and were excluded. Six patients were lost to follow up. There were 31 male patients (62%) and 19 female patients (38%). Mean age at seizure occurrence was 5.3 months (S.D ± 2.1) with maximum age at presentation of 12 months and minimum of 1.5 months. Forty one patients (82%) presented with generalized seizures as per history given by the attendants or as witnessed by the doctor in emergency department. Generalised tonic posturing of whole body and up rolling of eye balls was the consistent seizure pattern in all these patients. Only two patients (4%) had focal seizures. Both these patients had unilateral clonic movements of limbs. Seizures in 7 patients (14%) could not be classified (Figure 1). Four patients (8%) had acute symptomatic [3] (provoked) seizure. Only 2 patients (4%) were received in status epilepticus. Shock was present in these 2 patients on admission and 1 patient developed shock during hospital stay (total 6%). 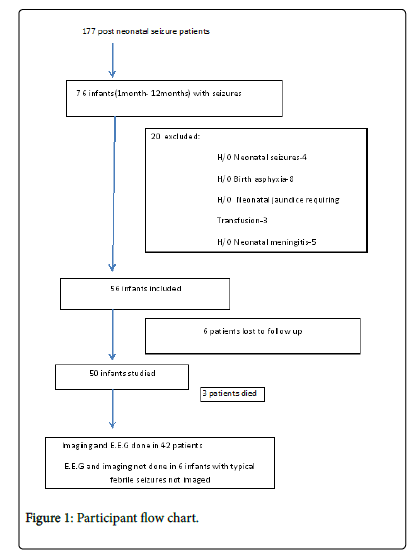 Respiratory failure developed in 3 patients (6%), needing mechanically ventilation. Family history was significant in 12 patients (24%) with 8 patients (16%) having a first degree relative with a seizure disorder or having experienced seizure episode in the past. Four patients (8%) had a significant history in second degree relatives. Third degree consanguinity was noticed in 2 patients (4%). On examination none of the patients was found to have a neurocutaneous marker or dysmorphic features suggestive of syndromic or chromosomal disorder. Also none of the patients had any significant organomegaly, visual or hearing impairment. Four (8%) patients had a developmental delay on admission (Table 1).

Except for 1 patient with hypocalcaemia, no other patient in the study group was found to have any electrolyte imbalance or hypoglycemia on initial evaluation. C.S.F examination was done in all 6 typical febrile seizure patients and none had meningitis. Also there was no developmental delay or seizure recurrence noted in these 6 patients during 6 month follow up period. E.E.G and brain imaging were done in 42 patients as indicated. Among these 42 patients E.E.G abnormalities were noted in 15 patients (35.7%), while as imaging abnormalities were noted in 10 patients (23%) (Table 2).

There were 3 deaths (6%) in the study group. Two deaths occurred on initial admission because of shock and multiorgan failure and one death occurred during follow up at home because of unknown reasons.

Our study found a high percentage (42.9%) of children presenting as first seizure between the age of one month and one year. This is in conformity with other studies which have documented seizure incidence being highest in infancy among paediatric patients [2,4]. However these studies have included neonates with seizures as well. Male patients were found to constitute 62% of total study group, indicating a higher incidence of seizures in males as compared to females in this particular age group. Other studies on paediatric seizures have documented similar result [5]. 82% patients presented with generalised seizures which is a higher percentage when compared to studies done on childhood epilepsies as one group. One study reported 66% patients presenting with generalised seizures in a cohort of 50 up to 3 years of age [6]. Generalized tonic-clonic seizures were reported as the most common seizure type (69.9%) in children in a study from Nepal [7]. However our study found generalised tonic seizures as the most common seizure pattern in this particular age group. Although we tried to elicit history related to seizure semiology in detail in cases where seizures were not observed in hospital, there may be a possibility of miscommunication in a few cases.

Our study found a different aetiological pattern as compared to few other studies done in this age group. Instead of acute symptomatic seizures (related to C.N.S infections, hypocalcaemia, hypoglycaemia, electrolyte imbalance, vaccine induced), unprovoked seizures were found to be most common (58%). Also structural C.N.S abnormalities were noted in a significant number of patients (12%). A recent study reported 51% patients in the same age group presenting as provoked seizures with hypocalcaemia constituting 26% of seizures [8]. However like our study, the sample size studied was small. A larger cohort of patients may be needed to arrive at a proper conclusion in this regard. Our study noted E.E.G abnormalities in 35.7% of patients whose E.E.G was done. Abnormal E.E.G was reported in 24.1% in children with generalised seizure in a previous study [9]. Imaging abnormalities were found in 23% of patients imaged in our study. This result conforms to other studies done in children although across the whole paediatric age group [10].

Our study found developmental delay in 30% of patients and seizure recurrence in 32% of patients during a 6 month follow up. Both developmental delay and seizure recurrence were significantly associated with abnormal brain imaging while association with abnormal E.E.G was not statistically significant. These associations have not been studied previously in this age group.

A relatively small sample size, short follow up period for studying seizure recurrence and developmental delay and reliance on care taker history in many cases about seizure event instead of actual observation or video imaging was major limitations of this study.

Our study found a different aetiological pattern of post neonatal infant seizures that differed significantly from previous studies. The difference could be explained by a different sample population studied as compared to previous studies which studied childhood seizures as whole. Also we recommend a larger cohort of patients to study aetiology in this age group. Further this study found brain imaging as an important tool in predicting seizure recurrence and developmental delay in post neonatal infants presenting with first seizure.

Copyright: © 2017 Qadri I, et al. This is an open-access article distributed under the terms of the Creative Commons Attribution License, which permits unrestricted use, distribution, and reproduction in any medium, provided the original author and source are credited.