Background: The discussion has continued concerning Calorie Restriction (CR) and Low Carbohydrate Diet (LCD) for years. Authors and colleagues have continued clinical research on LCD. In this study, CR diet was given to diabetic patients and the new evaluation way of insulinogenic index-carbohydrate 70 g (IGI-carbo70) would be proposed.
Subjects and methods: The subjects were 48 patients with Type 2 diabetes mellitus (T2DM) and admitted for 14 days for further evaluation and treatment. CR diet was provided on day 1 and 2, including 60% carbohydrate, 25% lipids and 15% protein with 1400 kcal/day. On the morning of day 2, breakfast with 70 g of carbohydrate was given, and blood glucose and immune reactive insulin (IRI) at 0 and 30 min and IGI were investigated.
Results: Average HbA1c was 7.9% and Morbus (M) value was 108 in median. Glucose and IRI on 0-30 min significantly increased as 166-212 mg/dL, 4.3-1.9 μU/mL, respectively. Classified into 3 groups as to HbA1c level, low, middle and high group showed HbA1c 6.0%, 7.8%, 9.7%, respectively. Glucose and IRI on 0-30 min in median were 117-50, 166-203, 218-299 mg/dL, 4.4-12.8, 4.5-13.5, 4.2-9.9 μU/mL, with IGI 0.25, 0.14, 0.10, respectively.
Discussion and conclusion: Newly-proposed IGI-carbo70 was investigated, and there were several correlations among 8 related biomarkers. These findings suggest that current results would become the fundamental data and IGIcarbo70 could be the useful way to evaluate diabetic status by usual meal with mixed nutrients.

The discussion has continued concerning Calorie Restriction (CR) and Low Carbohydrate Diet (LCD) for years [1-5]. Clinical predominance of LCD has been gradually known and more prevalent. In European and North American region, Atkins and Bernstein originally have begun to introduce LCD [6,7].

Through our clinical study, we always compared the differences of the glucose variability between CR and LCD. In this study, we have given CR diet to the patients with type 2 diabetes mellitus (T2DM), and investigated the responses of blood glucose, immunoreactive insulin (IRI) value and insulinogenic index (IGI), suggesting the usefulness of experimental application of IGI as an approach for clinical study.

Subjects were admitted for 14 days for further evaluation and treatment of T2DM. The protocol of diet therapy was as follows: 1) Calorie Restriction (CR) diet was provided on days 1 and 2, which had 60% carbohydrate, 25% lipids and 15% protein with 1400 kcal/day. 2) Low Carbohydrate Diet (LCD) was provided from 3 to 14 days, which had 12% carbohydrates, 64% lipids and 24% protein with 1400 kcal/ day. This LCD has been so-called “super-LCD formula” in our clinical research for LCD, which is one of the very low-carbohydrate ketogenic diet (VLCKD) by the definitions of LCD [12-14].

On day 2, daily profile of blood glucose was studied 7 times a day, which are 8, 10, 12, 14, 17, 19, 22 h. According to the glucose level, 2 markers were calculated. One is the average glucose level, and another is Morbus (M) value. M value is a useful index representing both blood sugar level and mean amplitude of glycemic excursions (MAGE) [17- 19]. As for the glucose variability, daily profiles of blood glucose were measured 7 times a day, and obtained data were calculated for average glucose level and Morbus (M) value. M value has been proposed for researching MAGE. This index has been calculated as a logarithmic transformation of the deviation of glycemia from an arbitrary assigned “ideal” glucose value, with an expression of both the mean glucose value and the effect of glucose swings [17-20].

As to the interpretation of M value, the standard range is <180, borderline is 180-320 and abnormal is >320. Adequate sampling times a day have been argued for the detail and precise evaluation of glucose variability and MAGE. There were similar results on 7 times or 20 times of sampling per day [17-21] showing similar result in comparison with continuous glucose monitoring (CGM) [19-22].

In this study, obtained data was represented as the mean ± standard deviation (SD) and also represented median, quartile of 25% and 75% in biomarkers. For statistical analyses, correlation coefficients were calculated using Pearson or Spearman test of the Microsoft Excel analytical tool, which is Four steps Excel Statistics 4th edition [23].

Intergroup comparisons were made using the Wilcoxon rank sum test or the Bonferroni multiple comparison (Lambert method). A significance level of less than 5% obtained using a two-tailed test was considered to be statistically significant.

Current study was conducted in compliance with the ethical principles of the Declaration of Helsinki and Japan’s Act on the Protection of Personal Information along with the Ministerial Ordinance on Good Clinical Practice (GCP) for Drug (Ordinance of Ministry of Health and Welfare No. 28 of March 27, 1997). No ethical committee meeting was held. Informed consent was obtained from the subjects. The study was registered with UMIN #R000031211.

Biomarkers data related to 70 g of carbohydrate intake were shown in Table 2. The values are expressed by the average, standard deviation, median and quartile of 25% and 75%. Responses of glucose and IRI against 70 g of carbohydrate were shown in Figure 1. Number of the subjects is 48. There was significant difference between glucose increase at 0 and 30 minutes, and between IRI increase at 0 and 30 minutes (p<0.01). 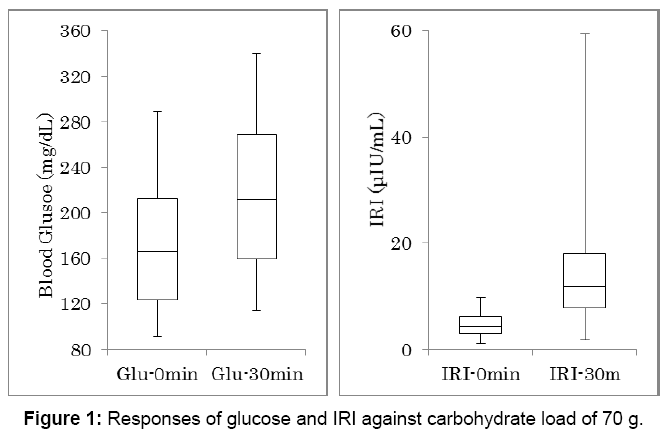 Figure 1: Responses of glucose and IRI against carbohydrate load of 70 g. 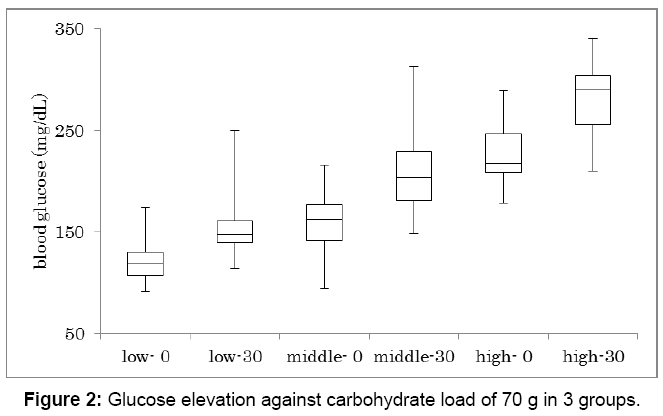 Figure 2: Glucose elevation against carbohydrate load of 70 g in 3 groups. 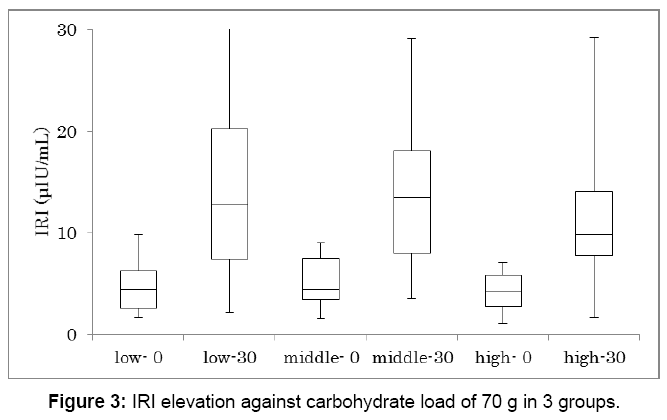 Figure 3: IRI elevation against carbohydrate load of 70 g in 3 groups.

Data from Figures 2 and 3, Insulinogenic Index (IGI)-carbohydrate 70 g (IGI-carbo70) was calculated and classified in 3 groups (Figure 4). 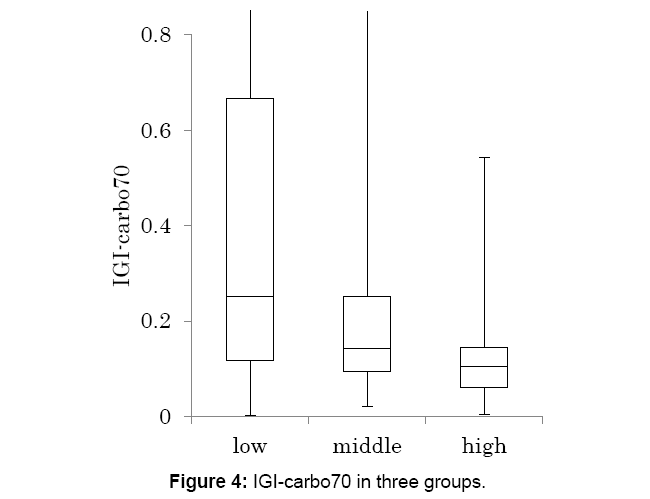 In Asian countries, overconsumption of starchy foods such as rice has induced a rapid and sharp postprandial hyperglycemia [32-34]. This increased glucose response is accompanied by an insulin surge and contributes to the etiology of diabetes [35].

Recently, effect of co-ingestion of amino acids with rice on glycemic and insulin response was investigated in 7 various patterns [36]. Rice with 68 mL of amino acid mixture showed the best results in reducing the peak blood level [36]. Its merit lies in enabling people living in Asia to reduce postprandial hyperglycemia due to carbohydrate-rich rice meals by the inclusion of a ready-to-drink amino acid mixture [37-39].

The effect of a rice bowl topped with beef to blood glucose was investigated [44]. This is one of famous Japanese fast food with protein 18.4 g, fat 20.9 g and carbohydrate 82.9 g, and it was given to 12 healthy volunteers with 26.9 years old in average. Blood glucose increased 65 mg/dL at 30 min. Thus, even if the subjects are healthy, blood glucose increase seems to be remarkable.

Taking these results and discussion into consideration, research for postprandial hyperglycemia with mixed-nutrient load would be significant. Newly-proposed IGI-carbo70 was investigated, and there were several correlations among 8 related biomarkers. These findings suggest that current results would become the fundamental data and IGI-carbo70 could be the useful way to evaluate diabetic status by usual meal with mixed nutrients.

The part of the content of this article was presented at the 89th and 90th Scientific Meeting of Japan Endocrine Society (JES) Annual Congress, Kyoto, 2016 and 2017. The authors would like to thank the patients and staffs for their cooperation and support.