Copyright: © 2014 Qin J, et al. This is an open-access article distributed under the terms of the Creative Commons Attribution License, which permits unrestricted use, distribution, and reproduction in any medium, provided the original author and source are credited.

Noise induced hearing loss (NIHL) is a problem that affects many people throughout the world. According to the World Health Organization (WHO), exposure to excessive noise is the major avoidable cause of permanent hearing loss worldwide. In the United States, NIHL is one of most common occupational related diseases. It is estimated that 16.1% of adults or about 29 million Americans have some type of hearing loss within the speech frequency range. This number seems to be on the rise since about 30 million Americans are currently exposed to noise every day in their jobs. Hearing loss has been shown to lower the quality of life, impair social interactions, cause isolation, and can cause loss of cognitive function

Noise induced hearing loss (NIHL) is a problem that affects many people throughout the world. According to the World Health Organization (WHO), exposure to excessive noise is the major avoidable cause of permanent hearing loss worldwide [1]. In the United States, NIHL is one of most common occupational related diseases. It is estimated that 16.1% of adults or about 29 million Americans have some type of hearing loss within the speech frequency range [2]. This number seems to be on the rise since about 30 million Americans are currently exposed to noise every day in their jobs [3]. Hearing loss has been shown to lower the quality of life, impair social interactions, cause isolation, and can cause loss of cognitive function [3].

Although significant progress has been made, NIHL still remains as a severe problem in various industrial and military fields. Specifically, research and investigation on high-level non-Gaussian noise induced hearing loss are still needed. In this study, we will introduce two recently developed research projects on NIHL. One project is focusing on the investigation of impulse noise induced hearing loss for military application, and the other project focuses on the development of a new noise measurement system for the complex noise in industrial fields.

Impulse noise refers to the nonreverberant A-duration wave, and it is a type of highly transient noise widely experienced in military field [11]. Impulse noises can be produced by firearms, rockets, hammering, etc. [12]. It has been demonstrated that the impulse noise could cause more hearing loss than continuous noise with same amount of acoustic energy in animal studies [13]. Impulse noise induced hearing loss remains as a severe health problem in military and industrial fields.

A new digital noise exposure system has been developed to generate impulse noise [14,15]. The system can successfully generate impulse noise with peak sound pressure level (SPL) up to 160 dB, which effectively mimics the noise produced by a military weapon (e.g., M-16 rifle). As shown in Figure 1, the noise exposure system consists of a data acquisition device (NI DAQUSB-6251), an audio power amplifier (Yamaha P2500S), an acoustic compression driver (JBL 2446J), a shock tube extension (3’ length and 2” diameter), an exponential horn (JBL 2380), and a computer. A user interface was created using LabVIEW software to generate digital noise signals and control the system. The system was installed in a reverberant chamber. 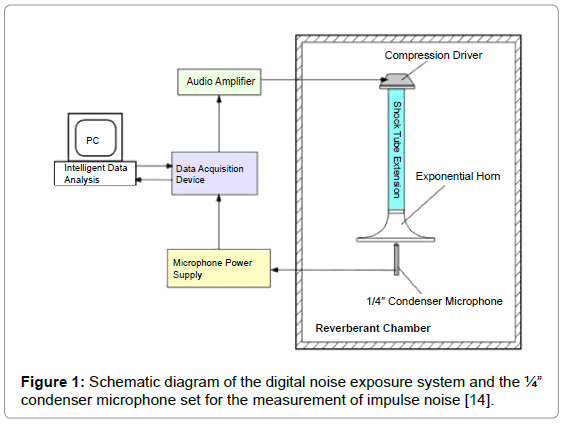 Figure 1: Schematic diagram of the digital noise exposure system and the¼” condenser microphone set for the measurement of impulse noise [14].

The Friedlander wave has been used to simulate the A-duration impulse noise. It can be described by the equation.

where Ps is the peak sound pressure, and the t* is the time at which the pressure crosses the x-axis and goes from positive to negative. The digital signals of impulse noise were generated using the Friedlander equation in LabVIEW, and then converted to analog signals with 62.5 kHz sampling rate. The analog signals were amplified by the audio power amplifier, and fed into the compression driver to generate impulse noise.

To measure the impulse noise generated by the developed system, a ¼” high sensitivity condenser microphone set (GRAS 46BF) was used. The measured signals were converted into digitals signal through the data acquisition device with 125 KHz sampling rate and saved in the computer (Figure 1). The microphone was aligned at the center of the outlet of the horn. The impulse noise signals were generated at different output voltages (from 0.3 V to 8 V).

Figure 2: (A) a representative waveform of the impulse noise generated by the developed system at 5V output voltage, and (B) Sound pressure level of the peak positive pressure P+ vs. the output voltages.

Noise exposure in many workplaces is subjected to the complex noise. The current noise measurement guidelines in the standards (e.g., ISO-1999, 1990, ANSI S3.44-1996, MIL-STD-147 D, 1997) are developed based on the equal energy hypothesis (EEH), which states that NIHL mainly depends on the total acoustic energy of noise exposure [17,18]. In addition, conventional sound level meters (SLMs) which are also designed based on the EEH. However, previous studies showed that the EEH could not accurately rate the complex noise [5,18]. Therefore, the conventional SLMs may not suitable to be used for the assessment the complex noise often experienced in high-noise industrial fields [19].

A waveform profile based noise measurement system has been developed for more accurate assessment of complex noise in industrial fields [20]. As shown in Figure 2A, the system consists of an acoustic test fixture (GRAS 45CA) with two ½-inch pressure condenser microphones assembled, two ½-inch free-field condenser microphones, a 4-channel microphone signal conditioning amplifier, a data acquisition device (NIDAQ USB6254), and a laptop. The test fixture is used to emulate the structures of human head and ear canals. Two assembled ½-inch pressure microphones are used to record acoustical pressure waveforms in the ear cannel, while the other two ½-inch free-field microphones are used to record the pressure waveforms in free field.

After the development, the noise measurement system was validated by compared with a conventional SLM using various noise signals, including pure tone noise, Gaussian noise, and complex noise in the lab. The noise signals were simultaneously measured by the develop system and the SLM. The validation results indicate that the developed system is comparable with the SLM when measuring the time averaged SPLs.

Figure 3: (A) Schematic diagram of the waveform profile based noise measurement system, and (B) A photograph of system setup in a field measurement at a coal preparation plant [20].

Characterization of complex noise measured in the field

The equivalent SPL Leq can be defined as [21]:

where p0 is the reference pressure level 20uPa. PA is the acquired sound pressure in Pa. The time period for data samples ranges from t1 to t2. When applying the A-weighted and C-weighted filters to the acoustic signals, equivalent SPL are described as LAeq and LCeq, respectively.

Table 1: Summary of different noise levels measured at three locations in the field.

Figure 4: (A) A representative waveform and (B) amplitude spectrum of a complex noise signal measured in the field [20].

In summary, we developed new noise measurement system for the investigation of the complex noise in coal mining fields. The developed system not only can measure the noise levels, but also can record detailed waveform of complex noise signals in fields. The system has been successfully validated both in the lab and in a high-noise industrial field. The preliminary results demonstrated that the developed noise measurement system can be used to accurately evaluate the risks of high level complex noise in industrial fields.

NIHL still remains as one of the most common occupational diseases in the United States. Research and investigation on NIHL is still needed in various applications. In this paper, we introduced two recent developments of impulse noise generation and complex noise measurements for different applications. In the first project, the developed noise exposure system can also generate different types of noises. The system can be used to mimic various environmental noises, and it allows researchers to study NIHL in a controlled situation. In another project, the developed noise measurement system focuses on waveforms of noise signals rather than the EEH based energy metrics. Such technology can provide detailed information of a complex noise, and it may lead to the development of new noise metrics. In our future work, a new metric evaluating system will be established, and more field measurements will conducted in different coal mining fields.

This research was supported in part by the Illinois Clean Coal Institute with funds made available by the State of Illinois.