Objectives: The objective of the study was to determine the knowledge, attitude, and practices towards Lassa fever of tertiary health workers.

Primary and secondary outcome measures: A cross-sectional study was conducted using a standardized, self-administered questionnaire, which enquired about the risk perception, knowledge, attitude, and health-seeking behavior towards Lassa fever.

Results: Risk perception among participants was fairly good, while compliance with universal precautions amongst these highly exposed populations should be improved.

Conclusions: Training on Lassa fever should be paired with appropriate and corresponding training on personal protective equipment.

Lassa fever (LF) is an acute viral illness endemic to several countries in West Africa. Lassa virus (LASV) is a zoonotic, rodent-borne, single-stranded ribonucleic acid (RNA) virus from the Arenaviridae virus family. The natural reservoir of the Lassa virus, a ‘multimammate rat’, Mastomys natalensis [1]. Mastomys spp. produce large numbers of offspring, and are abundant in the savannah and forests of West, Central and East Africa. They readily colonize human homes, thus increasing the risk of LASV spread from infected rats to humans. Although LASV was first isolated in 1969 from a missionary nurse working in Lassa town of Borno State in North-Eastern Nigeria, LF seems to have been described as early as the 1950’s in Guinea, West Africa [2,3]. LF is also highly endemic in other West African countries including Sierra Leone, Liberia, and Guinea [4,5] As such, the prevalence of LASV antibodies in the general population is 8-52% in Sierra Leone, [6] 4-55% in Guinea, [6] and 21% in Nigeria [7]. In the early phases of the disease, LF symptoms are similar to those of many other common febrile illnesses such as flu, malaria or typhoid; as such, misdiagnosis is a common problem in the early stages of an outbreak. While LF is mild or has no observable symptoms in about 80% of people infected with the virus, the remaining 20% develop a severe multisystem disease [7,8]. During LF outbreaks, the case-fatality rate can reach as high as 50% [8-11]. LF has an overall fatality rate of 1-2%; much lower than the fatality rate of 9.3% to 18% seen among all hospital admissions [11]. LF continues to be major public health concern in Nigeria, Liberia, Sierra Leone and Guinea, as it is among the largest burden of viral hemorrhagic fevers in West Africa after Yellow Fever and the 2014 Ebola Viral Disease outbreak [9,10]. The populations at risk in Sierra Leone, Guinea, and Nigeria may be as high as 59 million, with an annual incidence of illness of 3 million, and mortality as high as 67,000 [1,11]. LASV has been associated with nosocomial outbreaks with high mortality, [12] and LF cases have been “exported” into the United States of America and Europe by viremic travelers from endemic areas [13]. The increasing LF incidence outside endemic regions, due in part to the increased frequency of international travel, necessitates that health care providers, who are at the highest risk for infection because of their frequent contact with infected patients and their blood or bodily fluids, have comprehensive information on LASV infection.

The large population at risk in West Africa and the limited surveillance and laboratory support for rapid diagnostics has prompted this study. The objective of the study was to determine the risk perception, knowledge, attitude and health-seeking behavior among tertiary health workers towards Lassa fever in the main hospitals situated in the LF endemic area, including the Federal Teaching Hospital Abakaliki, Ebonyi State and, Institute of Lassa Fever Diagnostic Centre and Research laboratory, Irrua Specialist Teaching Hospital, Edo State. LF is endemic in Edo, Nasarawa, Ebonyi and Plateau States. As of October 2012, LF has been reported in 23 of the 36 states including Federal Capital Territory (FCT), and 42 Local Government Areas (LGAs) reported LF cases across the country. Health workers are a high-risk population for exposure when working with LF patients or samples.

Nigeria witnessed an outbreak of Lassa fever in the year 2012 with 1,723 cases, 112 deaths, 201 laboratory-confirmed cases, and a case-fatality rate of 6.50. During the outbreak, six Nigerian tertiary health workers (three doctors and three nurses) lost their lives while managing LASV infected patients.

This study seeks to build upon the existing body of knowledge, attitudes, and practices toward Lassa fever in Nigeria. A previous study compared knowledge, attitudes, and practices between two hospitals within a single State [14]; this study makes the comparison between two hospitals that are from different States, but are within the epidemic zone of LF.

Cases have been previously and still are, reported in Ebonyi and Edo states, thus prompting the present study in these endemic states and among health workers (the most exposed population) of the two major teaching hospitals, which are referring for LF at the national level. The study population consisted of health workers, with ages ranging from 15 to 50 years old. The study was conducted from May to July 2013 at Federal University Teaching Hospital of Abakaliki, Ebonyi State and at Irrua Specialist Teaching Hospital of Irrua, Edo State (Figure 1). 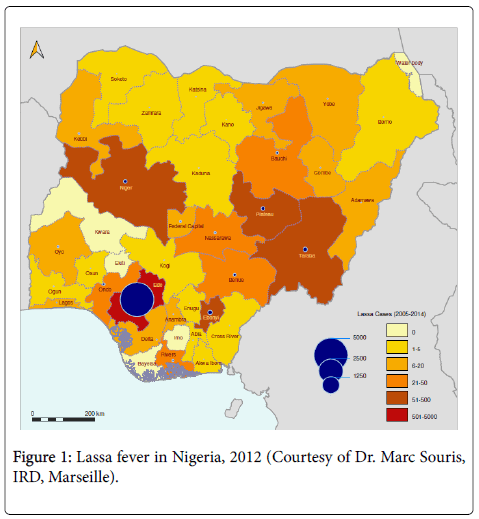 A cross-sectional study was performed, and a total of 326 questionnaires were administered. The survey included questions on the demographics for the survey participants, knowledge of Lassa fever, and occupational-specific knowledge on the treatment and prevention of Lassa fever infections. The sampling frame was comprised from the list of 23 tertiary institutions within the LF at-risk states. Two tertiary health facilities were judgmentally selected, from which 324 persons were selected, 162 from each. These samples were selected using population-weighted ratio of each of the two localities. A stratified sampling method was applied to select departments in those two health facilities from which the samples were taken. The various departments of the health institutions formed the strata, and the sample of 162 was allocated across the strata proportionally. A semi-structured questionnaire with both open/close-ended questions was used.

Ethical approval for the study was obtained from the Ethics Committee of the University of Nigeria Enugu Campus, Abakaliki Federal University Teaching Hospital, Ebonyi State and Irrua Specialist Teaching Hospital, Irrua Edo State. Informed consent was obtained from each participant before enrolling him/her into the study. Investigators conducted the interviews in English, Hausa, Yoruba, and Igbo languages, as applicable to each respondent. Interviews were conducted in the work place of the respondents. Confidentiality assurance was given, and the questionnaire was anonymous. The interview was self-administered.

The questionnaires were collated, and data fed into the computer and analyzed using Statistical Programme for Social Sciences (SPSS Version 17).

Almost all of the health workers surveyed (98.8%) were aware of LF as a infectious disease. Many of the surveyed respondents (89.8%) knew the correct definition of LF. 81.8% (265/324) of health workers surveyed got their information about LF from the community. Most of the survey respondents knew at least one of the major signs or symptoms of LF and identified Ribavirin as the most frequently used treatment for LF (Table 1).

Table 1: Knowledge of definition, clinical presentation and treatment of Lassa fever among the study population of health workers of the two Teaching Hospitals of Ebonyi and Irrua States, Nigeria (2013) (Note: survey participants were allowed to select multiple answers for some questions).

Table 2: Knowledge of transmission of LASV among the study population of health workers of the Teaching Hospitals of Ebonyi and Irrua States, Nigeria (2013) (Note: survey participants were allowed to select multiple answers for some questions).

Table 3: Attitudes to food in relation to Lassa fever of Health workers of the Teaching Hospitals of Ebonyi and Irrua States, Nigeria (2013).

The study indicated that 97.5% of the health workers surveyed acknowledged that LF could be transmitted via contact with the urine of the Natal Multimammate mouse (Mastomys natalensis). 90.7% of surveyed respondents knew that raw and cooked food should be kept in closed containers.

Only 66.7% of surveyed respondents indicated that they always used personal protective equipment (PPE) when it was appropriate. The type of PPE used varied among survey participants: only 43.2% of them used coveralls (providing protection from splashes of blood, specimen, and other forms of contaminations), which is a major form of protection for health workers against infection by patients with highly infectious pathogens. Moreover, only 5.2% of surveyed participants indicated that they did not use the most commonly used PPE (gloves, face masks, aprons, boots, goggles, coveralls), which is a serious indication of exposure. Almost all surveyed respondents (92.3%) reported to health authorities for a proper medical check-up when exposed to a suspected case of LF (Table 4).

Table 4: Practices of Lassa fever among the study population of health workers of the Teaching Hospitals of Ebonyi and Irrua States, Nigeria (2013) (Note: survey participants were allowed to select multiple answers for some questions).

Only two health institutions from the six administrative zones were investigated, and thus may not be fully representative of the knowledge, attitudes, and practices of all health workers in Nigeria. However, these two institutions are located within the endemic zone for Lassa fever, so these results are circumstantial and pertinent to disease prevention and preparedness. Results were not weighted to adjust for biases inherent to proportionalities between larger and smaller departments within these hospitals. Results were not stratified by hospital, so comparisons between the two institutions were not performed. Analyses were restricted to bivariate comparisons; a more comprehensive, stratified understanding of how descriptive variables influence KAPs can be performed in future research, perhaps using multivariate regression.

A very high level of awareness (98.8%) towards LF was recorded among the surveyed health workers. This observation appears to be contrary to a previous finding of a similar 2005 study in Lagos that recorded a low level of awareness (21%) among study subjects [15]. Although the study population had a good knowledge of Lassa fever, there is a general, limited adherence to the universal standard precautionary measures that need to be taken for Lassa fever infection to be avoided amongst health workers in their various health facilities.

The results showing that nearly all of the surveyed respondents (98.8%) knew that Lassa fever could be transmitted by a rat are similar to those in a previous study by Guinean researchers that emphasized the health workers’ belief that LF can kill if not reported in good time [19].

Since the first reported outbreak in Nigeria in 1969, it is well documented that Lassa fever kills a disproportionate number of health workers involved in the management and care of patients in hospital settings. Several health workers have lost their lives to LF at Irrua Specialist Teaching Hospital, prior to the establishment of the Institute of Lassa Fever Diagnostic and Research Laboratory.

This study has highlighted the risk perception, knowledge and attitude of health workers from two tertiary health institutions in Nigeria within the endemic zone for Lassa fever. Based on the findings of the present study, and the importance of the survival of public health workers working with VHFs, we suggest the following: training on Lassa fever for health workers should be paired with appropriate and corresponding training on personal protective equipment.

Standard precautions for Lassa fever are designed to prevent contact between the health care worker and infectious materials. Indeed, the same precautions are used for other highly infectious VHFs, such as Ebola Virus Disease (EVD), and have been promoted outside of those historical VHF endemic areas, which have been transgressed by EVD in West Africa since March 2014.

Funding and consideration for this study was provided by the Nigerian Federal Ministry of Health.

Copyright: © 2015 Adebayo D, et al. This is an open-access article distributed under the terms of the Creative Commons Attribution License, which permits unrestricted use, distribution and reproduction in any medium, provided the original author and source are credited.