In this paper we explore the performance of SONET/SDH & OBS architectures connected as mesh topology, for optical metropolitan networks. Network throughput and protection to link failure. The results are based on analysis of simulations and we present a comparison between OBS architectures (with centralized & distributed scheduling schemes), SONET & NG-SONET. The OBS framework has been widely studied in past days because it achieves high traffic throughput & high resource utilization. A brief comparison between OBS & SONET is studied

SONET & SDH are multiplexing protocols which are used to send the digital bits over the fiber optics cable with the help of LASER or LED. If the data rates could be compensated in terms of speed then it could be transmitted via electrical interface. These are designed for the replacement of PDH systems used for telephonic data and other data over the same fiber optics cable at an improved speed. SONET allowed the user to communicate with different user’s at different speeds i.e. in the asynchronous speed. So it is not just as the communication protocol but also a transport protocol. So it becomes the first choice to work in the asynchronous transfer mode. So they are used widely in the world. The SONET is used in the United States and Canada and SDH is used in the rest of the world [5].

OBS is a kind of switching which lies in between the optical circuit and optical packet switching. This type of switching is appropriate for the provision of light paths from one to another node for many services/clients. It operates at the sub level wavelength and it is designed to improve the utilization of wavelength by quick setup. In this the data from the client side is aggregated at the network node and the sends on the basis of assembly/aggregation algorithm [5].

SONET network architecture made up of 2x2 optical network nodes, interconnected unidirectionally. They have optical add-drop Multiplexers. The higher node allows user to connect to other sub-networks by Wavelength Division Multiplexing. The switching is controlled by electronic logic circuits which are based on packet-by-packet, which is determined only by header processing [1]. 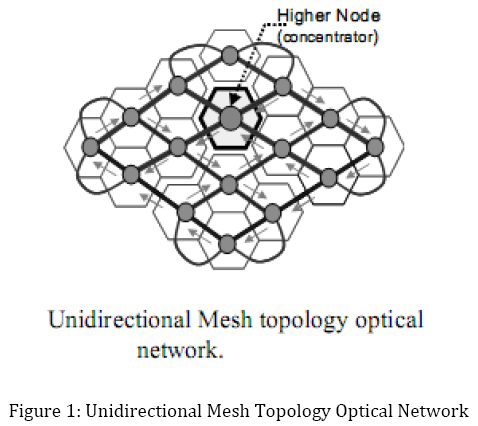 The overall switching time is less than two microseconds for every packet and is independent of payload size. This architecture helps to use the deflection routing to avoid collisions and there is no need for further buffering and thus cost reduces [2-3].

This provides the optical nodes to be operated asynchronously. Our solution is given for MAN access and distribution, having 15km length and networks having less than 48 nodes [2].

Mesh topology is chose for the analysis of throughput and to find the load on each node. The motive is to find which links are more frequently used and should be secured to avoid loss of critical service. These considerations also include the cost parameter.

The total capacity can be given for a network is shown by eq. 1 where, Ħ is the total average number of hops from origin to destination, N number of nodes and S link capacity; the factor 2 is used because each node has possibility of two outputs [2-3].

If we consider Poisson distribution eq., every node generates the uniform traffic to each node and the link is of unidirectional nature. The no. of users in this network is N(N-1).So the capacity can be given by :

If there is any link failure occurs, the network capacity decreases and if there is total links of 2N and m links are failed then the capacity can be given as:

If the network load seems to be Lc and the capacity be Ct then the network throughput can be given as:

To determine the throughput for each destination node and then take an average. Therefore, a general expression for Tp can be written as [6]:

where i = destination node

Tpi = partial throughput to that node

Here we choose the mesh topology MSq-24, MS-32, MSq- 48, with 24, 32, 48 nodes with bit-rate is 4.2 Gb/s, and link length of 15km. Here it is supposed that each node is generating the equal traffic to every other node. Applications can be defined as the total number of packets transmitted from a node to all other connected nodes, and the sum of all applications is the total traffic load on the network. If we consider for the analysis of the protection then we take only single link failure. The SONET network traffic graphs were obtained using the Network Simulator software [6-8].

The throughput for mesh topology is shown in the figure. Here we can observe that SONET performed well in the mesh network and brilliant in the condition of higher number of nodes. From this we can conclude that mesh topology is providing the high capacity without considering the cost of installation. We can see the traffic analysis of MS-24, MS-32, MS-48 and the protocols used in this analysis is store and forward.

Although we know that in the above mentioned technique i.e. Store & Forward, the sent packets have to wait so as to provide them a shortest path for their destination. But it doesn’t matter because here we are just considering the utilization of links and their corresponding distribution of traffic. But ideally we should restrict ourselves to overload the certain links so as to minimize the failures, and we must take decision that where to apply protection mechanisms. 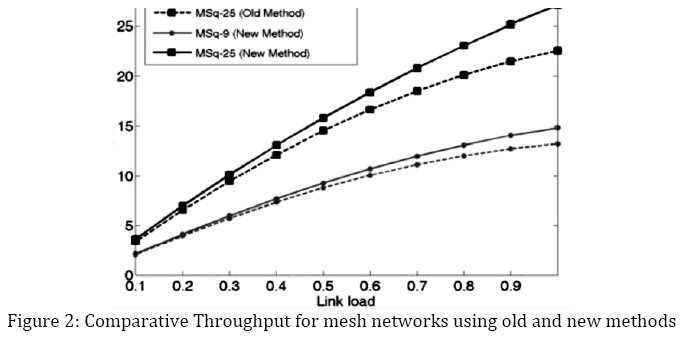 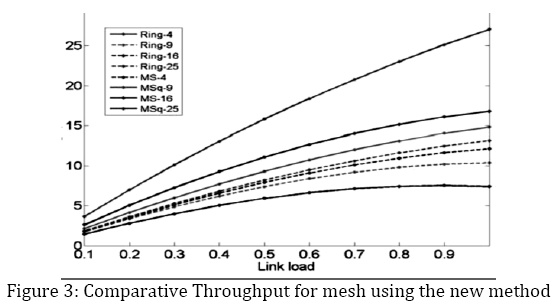 In mesh network, the links which are failed and less used, made a slight change in the performance of the network. The simulations include the MSq-24, MS-32, and MSq-48. We observe that in mesh topology the performance and the throughput reduced but the rate of reduction is almost half as compare to ring topology. In the mesh topology some more facilities are seen like protection of network, location of failure and finally restoration. So all such problems are reduced in the mesh topology.

NG-SONET is another approach which is most recent and in this there is provision of the carriers for optimizing the allocation of bandwidth and uses the unused and fragmented capacity in the SONET ring. It also matches the better client rate. It uses some new protocols to accomplish these tasks such as generic framing for encapsulating data and virtual catenation for using fragmented bandwidth and (LACS) link capacity adjustment for resizement of existing links [9-10]. But it has some drawbacks also which are:-

1. Over provisioning of links in case of Ethernet usage. 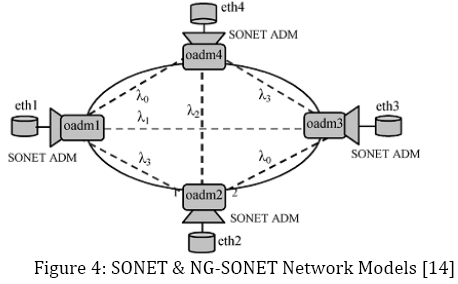 In WR-OBS the control packets are processed at a central node to determine the actual path to send the packets at the destination. The acknowledgements are sent to the source nodes and decides whether these are destroyed or transmit the data bursts. So this technique is best for optimal path selection which in turn gives the congestion control and helps in balancing the traffic over links. It has time delay consists of aggregation time and connection establishment time. It provides less delay than SONET & NG-SONET for low bandwidth links. This is due to the Ethernet packet transmissions are independent of time slot and frames [11-13]. 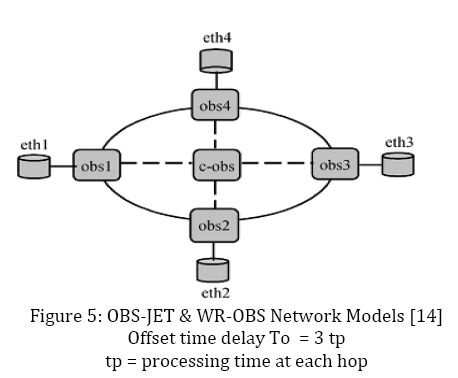 In this an offset time is transmitted before the data burst is sent and processed electronically at each node for preserving the resources for the each data bursts. But the offset time must be carefully chosen so that there should not be problem aroused of queuing and delay problem between the hops [11-13].

It has two types of delays:-

tp = processing time at each hop

OBS is a kind of switching which lies in between the optical circuit and optical packet switching whereas SONET is multiplexing protocols which are used to send the digital bits over the fiber optics cable [5]. OBS has three wavelengths for data and one wavelength for control channel whereas SONET has all four wavelengths available for data transmissions. OBS has data loss due to scheduling contentions while in SONET data loss is due to excessive delays [13]. OBS is of two types Just Enough Time (JET) OBS & Wavelength Routed (WR) OBS while SONET is of one type NG-SONET. OBS is not good for ring model network while SONET works best in ring network. OBS uses deflection routing to avoid contention whereas in SONET there is no such algorithm. OBS uses the forwarding tables for mapping the bursts whereas SONET has no such facility. OBS is preferred for busty traffic whereas SONET is not preferred for a busty traffic [13]. 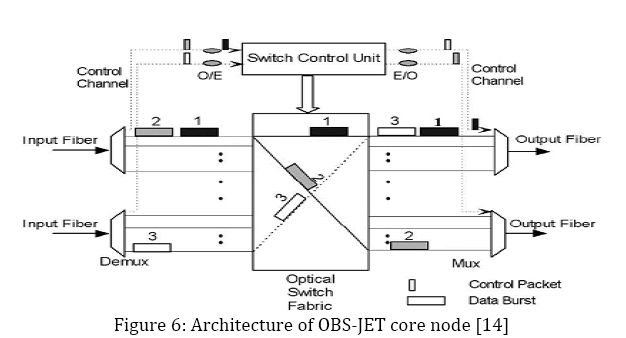 For the future prospects, the OBS will be studied and performance will be observed on the different networks like hybrid networks and other kind of topologies. Also side by side their throughput and capacity will also studied and if found to be satisfactory then the above study will be improved or may be replaced. Along with it in future edge delay analysis in OBS is also be studied for better network throughput and protection in metropolitan networks.