Copyright: © 2016 Pandey DP, et al. This is an open-access article distributed under the terms of the Creative Commons Attribution License, which permits unrestricted use, distribution, and reproduction in any medium, provided the original author and source are credited.

Background: Neuromuscular abnormalities developing as a consequence of critical illness can be found in the majority of patients hospitalized in the intensive care unit (ICU) for 1 week or more. The spectrum of illness ranges from isolated nerve entrapment with focal pain or weakness, to disuse muscle atrophy with mild weakness, to severe myopathy or neuropathy with associated severe, prolonged weakness. The prevalence and impact of acquired neuromuscular weakness is likely larger than generally recognized. Greater than 50% of patients mechanically ventilated for more than 7 days will develop electrophysiologic abnormalities, with 25–33% developing clinically overt weakness. Acquired neuromuscular dysfunction is associated with difficulty in separating from mechanical ventilation, increased hospital costs, and increased mortality.
Objective: This study was designed to investigate the effects of electrical muscle stimulation (EMS) on strength of muscle groups stimulated and gain in functional independence in critically ill patients. Methods: Subjects were recruited among the patient admitted in multidisciplinary intensive care units during the study period. The study employed a randomized single blind controlled experimental study design consisting of two group experimental group (Electrical stimulation group) and control group. The MRC score was used for clinical assessment of muscle strength and barthel index were used to assess the level of independence.
Results: EMS group patients achieved higher MRC scores than controls in knee extensors (left P ≤ 0.01), (right P ≤ 0.01) and ankle dorsiflexors (left P ≤ 0.02), (right P ≤ 0.02).
Conclusions: EMS has beneficial effects on the preserving strength of critically ill patients mainly affecting muscle groups stimulated, it also has beneficial effect on improving the functional independence level post ICU discharge, it can be considered as a potential effective means of muscle strength preservation and early mobilization in this patient population.

Weakness that is acquired during hospitalization for critical illness is increasingly recognized as common and important clinical problem. Weakness acquired in the intensive care unit (ICU) and related acquired neuromuscular dysfunction occur in a large percentage of critically ill patients [1-3] and are associated with increased morbidity and mortality [4,5]. Critical illness polyneuromyopathy (CIPNM) is an acquired neuromuscular disorder observed in survivors of acute critical illness. It is characterized by profound muscle weakness and diminished or absent deep tendon reflexes [1] and is associated with delayed weaning from mechanical ventilation [2] suggesting a possible relation between limb and respiratory neuromuscular involvement. In addition, the syndrome is associated with prolonged hospitalization and increased mortality [3]. The diagnosis of CIPNM requires a reliable bedside muscle strength examination and depends on patient's cooperation and maximal effort [4].

Several risk factors have been identified including systemic inflammatory response and sepsis [5], medications such as corticosteroids [6] and neuromuscular blocking agents [7], inadequate glycemic control [8], protracted immobility [4], hypoalbuminemia [9], Gram-negative bacteremia [9] and severity of organ dysfunction [10]. A very few of studies available suggesting the treatment and prevention of critical illness myopathy these includes intensive insulin therapy, optimal glycemic control and minimized use of neuromuscular blocking agents, high dose and prolong use of corticosteroids.

Objective of the study

Our experimental Hypothesis was that “EMS would beneficially affect muscle functional status and preserve muscle strength in the critically ill patients.

The 212 subjects were recruited among the patient admitted in multidisciplinary intensive care units during the 8 month study period.

Unable to understand or speak English and or Hindi due to language barrier or cognitive impairment prior to admission, unable to independently transfer from bed to chair at baseline prior to hospital admission (based on detail history taken from caregivers.

Patient with known history of primary systemic neuromuscular disease, vascular events, organ transplant, intracranial process that associated with localizing weakness, transferred from another ICU after >2 consecutive days of mechanical ventilation, amputation of lower extremities, any limitation of life support, pregnancy, age under 18 years, obesity, technical obstacles that did not allow the implementation of EMS such as bone fractures, skin lesions and, endstage malignancy were excluded from our study (Figure 1). The stimulator (Unistim, HMS medical system) delivered biphasic, symmetric impulses of 50 Hz, 100 μsec pulse duration, 12 seconds at intensities able to cause visible contractions. The duration of the session was 30 minutes each muscle group. EMS sessions were continued until ICU discharge, both group were getting routine physiotherapy included the passive movements, active assisted movements and chest physiotherapy.

MRC muscle strength scale: The MRC score was used for clinical assessment of muscle strength. After ICU discharge, MRC grading of muscles was on the same day. As soon as patients shifted from ICU level of consciousness adequate to respond to at least three of the following orders ('open/close your eyes', 'look at me', 'put out your tongue', 'nod your head', 'raise your eyebrows') [11].

Three muscle groups in all four limbs were assessed with the MRC scale with values ranging from 0 (quadriplegia) to 60 (normal muscle strength). The following functions were assessed, wrist flexion, forearm flexion, shoulder abduction, ankle dorsiflexion, knee extension, and hip flexion [12]. Patients with an MRC score of less than 48 of 60 were considered the case of ICU induced weakness.

Functional independence: The Barthel index were used to assess the level of independence. After assessing the MMT at least 6 hours but not more than 12 hour rest was given to patient before assessing the barthel score.

Data analysis: All continuous variables were presented by mean. The statistical significance of P value was set at 0.05. One way repeated measures analysis of variance (ANOVA) was made to compare MRC Grading and barthel index score.

Level of independence as assessed using barthel index score were found significant difference between two groups, the mean score of EMS group was 70.80% of 100 and control group was 68.61% of 100 (p=0.01).

The main finding of this study is that daily, 30-minute EMS sessions prevented the development of critical illness associated muscle weakness in critically ill patients. Furthermore, EMS treatment was associated with improved level of independence at ICU discharge, avoidance of known risk factors, including hyperglycaemia, is the only preventive measure proposed so far [12].

To our knowledge, this is the first randomized single blinded control intervention study to suggest that of 30-minute EMS sessions would reduce the risk of development of critical illness associated muscle weakness in critically ill patients. Furthermore, EMS treatment was associated with an improved level of independence at ICU discharge in critically ill patients and preserves the muscle strength as assessed with the MRC score, thus potentially providing a preventive tool for this condition.

Other factors are reported to affect muscle mass in animal models [14], which may have little relevance to human disease. Some factors are likely to have universal effects on healthy subjects and critically ill patients.

EMS has been extensively used as an alternative to active exercise in patients with chronic heart failure (CHF) and chronic obstructive pulmonary disease (COPD) [15]. Many of these patients, even those who are clinically unstable, experience severe dyspnea on exertion, which can prohibit the regular application of conventional exercise training, considered necessary for an integrated therapeutic approach. In a recent systematic review, EMS implementation in most of the selected controlled clinical trials produced significant improvements in muscle strength, exercise capacity and disease-specific health status [15-18].

EMS, as a possible substitute to aerobic and resistance exercise training in severe CHF and COPD patients, has been shown to improve muscle performance, aerobic exercise capacity (Figure 2), and disease-specific health status [9-13]. Figure 2: Showing mean of MRC score of various muscle groups strength of two group which not given electrical stimulated.

Critical illness associated muscular weakness a common complication in patients who are mechanically ventilated due to critical illness. One of major causative factor is resulting from negative effect of bed rest, immobility, inactivity which directly and indirectly affects the muscle protein synthesis and muscle protein breakdown imbalance which is further facilitated by catabolic state in critically ill patients, contributing to development of muscle weakness.

There are various limitations to active exercises these limitations may be resulting from critical illness itself or other major contributing factors such as risk of dislodging of various line and tubes during exercise session, vital status issues and of course use of neuromuscular blocking agents & sedition to facilitate mechanical ventilation (Figure 3). This study suggesting that the use of daily EMS sessions can prevent and slow down the development of critical illness associated muscular weakness in critically ill ICU patients, preserved the muscle strength and improved the level of functional independence post ICU discharge.

Thus potentially providing a preventive tool for this condition, EMS should be considered while clinical reasoning in critically ill patients who requires mechanical ventilation.

EMS is an easily applicable, well-tolerated form of exercise that does not requires patient cooperation, can be applied in any muscle group and can be implemented immediately after ICU admission.

In this study, use of daily EMS of lower extremities was shown to prevent or slow down the development of critical illness associated muscular weakness in critically ill ICU patients preserved the muscle strength and improved the level of functional independence post ICU discharge thus contributing to decreased morbidity, improved mobility and improved independence level post ICU stay.

Further studies are needed to define which patients would benefit most from this intervention and to explore the EMS characteristics (current characteristics and muscle groups) that are most appropriate for this use.

The main limitation of our study is the relatively wide range age group of critically ill patients that were included (Figure 4). 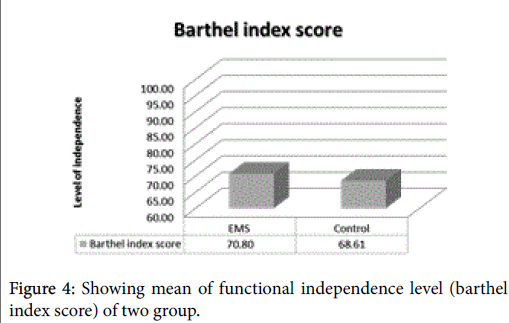 We did not use sham-EMS sessions in patients assigned to the control group.

The effect of EMS was assessed on muscle strength, but not on muscle cross sectional area and also electrophysiological evaluation was not performed, which would have assisted in the evaluation of patients who did not regain adequate cognitive function in order to perform the MRC scale.

Further studies are needed to explore the possible role of EMS as a tool for preserving the muscle strength; the muscle properties and preventing CIPNM in critically ill patients and to define which patients would benefit most from this intervention.

We would like to acknowledge the support of all intensive care unit staff, consultants and all the patient caregivers.

Authors declare that they have no conflict of interest.

This study was self-finance and authors have no financial interest.