In-silico modeling is increasingly being used for simulation of adsorption, distribution, metabolization, and excretion to predict the curve of plasma levels and bioavailabilityof oral drug formulations. Computational models for the prediction of other application routes are less common. Preliminary data shows that GastroPlusTM simulation software appears suitable for prediction of drug plasma levels of inhaled drugs in healthy individuals. Since also the influence of physiological variations on lung deposition can be simulated, this software could be a valuable tool in the screening of promising formulations.

Inhalation is not only suitable for local delivery, but also an ideal non-invasive route for delivery of systemically acting drugs. Due to the small thickness of the air-blood barrier, drugs are efficiently absorbed, enter the systemic circulation and act rapidly. In contrast to the oral route, inter-individual differences in pH, gastrointestinal passage time and dietary complications, extracellular enzymes and metabolization by liver enzymes play no role. An oral dose of 2-4 mg salbutamol is equivalent to 100-200 μg of aerosol applied with pressurized metered dose inhaler (pMDI) [1]. Bioavailability of inhaled small drug molecules is influenced by similar parameters as for oral application, such as molecular weight, solubility, pKa and logP of the active pharmaceutical ingredient. Particle size (mass median aerodynamic diameter), particle density, sedimentation, impaction, diffusion, electrical charge and hygroscopy determine lung deposition, and ultimately, bioavailability of the drug. It is known that only particles physiological parameters. Such parameters include inspired volume, inspiration time, inspiratory flow, breath hold duration and timing of aerosol delivery. Determination of deposition in humans is not easy. Tissue levels cannot be measured directly and detection in bronchoalveolar lavage is unpleasant. Moreover, differences between drug levels in inhaled and exhaled air are difficult to determine and quantification of drug levels on filters placed between inhaler and mouth is actually a measurement of total body deposition, not lung deposition [2]. Deposition measurements, according to quantification in plasma and urine, are drug-specific. Imaging by gamma scintigraphy or Single Photon Emission Computed Tomography (SPECT) measurements are accurate, but also expensive. To warrant these studies, it would be ideal to identify promising candidates by screening. Computer simulations, usually termed in-silico modeling, could play an important role in this screening. By variation of drug parameters and physiological parameters, such programs can be used for the identification of promising formulations and help in the selection of appropriate inhaler types.

In-silico modeling is being used for target validation, selection of biowaivers, and to optimize clinical trials. Another application is the prediction of ADME/Tox (Absorption, Distribution, Metabolism, Excretion and Toxicity). Such programs, until recently, have mainly focused on oral drugs, since metabolization by the liver (first pass effect) has a strong influence on bioavailability. Due to the high importance of particle size, particle sizes are usually determined by in-vitro methods, (mostly the Anderson Impactor). For calculation of lung deposition, several computer programs are being used [3]. These programs include variations of models published by the International Commission on Radiological Protection (ICRP) [4], Multiple-Path Deposition [5], continuous models [6] and local deposition models [7]. Although deposition is the key factor for absorption, it is not equivalent to bioavailability because absorption across the bronchial epithelium is much lower than that across the alveoles. A recently developed module of GastroPlus™ (Simulations Plus Inc.) uses the deposition according to the ICRP model, and combines it with permeation across the involved barriers of the respiratory system, metabolization and excretion. This allows prediction of blood levels and bioavailability of drugs applied by the nasal and pulmonal route. Based on physicochemical drug parameters, deposition in extrathoracic compartment (oral cavity, larynx, and pharynx), large conducting airways (trachea and large bronchi), small conducting airways (bronchioli) and exchange zone (respiratory alveoles, alveolar duct, alveoli, Figure 1) is calculated. Calculations of permeation, metabolization and excretion use data from the oral module of GastroPlus™ to a great extent. 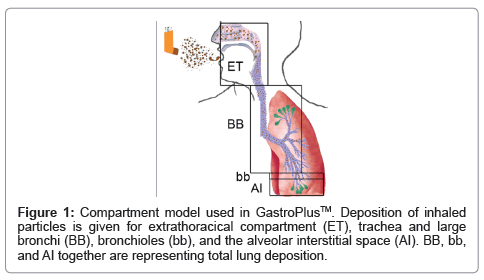 To assess the potential of this software to predict the bioavailability of inhaled drug molecules, budesonide was studied. Budesonide is used alone, and in combination with β2-agonists or bronchiodilators in MDIs, dry powder inhalers and nebulizers (e.g. Pulmicort®, Rhinocort®, Pulmicort® Turbohaler, Seretide® Accuhaler, Symbicort, Ventide® Rotacaps, Pulmicort Respules®). Diseases of the respiratory system, such as asthma, chronic obstructive pulmonary disease and allergic rhinitis, are indications for budesonide treatment. Due to its intense first-pass metabolism and minimal systemic absorption, it is also employed for local treatment of gastrointestinal diseases, such as Crohn’s disease and Colitis ulcerosa (trade name: Entocort®). It is a suitable model substance for validation of absorption by inhalation because contribution to plasma levels by accidently swallowed material is negligible.

As indication for efficacy of inhalative drugs, in addition to physiological effects (e.g. forced expiratory volume in the first second (FEV1) for bronchiodilators), lung deposition, plasma levels and bioavailability is often used. For validation of simulations with GastroPlus™ in-vivo data on budesonide applied by Turbohaler® and published by Thorsson et al. [8] were used. Molecular weight (430.54 g/mol), pKa (13.74), LogP (2.42), solubility (4.57*e-02 g/l), and Mass Median Aerodynamic Diameter (MMAD, 2.9 ± 0.2 μm) were used as input parameters of the formulation. Plasma levels of 3.5 nM were measured in-vivo and GastroPlus™ predicted 3.26 nM, lung bioavailability of budesonide was 32% in humans compared to 40% by simulation. In another publication by the same group, a lung deposition of 27% was reported for these particles [9]. For the calculations of bioavailability and plasma levels, GastroPlus™ uses either deposition from input data or generates deposition by its in-built program. Lung deposition calculated by GastroPlus™ for the tested formulation was 57%. The higher lung deposition is due to the fact that, in contrast to determinations in-vivo, simulations by GastroPlus™ use the part of aerosol leaving the inhaler, and are not able to calculate the amount of drug remaining in the device. Although the predictive value of plasma concentration and lung bioavailability by GastroPlus™ needs verification with other drugs and aerosols, the data on budesonide indicates a potential use in drug development.

To get information on the suitability of GastroPlus™ to test different inhaler types, the influence of different physiological parameters, such as tidal volume and airflow on particle deposition, was studied. Since inhalers are used at different airflows, a good simulation of the resulting different deposition rates could help in the evaluation of formulations. To answer this question, deposition of particles with 1-6 μm diameter was studied. In the first simulation, airflow of 15 L/min was used and tidal volumes varied between 250 ml and 1000 ml. In the second simulation, a tidal volume of 250 ml was used and airflow was varied from 15 L/min-60 L/min. 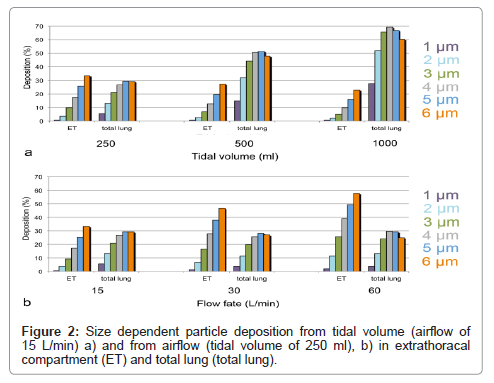 Figure 2: Size dependent particle deposition from tidal volume (airflow of 15 L/min) a) and from airflow (tidal volume of 250 ml), b) in extrathoracal compartment (ET) and total lung (total lung).

The increase of particle deposition for all sizes with tidal volume is consistent with in-vivo data [10]. Greater tidal volumes increase gravitational and diffusional transport, and, thereby enhance lung deposition. When airflow increases at constant tidal volume, loss by higher impactation in the extrathoracic space and large conducting airways is increased, and loss by diffusion and sedimentation in deeper airways due to reduced contact time is decreased. As a result, decrease of deposition for particles <2 μm diameter and increase of deposition for larger particles is expected. Although deposition was more decreased for small particles than for large particles, no increase in large particle deposition with airflow was noted in the GastroPlus™ simulations. This could be due to the fact that the ICRP model used in this simulation software was developed to assess accidental exposure by inhaled substances. Therefore, physiological parameters are more compatible with exposure to nebulizers. With increasing airflow upon forced inhalation, however, the angle separating the two bronchi gets wider and the conducting airways narrower [11]. If the ICRP model does not take this into account, since it is designed for shallow breathing, this may explain the reduced lung deposition also of particles >2 μm..

The presented data shows that lung bioavailability and drug plasma levels simulated by GastroPlus™ corresponded well to in-vivo data in healthy individuals for one application and needs confirmation with other compounds. In addition, GastroPlus™ in general correctly identified changes in lung deposition upon increases in tidal volume and airflow. This suggests that GastroPlus™ could be suitable for identification of most promising candidates for further testing, and thereby, could increase speed and reduce costs in drug development of inhalative drugs.

Copyright: ©2013 Shengqian Wu, et al. This is an open-access article distributed under the terms of the Creative Commons Attribution License, which permits unrestricted use, distribution, and reproduction in any medium, provided the original author and source are credited