Intermittent incidents of arsenic contamination in ground water and the consequent ill health of people from arsenic poisoning or arsenicosis have been widely reported from India.

Despite a plethora of clinical manifestations, a few symptoms of chronic arsenic poisoning that are commonly observed are conjunctivitis, melanosis and hyperkeratosis. In severe cases, gangrene in the limbs and malignant neoplasm have also been observed.

The problem of arsenic contamination in ground-water in six districts of West Bengal, an eastern-Indian province, has already been explored by a number of studies [1-3] conducted by the Department of Environmental studies, Jadavpur University as well as other agencies.

Recently a study, conducted by National Institute of Cholera and Enteric Diseases (NICED), Kolkata, clearly indicated that only 17% of the primary school children of West Bengal had an appropriate nutritional status. On the other hand, about 55% of them were either surviving with malnutrition or were at high risk of developing it as per the guidelines of Indian Academy of Paediatric (IAP) [4].

Environmental sanitation and safe drinking water are the prerequisites for improving their nutritional status apart from ensuring food security & promotion of personal hygienic status. The problem of regular exposure to arsenic contaminated drinking water beyond WHO defined permissible limit is expected to complicate the scenario further for school children in these under-privileged areas.

The study conducted by the School of Environmental Studies, Jadavpur [5], showed that the districts adjacent to the river Ganges along with the adjoining part of Bangladesh are mostly affected with arsenic contaminated ground water due to geo-chemical changes in the soil.

A sizable number of residents including school children of these areas are forced to consume arsenic contaminated water and thereby becoming vulnerable to the problem of arsenicosis.

Basic education & health are the utmost rights of every child, in India at present. Currently, Mid-day meal is provided to the school going children to prevent them from dropping out of school & to improve their nutritional status, as part of improving their growth & development under the school meal programme.

This is due to the fact that many of them do not have the minimum required food in their homes, which forces them to drop out prematurely to seek some job and contributing financially to their family. Considering continuous exposure to arsenic contaminated drinking water, the study investigated the safety of the drinking water sources in selected vulnerable block primary schools of Malda district, where children are continuously under threat and are forced to drink arsenic contaminated water at schools that might affect their health & nutritional status and thereby academic performances also.

This led to 60 water samples collected randomly from 60 primary schools from each of the said blocks. While collecting water samples, standard precaution was taken to remove stagnant water inside the tube wells and following this, about 100 ml water was collected in pet bottle, pre-treated with 1 drop of pure nitric acid to avoid contamination.

All samples were stored in refrigerator (2-8C) and transported to the laboratory of Regional Occupational Health Centre, Kolkata, within 72 hour from its collection for quantitative & qualitative Arsenic testing. Tests were done by Flow Injection Analysis System (FIAS 400) with a method detection limit (MDL) of 0.02 μgl-1. Data was entered & analysed in Epi Info software, version-7.

The study was carried out during the period of January to June 2014 under the financial assistance from Indian Council of Medical Research (ICMR). A total of 137 out of 300 water samples (45.6%) showed presence of excess arsenic content of WHO permissible level for drinking water of more than 10 mgl-1.

Figure 2 shows the number of schools & percentages with level of arsenic content in their drinking water. 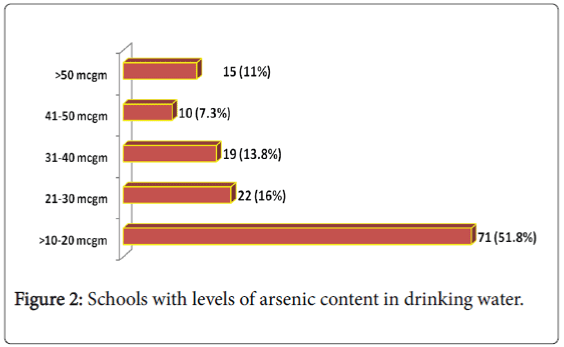 Figure 2: Schools with levels of arsenic content in drinking water. Another alarming scenario was the use of arsenic filters to obtain arsenic free water in some schools. Filters (supplied by the Public Health Engineering Department) didn’t even work in 50% of the schools provided with, giving a false sense of security to its consumers.

This study revealed that 61 schools were provided with arsenic filters and 31 of them had high arsenic content (Figure 4). This is most likely due to lack of proper maintenance and/or regular monitoring of water quality following their installation. Students of 8 schools (out of 137 having high arsenic level in their drinking water) were reportedly suffering from suspected skin manifestations of arsenicosis. This appears to be the tip of the iceberg phenomena and requires thorough investigation with undertaking appropriate management. Apart from India, exposure to arsenic through contaminated groundwater has been a major public health problem in many countries including neighboring Bangladesh [6]. The study revealed the ground reality of regular consumption of arsenic contaminated water by more than 45% of the primary schools students, who were forced to drink it without having any alternative option. Although this study focuses among the school children but this is true for entire population residing at these resource-poor areas. Similar report of arsenic exposure among school children was reported from Bangladesh [7], where public health measures to shift drinking from unsafe to safe wells were attempted to advance good health and education attainment.

In a country where malnutrition, particularly under-nutrition is a major problem (more among children), providing safe drinking water (free from biological as well as chemical contaminants) in underprivileged areas is really needed, which pose to be a great challenge, primarily due to huge financial burden. Greater challenge appears to be regular maintenance of them. People need to be educated to raise their awareness about menace of consumption of arsenic contaminated water and ways of preventing it. It was interesting to note that >50% of the school tube wells provided with arsenic filter didn’t work, probably due to poor or no maintenance of them since installation. Hence, it appears that installation of Arsenic filter without maintenance of them including regular monitoring of water quality is of no use and gives a false sense of security of drinking arsenic free water, which must be avoided. The impact of midday Meal to improve the nutritional status and academic performance of vulnerable students can never be achieved without solving the problem of regular exposure to arsenic as revealed in this study. An appropriate & need-based public health intervention programme must be initiated immediately to save the health & nutritional status of millions of under-privileged children in these affected districts’ population. Similarly, treatment facility for chronic arsenic poisoning is required to be set up at nearby health centers & hospitals with necessary training of treating physicians for handling epidemic of arsenicosis cases as no such facility exists there at present.

We sincerely acknowledge the contribution made by Dr. Sunil Kumar, Director-in-Charge, NIOH, Ahmadabad, for extending laboratory support at ROHC (E) and Dr. Reshmi Arora, Scientist-G, ICMR, New Delhi for her supportive supervision. We also express our sincere gratitude to the faculties & students of all participating schools of Malda District without whose support & cooperation this study would never have been completed.

Copyright: © 2016 Sarkar B, et al. This is an open-access article distributed under the terms of the Creative Commons Attribution License, which permits unrestricted use, distribution, and reproduction in any medium, provided the original author and source are credited.