Copyright: © 2017 Rani ST, et al. This is an open-access article distributed under the terms of the Creative Commons Attribution License, which permits unrestricted use, distribution, and reproduction in any medium, provided the original author and source are credited.

Germplasm comprising of 442 sesame genotypes were evaluated under thermo-stress conditions to identify thermo tolerant genotypes during 2013-14 and 2014-15 at Regional Agriculture Research Station, Polasa, Jagtial, Telangana state. Same set of material was evaluated in non-stress conditions. The material was exposed to thermostress (>400°C) during flowering, capsule formation and seed development for two weeks in 2013-14 and for four weeks in 2014-15. Data was recorded on 25 randomly selected plants from each entry for no of seeds per capsule, 1000-seed weight and seed yield /plant during both years. Thermo-effect was expressed as ratio of stressed/non stressed plants. The effects of thermo stress were lesser in shorter period exposure and more drastic in prolonged exposure of the genotypes to high temperatures. Four entries JCS 2846, JCS 2892, JCS 3102 and JCS 3258 showed maximum seed development and survival. This study revealed that these genotypes can be utilized in breeding programs for development of sesame varieties having thermo-tolerance at reproductive growth and developmental stages.

Sesame is usually cultivated in summer season in Telangana state despite the relatively high temperature that occurs during the growth cycle. Temperatures between 23-27°C encourage a rapid germination, initial growth, and flower formation. High temperature stress is an important constraint to sesame productivity affecting different growth stages specially anthesis and seed filling. It has already been established that thermo-stress can be a significant factor in reducing the yield and quality of sesame. Many publications have repeated that temperatures above 40°C affect fertilization and seed set [1] implying that sesame crops should not be grown in hot areas [2]. Photosynthetic rate is maximum at 23°C to 27°C and decreases abruptly at 30°C to 32°C [3]. Thermo-stress injuries of pollen diminish source activity and sink capacity which results in reduced productivity. When source activity is damaged by thermo-stress results in luxurious vegetative growth in sesame [4]. Similar reports were reported in wheat, grain yield was negatively related to the thermal time accumulated above the base temperature of 31°C [5]. High temperature above 32°C has been reported reducing grain yield and grain weight [6].

In Northern Telangana zone, thermo-stress is a major reason of yield decline in sesame due to delayed planting in summer cultivation. Due to this sowing window is narrowed down. Similarly, thermo stress is a major challenge to sesame productivity in India. Late planted sesame suffers drastic yield losses which may exceed to 40-50%. Therefore, there is a direct need to develop genotypes that are either thermo-tolerant or that mature early without yield losses and thus escape the stress. Thermo-tolerance thus should be essential characteristic of sesame cultivars to be developed. This study was conducted to find out sources of thermo-tolerance in germplasm for utilization in the breeding program.

Sesame germplasm comprising of 442 varieties/lines was sown in both stress and non-stress conditions at Regional Agriculture Research Station, Polasa, Jagtial during year 2013-14 and 2014-15. Each entry was sown in two rows with two meters by maintaining 30 cm between rows and 10 cm between plants. Five to six seeds per hill were placed at the time of sowing and then at 15 DAS after sowing, thinned to single seedling. All other standard agronomical practices were adopted. High temperature stress was created as per the standard procedures. Daily temperature in stress conditions was recorded and maintained above 40°C. At maturity 25 plants from each entry were randomly selected for data recording and data for no of seeds per capsule, 1000-seed weight and seed yield /plant were recorded. Thermo-effects for each character were expressed as ratio of stressed/ non-stressed (relative ratio) and for each variety/line as relative value (mean of ratios of all entries for the characters studied). The capability to set seed/survival under high temperature stress for a longer period was regarded as thermo-tolerance.

As far as population behaviour is concerned during both the years 2013-14 and 2014-15, when the material was exposed to thermo-stress, the relative ratio for the characters studied i.e., no of seeds per capsule, 1000 seed weight and seed yield per plant were normal (Figure 1). 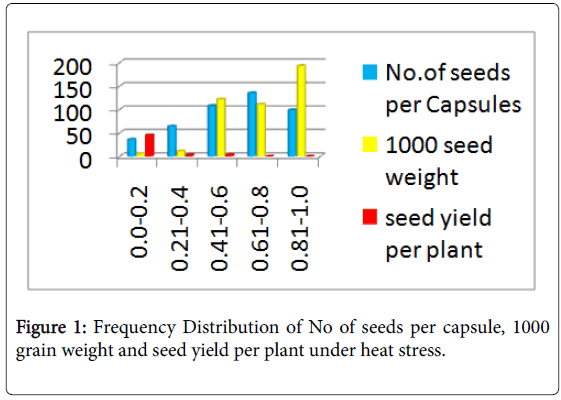 Figure 1: Frequency Distribution of No of seeds per capsule, 1000 grain weight and seed yield per plant under heat stress.

Four entries JCS 2846, JCS 2892, JCS 3102 and JCS 3258 have shown relative value and relative ratio for each character near to unity when exposed to thermo shock (Table 1). Entry numbers JCS 3102 and JCS 3258 have shown better relative ratio for yield and over all relative value by maintaining seed no and seed weight to certain extent. However, the three entries JCS 2846, JCS 2892 and JCS 3102 were able to remain green for two weeks under thermo-stress but entry numbers JCS 3258 was not able to remain green under thermo-shock and thus was forced to maturity as it is evident from the study that it maintained its seed number. However, its seed weight was reduced more than 50% under prolonged thermo-shock. This indicated that prolonged exposure to thermo-shock at seed development phase have severe effects on seed weight [6].

Thermo-shock affected all the three characters when thermo-stress was applied. Only few entries survived and none of these showed normal seed weight. Seed yield per plant was also much affected under thermo-shock, because there is no chance of recovery or escape. So, the yield in case of all the entries was drastically affected. Similarly, negative effects of heat stress on yield were reported [7].