ISSN: 2153-0777
Journal of Bioengineering and Bioelectronics

Copyright: © 2016 Khunnam W, et al. This is an open-access article distributed under the terms of the Creative Commons Attribution License, which permits unrestricted use, distribution, and reproduction in any medium, provided the original author and source are credited.

Visit for more related articles at Journal of Bioengineering and Bioelectronics

An electronic amplifier device is recognized as the most important device for signal recovery in long distance transmission [1,2]. Basically, such a device can be constructed in various types and forms, from which the same specification is the signal amplification, where the other properties such as bandwidth, response frequency, size, and materials etc. are also included. Nowadays, the large demands of using the small scale device within the scale of few micrometers have the key issue of device fabrication, which has shown the rapidly developed. Recently, a group of researchers has shown the very interesting concept of signal recovery that can be formed by using the small scale device [3,4], where the light signal in the form of a photon (coherent light) can be functioned as self-pumping (recovery) within the small circular-like path propagation. In operation, a device can be constructed by using materials such as metal (gold or silver) or semiconductor, from which the nonlinear effect can be applied by built-in or external sources in the forms of light, photon, spin, polarization, magnetic field, mechanical force and thermal energy. The nonlinear effect is introduced into the device and the self-pumping characteristics can be obtained, which can be used to form the amplifier, i.e. repeater.

In manipulation, the nonlinear effect can be induced by the two nonlinear coupling materials, where in this case is formed by a material such as a graphene or AlGaAsP/InP, which can be described by the following equations. The real part of the signal function will be degraded (decayed) within the device due to the waveguide lost. The pumping signal by mean of self-pumping can be obtained by the imaginary term, where the resonant signal is required to optimize the pumping output signals, furthermore, the phase compensation is also obtained, which is called signal recovery (Figure 1), the device structure is consisted of a center ring, with a radius within the range of 2-30 micrometers, where there are four ports called Input, Through, Drop and Add ports. The nonlinear effect can be generated by the two nonlinear side rings or external coupling source. Such a device called a Panda ring resonator [5], in which the major characteristics is the nonlinear effect introduced into the center ring, the two ring radii are 1-2 μm. The centering can be formed by the metallic or semiconducting devices. The required signal amplification is input into the self-pumping device via the Input port, which is normally weak signal and circulated within the system. The pumping signal is input into the system via the Add port, where the pumping mechanism is formed by the two side rings, where in this case the used material is graphene. The achieved output signal is the pumped or amplified signals that can be used and linked the long distance link in the network. Generally, the input signal depends on the device and pumping materials, which can be soliton, electron, spin wave, plasmonic wave or any particle contents, in which the basic characteristics is the nonlinear effect. 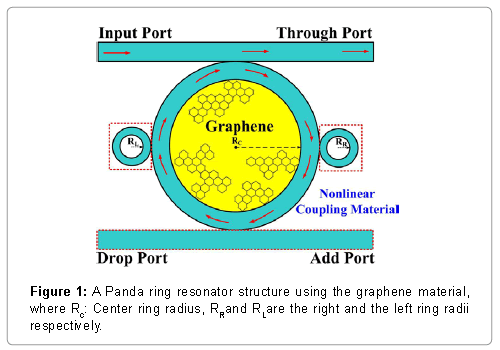 The device model is as shown in Figure 1, the input signal can be formed (input) by a weak signal that is required the amplification while the pumping signal can be a soliton and input via the Add port. The self-pumping or self-recovery is principally generated by the particle oscillated by the two-level atom called Rabi oscillation [6], therefore, the suitable input source and device parameters can introduce the required oscillation, from which the weak input signal can be pumped and oscillated within a period of time without the re-pumping or recharging requirement. The description of Rabi oscillation mechanism can be described as following equations [4].

In an Equation 1, a soliton signal (ψ(t)) is given to be a timedependent form of signal and input into the device via Add port, which in general can be a form of light, soliton, electron etc., which will be degraded after travelling within a device for a period of time, therefore, the pumping is required, where in this case, the self-pumping is recommended. From Equation 2, the nonlinear effect is induced by the two side rings or external source, which is represented by the phase term [φ(t)], while Equation 3 is the time-independent term, which can be configured as the input signal via the Input port.

Generally, they can be used either metallic or semiconductor, but the principle of them is different, from which the WGMs can be generated by spin wave or photon respectively, which depends on the requirements and applications. Theoretically, the amplified signal can be reached 100%, but in practice the amplified power of 80% is enough for the next round applications. The input for the first round is the original signal, from which the amplified mechanism will be required for the next round use. The system is needed the other input via the Add port for initial amplification, which can lead to have 80 of the original input signal. The self-pimping is the self-amplification, which is analogous to the Rabi oscillation, in which the external pumping source is not required for a period of time.

In conclusion, we have proposed the signal repeater based on Rabi oscillation, which has become the challenge device for a signal amplifier, in which the weak signal can be recovered and amplified by the self-pumping concept. In this case, the device is formed by the small scale circular-like path, which is known as a Panda ring resonator. The advantage is that the dual properties makes the graphene is become the useful material for both electronic and optical device applications [3]. Moreover, the input signal can be in general forms such as soliton, electron, spin wave, plasmonic wave or any particle while the device material can be metal or semiconductor, which can be input into the device and amplified, from which the self-pumping can be existed for a period of time. The novelty is the grapheme material has dual behaviors, which are the polarizability and mobility that can be functioned in either electronic or magnetic device applications by a single device. This device is also available for biochip and bio-sensor applications, where in Figure 2, the output of the proposed device is formed by a conic beam output that can be used to be a beam collector or accelerator. Such an output is generated by the squeezed photons [7], which is known as a whispering gallery mode (WGM) [8] that can be used to form the optical or magnetic probe (tweezer) [9]. The proposed model can also be is useful for the molecular storage, accelerator, imaging, sensors, tissue culture, microsurgery applications. 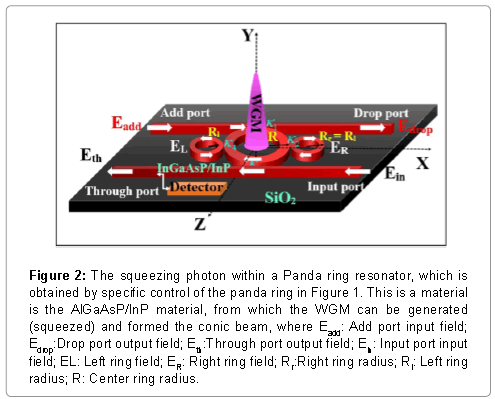 The authors would like to give the acknowledgment for all facilities from Kasetsart University, Bangkok 10900, Thailand.