Copyright: © 2017 Harish GV, et al. This is an open-access article distributed under the terms of the Creative Commons Attribution License, which permits unrestricted use, distribution, and reproduction in any medium, provided the original author and source are credited.

Infant reflux becomes evident in the first few months of life, peaks at 4 months and resolves in up to 88% by 12 months and in nearly all by 24 months. Infantile reflux manifests more often with regurgitation, signs of esophagitis and resulting failure to thrive. We report the case of two months old male child with GERD with non-resolving pneumonia only relieved after surgical intervention.

Gastroesophageal reflux is defined as the passage of stomach contents into the esophagus with or without regurgitation (spitting up) and vomiting. It is a normal physiologic process that occurs throughout the day in infants and less often in children and adolescents [1].

For healthy infants, GER episodes usually occur postprandial and last for less than three minutes. To pediatricians, the most noticeable symptom is regurgitation occurring daily with most infants aged less than three months. This symptom is usually resolved by the age of 12 months. The disease that might develop secondary to persistent GER is referred as GERD. To avoid diagnostic testing and unwanted medication, determining GERD from GER is essential.

A two months old male child presented with fever, vomiting, cough, difficulty in work of breathing and one episode of seizure. Child had a past history of pneumonia 1 month back and admitted in a private hospital for 10 days. Birth history of child was nil significant. On examination, there was pallor and generalized rash with blanching over the body. Downes score observed was 7/10 [RR: 78, Audible grunt, severe retractions]. The following vitals were recorded, Temperature: 100°F, Pulse: 160/minute, Respiratory rate: 78/minute and SPO: [2] 81% with O2. As the respiratory distress was severe, child was intubated and connected to mechanical ventilator. Child was started with IV fluids, antibiotics [INJ. Meropenem, Vancomycin, Netilmicin], Antiviral [INJ. Acyclovir], antiepileptics and other symptomatic medications were administered. Child was investigated with CBP showing microcytic hypochromic anemia with relative neutrophilia and reactive thrombocytosis (Figure 1). 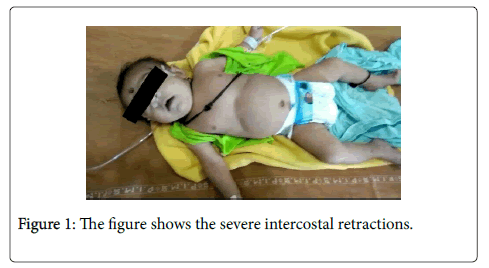 All other routine investigations were normal, X-Ray chest showing homogenous opacification in upper and middle lobes and air space filling with numerous air bronchograms (Figure 2). All other investigation were normal [3]. USG Abdomen done which showed grade IV GER. Child was further investigated with X-Ray gastrograffin swallow in view of recurrent cough and regurgitation showing Grade IV GE reflux (Figure 3). Paediatric surgeon opinion was taken who suggested GER surgery and child was posted for surgery. In view of low Hb levels 1 unit of PRBC was given and laparoscopic fundoplication was done under GA. Post operatively child was shifted to PICU and kept for NBM for 48 h (given NG feeds) later allowed oral feeds for which child tolerated well and was observed for 48 h Postsurgery, child was accepting feeds well with no history of any cough and regurgitation of food contents. Immediate imaging is required in the case of progressive worsening projectile vomiting for infants in the first few months. In some cases, surgical referral is seldom suggested. Either GERD or more concerning Pathology is suggested in the case of Regurgitation or recurrent vomiting beyond eighteen months. Few other symptoms leaning to GERD are poor weight gain, abdominal pain reported by parent, choking or coughing while feeding. In the first few months, bilious vomiting might suggest intestinal obstruction. Further workup is required for Gastrointestinal bleeding [6-8]. In some cases, infantile torticollis is caused from sandifer syndrome (lateral head tilt alongside contralateral chin rotation), which could attribute to GERD.

Choking, change in muscle tone, apnea, color change are common attributes to GERD, lower respiratory tract infection and seizures. Hospitalization and thorough investigation is required before diagnosing the above symptoms as GERD.

If symptoms still prevail after acid suppression therapy, treatment failure should be evaluated by diagnostic testing. These atypical symptoms can then be attributed to GERD and we can exclude other possibilities upon diagnostic testing. Upper endoscopy with biopsy is considered when reflux does not respond to initial treatments [9]. It is the principal method of evaluating the esophageal mucosa for complications of GERD and excluding other possible causes, such as eosinophilic esophagitis, esophageal webs, and infectious esophagitis. Esophageal pH monitoring is the most widely used test to quantify the frequency of reflux over 24 h using the reflux index. Increasingly, pH monitoring is combined with multiple intraluminal impedance to evaluate GERD [2,4]. Multiple intraluminal impedance plus pH monitoring is considered superior to pH monitoring alone because it can differentiate acidic, weakly acidic, or nonacidic reflux; identify solid, liquid, or gas reflux; and better determine the temporal correlation between reflux and atypical symptoms. The high cost, high inters observer variability, and the lack of well-designed studies supporting its diagnostic accuracy limit its use [10].

A barium study (upper gastrointestinal series) is useful for evaluating for anatomic causes of symptoms, particularly dysphagia and odynophagia, and bilious vomiting. It should not routinely be used to diagnose GERD or assess its severity [11].

For severe GERD cases with unsuccessful medical therapy or nontolerable medical therapy, surgical treatments options are available and are often considered. These options include complete or partial Nissen fundoplication. Newer endoscopic approaches performed in adults have been studied in children. Surgical treatments have significant risk of reflux recurrence and should be considered carefully.

GERD in infants mostly present with gastrointestinal symptoms (regurgitation, vomiting’s, Failure to Thrive) but in some cases with severe GERD may present with recurrent respiratory tract infections (in this case with respiratory distress, and non-resolving pneumonia which requiring surgery for survival). To reduce morbidity and avoid more serious complications, attention must be given to early recognition of severe GERD and its surgical management.