Shale Formation: What Do We Learn about Fracture Conductivity Damage?

Copyright: © 2017 Xiao J. This is an open-access article distributed under the terms of the Creative Commons Attribution License, which permits unrestricted use, distribution, and reproduction in any medium, provided the original author and source are credited.

To effectively detect the fracture conductivity damage in shale formation, four methods are most deployed: production data comparison, well testing and pressure-transient analysis, and laboratory testing and wellbore examination. Lab testing is simple one. Reservoir cores with hydraulic fracturing fluids are tested under simulated reservoir conditions, including the in-site stress, pressure, temperature, and treatment parameters. The responses of reservoir cores can be used to evaluate the effectiveness or potential fracture damage in field operations. Wellbore examination is usually done through analysis on production logs an down hole video images [20-23]. As discussed above, the clay minerals in shale formation can cause formation damage to shale formation and therefore poise damage on fracture conductivity damage. Shale formation is very sensitive to aqueous fluids and hydraulic fracturing fluids tend to weaken shale formation. According to some studies, the fracture face matrix damage depends on properties of reservoir and properties of fracturing fluids. Properties of reservoir include porosity and permeability. The properties of fracturing fluids include its leak-off coefficient, spurt loss coefficient and viscosity [24-27]. Properties of shale formation determine the vulnerability of formation damage, while fluid properties controls the degree of the formation damage. Proppant embedment and deformation, is another significant damage to fracture conductivity. It reduces the fracture aperture and the crushed proppant hinder the flow path of hydrocarbon. Low Young’s module or Brinell hardness often leads to high embedment damage and more fine productions.

Mechanisms of fracture conductivity in shale formation can be due to clay swelling, fines migration, proppant diagnosis, proppant crushing, and proppant embedment. Those impairment mechanisms differ from one formation to another, and depends on many variables, including mechanical properties of shale formation, mineral content, temperature, proppant type, type of fracturing fluids and closure stress [28]. The stability of fracture conductivity in shale formation depends on transport processes, physical change and chemical change. Those processes are affected both by mechanical forces and physic-chemical forces. Mechanical stresses refers to the pore pressure, overburden and lateral stresses, and the cementation bond stresses at inter granular point. Physic-chemical forces are the result of hydration and solution of clay minerals in shale formation. The forces are Born repulsion, the van der Walls attraction, and the hydration or swelling stress. The most commonly used proppants are sand, beramic beads, resin-coated sand, and sintered bauxite. When the fracture walls close, the desirable proppant must be transported far down a created fracture surface. It depends on proppant setting, proppant transportation, and proppant diagenesis. Proppant must be chemical inert so that do not dissolve over the life of the fracture wall. Proppant should also be strong enough to not be crushed under the force of closure stresses [29,30]. Compared with consolidated sandstones, shale formation maintain low elastic module and embedment of proppant (Figure 1) is severe. Studies show that it can reduce from 10 to 60% on fracture conductivity. And 20% reduction in fracture aperture can lead to more than 50% reduction in recovery factor [31]. Studies found that 88% of undamaged shale fracture conductivity is lost after water flows across the fracture surface due to the softening effect of shale surface. The average embedment depth is almost 50% of the median diameter. It is always better to take preventive measures than to remediate it. However, if the fracture conductivity damage occurs, some remediation can be taken [32]. Firstly, an effective remediation strategy should consist of treatment selection and design, treatment field testing, and routine field wide treatment applications. Then tasks are carried out to remediate fracture conductivity damage (Figure 2). 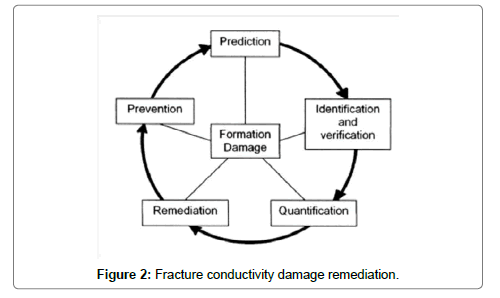 a) Fracture conductivity damage in shale formation can occur through multi mechanisms.

b) To minimize potential fracture conductivity damage in shale formation, the fracturing fluids and proppant type need to be optimized before any field treatments.

c) It is always better to prevent damage than to remediate it. However, optional remediation actions should be taken after damage on fracture conductivity has occurred.