Copyright: © 2016 Turner J, et al. This is an open-access article distributed under the terms of the Creative Commons Attribution License, which permits unrestricted use, distribution, and reproduction in any medium, provided the original author and source are credited.

The use of computed tomography colonography or virtual colonography (VC) is gaining acceptance as a screening modality for colon cancer. A comprehensive understanding of VC complications is limited. We report a case of colon perforation in a patient where a colon cancer was diagnosed using VC colonography with manual insufflation. A 79-year-old patient underwent a VC after a failed screening optical colonoscopy (OC). The initial radiological findings included a large amount of mesoperitoneum and retroperitoneal air near the proximal sigmoid and a left inguinal hernia containing the distal sigmoid colon suggesting a colonic perforation caused by colonic obstruction. Subsequent radiological interpretation revealed a 1.5 cm lesion in the posterior cecum. The patient underwent repair of the hernia, sigmoid resection for sigmoid perforation, followed by intra-operative colonoscopy (which confirmed the radiographic findings of a cecal lesion) and right colectomy. Pathologic examination confirmed the T3, N0, MX adenocarcinoma.

CT colonography also referred to as virtual colonoscopy (VC) was first described in 1994 [1] and its use as a screening modality for colon cancer is controversial. It is an evolving radiological study that, is considered a safe alternative to screening optical colonoscopy (OC). A distinct advantage of OC is that it does not require sedation and may provide additional information regarding extra-colonic abdominal findings. With increased employment of this technique, we will have a better appreciation of the associated complications.

due to tortuosity of the sigmoid colon. At the time of the initial OC, there was no appreciation of an inguinal hernia. Subsequently, a screening VC was planned a month later. The patient completed a bowel preparation and VC per standard institutional protocol (which included manual insufflation of carbon dioxide at the time of the study). After the scan was completed, the radiologist was able to identify a colonic perforation as a result of a bowel obstruction. Findings include a large amount of air within the proximal sigmoid mesocolon and the retroperitoneum (Figure 1), extensive sigmoid diverticulosis, and a moderate left inguinal hernia containing omental fat and distal sigmoid colon (Figure 2). The patient was hemodynamically stable with an abdominal exam that revealed a distended, non-tender abdomen and a large non-reducible left inguinal hernia. An emergent laparotomy was performed. Intra-operatively, we identified the site of perforation at the sigmoid colon and extensive pneumatosis around the proximal sigmoid colon and its mesentery. There was minimal stool spillage. The distal sigmoid colon was incarcerated, without evidence of gangrene or necrosis, within a left inguinal hernia. We repaired the hernia with native tissue without mesh and perform a sigmoid colectomy to include the site of perforation. 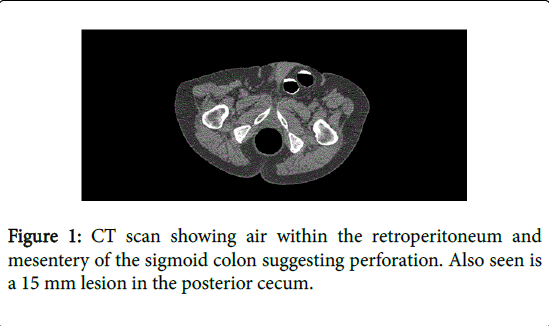 Figure 1: CT scan showing air within the retroperitoneum and mesentery of the sigmoid colon suggesting perforation. Also seen is a 15 mm lesion in the posterior cecum. 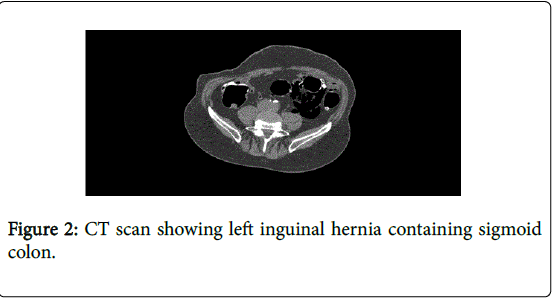 During the operation, the reading radiologist updated the operating surgeon of an additional finding of a suspicious 15 mm cecal lesion in the posterior cecum (Figure 1). To confirm this finding, an on-table lavage followed by an OC was performed with difficulty due to an inadequate mucosal visualization. A decision was made to perform a right colectomy based on the appearance of the lesion.

The patient was discharged without any major post-operative problems on post-operative day 7. The final pathology revealed a 1.3 cm invasive, poorly differentiated adenocarcinoma of the cecum. Margins were clear both proximally and distally (12.5 cm and 11.5 cm respectively). Nineteen lymph nodes were harvested and were negative for tumor spread, for a T3, N0, MX tumor stage. The patient underwent a follow-up colonoscopy, which did not reveal any additional lesions three months after his discharge.

VC is growing in acceptance behind the gold standard of endoscopy for screening and detecting colon disease. At the time of this study, our institutional protocol for CT colonography included prepping the patient with oral contrast (60 ml of gastrograffin and 250 ml of 2% barium) the night prior to the study. The CT colonography is performed with a spiral 64 slice ToshibaTM CT System without intravenous contrast. A total of 1206 slices (519 supine position and 571 prone position) were taken of our patient at 1.0 mm cuts. Rotation time for each slice was 0.5 seconds. Re-insufflation was performed between each scan with an eleven minute delay between scans. Our patient only underwent two scans (supine position and prone position) with a radiation dose of 13.6 mSv after conformation of adequate imaging by a radiologist. (As a comparison, two views of a plain chest radiograph can be up to 0.25 mSv [2]. Additional (left lateral decubitus and right lateral decubitus) positions may be needed with some studies to better evaluate various parts of colon at its maximal distention.

Patients should undergo a bowel preparation before VC. The bowel preparation before VC is to make sure solid stool, which can interfere with the interpretation of the results, is expelled. However, the stool does not have to be as clear as the preparation needed for visibility during OC [4]. Therefore, an adequate preparation for VC may not be adequate for OC. This was noted in our patient when an attempt of an intra-operative OC was performed after a VC. Although the preparation was adequate to enough on VC to detect a lesion, a colonic lavage as needed in our patient to adequately examine the mucosal surfaces during OC. When an adequate prep for VC is performed, the overall specificity and sensitivity for detecting polyps high at is 92.8% and 100% respectively especially with polyps over 10 mm [5,6]. A disadvantage to VC is the need to subsequently perform an OC for confirmation and possible intervention of identified pathology such as a polyp, lesion, or mass.

VC is not without risks. To date there are no deaths reported from the use of VC. However, the most serious complication reported is perforation often leading to surgical intervention. Sosna et al. retrospectively studied 11,870 patients that undergone VC. Seven cases of colonic perforation were noted after VC yielding a perforation rate similar to other studies of 0.02%-0.08% compared to a 0.01 to 0.3% perforation rate noted with OC [3,7,8]. Over half of the cases were following incomplete OC. Perforation sites included the sigmoid (71%) and rectum (29%). Fifty-seven percent of the perforations had a left sided inguinal hernia containing sigmoid colon as a cause of obstruction after carbon dioxide insufflation [2].

While OC is the gold standard for screening and surveillance for colon disease, VC is an excellent alternative for incomplete OC or for high risk patients that should refrain from sedation and insufllation. However, VC is not without risk. We have reported a case of pneumatosis and perforation after VC. We suspect that the presents of an inguinal hernia causing bowel obstruction and manual insufflation increased the risk of perforation in our patient. A comprehensive understanding of VC complications is limited due to under-reporting and paucity of studies. Better understanding about the technique of VC, its benefits, as well as its risks will come into light as the use of VC increases.