Copyright: © 2016 Ognibene N, et al. This is an open-access article distributed under the terms of the Creative Commons Attribution License, which permits unrestricted use, distribution, and reproduction in any medium, provided the original author and source are credited.

We report clinical details and imaging findings of a case of subcapsular liver hematoma (SLH) occurring as incidental finding in a newborn with scrotal hematoma. We present this case to alert that SHL should be added to the list of differential diagnoses of neonatal liver lesions, despite the lack of associated risk factors.

The hepatic subcapsular hematoma (SLH) is a rare complication in newborns, in fact, the diagnosis is often delayed. The SLH is commonly associated with trauma, coagulopathies, hypoxia, maternal diseases and placental lesions.

The systemic, non-specific symptoms such as anemia, pallor, tachycardia may be followed by sudden circulatory collapse and subsequent rupture of the hematoma or hemoperitoneum, hemoretroperitoneum.

We describe the sonographic findings of a subcapsular hematoma of the liver in a full-term neonate without any risk factor presenting a scrotal hematoma.

A full-term male neonate was hospitalized at the Department of Gynecology and Obstetrics of Policlinic Careggi of Florence, showing a clinical picture of acute scrotum on the first day of life.

He was born after a regular pregnancy and delivery with birth weight of 3,320 g. When he was 9-days-old the baby was urgently sent to the Neonatal Intensive Care of Meyer Children's Hospital of Florence, with clinical suspicion of acute right testicular torsion.

An ultrasound examination (US) of the inguinal-scrotal region, which appeared swollen and hyperemic on the right, was performed. US findings did not suggest testicular torsion of the right gonad but showed a scrotal wall haematoma (Figure 1). Figure 1: Sagittal (A), transverse (B) images demonstrate heterogeneous and thickened scrotal wall that represents scrotal wall hematoma. Note that the right testicle is itself intact.

The US examination was extended to the abdomen, demonstrating a large, hyperechoic, complex mass that appeared to displacing and occupying part of the liver, particularly superiorly. This appearence was suspicios for subcapsular liver hematoma (Figure 2). The remainder of the abdomen appeared normal. Figure 2: Sonographic images of the liver. Sagittal(A), transverse (B) image of the right lobe of the liver showing a large, hyperechoic, complex mass that appeared to displacing and occupying part of the liver, particularly superiorly. This appearence was suspicios for subcapsular liver hematoma. Note that the remainder of the livers appears normal.

The haemoglobin level was 9.3 g/dl with a normal platelet count and coagulation profile. Follow-up sonography of the liver, 6 days later, showed that the mass was less echogenic, presumably owing to hemolysis and it decreased in size over the next 6 weeks (Figure 4). 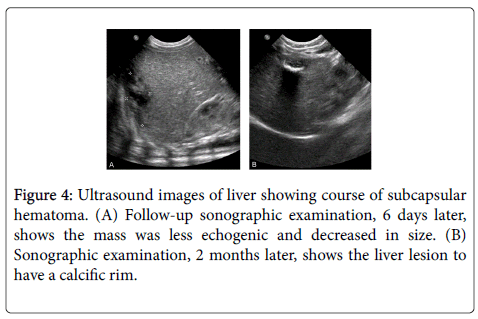 The baby was managed with supportive care, he recovered uneventfully and his clinical condition improved gradually. The coagulation studies performed to the child did not show any coagulation alteration associated and he did not need intravenous iron infusion.

We describe a case of diagnosed subcapsular liver hematoma (SLH) detected in a full- term neonate born after an uncomplicated pregnancy and delivery, without a history of fever or coagulopathy. His mother denied any antecedent abdominal trauma or/and any trauma during the delivery discarded.

The case presented a diagnostic dilemma. This mass appeared to indent the liver parenchyma, without signs of infection or free fluid abdominal collection. No bowel dilation or hyperperistalsis were detected.

We came to a tentative diagnosis of SLH based on the location and the ultrasound characteristics of the mass. It arose just below the dome of the diaphragm, extending down the peritoneal surface of the right lobe of the liver, with an echogenic border and complex internal echoes consistent with an organizing hematoma.

SLH is a collection of blood under the Glisson capsule.

Although autopsy series have demonstrated an incidence rate of up to 15%, the lesion is clinically less distinguished [1].

There are three major causes of hepatic injury in neonates:

• obstetrical causes such as difficult labor, early travail and a breech presentation;

• neonatal causes such as hepatomegaly, coagulopathy, resuscitation, prematurity or post-maturity;

• maternal causes such as eclampsia and an elderly mother [1-4].

The symptomatology of a hematoma in a neonate includes poor feeding, listlessness, pallor, jaundice, tachypnea and tachycardia; these findings could be indicative of a hemoperitoneum.

It is interested to note that our patient is a stable baby with incidentally diagnosed SCH during ultrasound examination performed to exclude testicular torsion. In literature, there is only one similar case [5] describing stable baby with unexplained pallor alone as the clinical manifestation.

Initially, we thought that the SHL was unrelated to haematoma in the scrotum.

As Lee et al. [6] report in their study, the SHH at the inferior segment of the right liver is usually associated with intraperitoneal hemorrhage and blood, through the patent processus vaginalis, can cause hematocele; however a fluid collection was not highlighted by ultrasound. Instead, rupture of the SLH in the postero-superior region of the liver, as in our patient, would be expected to result in a retroperitoneal hemorrhage and the resulting scrotal wall haematoma.

Abdominal ultrasound is the investigation of choice because it can delineate the lesion well, differentiate it from neoplasms, rule out rupture and aid in serial follow-up [7].

Hematoma may also be the result of bleeding into a vascular malformation or a neoplasm such as hemangioendotheliomas, neuroblastoma metastases, mesenchymal hamartomas of the liver and hepatoblastoma [8].

In our patient, thanks to the appearance of the hemorrhagic lesion at the ultrasound examination, tumor was thought to be less likely. However, we decided, for improved safety in diagnosis, to perform an MRI.

Management is mainly conservative, while surgery is reserved for rupture of the hematoma into the peritoneum or for infants who fail to respond to conservative management.

In summary, we present a case of a newborn with an SHL, which was idiopathic in etiology. We present this case to alert others pediatric radiologists that SHL should be added to the list of differential diagnoses of neonatal liver lesions, despite the lack of associated risk factors.