Copyright: © 2013 Xie G, et al. This is an open-access article distributed under the terms of the Creative Commons Attribution License, which permits unrestricted use, distribution, and reproduction in any medium, provided the original author and source are credited.

Metallic glasses exhibit unique combination of physical, chemical and mechanical properties due to their amorphous nature which lacks long range order and defects such as grain boundaries and dislocations [1,2]. In the past two decades, they have been rapidly developed for application in many fields. However, the disadvantages such as poor plasticity and limited dimensions hamper their large-scale industrial applications [3,4]. The most common method to improve plasticity of the monolithic bulk metallic glasses (BMGs) is to produce glassy composites by introducing nano- or micro-scale crystalline phases into the metallic glassy matrix [5-9]. On the other hand, intensive efforts have been made to overcome dimension limitation. Powder metallurgy process is an alternative route to produce large-size metallic glassy alloy parts. It is also favor to fabricate the glassy composites by dispersing crystalline particulates into the glassy matrix. Spark plasma sintering (SPS) as a newly developed rapid sintering technique, has a great potential for producing glassy composites while crystallization of the glassy alloy and coarsening of the dispersed particles are avoided. Furthermore, it is also a type of solid-state compression sintering technique which is similar to hot pressing sintering process, so that the sintered samples with the large-size and complicated shape can be produced [10,11].

In this paper, a short review on history of the technology, features of the spark plasma sintering process, and present status for application to develop large size bulk metallic glasses and their composites is presented.

The pioneering works related to the SPS process started in 1906 when the first direct current (DC) resistance sintering (RS) apparatus was developed by [12], subsequently carried forward by [13] and [14,15]. In Japan, based on the idea of using the plasma on electric discharge machine for sintering metals and ceramics, a similar process was developed and patented in the early 1960s by [16,17]. However, because of the lack of application technology at that time, limited fields where it could be applied and unsolved problems associated with industrial production, equipment cost and sintering efficiency, it was not put to wide use. There was little literature on investigation of the SPS process until the latter half of the 1970s. In the late 1980s, the patent expired, and various companies utilized these techniques to manufacture equipments. However, these equipments were only smallscale experimental systems, used mainly for new materials development. From the beginning of 1990 to now, the SPS process has been developed to the third generation. The use in the fabrications of large-size gradient and composite materials as a new industrial processing technology has been conducted [11]. 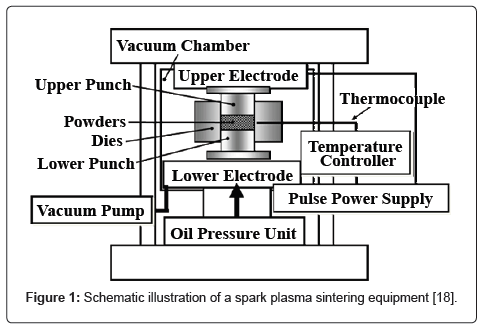 In the SPS process, the pulse electric current (typically, a few thousands of amperes of average electric current) directly flows through the sintered powder materials, a volumic heating rate resulting from the Joule effect, which is in contrast to the conductive heat transport applied in conventional sintering systems, permits a rapid increase in temperature that is able to enhance the mass transport mechanisms responsible for sintering phenomena, thus improving the consolidation rate. Furthermore, the surface effects that is induced by the SPS process also plays a significant role in the densification process. Figure 2 shows possible electric current path through powder particles inside the die and the temperature image on powder particles surface during the SPS process. 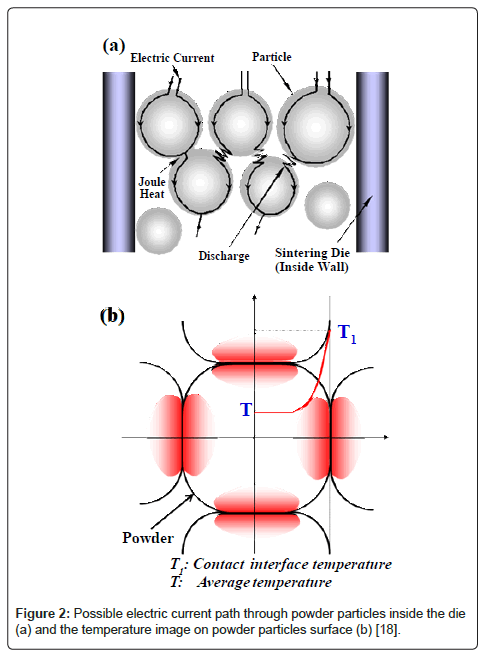 In summary, high heating rate (up to 1000 K min-1), the effect of the current or electric field, and the application of pressure are mainly features of the spark plasma sintering technique.

Since an economical SPS system has been developed, this process has become more attractive for the development of advanced materials and the sintering/synthesis of those materials that are very difficult to be sintered by the conventional sintering processes such as hot pressing and hot isostatic pressing processes. Using the spark plasma sintering process, pure metals, alloys, ceramics, polymers, composites, superconductors, thermoelectric materials, functionally graded materials (FGMs), and so on, have been produced. During the last 20 years, the number of papers related to sintering/synthesis of the materials by the SPS technique, as shown in figure 3(a), exhibits a exponential increase. At present, about 500 papers per year are published. The data was collected from ISI Web of Knowledge. 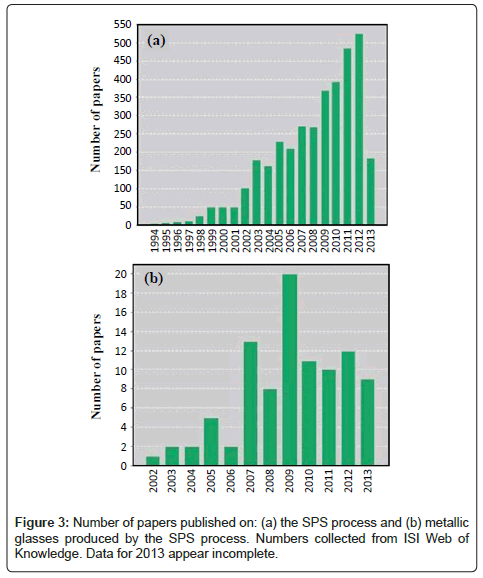 Figure 3: Number of papers published on: (a) the SPS process and (b) metallic glasses produced by the SPS process. Numbers collected from ISI Web of Knowledge. Data for 2013 appear incomplete.

Based on the features of the spark plasma sintering process, sintering/synthesis of the materials can be carried out at a lower temperature and in a shorter time than that by conventional sintering processes. Therefore, the SPS process is favored to sinter materials that need suppress crystallization and grain growth, such as metallic glasses and their composites. During the last 10 years, a large number of studies about consolidating metallic glasses and their composites by using the SPS process have been carried out. Figure 3(b) shows the number of papers associated to metallic glasses produced by using the SPS technique, exhibiting a continuously increase.

Using the SPS process, large-size and high-strength Zr-based [31-34], Cu-based [35-37], Ni-based [5,6,38-40], Fe-based [40-43], Tibased [44-47], Mg-based [48,49] and Al-based [50] BMGs and their composites have been developed. It has been demonstrated that the BMGs produced by the SPS process exhibited high strength which was similar to that of as-casting glassy alloys. By spark plasma sintered the mixed powders of the glassy alloy powder blended with metal or ceramic particulates, bulk metallic glassy composites simultaneously with ultra-high strength, enhanced ductility, and satisfying large-size requirements have been produced