Copyright: © 2014 Baba AI, et al. This is an open-access article distributed under the terms of the Creative Commons Attribution License, which permits unrestricted use, distribution, and reproduction in any medium, provided the original author and source are credited.

Phytoplankton succession is a well-known phenomenon in aquatic ecology and several studies have described the patterns and underlying mechanisms of the seasonal dynamics [1]. However, the knowledge of the composition and abundance of phytoplanktonic organisms constitutes an indispensable feature for the assessment of the trophic status in water bodies for the evaluation of the possible or optimal utilization of different water resources. Phytoplankton form the basis of the food chain in open water resources and acts as an indicator of the water quality. Due to the interdependence existing between the different organisms of which systems are composed, these variations in the phytoplankton communities translate to changes in the trophic chain and the productivity of the lakes. The biological spectrum of the lentic fresh water bodies is multidimensional where phytoplankton are useful in bio monitoring the ecological disturbance caused by a number of physico-chemical factors, sewage pollutants and other anthropogenic factors Although, voluminous literature is available on the plankton population of freshwater habitats of valley [2-12], scanty literature is available on Wular lake. Thus, the present study is aimed at evaluating the seasonal variation in the diversity and density of phytoplankton to cover the existing gap in the knowledge about the lake.

Wular lake, the largest freshwater lake of the Indian subcontinent, is located 54 km northwest of Srinagar city in district Bandipora. Geographically the lake is situated at an altitude of 1,580 m (a.m.s.l) lying between 34°17´-34°24´N latitudes and 74°29´- 74°39´E longitudes. It is elliptical in shape with a maximum length of 16 km and breadth of 7.6 km. In ancient times, its surface area was 202 km2 [13], which at the turn of 20th century got reduced to 189 km2, with an open water area of 24 km2 [14]. The present site is located on the eastern side of the lake in the Bandipora district having geographical coordinates of 340 39′ 19″ N and 740 47′ 8.8″ E. This shallow site also receives water from few springs found in the surrounding. Local people carry out washing of clothes, contributing nurtrients to this site. This site is heavily infested with emergent macrophytes among which Phragmites australis, Typha angustata, Myriophyllum verticillatum and Sparganium ramosum are the dominant ones. The depth of this site varied between 0.3-1m. (Figure 1). 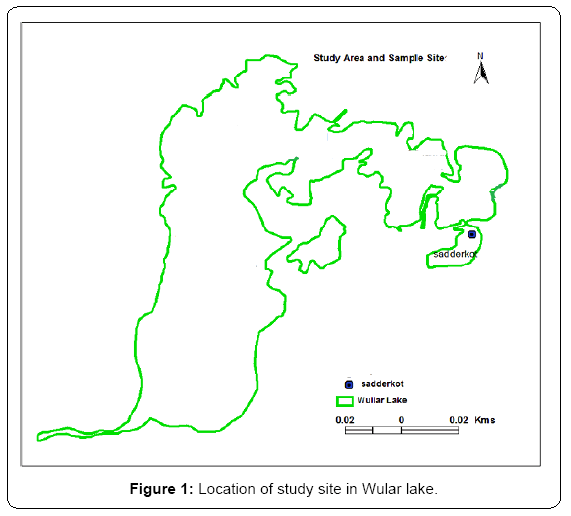 The sampling was carried on monthly basis from March, 2011to February, 2011 at the selected site. Phytoplankton samples were collected from the site by filtering 30 liters of water through a standard plankton sieve net of bottling silk with mesh size 64 microns. The seived residue, collected in the tube of 50 ml capacity attached at the end of the net, was properly transfered into a well labelled vial and tranported to lab under dark conditions. The bottles were thoroughly cleansed and rinsed with distilled water before collection. Samples were preserved by adding 1 ml of Lugols solution and 3 drops of 4% formalin (APHA 1998). Quantitative analysis of phytoplankton was done by drop count method. The results were obtained by recording the number of organisms per ml. Identification of algae was done with the help of standard works by APHA [15-20], and different online keys which included:

Diversity, distribution, abundance and variation in the biotic factors provide information of energy turnover in the aquatic systems [24]. Phytoplankton communities do not respond only to natural changes into the lakes, but may also present variations as a consequence of human interventions affecting the water body, either directly or through activities carried on in the basin as a whole. These influences affecting the lakes result in the modifications of structure and dynamics of the phytoplankton which may take the form of changes in the taxa of which the algal associations are composed, in the abundance of each taxa, the richness and diversity of the associations, and other community features.

The composition and density of different taxa of algae at Saderkot during March 2011to Feb 2012 is given in Table 2. Bacillariophyceae formed the most dominant group of phytoplankton in terms of diversity as well as density. In general, Bacillariophyceae constitute the most important group of algae [25] and has been reported to be dominant among phytoplankton in lakes and wetlands by several authors [6,26-29] which is attributed due the presence of good concentration of SiO2 in water bodies that helps in the frustule formation [30].

Among Baccilariophyceae, the most abundant species were Diatoma sp., Navicula radiosa, Fragilariforma virescens, Fragilaria capucina and Navicula angusta. The genus Navicula was the most diverse and species rich taxa representing 8 species. The most abundant species among Chlorophyceae in terms of mean population density were Cosmarium monomazum , Spirogyra sp. and Pediastrum biradiatum. The genus Closterium was most diverse representing 3 species. Oscillatoria limosa , Phormidium mucosum and Anabaena torulosa were the main representatives of Cyanophyceae making significant proportion in the overall density of phytoplankton. Euglenophyceae in the present study was the least represented group with four genera and among these, genus Euglena alone was represented by four species. However, the most abundant species were Euglena acus and Phacus suecicia.

The monthly variations in phytoplankton population density (ind/L) are depicted in Table 3 and Figure 2. The seasonal changes in the species composition, distribution and density are due to the changing environmental conditions. As such, in the present study, the phytoplankton depicted bimodal growth curve with peaks in spring and autumn which may be as a result of regeneration and availability of minerals as a result of decomposition of organic matter in sediments during these two peak periods. These findings are in agreement with those of Kaul [3] and Rather and Pandit [31]. The seasonality of phytoplankton depicting a bimodal growth curve showing its numerical surge in spring and autumn is also attributed to the moderate water temperature conditions besides the release and availability of plant nutrients during these periods [22].

Table 3: Monthly variation in density of phytoplankton at Saderkot, Wular lake during March 2011 to Feb 2012.

Bacillariophyceae formed the most dominant group of phytoplankton at the site. The population density of Bacillariophyceae at the selected site varied from a minimum of 20,300 ind/L in the month of March to a maximum of 178,000 ind/L in the month of October. However, on seasonal basis, highest population density of diatoms was observed in autumn as well as winter, which could be attributed to their ability to grow under the conditions of weak light and low temperature [32,33,8] which are less suitable for other algae. The findings are in consoniance with the findings of Lund [34] and Munawar [35]. Kant and Kachroo [2] also reported the existence of diatom peak in post autumn to winter in Dal lake, Kashmir.

Chlorophyceae formed the second most dominant group of phytoplankton at the selected site. The population density of Chlorophyceae varied from a minimum of 5,300 ind/L during December to a maximum of 80,200 ind/L in April. However on seasonal basis, this group showed unimodal spring peak which can be attributed to absence of macrophytes in spring allowing the Cholophyceans to absorb nutrients especially phosphorous and nitrogen and the increasing. The spring bloom of Chlorophyceae was also recorded by Sommer [36] while working on the seasonal succession of phytoplankton in Lake Constance.

Cyanophyceae formed the third most dominant group of phytoplankton, maintained a population density range of 6,500 ind/L in the month of May to 1272 ind/L in June, with its peak growth in summer in which Oscillatoria limosa contributed the major share. However, the overall density of blue greens remained low during other months. In genral, Cyanophyceae in the present study depicted a unimodal summer peak, thereby indicating the influence of temperature on this group. George [37] has suggested that high temperature acts as a principal factor causing blooms of Cyanophyceae. However, increased phosphate concentration due to addition of waste-water containing phosphates can also be related to dominant summer peak, thereby using the blue greens as a bioindicator of eutrophication.

Euglenophyceae in the present study formed the least represented group of phytoplankton. The population density of Euglenophyceae ranged from a minimum of 3,300 ind/L in May to a maximum of 21,500 ind/L in June, showing its peak growth in summer which can be attributed to the increasing temperature in addition to the level of organic matter [38] and high nutrient concentration [5,27,35] which was observed to be contributed by the use of detergents at the site during summer (Figure 3).

Figure 3: Seasonal variation in mean density of phytoplankton of different classes during March 2011 to Feb 2012.

Figure 4: Monthly variation in percent density of different classes of phytoplankton during March 2011 to Feb 2012.

Figure 5: Seasonal variation in percent density of different classes of phytoplankton during March 2011 to Feb 2012.

Figure 6: Percent contribution of different classes of phytoplankton at the study site.

An important application of diversity indices in phytoplankton studies is their usage in the assessment of pollution. Species diversity is a function of species richness and evenness with which the individuals are distributed in these species [39]. Highest value of Shannon-Wiener Index was recorded for Bacillariophycece (3.424) and lowest for Cyanophyceae (1.801). For Indian lakes, Shannon–Weiner proposed a diversity index greater than (> 4) is clean water; between 3-4 is mildly polluted water and less than 2 (<2) is heavily polluted water [40]. Since, the Shannon-Weiner diversity index for different algal groups in the present study ranged between 1.801– 3.424 in the selected water body, therefore, this water body oscillates between moderately polluted to highly polluted one. Maximum evenness values were recorded for species poor and evenly distributed Euglenophyceae (0.9302), against the minimum for Cyanophyceae (0.6054). The present results indicate consistently higher phytoplankton evenness with broadly identical values (Table 5). This reflects equitable abundance of various species throughout the study period. Highest values for species dominance were recorded for Cyanophyceae (0.2485) and lowest for Baccilariophyceae (0.04154). Phytoplankton groups indicate lower dominance with concurrent values. (Figure 7)

Table 5: Variation of diversity indices of different groups of phytoplankton at Saderkot,Wular lake, Kashmir during March, 2011 to February, 2012. 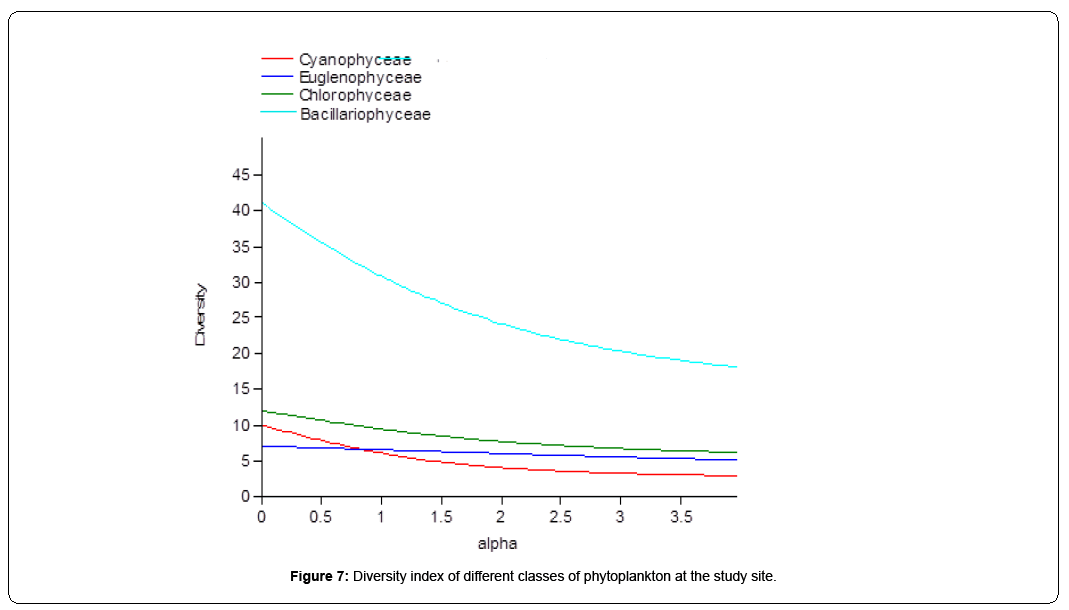 Figure 7: Diversity index of different classes of phytoplankton at the study site.

The Wular Lake is subjected to pollution due to addition of fertilizers from agricultural lands and domestic sewage from the human habitation. Progressive enrichment of water with nutrients leads to mass production of algae, which in turn leads to the increased productivity and other undesirable biotic changes. A number of workers have reported many algal species as indicators of water quality [41-43]. Nandan and Aher has shown the algal genera, like Euglena, Oscillatoria, Scenedesmus, Navicula, Nitzschia and Microcystis to flourish in organically polluted waters. This almost comborates with the earlier study by Palmer [44] who maintained that genera like Scanedesmus, Oscillatoria, Microcystis, Navicula, Nitzschia and Euglena mostly belonging to organically polluted waters. The very much presence of above taxa n the present water body suggests the lake to be organically polluted. Further greater abundance of Oscillatoria limosa in the present study indicative of pollution of biological origin, a fact also revealed by Gadag [45]. The above study gains further support from the studies of Kumar [46]; Zargar and Ghosh, 2006, that excessive growth of certain algal genera, viz., Anabaena, Oscillatoria is an indicative of nutrient enrichment of aquatic bodies.

The study is the part of the work carried out during Ph.D programme of the first author. The authors wish to thank the Head, P.G. Department of Environmental Science, University of Kashmir, Srinagar, Kahmir for providing laboratory facilities for carrying out this study. The help rendered by research scholars of Aquatic Ecology Lab namely Naseer, Rafia, Saima, Javaid Shah, Javaid Dar, Sayar and Salim in field work is greatly acknowledged. Further help of scholars namely Adil and Nuzhat Shahi in statistical analysis is highly acknowledged.