Copyright: © 2016 Al-Shareef LAH. This is an open-access article distributed under the terms of the Creative Commons Attribution License, which permits unrestricted use, distribution and reproduction in any medium, provided the original author and source are credited.

An important goal in forensic entomology is the identification of necrophagous fly species that breed directly on carcasses. In kingdom of Saudi Arabia there are rarely studies on carrion breeding blowflies. Using rabbit carcasses as a model for study, a key for the identification of three species of blowflies (Diptera: Calliphoridae) collected from deferent habitat (desert, urban, agriculture and coastal) in Jeddah city, west region of the Kingdom of Saudi Arabia was prepared. The blowfly species which found were Chrysomya megacephala, Chrysomya marginalis and Chrysomya albiceps. This study was conducted to create database information on necrophagous flies in the Kingdom of Saudi Arabia geographical region, and it is essential to the progress of forensic entomology in the country.

Forensic entomology applies insect evidence to legal problems. Compared to the traditional procedures in Forensic Medicine, insects are accuracy even in advanced stages of decomposition (after four to five days postmortem) when postmortem phenomena such as autolysis and putrefaction occur [1,2]. Flies from the family Calliphoridae are the first group that arrive to the cadaver [3,4], and attract by the odor produce during the early stages of decomposition. Since they lay eggs on a carrion within minutes after death, the estimation of the age of the oldest present eggs, larvae or pupae will provide a minimum postmortem interval (mPMI) [4-8]. Insect species associated with carrion and the period of life cycle vary according many factors, one of the most important being the geographic region or bio-geo climatic zone. The bio-geo climatic zone includes the habitat, vegetation, soil type and meteorological conditions of the area [9]. Therefore, knowledge of the insect fauna that are attracted to human cadavers in every geographical region is fundamental for the use of flies as forensic indicators, and databases should be developed [10,11]. This sort of information is obtained from field experiments on carrion decomposition, usually made with animal models [12]. However, in the Kingdom of Saudi Arabia only rarely studies have been conducted on this subject and the blowflies are poorly known, while using information from other bio-geographical areas, with different fauna and environmental conditions, may not provide a sufficient degree of accuracy for using flies in forensic cases [13]. For this purpose the current study aims to identify species and start to create a database for forensic important blowflies which present in the kingdom of Saudi Arabia particularly in Jeddah bio-geo climatic zone.

Specimens for this study were obtained from domestic rabbit carcasses located in four deferent habitat (desert, urban, agriculture and coastal), in Jeddah city in autumn, 2015. Jeddah city is located on the west coast of the Kingdom of Saudi Arabia (latitude 29.21 north & longitude 39.7 east), in the middle of the eastern shore of the Red Sea. The temperature and relative humidity at the time of collecting flies were varied from 26.83°C to 30.62°C and 15% to 89%, respectively. The flies were collected using entomological net and killed in 95% ethyl alcohol, then washed by water with small amount of detergent to remove dust. In some flies real body color was difficult to be observed and seems dull because of the excessively weathered, and we could to solve this problem by placing the specimens in xylene for two hours. The flies were identified with the aid of dissecting stereomicroscope from Leica Company (Leica M205 C stereomicroscope). Digital photographs were taken with Leica IC80 HD camera adapted to a Leica M205 C stereomicroscope. Measurement was given in millimeters. The taxonomy and terminology follows [14-18].

During this study adult fly specimens were obtained from domestic rabbit carcasses located in four deferent habitats (desert, urban, agriculture and coastal) in Jeddah city, kingdom of Saudi Arabia. These flies were observed among the initial colonizers of the corpse, arriving in short time after death and laying their eggs into the natural orifices. All collected flies were belong to family Calliphoridae (blowflies), which identified by presence row of bristles on the meron (meral bristles) (Figure 1), absence of prominent subscutellum (Figure 2), third antennal segment has plumose arista (Figure 3), they were medium to large flies (4-16 mm in length) with metallic blue or green thorax and abdomen (Figure 4). All these blowflies from Subfamily; Chrysomyinae which easily recognized by being base of stem-vein (R) with row of bristles on the dorsal surface (Figure 5). The flies belong to genus Chrysomya Robineau-Desvoidy which characterized by reniform greater ampulla with stiff erect hairs (Figure 1), dorsal surface of lower calypter with dense hairs (Figure 6), dorsum of first abdominal tergite (syntergite 1+2) and posterior margins of tergites 3 and 4 black (Figure 7), genal dilation (cheek) whitish or yellowish (Figures 8- 10). 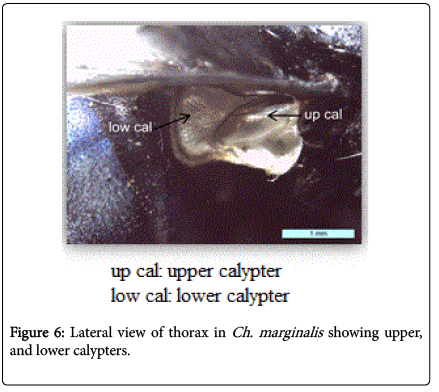 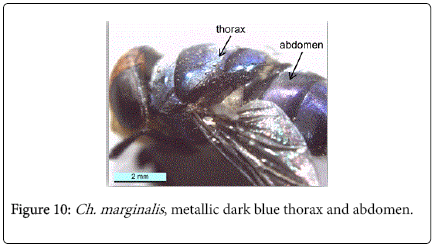 Key for the identification of the species of Calliphoridae with forensic importance in Jeddah city, Kingdom of Saudi Arabia 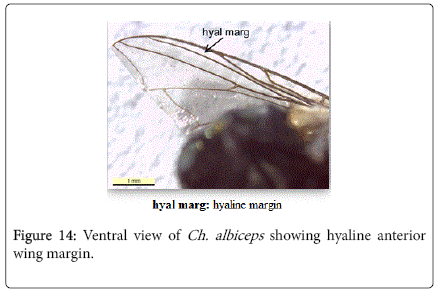 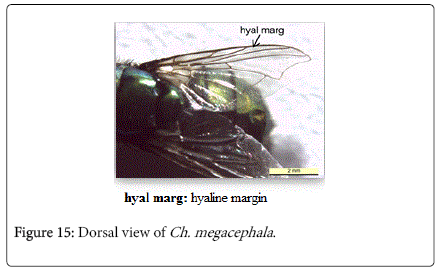 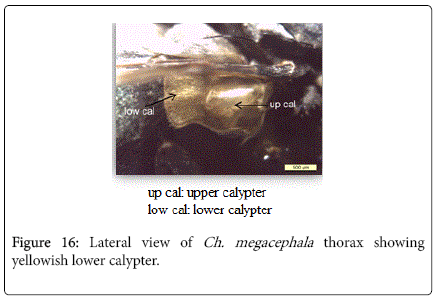 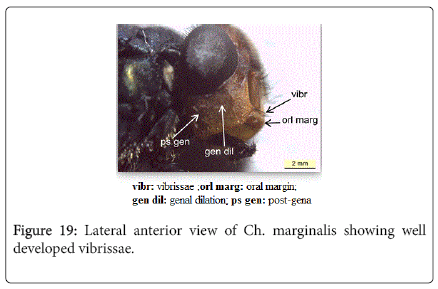 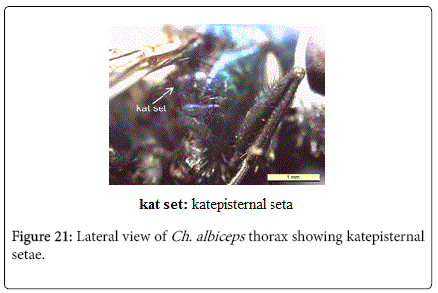 Distribution: Chrysomya albiceps is very common species in the Mediterranean regions, and has been reported in Egypt, Iran, Iraq, Kuwait, Lebanon, Libya, Oman, Pakistan, Kingdom of Saudi Arabia, Syria, United Arab Emirates and Turkey [37]. It is recently shown expansion towards central Europe [47-49]. This species is already established in Portugal [50] and other European countries [51], recently having reached Poland [49]. It was also recorded in America [16], West Indies.

Blowflies occur in all biogeography regions and contain around 1500 species [52]. The fauna of blowflies has been studied all over the world; in South America [53], Argentina [54], North America [16,18], Portugal [55], East and South Asia [56], Africa [57]. It was also studied in European and Mediterranean regions [58], Afrotropical region [17]. Blowfly species in the Middle East region were studied by Akbarzadeh et al. [37] and a key was accomplished. However, the fauna of blowflies of forensic important was not studied enough in the Arabian Gulf region, and there is not any key to identify species in the Kingdom of Saudi Arabia. This situation stops broad application of insects for medico-legal purposes due to a lack of knowledge proper tools for species identification of the local fauna. According to [53], the definition of the carrion flies faces two major problems: the lack of taxonomists and the lack of keys. Therefore, recent study is a part of large ongoing effort to identify carrion-feeding entomofauna and to start to build a checklist of necrophagous species present in this geographical area; the Kingdom of Saudi Arabia.

In this study, Chrysomya megacephala (Fabricius) was observed among the first wave of flies visiting rabbit carcasses. This species known as the ‘oriental latrine fly’ due to its favorite place of ovipositing in latrines [60], and it is may be origins in New Guinea [61]. Larvae are commonly breed in feces and carrion [30,62]. Due to its close association with humans, it was considered to be a potential mechanical vector of faecal pathogens [63]. Chrysomya megacephala was recorded in Kuwait by Al-Mesbah et al. [64]. It was used in forensic entomology cases, for postmortem interval determination [65-67]. In the recent study, the blowfly Chrysomya marginalis (Wiedemann) was attracted to the rabbit carcasses. This species is normally feces and carrion breeder and one of the primary flies associated with decomposing corpses in areas in which the species is present [53]. It is rarely enters houses, but are common around butcher shops, and also feed from sores and wounds of cattle [62]. Braack [68] found large numbers of Ch. marginalis on freshly death impala in Kruger Park. In the Arabian Gulf region Chrysomya marginalis was reported in the Kingdom of Saudi Arabia on rabbit carcasses in the mountains of Al-Baha Province at southwestern area [69]. It was also recorded in United Arab Emirates, Oman and Yemen [37]. One of the most abundant blowflies species associated with rabbit carcasses in this study was Chrysomya albiceps . It is strong fliers, and the maximum dispersal rates for this species were estimated as 16 km/12 days [70]. Chrysomya albiceps larvae are predatory on other larvae present in carrion [62]. They are typically found in carrion but are also able to consume decomposing flesh on wounds of living animals, and considered a primary myiasis fly [26]. Adults prefer high temperatures and humidity, and can be attracted in large numbers by meat [62]. Buttiker et al. [71] proved that Chrysomya albiceps is endophilic in Saudi Arabia and a nuisance in homes and markets there.

It was recorded in the Kingdom of Saudi Arabia by [69] in Al-Baha Province at southwestern region, and in Jeddah city at the west region by [72], it was also reported in Qatar [73] and in Kuwait [64]. Al- Ghamdi et al. [74] collected Chrysomya megacephala and Chrysomya albiceps from different locations of Jeddah city, and they mentioned some morphological characters for these two species which were not enough to understand taxonomical features, also they didn’t prepare any taxonomical key.