Spectrophotometric Determination of Nifedipine and Nicardipine in their Pharmaceutical Preparations

Copyright: © 2015 Hamd MAE, et al. This is an open-access article distributed under the terms of the Creative Commons Attribution License, which permits unrestricted use, distribution, and reproduction in any medium, provided the original author and source are credited.

A sensitive and selective spectrophotometric method was developed for determination of nifedipine (NIF) and nicardipine (NIC) in their pharmaceutical preparations. The method based on a rapid reduction of the nitro to primary amino groups using zinc dust and hydrochloric acid. The resulting primary aromatic amine was subjected to a condensation reaction with p-dimethyl amino benzaldehyde to produce a yellowish-green color of Schiff’s bases which quantified spectrophotometrically at the absorption maxima of 434 and 441 nm for NIF and NIC, respectively. Beer’s law was obeyed in the concentration ranges 2.0 to 12.0 μg/mL with a limit of quantitation 1.4 and 1.9 μg/mL and the mean percentage recoveries 98.2±0.3 to 99.5±0.3% NIF and NIC, respectively. The proposed methods were successfully applied to assay NIF and NIC in their capsules and tablets.

Nifedipine (NIF) and nicardipine (NIC) (Figure 1) are the prototypical of 1,4-dihydropyridine (1,4-DHP) and calcium channel blockers have the therapeutic activities of peripheral and coronary vasodilation. They are used in the management of hypertension, angina pectoris, and some other cardiovascular disorders. Many analytical methods have been developed for their determination in bulk, pharmaceutical formulations, and in biological fluids such as; Spectrometric methods (Spectrophotometric [1-8] and spectrofluorimetric [5, 9-13]), Electrochemical methods [14-16], liquid chromatographic method using different modes of detections [17-22]. 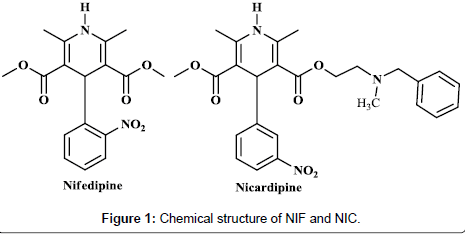 Visible spectrometry is probably the most widely used analytical technique, it is very widely used in clinical chemistry, and environmental laboratories because many substances can be converted to colored derivatives, and the instrumentation is ready available and generally fairly easy to operate [23]. The aim of the study was to develop a simple method for precise routine determination of these important drugs in our medical community in Egypt.

Reduction of the nitro group and preparation of standard drug solutions: A stock standard of NIF and NIC solutions were freshly prepared and kept in dark containers due to their photosensitivity [26]. A stock solution 0.5 mg/mL of drugs were prepared in ethanol, then the solution was treated with 20 mL of HCl (3N) and 1g of Zinc dust with shaking until 10 min in a beaker [27]. The mixture solution was filtered then made up to 100 mL with ethanol. Finally, the reduced stock solutions were subjected to the general recommended procedure after dilution with ethanol to fulfill the required concentrations.

Procedure for calibration curve: One-milliliter of the reduced NIF or NIC standard solution with different concentrations was transferred into 10-mL calibrated flasks. 1.0 mL of p-DMAB reagent was added, mixed well and lift for 25 min to for reaction compellation and produce a yellowish-green color. The chromogen was measured at 434 or 441 nm, respectively for NIF and NIC against the blank sample treated similarly after dilution by ethanol to the mark.

Capsules contain NIF and atenolol: Twenty capsules of Tenolat SR® were treated similarly as described above; the resulting reduced solutions were successfully free-from any interference.

Content uniformity: The content uniformity test was carried out by randomly selecting ten tablets and capsules. The tablets and capsules were weighed and powdered, a quantity of powder equivalent to one mg of drug was transferred to a 50-mL volumetric flask, 40 mL water is added and treated similarly as described above. The drug content was calculated using the standard calibration curve and the mean percent of drug content was calculated as an average of three determinations [24]. 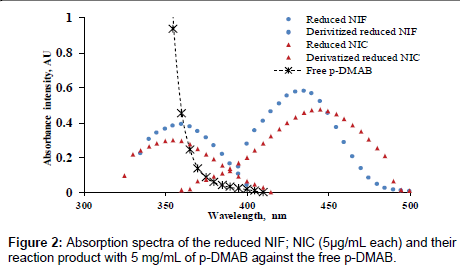 Figure 2: Absorption spectra of the reduced NIF; NIC (5μg/mL each) and their reaction product with 5 mg/mL of p-DMAB against the free p-DMAB. 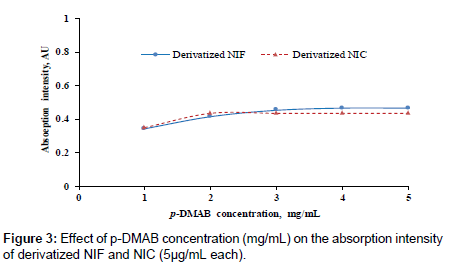 Figure 3: Effect of p-DMAB concentration (mg/mL) on the absorption intensity of derivatized NIF and NIC (5μg/mL each).

Different degrees of temperature (25-60°C) were carried out to study its effect on the reaction between p-DMAB and the investigated drugs. The measurements were decreased as the temperature increased as in (Figure 5). The highest color intensities were obtained at the room temperature 25 ± 5°C. 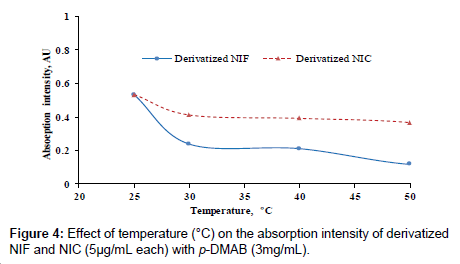 Figure 4: Effect of temperature (°C) on the absorption intensity of derivatized NIF and NIC (5μg/mL each) with p-DMAB (3mg/mL). 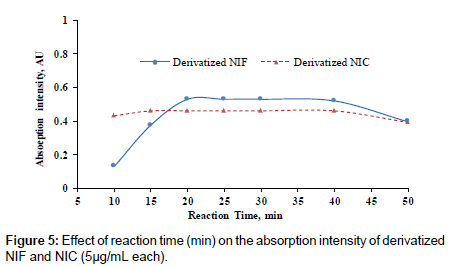 Figure 5: Effect of reaction time (min) on the absorption intensity of derivatized NIF and NIC (5μg/mL each).

The effect of time on the reaction between the investigated drugs and p-DMAM was studied by carrying out the reaction for different periods of time ranging from 10-50 min. The reaction was completed after 20°C, but for the precise and reproducible measurements the reaction time was selected after 25 min, (Figure 5).

Next, various solvents such as water, ethanol, methanol, propanol, and acetone were tested in order to select the most suitable one for the further measurements. The highest measurements were obtained when ethanol was used as a diluting solvent.

The Job’s method of continuous variation [28] was employed. Master equimolar solutions (1×10-3 M) of both p-DMAB and the investigated drugs were prepared. Series of 10-mL portions of the master solutions were made up comprising different complimentary proportions (0:10, 1: 9, ……, 9:1, 10:0) in 10-mL volumetric flasks, mixed well, and allowed to stand for 30 minutes at room temperature (25 ± 5°C), then subjected to the recommended procedure. The stoichiometry of the reaction was 1:1 ratio for both drugs as shown in (Figure 6). 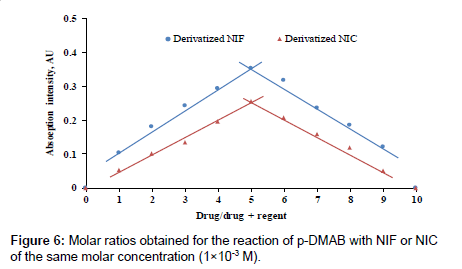 Figure 6: Molar ratios obtained for the reaction of p-DMAB with NIF or NIC of the same molar concentration (1×10-3 M).

In the present work, the quantitative reaction between the investigated drugs and p-DMAB was proposed. The nitro group present in the structure of NIF and NIC were reduced to primary aromatic amino groups with Zn/HCl mixture and condensed with aldehyde p-DMAB. The reaction was based on imine formation in acid catalyzed environment, which having characteristic yellowish-green color was measure spectrophotometrically at the respective wavelengths.

Many parameters affect the reaction were studied carefully and optimized. Initially, the reduced NIF and NIC (without derivatization) show absorption spectra at 360 and 355 nm, respectively. But after derivatization with p-DMAB, the absorption spectra of both drugs had a hyperchromic effect and blue shift respectively, at 434 and 441 nm, (Figure 2)

The reaction between NIF, NIC, and p-DMAB is presented in Scheme 1; which can be explained as the following: the presence of HCl in the pretreatment step which protonated the carbonyl oxygen of p-DMAB leaving the carbonyl carbon fully positively charged. The reduced NIF and NIC donated a lone pair of electrons to the carboxyl carbon. Finally, after condensation and dehydration thereafter results in the formation of condensation products plus water and proton as a by-products [29]. 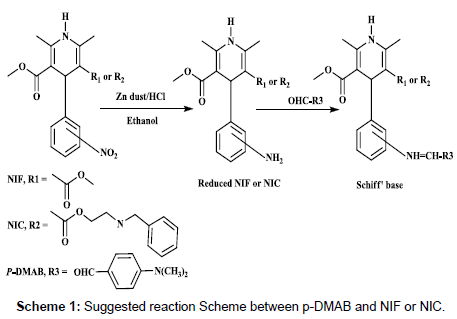 Scheme 1: Suggested reaction Scheme between p-DMAB and NIF or NIC.

Linearity range, detection, and quantification limits: The linearity was found in the concentration range of 2.0 to 12.0 μg/mL with high correlation coefficients (r = 0.983-0.991), as shown in (Table 1). The reproducibility, repeatability, and accuracy of method, are acceptable as shown by the low values of coefficient of variation (CV) with acceptable accuracy, (Table 2). The recovery percent value in the range of 98.2 ± 0.3 to 99.5`0.3% indicates non-interferences from the formulation excipients or other combined drugs (Table 4).

Table 1: Quantitative parameters and statistical data for the proposed method.

Table 2: Assay of five replicate samples of the studied drugs by p-DMAB reagent.

A small variation in concentration of p-DMAB or the reaction time on the method suitability was checked as in (Table 3), it was found that none of these variables significantly affect the proposed methods at a small change in the original optimization.

Table 3: Robustness of the p-DMAB method for analysis of NIF and NIC drug, 5.0μ/mL.

Method application:The good satisfactory results for the investigated drugs in bulk forms were encouraged to apply this procedure for assay their capsules and tablets. The results were compared with those obtained by the official [26] and reported methods [30] with respect to the accuracy (t-test) and precision (F-value). All of the content uniformity of all tablets and capsules with IP limits of 85 - 115 % of drug and none contain below 75 - or above 125% of drug as shown in (Table2 and 4).

Table 4: Determination of NIF and NIC in capsules and tablets using the proposed method.

The proposed method is accurate, precise, and economic that can be successfully employed for the routine analysis for NIF and NIC in the oral dosage forms. There is no requirement of any sophisticated apparatus as in chromatographic methods. Omission of an extraction step with organic solvents is an added advantage.