Copyright: ©2016 Chhabra S, et al. This is an open-access article distributed under the terms of the Creative Commons Attribution License, which permits unrestricted use, distribution, and reproduction in any medium, provided the original author and source are credited.

Background: Worldwide cervical cancer is third most common cancer, but diagnostic, therapeutic problems continue in developing countries where it is most common cancer in women. Very few women report at operable stage. For those subjected to surgery, intraoperative findings, histopathology provides information for continuing or abandoning surgery, adjuvant therapy after surgery and so on. However clinical investigative staging may not be correct, leading to avoidable morbidity of surgery.

Objective: Study was done to know relationship between clinical, intraoperative, postoperative staging in women who underwent surgery for cervical cancer.

Results: Cervical cancer cases increased over the years and also operable cases of cervical cancer from 13.33% to 30.00%. However of 251cases taken for surgery, 28% would not have been for surgery if were known to be of stage which was found intraoperative (preoperative under staging), over staging was only in 2%. Correlating clinical, histopathological staging 36% would not have been for surgery if correct staging (after histopathology) was known pre-operatively. Clinical intraoperative staging had 72% agreement. Histopathological staging which helps in planning treatment agreed with clinical staging in 64%. Problem of under staging continued over years.

Conclusion: With present day techniques available to women with low resources, there is a lot of under staging of cervical cancer cases which leads to unnecessary surgery. Low cost modalities for better evaluation of cases preoperatively and will help in reducing morbidity, save resources also.

Worldwide cervical cancer is the third most common cancer affecting women, in terms of incidence and mortality rates [1,2]. However in some parts of the world including India, it is the most common cancer in women [3-5]. Around one sixth to one fifth worldwide cases of cervical cancer occur in India [2-6,7]. It accounts for 280,000 deaths every year [2,8-10]). When cervical cancer is diagnosed, attempts are made to know the right stage for planning best therapy for prevention of mortality and helping in quality life. This is especially important for countries where resources are limited with problems of availability of high cost diagnostics and therapeutics. Also cervical cancer is more in women from low resource countries. Very few women with cervical cancer report at operable stage [11,12] and for those subjected to surgery, intraoperative findings, provide information for continuing surgical therapy or abandoning the procedure or having adjuvant therapy after surgery. Histopathological evaluation of the surgical specimen provides information for determining the final treatment plans and prognosis for an individual patient. Node histopathology is considered to be the most important predictor, after FIGO staging [13-15]. However, sometimes even, nonmetastatic cancers with non-enlarged glands have poor outcome than would be expected in advanced stage disease for reasons not very well understood [13]. Also clinical early stage cases may actually turn out to be of advanced stage during surgery or after postoperative histopathology. So the research continues. An attempt was made to study the correlation between clinical, intraoperative and postoperative staging in cases of early stage cervical cancer in women who were planned for radical hysterectomy at the health facility with limited resources.

In Block C, 19 were for radical hysterectomy. Of 8 with IIA1, one had parametrial infiltration on histopathology, (staged IIB). In Block D, of 39 cases planned for surgery with stage IIA1, in two cases bladder involvement was diagnosed intraoperative (stage IV A) and hence procedure was abandoned. In Block E, of total 38 women planned, 22 (57.89%) were for stage IIA1, 11 (50.00%) of them continued to be of the same stage histopathologically and in 10 (45.50%) parametrial involvement was diagnosed histopathologically (IIB). (8 (36.40%) IIB, 2 (9.1%) IIIB) and in one (4.5%) of stage IIA1 intraoperative bladder involvement was detected (stage IVA) and hence procedure was abandoned. Of forty six cases planned for radical hysterectomy in Block F, of 12 (26.08%) of stage IA1, one (8.3%) turned out to be insitu cancer after postoperative histopathology. Of 13 (28.3%) operated for IB1, one (7.7%) had malignant mixed mullerian tumour (MMMT) and of 21 (45.60%) operated for IIA1 also, one (4.8%) was having MMMT on histopathology of operative specimen (Figures 1-4). 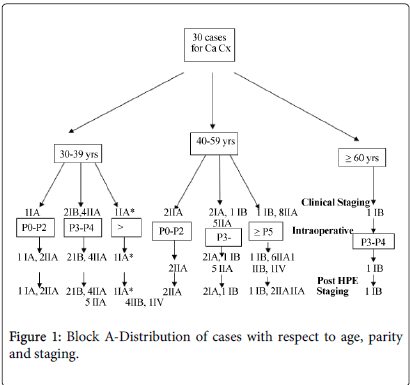 Figure 1: Block A-Distribution of cases with respect to age, parity and staging. 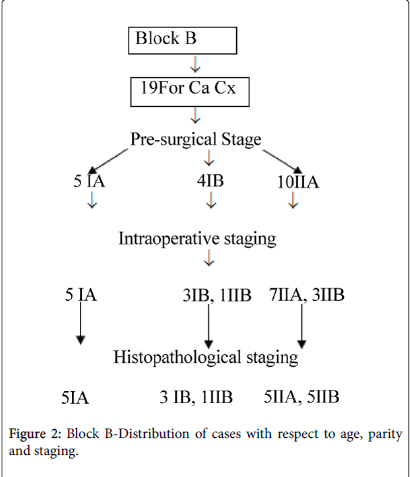 Figure 2: Block B-Distribution of cases with respect to age, parity and staging. 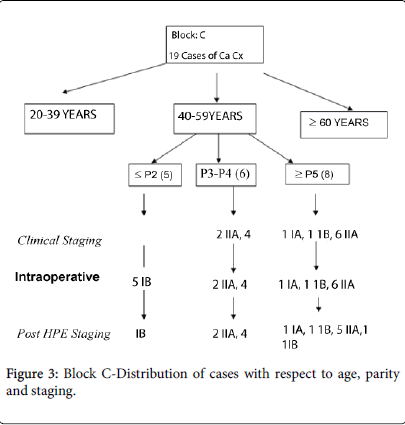 Figure 3: Block C-Distribution of cases with respect to age, parity and staging. 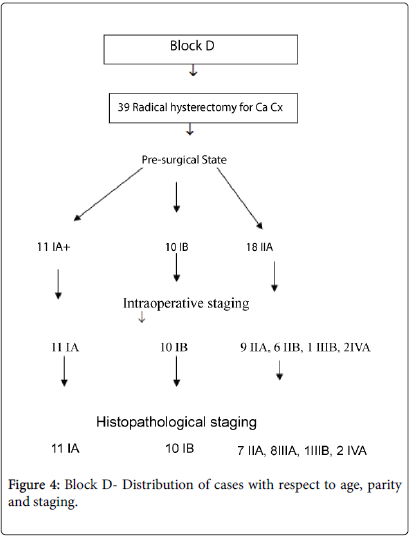 Figure 4: Block D-Distribution of cases with respect to age, parity and staging.

Cervical cancer is seventh in the frequency amongst overall cancers, third most common cancer among women worldwide, with an estimated 500,000 new cases diagnosed every year [9,10]. Attempts continue to be made for prevention and if cancer occurs, to provide the best of therapy for quality life and to prevent death for which appropriate staging is critical. Patients considered poor surgical candidates, because of their comorbidities like cardiac, pulmonary, and renal diseases, coagulopathy etc. are not operated even if these are in operable stage for obvious reasons. Many gynaecologic oncologists favour non-operative treatment in elderly patients also. Sixty-five years of age is cited as the limit for consideration of radical hysterectomy by some [17], however others have found morbidity and survival of older patients comparable to younger ones [18]. Thus, it seems prudent to determine whether a surgical approach is appropriate and safe, based on stage and risk factors independent of chronologic age. Diagnostic evaluation needs to be accurate. The International Federation of Gynecology and Obstetrics (FIGO) advocates clinical staging of cervical cancer based on physical examination and select, widely available diagnostic studies, such as cystoscopy, proctoscopy, intravenous urography, and X-ray of lungs and skeleton. It is also well known that clinical staging is frequently inaccurate. A substantial number of patients who undergo surgical treatment are found to have metastasis that upstage their disease [19,20] or occasionally downstage also. Years back Lapolla et al. [21] in their study involving ninety-six patients with cervical cancer with surgical staging, had reported that, 52% correlation existed between clinical and surgical staging. Winter et al. [22] report rate of parametrial involvement 18% even with FIGO staging IA and 28.5% in IIB. The researchers conclude that 18% of the so called stage I and 34% of the stage IIB had parametrial involvement histopathologically. In a retrospective study, Özsarlak et al. [23] have reported overall accuracy of clinical staging 47% in surgically– pathologically proven primary cases where study parameters for preoperative staging were the presence of tumour, extension into the parametrial tissue, pelvic wall, adjacent organs and lymph nodes and results were compared with histopathological findings. In the present study of women who were planned for radical hysterectomy on the basis of clinical staging, in 36%, the plans of surgical therapy could have been abandoned if their staging was known pre operatively. Whitney et al. [24] have reported that of 1127 patients with stage IB1 cervical cancer, ninety eight (8.7%) were found to have extra uterine disease at operation and the proposed radical operation was abandoned. The Cartwright Inquiry in New Zealand, in which research by two feminist journalists revealed that women with cervical abnormalities were not receiving treatment, as part of an experiment. The women were not told of the abnormalities and several later died. Improved imaging studies such as high-resolution computed tomography (CT), Magnetic Resonance Imaging (MRI), lymphangiography, and Positron Emission. Tomography (PET) may reveal extra uterine disease that cannot be cured with standard surgical techniques. However these radiographic studies are imperfect because they fail to detect micro metastasis which affect prognosis for surgical patients. A very important aspect is also that cervical cancer occurs in poor women, the cost of diagnostic techniques is very high, and it is essential to save the resources for the best therapy necessary. The nodal status is vitally important, both for prognosis and guiding adjuvant therapy. Various studies reveal an overall sensitivity of detecting metastatic disease 92% and a negative predictive value 97%. Results of large, multi-institutional studies in Europe and the United States should help guide the future direction for sentinel node technologies in the treatment of cervical cancer [25].

All said histopathology of the surgical specimen continues to provide information that is central for final treatment planning and prognosis for an individual patient.

The diagnostic aids make treatment costly which at times is not possible in rural settings like ours and also no diagnostic test today helps in diagnosis of micro metastasis. It was observed that between clinical staging and intraoperative staging, there was agreement in 72%. Histopathological staging which helps in planning the course of treatment agreed with clinical staging in around 64%. Low cost modalities for evaluation will help reducing morbidity and save resources.

The authors report no declaration of interest