Objectives: To compare the audiological outcomes of two different approaches of stapes surgery, stapedotomy versus partial stapedectomy. Specifically, our experience in this area will be reviewed and compared to results from other centers performing this kind of surgery. Methods: A retrospective chart review of patients who underwent a stapes surgery between 1997 and 2015. A total of 84 surgeries were performed during this period. Seventy-seven subjects were included in the present study. The audiological results as well as the postoperative vertigo were compared. Results: There is significant improvement demonstrated in postoperative closure of Air Bone Gap in both groups. The partial stapedectomy group showed a significant improvement of air–bone gap closure of 10 dB or more (500 Hz to 2000 Hz) compared with the stapedotomy group, which was achieved in 53.1% and 42.2% of both group respectively. Interestingly, by including the full range of speech frequencies (500 Hz to 4000 Hz), the stapedotomy procedure showed better audiological results than partial stapedectomy. The postoperative vertigo was higher in the partial stapedectomy group. Conclusion: The results of this study clearly show that stapedotomy provides good audiometric results and a lower incidence of complications compared to partial stapedectomy.

Otosclerosis is defined as an overgrowth of the bone of the otic capsule just anterior to stapes footplate in between cochlea and vestibule. In such scenario, the stapes is unable to function normally as a piston and eventually becomes completely fixated, which results in a weaker conduction [1,2]. Clinical features are characterised by hearing loss, tinnitus and vertigo, or combination of these. The prevalence of clinical otosclerosis as reported by Declau et al. during the study of a series of temporal bones is 0.3% to 0.4% of the Caucasian population,

Early attempts to correct the conductive hearing loss associated with otosclerosis date to the late 19th century. The first stapedial operations were performed in 1875 by Kessel who attempted stapedial mobilization [4]. After that, the history of surgical treatment of otosclerosis went through continuous improvements in the surgical technique and instrumentation. Stapedectomy was conducted by Rosen in 1995 [5]. In 1958, Shea [6] introduced the stapedial prosthesis by removing the stapes, sealing the oval window with an autograft vein wall, and then reconstructing the sound-conducting mechanism with an artificial prosthesis [7,8]. After that, Professor Henri André Martin introduced stapedotomy with the use of piston prosthesis. Nowadays, the surgical techniques used for the treatment of otosclerosis are stapedectomy, partial stapedectomy and stapedotomy with more tendencies towards the latter recently.

The aim of this study was to evaluate the success rates of stapedotomy compared to partial stapedectomy in the operative management of otosclerosis.

A retrospective chart review was performed on all patients who underwent stapes surgery in our tertiary centre in Saudi Arabia between 1997 and 2015. All patients were either operated using partial stapedectomy or stapedotomy technique using Skeetermicrodrill (SkeeterOtologic Drill System, Medtronic Xomed surgical products). The stapedotomy is performed by just creating a hole at the foot plate and inserting the piston in it, while in partial stapedectomy part of the foot plate should be removed.

All surgeries were performed by staff surgeons. Seven patients with incomplete data as well as the revision surgeries were excluded from the study. All other patients were included and the following information was gathered from their charts:

2. History of preoperative or postoperative vertigo.

In addition, subjects were divided and their data was analysed according to the technique used. We consider the surgery to be successful according to the audiological results, specifically the closure of air bone gap. The postoperative ABG of both groups were compared based on classification of ABG<10 dB, ABG=10-20 dB or ABG>20 dB. Data were entered into a personal computer and analyzed by the Statistical Package for Social Sciences (SPSS) software version 11.0 (SPSS®: Inc., Chicago, IL, USA). The level of significance was set at (P ≤ 0.05).

This study was approved by the Institutional Review Board (IRB), King Saud University, College of Medicine, Riyadh. All subjects, or their legal guardian, had previously granted consent to the use of relevant data.

A total of 84 stapes surgery were performed in the period from 1997 to 2015 of which seven patients were excluded due to insufficient data. Of the 77 subjects included in the present study, 32 underwent partial stapedectomy while 45 underwent stapedotomy. The mean age was 38 years. Unexpectedly, our data showed that male patients are more than female with a ratio of 1.2/1. The left ear was more than the right one (Table 1).

Comparing the audiological results of partial stapedectomy vs. stapedotomy: 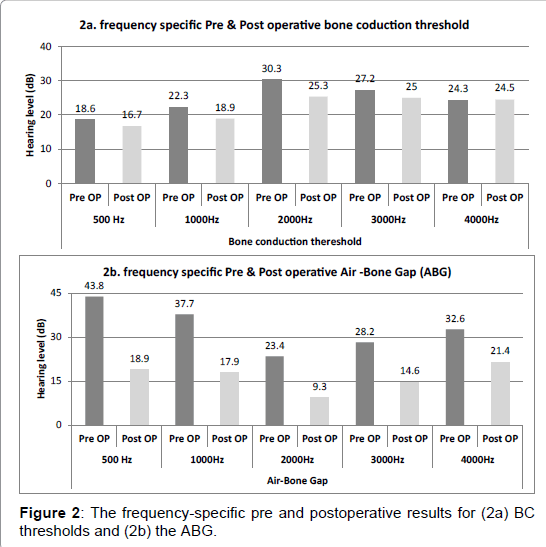 Figure 2: The frequency-specific pre and postoperative results for (2a) BC thresholds and (2b) the ABG.

By exploring ABG closure and comparing both groups, we found that Partial Stapedectomy showed significant closure at 2 K and 3 K with p value of 0.004 and 0.031, respectively. The present study showed an interesting observation. By considering only the low frequencies (500 Hz to 2 kHz), the postoperative ABG<10 dB is documented in 53.1% and 42.2% of partial stapedectomy and stapedotomy group respectively. But when we look at the high frequency (2000 Hz–4 kHz), the postoperative ABG<10 dB is more evident in the stapedotomy group (40%) compared with partial stapedectomy group (37%) (Figures 4a-4d). 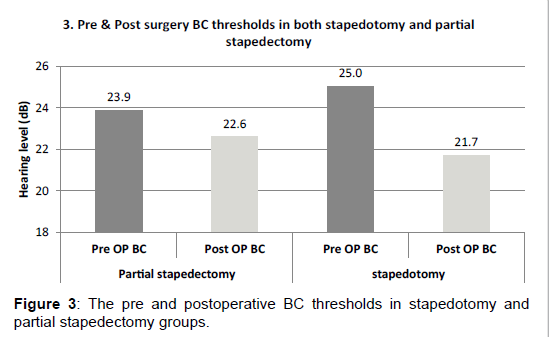 Figure 3:The pre and postoperative BC thresholds in stapedotomy and partial stapedectomy groups. 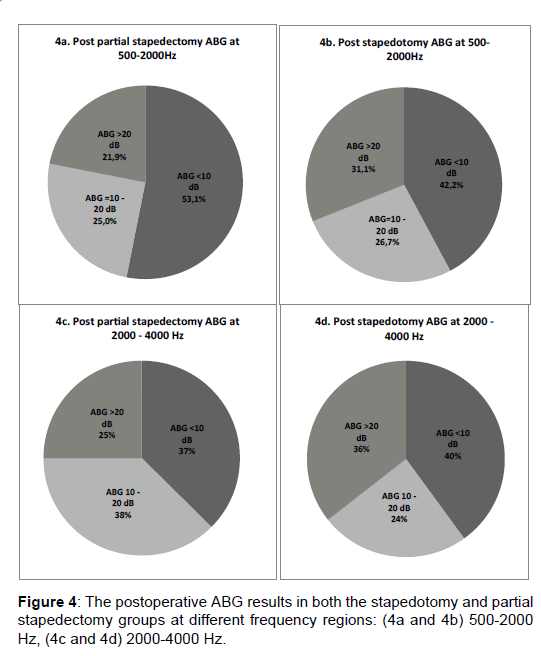 In clinical practice otosclerosis is encountered about twice as frequently in females as in males [11,12]. In the present study, the number of male patients was higher than the female patients (42:35). However, this ratio could be misleading due to many cultural factors. Women in our society usually hesitate to attend medical service. Males however might be more concerned about their hearing than females because their hearing is a major factor at work. In our society the ratio of working females is much smaller compared to working men.

We found less post-operative vertigo following stapedotomy compared with partial stapedectomy, which is supported by previous reports who came to the same conclusion that stapedotomy is less prone to complications than stapedectomy [11,13-15]. In our study, no cases of sensorineural hearing loss documented following stapedotomy or partial stapedectomy. This has also been confirmed previously in the literature demonstrating that the postoperative sensorineural hearing loss is rare [8,11,16]. The current study confirm what has already been proven in the literature: stapes surgery has excellent audiological outcome [3,8,11,17,18].

It has been reported in previous studies that stapedotomy shows better high frequency audiological outcomes compared to stapedectomy, which is also associated with better speech discrimination in a number of publications [8,17]. The same finding is seen in the present study where the stapedotomy group showed better audiological outcome than the partial stapedectomy group, when we looked at the high frequencies (2-4 kHz).

Stapedotomies are more effective and a traumatic than partial stapedectomies because of better hearing results when the full range of speech frequencies (500 Hz-4000 Hz) is considered. Stapedotomy operation should be preferred owing to a lower incidence of postoperative vertigo as demonstrated in the present study.

Copyright: © 2017 Alzhrani F, et al. This is an open-access article distributed under the terms of the Creative Commons Attribution License, which permits unrestricted use, distribution, and reproduction in any medium, provided the original author and source are credited.