Copyright: © 2013 Tripathi BM, et al. This is an open-access article distributed under the terms of the Creative Commons Attribution License, which permits unrestricted use, distribution, and reproduction in any medium, provided the original author and source are credited.

Properties such as high melting point (1285 ± 5°C) [2], low neutron absorption and high scattering cross sections make beryllium attractive for use in nuclear reactors as neutron reflector and moderator. Beryllium, because of its neutron multiplication properties by (n, 2n) reaction for high energy neutrons, coupled with low neutron damage in displacements per atom (dpa) [3], is considered as neutron multiplier material in the solid breeder blanket of the International Thermonuclear Experimental Reactor (ITER). Beryllium is also considered as plasma facing material (PFM) [3] in ITER.

In India, beryllium is extracted from beryl ore. In its pure form, beryl ore is a beryllium-aluminium silicate (3BeO.Al2O3.6SiO2) [6].

Though a large number of methods have been proposed, only two are currently used for beryllium extraction from the ore. These are the sulphate and the fluoride process [6]. In the sulphate process, either molten beryl is water quenched or beryl is fused with alkali in the presence of sodium or potassium carbonate and then digested in sulphuric acid, followed by leaching with water. The aqueous leach liquor contains sulphates of aluminium and beryllium with other impurities. Silica remains as insoluble residue. After aluminium is removed by precipitating as alum, this purified leach liquor is generally subjected to solvent extraction to obtain beryllium bearing solution.

The fluoride route, on the other hand, involves sintering of the beryl ore with sodium silicofluoride or sodium ferric fluoride. The reagent selectively converts the beryllium value of the ore into water soluble sodium beryllium fluoride.

In order to study the factors affecting beryllium recovery, the traditional experimental technique is to vary one factor at a time while keeping others constant. This conventional parametric design of experiment approach is time consuming [8] and requires enormous resources. However, a quantitative estimation of the various parameters affecting the beryllium recovery in extraction process can be determined by an optimization approach using the Taguchi method [9-11].

The Taguchi method uses a special design of orthogonal arrays [12] to study the entire parameters space with a small number of experiments only [8,13]. Taguchi design can determine the effect of factors on characteristic properties and the optimal conditions of factors [13]. This method is a simple and systematic approach to optimize design for process performance, quality and cost of products [8,10]. Moreover, there are two differences of this method from other statistical experimental design methods. First, parameters affecting an experiment can be investigated as the controlling and non-controlling (noise factor). Second, this method can be used to investigate the parameters for more than two levels [12].

Extraction experiments in the ammonium hydrofluoride process were consisted of both pyrometallurgical and hydrometallurgical operations. In pyrometallurgical operation, all samples were prepared by thoroughly mixing beryl ore with ammonium hydrofluoride in alumina crucibles under identical conditions and the resulting mixture was heated in an electrical furnace. The quantity of NH4HF2 in the mixture was kept slightly above the stoichiometric value in all experiments. Heating of all the samples was performed in two steps. In the first step, the temperature and time was maintained in the range of 100-200°C and 30-90 min respectively. Similarly, in the second step, temperature and time was in the range of 300-500°C and 30-90 min respectively. During the heating process, beryl ore was sequentially decomposed by NH4HF2 and finally a mixture of beryllium fluoride (BeF2) and aluminium fluoride (AlF3) was obtained.

The BeF2 was separated from the final mixture by hydrometallurgical operation. In the hydrometallurgical operation, the final mixture (BeF2+AlF3) was subjected to water leaching at room temperature. By the virtue of high solubility of BeF2 and almost insolubility of AlF3 in water at room temperature, BeF2 was readily dissolved in water while AlF3 remained as residue during the leaching process.

Taguchi technique applies orthogonal arrays, to reduce the number of experiments and meanwhile obtaining statistically meaningful results. The selection of suitable orthogonal array depends on the number of control factors and their levels. By inspecting the results of our previous studies on ammonium hydrofluoride process of beryllium extraction, it was experienced that the recovery of beryllium in this process mainly depends on pyrometallurgical operation. The subsequent hydrometallurgical operation involving water leaching of BeF2 is relatively simple and straightforward because of high solubility of BeF2 and almost insoluble nature of AlF3 in water at room temperature. Therefore, only pyrometallurgical factors were selected for process optimization. The four selected control factors in three levels applied in this study are listed in Table 2. The aim was to maximize the beryllium recovery and also to determine the most significant factors affecting beryllium extraction. These are needed for the efficient beryllium recovery from beryl.

Table 2: Control factors and their values corresponding to their levels in extraction experiments.

Statistical analysis of the results obtained from 9 experiments, was performed to see whether the effect of process parameters are statistically significant or not as well as to justify the adequacy of the models. The relative effect of different factors can be obtained by the decomposition of total variation into its appropriate components, which is commonly called analysis of variance (ANOVA). The results of ANOVA analysis for beryllium extraction are presented in Tables 4,5. According to the percent contribution of factors, only first stage reaction temperature (75.74%) was the most significant effective parameter. The effects of other parameters including, first stage reaction time (7.18%) and second stage reaction time (14.26%) were marginal on beryllium extraction. The effect of second stage reaction temperature (2.82%) was almost negligible on beryllium extraction.

Table 4: Results of the analysis of variance (ANOVA) for the beryllium extraction.

Table 5: Results of the pooled ANOVA for the beryllium extraction.

F value is a criterion for comparing model (or factors) variance with residual (error) variance (Table 4). If the variances are close to the same, the ratio will be close to 1and it is less likely that any of the factors have a significant effect on the response. F value is calculated by model variance divided by error variance. According to Table 4, error degree of freedom (DOF) is zero and the error variance could not be calculated. Consequently it was not possible to calculate the F value. In order to eliminate the zero DOF from the error term, a pooled ANOVA was applied. The values of the ANOVA analysis for beryllium extraction after pooling of the second stage reaction temperature from the model are given in Table 5. The model F value 11.47 implies the model was significant and there was only 8.24% chance that a model F value is greater than or equal to 11.47 and this large could occur due to noise. P values less than 0.1 indicate that the effect of model factors are significant within the 90% confidence interval. Therefore, only first stage reaction temperature was significant model term. The percent contribution reveals that the second stage reaction temperature is not statistically significant, at least in the range under study. The first stage reaction time (P = 0.2825 in Table 5) and second stage reaction time are also effective factors on beryllium extraction, but their statistical significance is marginal in 90% confidence interval (P = 0.1653 in Table 5). Meanwhile, Table 5 indicates that 88.7% of the total variation in the beryllium extraction was attributed to the studied experimental variables. Comparing the ANOVA result and pooled ANOVA result, indicated that after pooling the factor with least variance, the percent contributions of the remaining factors decreased slightly, but the ranking of factor effects still remained the same. 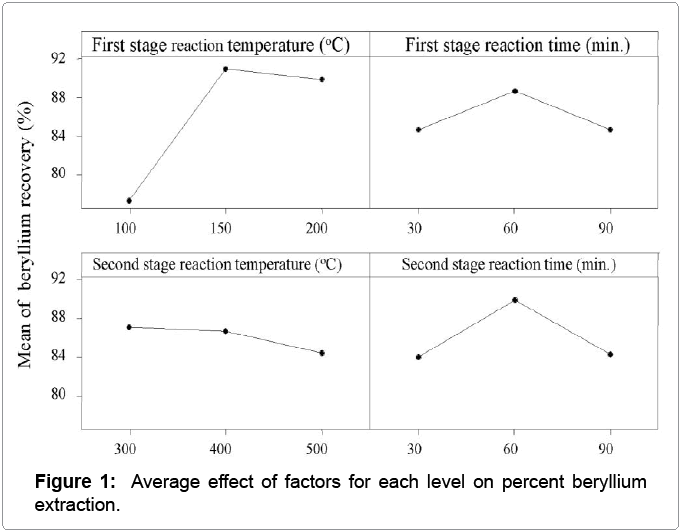 Figure 1: Average effect of factors for each level on percent beryllium extraction.

Table 7: Optimal levels of factors predicted by the model and verification experiment results.

• It was shown that the ammonium hydrofluoride process of beryllium extraction is an efficient method to recover berylliym from Indian beryl ore.

• It was concluded that Taguchi method can successfully be applied to the beryllium extraction from beryllium concentrates for maximizing beryllium recovery. The statistical model developed using the experimental results, was effective to navigate the design space of the process.