Inflammatory Myofibroblastic Tumor of the Larynx: A Case Report

Inflammatory myofibroblastic tumors (IMFTs) are rare neoplasms of unclear origin that are most commonly found in the lungs and the abdominopelvic region, with rare involvement of the larynx [1-3]. Some cases of IMFT have shown immunohistochemical expression of anaplastic lymphoma kinase (ALK) [3]. ALK positivity confers a higher likelihood of recurrence but a lower chance of metastasis and therefore is prognostically pertinent. In this report we wish to add to the body of literature on this disease given the uncommon findings of ALK positivity and subglottic extension. The Institutional Review Board at the University of Texas Medical Branch approved this case for publication.

A 23-year-old female presented to the laryngology clinic with a 5-month history of fluctuating hoarseness. She described a normal voice each morning but experienced vocal fatigue with use and as the day progressed. She denied pain, globus sensation, symptoms of heartburn, or unexplained weight loss. She was not a smoker, and her review of systems was otherwise unremarkable.

At two-months follow up, despite partial compliance with reflux therapy, she had no significant improvement in her voice. Videostroboscopic examination was also unchanged. The patient was then scheduled for a microsuspension laryngoscopy with mass excision (Figure 1B). The firm, sessile, papillomatous mass was completely removed from the glottis using CO2 laser and was sent for histopathological analysis. No steroids were used.

Gross analysis of the surgical specimen showed a tan-pink, soft tissue mass measuring 0.7 × 0.4 × 0.3 cm. Histopathological analysis demonstrated that the specimen was an inflammatory myofibroblastic tumor, with a spindle cell component that was immunohistochemically positive for SMA and ALK-1 (Figure 2).

Laryngeal IMFTs are rare, benign inflammatory masses, of which less than 30 have been previously reported in the English literature. Of these, only 7 originated in the subglottic area [4]. Previous case reports have described a variety of histopathology for IMFTs, but three classic histological patterns of IMFT have been described: (a) myxoid, vascular, and inflammatory areas resembling nodular fasciitis; (b) compact spindle cells with intermingled lymphocytes, plasma cells, and eosinophils; and (c) dense plate-like collagen resembling a desmoid or scar [5].

The most commonly reported symptom of IMFT of the larynx is hoarseness, but symptoms of dysphonia, stridor, shortness of breath, and globus sensation are also common [1,2,4]. In the case presented, the patient only reported hoarseness of voice, a vague symptom which produces a wide differential diagnosis. Here we emphasize the importance of the use of videostroboscopic examination as well as histological examination of surgical specimen to rule out malignancy.

The ALK gene normally encodes a receptor tyrosine kinase that is a part of the insulin growth factor receptor family. IMFTs positive for ALK have been deemed to have a favorable prognosis, with rare malignant transformation and with metastasis of the lesion only found in ALK-negative subsets. Alternatively, ALK-positive lesions have been shown to have higher rates of recurrence, supporting the theory that these lesions are neoplastic, yet still benign [3]. The IMFT removed from our patient presented here was ALK-positive, indicating a need for close follow up to monitor for recurrence.

We report the case of a 23-year-old female patient who presented with fluctuating hoarseness and laryngeal reflux and who was subsequently found to have an ALK-positive laryngeal IMFT. While laryngeal IMFTs are rare neoplasms, it is important to recognize them based on clinical history, picture, and appropriate physical exam, as their symptoms can mimic other diseases processes, and their structure can mimic that of malignant neoplasm. Methods for the removal of laryngeal IMFTs include laser or cold excision, with or without postoperative steroid therapy. Astute pathologists suspecting an IMFT of the larynx should stain for ALK, as ALK positivity indicates a low chance of metastasis, but a higher likelihood of recurrence, both of which are important prognostic pieces of information. 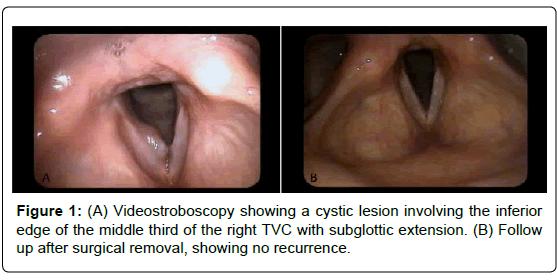 Figure 1: (A) Videostroboscopy showing a cystic lesion involving the inferior edge of the middle third of the right TVC with subglottic extension. (B) Follow up after surgical removal, showing no recurrence. Figure 2: The lesion is composed of spindle cells with myxoid background (A). The spindle and elongated nuclei with eosinophilic cytoplasm (B and C) are noted with prominent lymphoplasmacytic infiltrate (B and D). The spindle cell components are positive for SMA (E) and Alk-1 (F).

Copyright: © 2015 Smith D, et al. This is an open-access article distributed under the terms of the Creative Commons Attribution License, which permits unrestricted use, distribution, and reproduction in any medium, provided the original author and source are credited.