Copyright: © 2016 Baugé C. This is an open-access article distributed under the terms of the Creative Commons Attribution License, which permits unrestricted use, distribution, and reproduction in any medium, provided the original author and source are credited.

Osteoarthritis (OA) is the most common musculoskeletal disease. It is a long-term chronic disease involving the thinning of cartilage in joints which results in bones rubbing together, creating stiffness, pain, and impaired movement. The current control strategy mainly consists in palliative pain treatment, and there are several medicines on the market that alleviate pain and improve function in OA patients. The identification of new therapeutic drugs or procedures could improve the patient quality of life. Recently, the benefice of fatty acids has emerged. In particular, our work published in Journal of Inflammation highlights, by in vitro and in vivo experiments, the anti-inflammatory effects of an injectable copolymer of fatty acid (Ara 3000 beta®) in joints.

Osteoarthritis (OA), the most common musculoskeletal condition, is a long-term chronic disease involving the thinning of cartilage in joints which results in bones rubbing together, creating stiffness, pain, and impaired movement. OA is related with age, but is associated with a variety of both modifiable and non-modifiable risk factors, including obesity, lack of exercise, genetic predisposition, bone density, occupational injury, trauma, and gender. It most commonly affects the joints in the knee, hands, feet, and spine, and is also relatively common in other joints such as the shoulder and hip. As OA causes pain and impairs functionality of the patient, it places a major burden on individuals, communities, health systems, and social care systems [1]. Also, in veterinary field, this disease is a major cause of concern. For instance, the prevalence of osteoarthritis (OA) in the canine population is 20% of adult and 80% of the geriatric (> 8 years old) dogs in North America [2]. Also, recent estimates indicate that 60% of lameness problems in horses are related to OA [3].

Both for humans and animals, therapies consist to reduce pains, but are unable to completely stop the progression of disease. So with time, the joints are so damaged that it must be replaced by prosthesis, at least in humans. In this context, the identification of new therapeutic drugs or procedures could improve the patients, and animal quality of life.

A copolymer of fatty acids, composed of oleic acid, palmitic acid and stearic acid, called Ara 3000 beta® has been used for 35 years for the treatment of dog’s osteoarthritis symptoms. It has been shown to reduce osteoarthritis symptoms in dogs, with a reduction of lameness and pain [4,5]. This injectable gel also inhibits the synthesis of leukotriene and the degranulation of mast cells. Therefore, we evaluated the anti-inflammatory functions of this fatty acid copolymer in joint.

So, we investigated its effects on IL-1-induced MMP production and other markers of inflammation in articular chondrocyte culture. Then, we used an in vivo model of arthritis to evaluate the therapeutic interest of this fatty acid copolymer against inflammatory joint diseases [6].

First, we reproduced in vitro the inflammatory component of osteoarthritis by treating chondrocytes (cartilage cells) with interleukin-1β (IL-1β). This cytokine pro-inflammatory has been detected in the synovial fluid of OA patients, and plays a major role in joint diseases, causing overproduction of prostaglandin E2 (PGE2), reactive oxygen species (ROS), nitric oxide (NO), and matrix metalloproteases (MMPs), which all together contribute to the degradative process of cartilage.

Our study showed that the fatty acid polymer Ara 3000 beta® can modulate the expression of several genes implicated in the catabolism of extracellular matrix and its pathological dysfunction (figure 1). We found that Ara 3000 beta® was capable of preventing IL-1-stimulated MMP expression and release. At dilution 1:250, the inhibition of IL-1 induced MMP1 mRNA and protein release were of 50% and 30%, respectively. Figure 1: Effect of Ara 3000 beta® in human chondrocytes stimulated by IL-1. A, B- MMP-1 mRNA expression and release were evaluated by RT-PCR and ELISA, respectively. C, D- NO and PGE2 levels were determined in medium by Griess assay and ELISA, respectively. Each experiment was reproduced three times. The values are means ± SEM and the significance of differences was calculated with Student’s t test. *: p<0.05; **:p<0.01; ***:p<0.001. 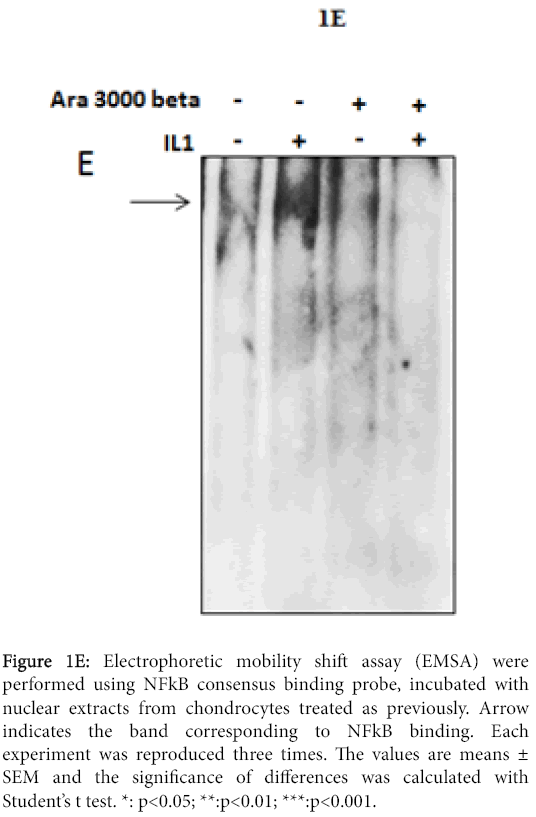 In addition, we showed a clear anti-inflammatory effect of the copolymer of fatty acids, since it decreases both NFκB pathway activation and the release of inflammatory molecules such as NO and PGE2. At dilution 1:250 of Ara 3000 beta®, the NO and PGE2 release induced by IL-1 was reduced of 20% and 62%, respectively. These data suggest a protective effect of fatty acid copolymer on cartilage degradation induced by interleukin-1β. In vitro, the reduction of MMP expression was more important when Ara 3000 beta® was used in pretreatment, suggesting that this copolymer of fatty acids should be also used as preventive treatment.

Human articular chondrocytes were cultured for 6-7 days. Then, the cells were incubated with 10% FCS and 0.25% BSA-containing RPMI medium with Ara 3000 beta® (dilution 1:1000 or 1:250). The next day, medium were changed and cells were incubated with fresh Ara 3000 beta® according the same protocol, and supplemented or not with interleukin-1β (IL-1β) (1 ng/ml). At the end of the experiments, RNA was extracted and medium collected. Figure 2A,B: Effect of Ara 3000 beta® in arthritis rat. Arthritis was induced by injection of Freund Adjuvant. Then, rats were treated or not with Ara 3000 beta® or acetylsalicylic acid (aspirin), and edema (A and B), arthritis severity score (C) and body weight (D) were determined each days during one month. Graphs represent mean values from 10 animals + SEM. For statistical analysis, ANOVA tests (repeated measures) followed by Fisher PLSD test, and Student’s test were done.

Figure 2C,D: Effect of Ara 3000 beta® in arthritis rat. Arthritis was induced by injection of Freund Adjuvant. Then, rats were treated or not with Ara 3000 beta® or acetylsalicylic acid (aspirin), and edema (A and B), arthritis severity score (C) and body weight (D) were determined each days during one month. Graphs represent mean values from 10 animals + SEM. For statistical analysis, ANOVA tests (repeated measures) followed by Fisher PLSD test, and Student’s test were done.

In addition, animals without treatment develop a severe inflammation, whereas animals treated with the copolymer of fatty acids show only a weak inflammation. The arthritis severity score was reduced of 50% by Ara 3000 beta ® as soon as days 15. These data support the validity of clinical cases showing a benefit of Ara 3000 beta® against joint disease in dogs [4], and bring the proof of the antiinflammatory effects of this fatty acid in joints.

This report shows that a copolymer of fatty acids such as Ara 3000 beta® reduces inflammation in joint. In vitro, it impairs IL-1 stimulated-MMP production and release, as well as the release of NO and PGE2 and the activation of NFκB by chondrocytes. Furthermore, in vivo, it reduces edemas, erythemas and ankylosis in arthritic rats. Consequently, fatty acids have anti-inflammatory properties, and may be used to treat joint disease such as arthritis or osteoarthritis.

We thank Alain Dorier (Valbex, Villeurbanne) for technical assistance during animal experiments. Part of the study was supported by Sexmoor Laboratory.