Study of the Antioxidatative Properties of Lithium Cysteine Salt

Copyright: © 2017 Ghazaryan G. This is an open-access article distributed under the terms of the Creative Commons Attribution License, which permits unrestricted use, distribution, and reproduction in any medium, provided the original author and source are credited.

The actual problem of modern medicine and pharmacology is the opposition to the negative consequences of psycho emotional stress and oxidative stress. The development of oxidative stress is the rationale for finding drugs with an antioxidant mechanism of action. The purpose of this work was to characterize the antioxidant and cytotoxic properties of the new synthesized drug (lithium salt of the amino acid cysteine) and to study the effect on the intensity of free radical processes. The drug synthesized by us is directed mainly to the processes of lipid peroxidation and the antioxidant system, which, in our opinion, is due to the pharmacodynamics of the drug.

The decrease in duration and quality of life is associated with an increase in the number of neurodegenerative diseases, in which the oxidative stress is the oxidative stress [1]. Therefore, the actual problem of modern medicine and pharmacology is the opposition to the negative consequences of psychoemotional stress and oxidative stress. It is known that the formation and development of oxidative stress is caused by the hyper production of active forms of oxygen by bioenergetic and neurochemical systems of the brain. The brain takes the first place among other tissues in terms of the amount of oxygen consumed per unit weight. This level is so large that conversion to a superoxide radical anion of only 0.1% of oxygen-metabolized neurons may prove toxic to this tissue [2]. ROS under oxidizing conditions modifies proteins, lipids, DNA, membranes and other organelles of a neuron [3,4]. The development of oxidative stress is the rationale for finding drugs with an antioxidant mechanism of action.

Characterize the antioxidant and cytotoxic properties of the new synthesized preparation (lithium salt of the amino acid cysteine) and study the effect on the intensity of free radical processes.

Method of determination of antioxidative activity

Methods for the isolation of subcellular fractions

The animals were decapitated, the brain tissue was ground and homogenized in a medium containing 0.25 M sucrose and 0.01 M Tris-HCl buffer (pH 7.4). Subcellular organelles were separated by centrifugation: the nucleus-at 1000 g for 15 min; Mitochondria-at 14000 g for 20 min (centrifuge K-24, GDR). The purity of the mitochondria obtained was assessed by the content of cardiolipin in the mitochondria and is absent in the mitochondrial fraction [6] as well as by electron microscopic data.

Figure 1 shows the kinetic curves of accumulation of lipid peroxides in the oxidation of pure methyl oleate (1); In combination with a lipid extract (2); In combination with a lipid extract and the test preparation-concentration 10-6 (3); Concentration 10-8 (4); and Concentration 10-10 (5). As can be seen from the figure, with the introduction of the drug, an increase in the induction period is observed-the accumulation of 0.02 mmol of peroxides (D?/p), if during the oxidation of pure methyl oleate 0.02 mmol of peroxides are formed within 1 day, then upon administration of the preparation this amount is formed already for 4 days. 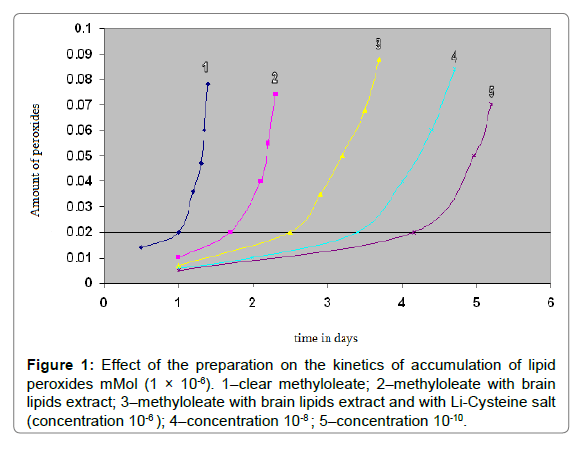 Addition of the drug in various concentrations in the oxidative cell has an inhibitory effect on its oxidation, which indicates the antioxidant nature of the preparation.

The antioxidant effect of the drug was also studied in the model system by the amount of MDA and HP in the presence of prooxidants. As the results of the study showed, the addition of a lithium salt of cysteine to the samples with homogenate of the brain tissue led to a decrease in the formation of HP and MDA (Figure 2), with low doses of the drug being more effective. 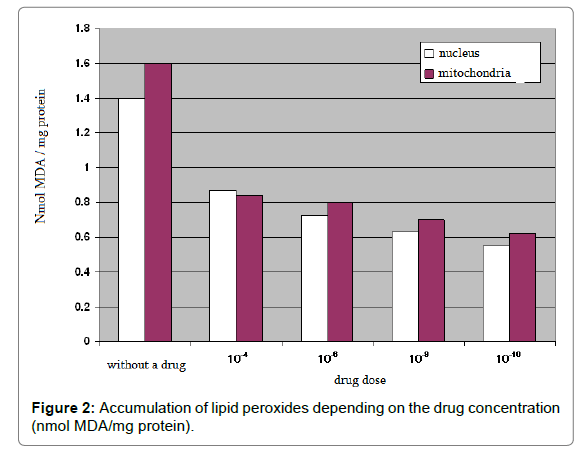 Figure 2: Accumulation of lipid peroxides depending on the drug concentration (nmol MDA/mg protein).

As shown by the results of the study, the lithium salt of cysteine is not cytotoxic with respect to human KCL-22 cells. The level of cell survival began to decrease reliably beginning at a concentration of 10 mg/ml, but even at the maximum concentration (1000 mg/ml) studied, cell survival was 75% (Figure 3). 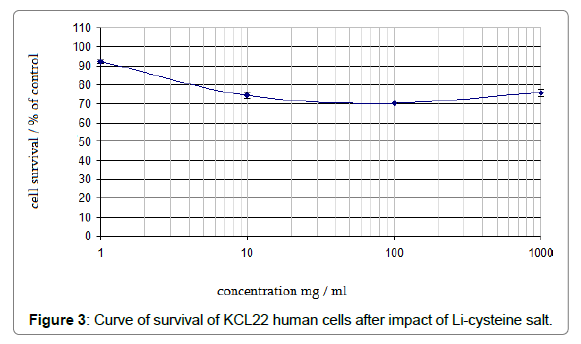 Figure 3: Curve of survival of KCL22 human cells after impact of Li-cysteine salt.

Thus, the lithium salt of cysteine is not cytotoxic. The preparation synthesized by us is directed, mainly, to processes of lipid peroxidation and antioxidant system, which, in our opinion, is due to the pharmacodynamics of the drug.