Copyright: © 2014 Zhang Q, et al. This is an open-access article distributed under the terms of the Creative Commons Attribution License, which permits unrestricted use, distribution, and reproduction in any medium, provided the original author and source are credited.

Guizhou province is one of the main phosphate resources base in China, characterized with the co-existence of rare earth in the phosphate rock. In this work, the phosphate rock samples in Zhijin County, Guizhou province have been collected and analyzed using ICP, X-Ray diffraction, Scanning microscope, Infrared spectra and X-ray photoelectron spectroscope. It is found that the total content of rare earth elements in the phosphate rock is about 0.1 wt%, amongst which Y, La, Ce, Pr, Nd and Sm are the main rare-earth components and co-sit the lattice of the apatite. The phosphate content in the as-collected rock is more than 20 wt%, and impurities such as quartz, calcite and clay are also present. The raw phosphate rock physically was treated with flotation to remove the impurities such as quartz and calcite; a refined phosphate with rare earth elements of more than 0.1 wt%. The refined phosphate rock is then treated with excessive H3PO4 to dissolve the apatite; the residue from the dissolution gives an earth enriched precipitation, which contains up to 2 wt% rare earth elements. Compared to the conventional way to use H2SO4 to extract phosphate, the treatment of the refined phosphate with phosphoric acid leads to significantly improved rare earth oxide extraction.

A vast phosphate rock sedimentary reserve has been discovered in Guizhou province, south west of China, which is named as Kaiyang Phosphate Rock Reserve [1,2]. The characteristics of the phosphate reserve are that its phosphate content is relatively low, but it has some heavy rare earth elements such as yttrium and light rare earth such as lanthanum and cerium. Therefore this reserve is regarded as a vast phosphate reserve as well as a resource for rare earth oxides. However, the phosphorus content is in the range from 17 wt% to 24 wt%, which is poor to medium grade phosphate rock reserve [3-5].

In terms of composition, the phosphorus rock reserve can be classified into agglomerate siliceous phosphate, phosphate rock containing dolomite and bioclast. The phosphate rock is mainly composed of calcite floroapatite, which is present in the form of noncrystalline, cryptocrystalline and colloid rock. Their main gangue is calcite, dolomite, and ankerite [5-7].

The impurities in the reserves include dolomite, calcite, quartz, clay, sphalerite and pyrite. The key feature of Kaiyang Phosphorite reserve is that it contains some amount of rare earth elements especially yttrium and light rare earth such as La, Ce, however, the content is lower [8-10].

Up to now, there has been lots of research into upgrading and extracting phosphate from the rock, which normally adopts the milling, flotation followed by acid leaching approach. This is a general processing adopted for all the phosphate rock [2], which mostly enriches the phosphate, but the rare earth element may be lost with the gangue. There has been little detailed structure and characteristic analysis on the Kaiyang phosphorus rock and the way to benefit both phosphate and rare earth has not been reported.

The crystalline structure and phase component of the samples were determined by X-ray diffraction (XRD) using a Philips X-PeRT Pro Alpha 1 diffractometer operating with Cu Kα radiation (λ=1.5406 Å) at a tube current of 40 mA and a voltage of 45 kV. Data were collected over 2θ values from 20° to 80° at a speed of 1°/min.

The X-ray photoelectron spectroscopy (XPS) measurements were carried out using a Perkin-Elmer RBD upgraded PHI-5000C ESCA system with monochromatic Mg Kα excitation and a charge neutralizer. All bonding energies were calibrated to the C 1s peak at 284.8 eV of the surface adventitious carbon.

Fourier transform infra-red (FTIR) spectra were carried out by diffused reflectance using a Bruker Vertex-70. The geometry and morphology of the phosphate rock at different stages were investigated by JSM840F scanning electron microscopy (SEM), and the element analysis were determined by energy dispersive X-ray (EDX) in the scanning SEM mode.

A 40 mL hanging cell floatation machine is applied to conduct pure phosphate rock flotation tests. The rock sample of each test is 1.5 g, adding 25 ml distilled water, the action times of modifier and collector are kept for 1 minute in both cases, the floated sample is collected, filtered and weighed, and the recovery yield is calculated

*The data are from ICP analysis 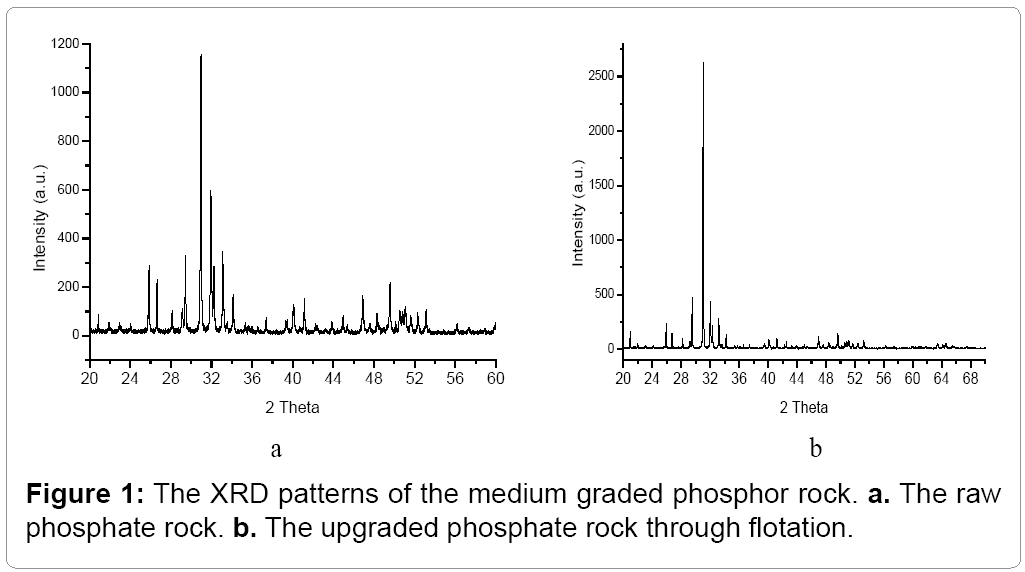 The infrared spectra of the raw Kaiyang phosphate rock are shown in Figure 2. The raw phosphate rock has the main peaks at around 1035, 602 and 501 cm-1 are ascribed to the apatite, maybe due to the rare earth existence in the lattice of the fluorapatite phosphate, the frequencies of the P=O vibrations tends to be lower than the ones containing no rare earth [13-15]. Figure 2: IR spectra of the Kaiyang phosphate rock before and after flotation.

The X-ray photoelectron spectroscope (XPS) is a powerful tool to analyse the states of the elements and also their surface composition in the materials. In this work we used XPS to analyse the Kaiyang phosphate sample, and the results are shown in Table 3.

It is seen that the surface of the raw Kaiyang phosphate rock is mainly covered with oxygen element, which can be understood as the phosphate, quartz, calcite and even dolomite all contain oxygen. The surface phosphorus content is only 4.68 at%, which is in the form of PO3-, as confirmed by XRD (Figure 1), which showed that the phosphorus is phosphite and not phosphate group. The carbon may come from calcite or the surface contained carbon. Silica content in the surface is about 3.52 at%. It is interesting to see that although there are La, Ce as evidenced by ICP-MS and XRD, the surface of the raw phosphate sample has Y, whose content is about 0.661 at%. The F is also in the form of metal fluoride attach to the Ca, but no separate CaF2 detected in the XRD, suggesting that the F and Y may co-exist with the phosphate.

The physical floated sample to upgrade the phosphate rock

To remove the gangue in the rock, the raw phosphate rock was floated with a water solution of pH at 5.0 with fatty acid as the collector. The P2O5 content can be upgraded to 33.85 wt% with recovery rate of 60%.

The composition of the floated sample is given in Table 4. It is seen that the P2O5 increases with F and rare earth oxides while the MgO, SiO2 and Al2O3 decrease significantly, this further supports the XRD results, which show that the phosphate, F and rare earth elements coexist in the rock. The less significant change of CaO content is due to the Ca present in both the apatite and also dolomite and calcite.

The XRD pattern of the floated phosphate rock is shown in Figure 1b, it is seen that the gangue phase such as SiO2 and CaCO3 decreases significantly while the main phase, the rare earth containing calcium fluor phosphate increase in intensity, which is in agreement with the elemental analysis results.

The IR spectrum of the refined phosphate rock is also shown in Figure 2. These intensities of the bands correspond to SiO2 and CaCO3 drop while the ones arising from PO3 - increase, in agreement with the XRD results.

The XRD and IR results give the bulk composition of the floated phosphate sample, the surface composition of the sample were analysed using XPS, and the results are shown in Table 2. It is seen that the states of the elements e.g., the binding energy position, of the P, Ca, Si, F and Re do not change compared to the raw sample, suggesting that the flotation does not change the surface property. However the composition of the element content changes. The P, F and Y content increases while the Ca and Si decrease. It is interesting that no Al or Mg is detected in XPS results, which may be covered by the phosphate, and rare earth metals.

Phosphate rock is most often used for fertilizer or phosphoric acid production using sulfuric acid extraction into the process of phosphoric acid production. Phosphoric acid is normally produced by a wetprocess, in which the phosphate rock reacts with a mixture of sulphuric acid. Calcium sulphate is the solid precipitation and aide products such as phosphogypsum and can be filtered away. In this way, the rare earth can easily get lost in the filtered precipitation. The sulfuric acid extract process is shown as follows:

The rare earth elements may react with sulfuric acid to give Re2(SO4)3, however, the reaction may not be favored as the RePO4 is much more stable than Re2(SO4)3.

It is seen that there is not a big difference between the rare earth element in the residue and the one in the raw phosphate rock, although the heavy re like Y is significantly concentrated in the residue. This is that the heavy Re sultate is less soluble in the the extract system.

Here we tried to use 50% H3PO4 to treat floated phosphate rock at the ratio of the rock to acid ratio 1:4, we found that most rock was dissolved in the solution, which can be expressed as follows:

This is a soluble solution, while the RePO4 is insoluble in the aqueous system, which is highly concentrated with the gangue such as SiO2 and clay.

The elemental analysis of the residue in the H3PO4 treated system has been analysed for the rare earth content and the result is shown in Table 6.

It is noted that a significant concentration of rare earth has been achieved in the residue of the H3PO4 extracted system. The Y content is as high as 0.698 wt% in the residue, which can be further refined for rare earth extraction.

The Kaiyang phosphate rock samples have been analyzed using elemental analysis, XRD, IR and XPS for its composition and the rare earth content. It is seen that the P2O5 in the phosphate rock is about 25 wt%, which is mainly in fluoapatite form, while there is quartz and calcite and dolomite present in the raw rock. The rare earth elements include light, such as La, Ce and heavy rare earth like Y.

The rare earth and F co-exist in the lattice of the calcium rare fluroapatite, while the surface of the raw phosphate rock is mainly covered with Ca, O, F, P, and interestingly Y, which are mostly present in oxide form.

The flotation process can upgrade the phosphate rock and increase the P2O5 content to 33 wt% with more than 60% of recovery rate. The process increases the content of P, Ca, F and rare earth in the upgraded sample, suggesting that these elements exist in the same phase. The flotation removes mostly MgO, some quartz and calcite, but did not change the surface status of the elements.

We would like to thank the Ministry of Science and Technology of China for the financial support for the international collaboration between Guizhou University and Dr Tiancun Xiao from Oxford University.