Copyright: ©2015 Gupta M, et al. This is an open-access article distributed under the terms of the Creative Commons Attribution License, which permits unrestricted use, distribution, and reproduction in any medium, provided the original author and source are credited.

Anomaly in the number of teeth may manifest as a supernumerary tooth. Occurrence of a supernumerary tooth in the mandibular incisor region is uncommon. This report presents a rare case of five mandibular permanent incisors in a nine year old non-syndrome healthy male child. Clinical and radiographic examination revealed the presence of a supplemental (type of supernumerary) permanent incisor in the mandibular arch. Recognition of tooth anomalies is important during routine examination. Detection of supernumerary teeth is best achieved by thorough clinical and radiographic evaluation.  Dentists should be aware of this condition when unusual crowding and displacement is seen in the mandibular incisor region. Early diagnosis may provide a better opportunity for optimal treatment outcome.

The etiology of supernumerary teeth is not completely understood. One theory suggests that the supernumerary tooth is created as a result of a dichotomy of the tooth bud. The hyperactivity theory states that supernumeraries are formed as a result of local, independent, conditioned hyperactivity of the dental lamina [11]. Heredity may also play a role in the occurrence of this anomaly, as supernumeraries are more common in the relatives of affected children than in the general population. However, this does not follow a simple Mendelian pattern [1].

1.Wait and watch in cases which have no effect on the developing dentition. This includes asymptomatic cases which do not hamper the eruption of teeth, and those with no active associated pathology

A nine year old normal and healthy boy reported to Department of Pedodontics and Preventive dentistry, with a chief complaint of sensitivity associated with trauma to an upper front tooth. The patient had a fall while playing and time lapse since the injury was 48 hours. His medical history was uneventful. Family history was non-contributory.

Extra oral examination revealed a convex profile and facial symmetry. Intra-oral examination showed marginal gingivitis in the maxillary anterior region. There was an Ellis’ Class II fracture of the maxillary permanent right central incisor. The patient had an increased over jet of 4mm and silver amalgam restoration of mandibular right primary second molar. In the mandibular anterior region, five permanent incisors were present. On the right side, there were three incisors, one of which was slightly rotated in a mesio-lingual version. All the incisors showed similar morphology with the presence of mammelons (Figure 1). Radiographic investigation confirmed the presence of a permanent supplemental tooth in the mandibular right incisor region. Roots of both central incisors showed apical closure. The supplemental incisor had an individual root with a single relatively wide root canal (Figure 2). An orthopantamograph was also taken to identify the presence of any additional and/or missing teeth (Figure 3). 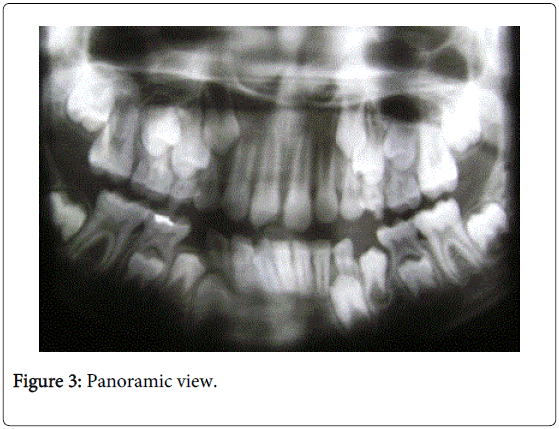 The patient was referred to a pediatrician for detection of any other finding and/or syndrome. There was no abnormality reported. Dental treatment included esthetic restoration of the fractured maxillary permanent right central incisor with composite resin. The patient has been advised to be on a periodic follow-up.

Supplemental teeth refer to a duplication of teeth in the normal series and are found at the end of a tooth series [1]. Very few cases of supplemental mandibular permanent incisors have been reported in literature [12-14]. Hyperplasia of tooth germs may occur in areas with wide intervals between tooth primordiums at the end of the dental lamina. Therefore, it does not easily occur in the mandibular anterior tooth, where there is a high inter-tooth primordium density. Therefore, occurrence of mandibular anterior supernumerary teeth is exceedingly low [15]. It is usually difficult to differentiate clinically between a normal tooth and supplemental tooth. In this case, rotation of the incisor associated with a wider root canal indicated it to be the supplemental incisor.

Erupted supplemental teeth most often cause crowding. The problem may be resolved by extracting the most displaced or deformed tooth. In this case, since there was no tooth-arch discrepancy, the supplemental incisor was not extracted. However, parents of the child were informed of presence of an additional tooth, and the need for subsequent treatment. In conclusion, a rare case of mandibular supplemental teeth is reported. Careful clinical and radiographic examination is essential for the detection of dental anomalies.