Journal of Nutrition Science Research
Make the best use of Scientific Research and information from our 700+ peer reviewed, Open Access Journals that operates with the help of 50,000+ Editorial Board Members and esteemed reviewers and 1000+ Scientific associations in Medical, Clinical, Pharmaceutical, Engineering, Technology and Management Fields.
Meet Inspiring Speakers and Experts at our 3000+ Global Conferenceseries Events with over 600+ Conferences, 1200+ Symposiums and 1200+ Workshops on Medical, Pharma, Engineering, Science, Technology and Business

Copyright: © 2016 Indranil M, et al. This is an open-access article distributed under the terms of the Creative Commons Attribution License, which permits unrestricted use, distribution, and reproduction in any medium, provided the original author and source are credited.

Creatine has beneficial effect on strength training athletes, but it is not clear whether it has any effect on endurance sport. Present study has been designed to investigate the effect of creatine supplementation on cardiovascular adaptation to sub maximal exercise and endurance performance. A total of 60 male athletes (age range 16-19 years) were selected and randomly divided into experimental group (EG, n = 30) and control group (CG, n = 30) and supplemented with 5 g per day of creatine monohydrate (CrM) and moltodextrine, respectively for 4 weeks. A treadmill test was performed to determine the heart rate responses to sub maximal exercise and maximal endurance performance. Blood lactate was measured at the end of exercise. Body mass, body fat and fat free mass were also measured. Repeated measure ANOA followed by t-test was applied to analyze the data. Significant decreases in heart rates were noted in the experimental group during sub maximal exercise when compared to the control group. Moreover, the maximal endurance time was increase in the experimental group after supplementation of CrM when compared to control group. However, no significant change has been observed in resting heart, maximal heart rate, recovery heart rate, body mass, body fat, fat free mass and blood lactate level.

Interest of creatine supplementation in exercise and conditioning is increasing day by day [1-3]. Creatine is a naturally occurring crystalline molecule that includes atoms of carbon, hydrogen, nitrogen and oxygen (C4H9N3O2). Creatine plays a vital role in the release of energy in the muscles of humans [4]. In muscle, creatine is reversibly converted to phospho-creatine (PCr) by the enzyme creatine kinase (CK). PCr acts as reservoir for ATP in the muscle. ATP is the molecule that is used to produce the contraction of the muscles proteins. The cellular concentration of creatine is determined by the muscles ability to take up creatine because muscle cannot make it [5]. Creatine is synthesized in the liver, kidney and released into the blood stream to be actively taken up by the muscle cells. The liver plays a central role in the control of creatine in the body [5,6].

For the present study 60 endurance-trained athletes (middle distance runners of National levels, physical characteristics in Table 1) gave their informed written consent to participate in this study Accordingly, all the subjects underwent medical checkup, and were randomly divided into 2 groups: (1) experimental group (EG, n = 30; age: 18.5 ± 1.4 yrs, height: 176.5 ± 6.7 cm, weight: 63.1 ± 5.1 kg) and (2) control group (CG, n = 30; age: 18.8 ± 3.1 yrs, height: 175.2 ± 8.9 cm, weight: 62.3 ± 5.8 kg). Participants were advised not to engage in strenuous activities two days before an exercise test and not to exercise on the day of the test. Individuals were requested to maintain their normal diet and to refrain from alcohol and caffeinated beverage in the one week preceding the experiment and throughout the experiment. The study was performed in Sports Authority of India and was approved by the committee of the Institute.

Each value represent mean ± SEM n = 30. (Repeated measure ANOVA followed by post-hoc analysis). Values were not significantly different from each other. NS = not significant.

A dose of 5 g per day of creatine monohydrate (CrM) (ANS Co., India) and maltodextrine (Sigma Chemical Co., USA) was given orally for a period of 4 weeks to the experimental group and control group respectively. An exercise protocol was performed for determination of cardiovascular adaptation to sub maximal exercise and maximal endurance performance. Body mass, body fat and fat free mass were measured. Each test was scheduled at a similar time of day (± 1 hour) in order to minimize the effect of diurnal variation. All the parameters were measured before (test 1) and after (test 2) the supplementation. During the 4 weeks of supplementation same training program was employed for both the groups.

Body mass was measured with the accurately calibrated electronic scale (Seca Alpha 770, Birmingham, UK) to the nearest of 0.1 kg, and stature with stadiometer (Seca 220, Birmingham, UK) recorded to the nearest 0.5 cm [18]. Body density was estimated from the sum of the skin-fold sites based on the standard procedure [19]. Estimation of percentage body fat was calculated using standard equation [20]. Fat free mass was calculated by subtracting fat mass from total body mass.

The subjects were given a trial run on treadmill (Jarger LE 500, Germany) one week before the experiment in order to familiarize. A treadmill test was performed to determine the heart rate responses to graded exercise so as to find out the sub maximal responses in cardiovascular system [21]. Time taken till exhaustion was noted to determine maximal endurance performance. The test protocol starts with 8-km/h speed and thereafter increased by 2 km/h after every 2 min. This was continued until the subject got exhausted. Resting heart rate was taken 30 min before the experiment. Maximal heart rate and recovery heart rates were also noted [21].

Repeated measure ANOVA followed by post-hoc analysis was used to test for effects due to supplementation of creatine monohydrate and maltodextrine in experimental and control groups. Results were expressed as mean ± standard error of mean (SEM). All statistical analysis was performed using the 10.0 release version of SPSS for Windows (SPSS Inc., USA).

It has been observed that supplementation of CrM has no significant effect on body mass, body fat and fat free mass when comparing the data test 1 and test 2 (Table 1).

Each value represent mean ± SEM n = 30. (Repeated measure ANOVA followed by post-hoc analysis). Values were not significantly different from each other.*P<0.05 when compared the data within the groups (test 1 and test 2 in control group, test 1 and test 2 of experimental group). $P<0.05 when compared the data between the groups.NS: Not Significant. 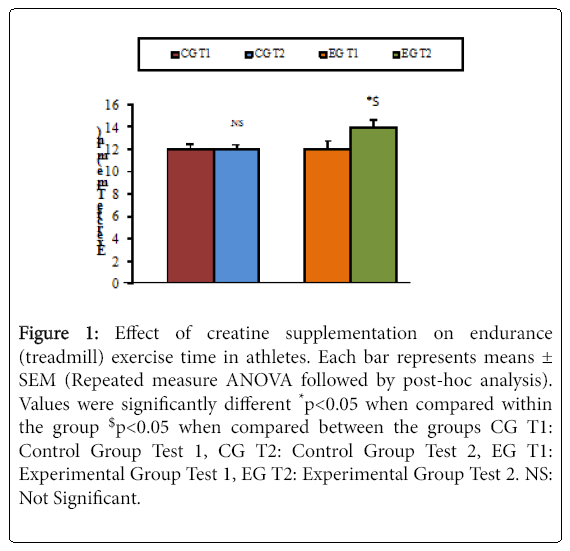 Blood lactate concentration was measured before and after the exercise and no significant change has been noted after the supplementation of creatine monohydrate among the groups (Figure 2). 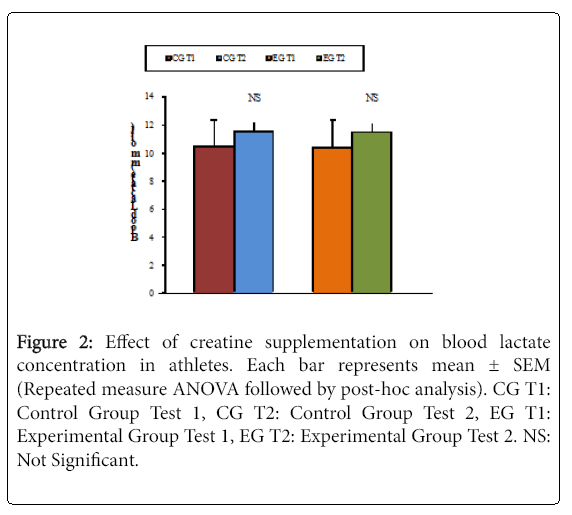 In the present study, cardiovascular adaptations to sub maximal exercise have shown to increase in the experimental group after creatine supplementation. This was again confirmed by significant decreased in heart rate in test 2 in experimental group when compared to control group. In sub maximal exercise (treadmill speed 8-12 km/h) a significant decrease in heart rate has been noted in experimental group. In the control group significant decrease in heart rate response has been noted only at initial stage (treadmill speed 8 km/h). This might be defined as the effect of training. To nullify the effect of training we compared the heart rate responses obtained in test 2 of control to that of experimental, and a significant improvement have been noted in experimental group. Therefore, it may be stated that this improvement in cardiovascular adaptation during sub maximal exercise may be due to effect of creatine supplementation. Similar observations have been noted by many researchers [13-17]. However, another study reported that creatine supplementation does not enhance submaximal aerobic training adaptations in healthy young men and women [26].

The authors wish to thank Mr. Haramal Singh, athletics coach, Sports Authority of India, New Delhi for his active participation and support to carry out the present study.