Background: HIV-TB co-infection is “bidirectional and synergistic”. HIV promotes the progression of latent tuberculosis infection to disease and tuberculosis accelerates the progression of HIV disease to its advanced stage. To date, there have been limited clinical data regarding survival rates among TB/HIV co-infected patients and the impact of antiretroviral therapy on clinical outcomes in developing countries. Therefore, this study assessed the predictors of TB/HIV associated mortality in a cohort of HIV infected patients treated with antiretroviral therapy in Jimma University Teaching Hospital.

Methods: Retrospective study was conducted in Jimma University Teaching Hospital from September 01, 2010 to August 31, 2012. All records of adult TB-HIV co-infected patients who follow TB-HIV care in Jimma University Teaching Hospital between 01 September of 2010 and 31 August of 2012 were retrieved. Data were entered by Epidata and was exported to SPSS version 19. Data were analyzed using proportional hazards cox model with stepwise variable selection to identify independent predictors. P value below 0.05 was considered statistically significant in the final model.

Conclusions: More than 1 in 5 TB-HIV co-infected individuals died. The independent predictors were age between 35-44 years, being student and commercial sex worker, bed ridden functional status, and WHO stages 2, 3, and 4. Therefore, attention should be given to reduce the considerable amount of death, and specific intervention should be designed focusing on the independent predictors.

TB/HIV co-infection is “bidirectional and synergistic in which HIV promotes the progression of latent tuberculosis infection to disease, and tuberculosis accelerates the progression of HIV disease to its advanced stage [1]. HIV is the main reason for failure to meet Tuberculosis (TB) control targets in high HIV settings; as well TB is a major cause of death among people living with HIV [2]. According to 2010 WHO report on TB profiles of different countries, Ethiopia is classified as high burden TB, High burden HIV and high burden MDR-TB [2]. The prevalence rate was estimated to be 394 (173-623) per 100000 populations including those co-infected with HIV, and there were 152,030 new cases of which 3,190 are below 15 years of age [2].

Globally, TB remains among the leading causes of death from an infectious agent. In 2008, of the estimated 9.4 million incident cases of TB, 1.4 million were in people living with HIV and TB accounted for 23% of AIDS-related deaths [3-5]. Different studies stated that, TB is often the ?rst manifestation of HIV infection, and it is the leading cause of death among HIV-infected patients in Africa [6,7]. It is estimated that almost 33% of all people living with HIV-1 are co-infected with TB. In parts of sub-Saharan Africa up to 70% of Tb patients are co-infected with HIV [8]. In Ethiopia, a cross-sectional study revealed that the rate of HIV infection in TB patients was 18% ranging from 8.3% (in Silte zone) to 35.3% (in South Omo zone) [9].

There are different factors affecting the survival of Tb/HIV co-infection. Age, gender, marital status, level of education, religion, occupation, residence, weight, AIDS staging, TB clinical presentation and calendar year were predictors [10,11]. To date, there have been limited clinical data regarding survival rates among HIV/TB co-infected patients and the impact of antiretroviral therapy (ART) on clinical outcomes in developing countries like Ethiopia. Besides, few studies have analyzed factors associated with survival in HIV-infected TB patients taking into account drug susceptibility patterns of Mycobacterium tuberculosis. We, therefore, conducted this study to look at the survival rate of TB/HIV co-infected patients and to gain better insight on associated factors.

A retrospective cohort study using ART records from September 01, 2010 to August 31, 2012 was conducted in Jimma University Teaching Hospital (JUTH). The hospital is located in 355 km towards southwest of Ethiopia.

All adults aged 15 years and above who follow TB-HIV care in JUTH were the population. Incomplete records were excluded from analysis.

Data extraction checklist was used to extract information from the patient cards, registration and log books. Data were entered by Epi-data and was exported to SPSS version 19.0 for windows for analysis. The data were cleaned and edited before analysis. Data exploration was undertaken to see if there are odd codes or items that were not logical and then subsequent editing was made. The main end point in this study was death from TB/HIV co-infection. Individuals defaulted, lost to follow up, transfer out and survivors at the end of the study period were considered as censored. Finally, the out-come of each subject was dichotomized in to censored or recovered. The patient cohort characteristics was described in terms of mean, median, standard deviations, and range values for continuous data; percentage, frequency tables and charts/graphs for categorical data. For the comparison of time to recovery among the different groups of patients, Kaplan Meir curve was used. The proportional hazards cox model with stepwise variable selection procedural was used to identify independent predictors of survival. The assumption for proportional hazard was assessed graphically by log minus log survival curve. P-value less than or equal to 5% was considered significant.

Baseline socio-demographic and economic characteristics of the study subjects A total of 272 TB-HIV co-infected patients were followed for a mean of 340 days. In this study, the mean age of the study subjects were 32(+8.53) years with a majority of them lying between 25-34 years age. Females (58.1%), daily labourers (31.6%), formally educated (51.5%), Muslim (49.3%), married (60.7%) and urban dwellers (69.5%) were the dominant study participants. Almost three fourth of them live with less than 5 people and do have water and electricity. A considerable amount (44.5%) of study participants has 1 living room (Table 1).

Clinical and behavioral characteristics of the study subjects In the cohort, 176 (64.7%) study subjects had disclosed about their status to the nearest person. Majority of the patients were on first line regimen, working functional status and WHO stage-III. Pulmonary TB accounted more than extra pulmonary or mixed TB type and the mode of entry was relapse in above 85% of the participants. Nearly 70% of their partners were positive and above 70% of study participants had risky behaviour. Surprisingly, 83% of them didn’t use condom (Table 2).

Survival status of study participants A total of 55 (20.2%) Tb HIV co-infected patients were died in the year September 2010 to August 2012.

The survival status by sex, functional status, WHO stage and CD4 category is described by the Kaplan-Meier figures (Figures 1-3). 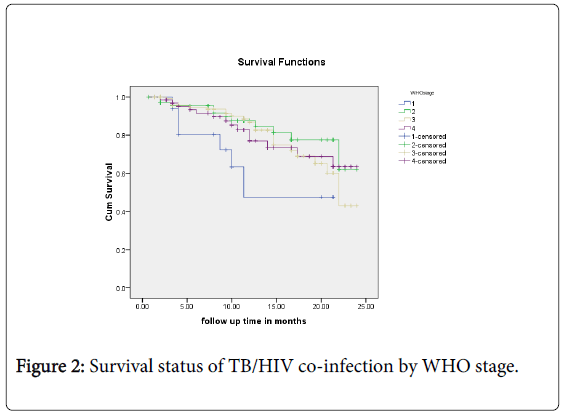 Figure 2: Survival status of TB/HIV co-infection by WHO stage. 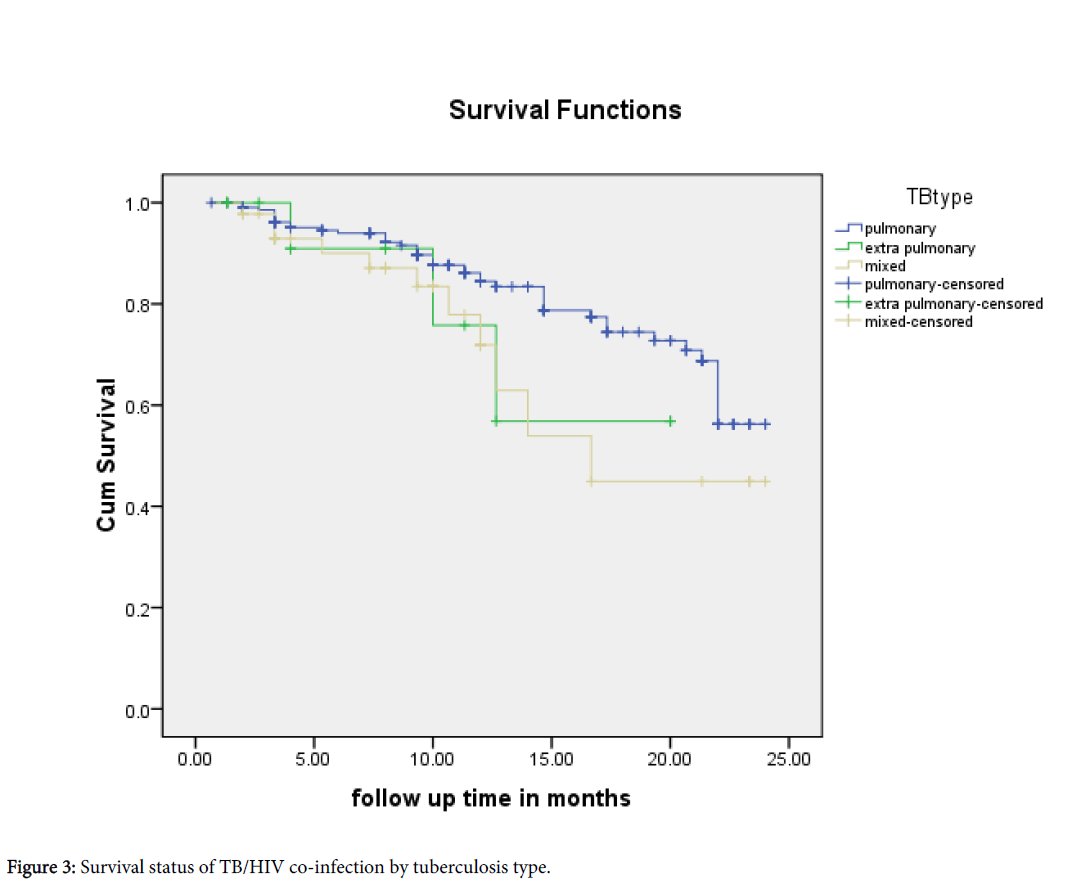 Predictors of mortality in TB-HIV co-infected patients during TB treatment Bivariate cox regression analysis showed that the risk of death was statistically different by age, educational status, occupation and WHO stage.

After adjustment, checking for interaction and fitness of the model, age between 35-44 years, being student and commercial sex worker, bed ridden functional status, and WHO stages 2, 3, and 4 were independent predictors in the multiple Cox regression analysis (Table 3).

This study revealed the problem of high mortality of TB-HIV co-infected patients. More than 1 in 5 TB-HIV co-infected (20.2%) individuals died during TB treatment and this is consistent with the study conducted in Bahir Dar in 2012 [12].

Results from this study demonstrated that age between 35-44 years, being commercial sex worker, bed ridden functional status, and WHO stages 2, 3, and 4 were independent predictors affecting mortality of TB/HIV co-infected patients.

Lastly, patients in WHO stages 2, 3 and 4 compared to stage 1 were found protective for mortality risk. The risk of death in patients diagnosed as WHO stage III was decreased by 70% (AHR=0.3; 95%CI: 0.1-0.8) compared to WHO stage I patients. The possible reason could be due to Immune reconstitution syndrome during their stage I, and their experience to develop self-care. The major limitation of this study is the small sample size on top of its being retrospective study.

In conclusion, more than 1 in 5 TB/HIV co-infected individuals died during TB treatment. Age between 35-44 years, being student and commercial sex worker, bed ridden functional status, and WHO stages 2, 3, and 4 were the independent predictors affecting mortality of TB-HIV co-infected patients. Therefore, since the death is a significant number, strategies to reduce this considerable amount including availability of ARVs should be applied to. A special attention should also be given for the independently associated factors. Researchers can conduct using a primary study and/or large sample size to really deal out the predictors.

Copyright: © 2015 Abrha H, et al. This is an open-access article distributed under the terms of the Creative Commons Attribution License, which permits unrestricted use, distribution, and reproduction in any medium, provided the original author and source are credited. 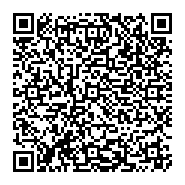