The Ascidian Ciona Intestinalis as Model Organism for Ecotoxicological Bioassays

Copyright: © 2015 Gallo A, et al. This is an open-access article distributed under the terms of the Creative Commons Attribution License, which permits unrestricted use, distribution, and reproduction in any medium, provided the original author and source are credited.

The increase of pollutants in the oceans as well as the global change around the world is having a negative impact on the biodiversity of living organisms. There is a crescent alarm in the scientific community for the different types of pollution (biological, chemical and physical) and for the changes occurring at the level of species and communities. Many parameters endangering marine wildlife contribute to create an unhealthy marine environment that induces reproductive disorders that, in turn, may influence even the survival of marine wildlife.

Ascidians, or sea squirts, are sessile marine invertebrates commonly found throughout the world. They have been largely used as models for developmental biology since the last century [1]. The advantage of using ascidians for studies of reproduction and development is their large number of oocytes, their synchronous arrest in the metaphase of the first meiotic division, the rapid embryo development that generates swimming larvae around 18-24 hr post-fertilization, and the small number of cells and few tissues in the adult. Ciona intestinalis is among the most studied ascidian, and its genome is well established since from 2003 [2].

From an experimental point of view, Ciona oocytes are relatively easy to manipulate and microinject, this further advantage has rendered this species a model to study reproductive mechanisms and meiotic regulation [3-6]. Ciona releases gametes (oocytes and sperm) into sea water where fertilization and embryo development occur. These are processes very sensitive to substances present in the environment that come from industrial and agricultural activities and to chemicalphysical variations of the environment (e.g., acidification, thermal elevation).

As filter feeders organisms, ascidians filter food from the incoming water and all the substances present in the environment are trapped on the pharyngeal mucus which is produced by the organ homologous to the mammalian thyroid. Consequently, ascidians are able to accumulate and concentrate harmful toxicants present in low concentrations in the surrounding water column [7]. Recently, it has been shown that ascidians are able to accumulate heavy metals such as vanadium and cadmium [8,9].

In this respect, a large body of literature reports the adverse impact of different type of stressors at the biochemical and cellular levels of ascidians inducing endocrine disruption and reproductive disorders with consequent fertilization success and reproductive fitness reduction and affecting in a long term even the survival of this cosmopolitan species [10-15].

Biomonitoring programs are aimed to evaluate the quality of the environment and require to identify model organisms able to function as bioindicators; these are defined as biological processes, species, or communities used to assess environmental toxicity [16].

The ideal bioindicator must be sessile for having not possibility to avoid the pollution source and filter-feeder since may process large amounts of water. In either cases they may provide a picture of environmental modifications as well as to identify polluted areas.

In the past, sea urchin has been considered the best bioindicator to evaluate environmental quality and, in particular, test on sperm and embryo development are from long time bioassays associated with monitoring [17,18]. Potential bioindicators to investigate pollutants impacts have been also recently proposed as molluscs [19], zebrafish [20] or others [21]. Since human is at the end of the food chain and human health is an end point for the research aimed to face up the threats of pollution and global change, there is evidence that deducing a human response to pollutants must come from comparing responses of organisms with similar physiology.

In our recent studies [22-24] we have provided evidences that Ciona intestinalis reproductive mechanisms are affected by either heavy metals or antifouling compounds. In particular, these xenobiotics exert an adverse impact on the gamete physiology, fertilization and larval development and morphology. The sensitivity to pollutants may partially explain the progressive reduction of Ciona populations observed in the last decades along the Neapolitan coast (personal communication).

Taken together these results are in favor to consider Ciona intestinalis a suitable bioindicator model due to its specific response to pollutants and its reproductive mechanisms may represent new bioassays for ecological risk assessment in the field of marine ecotoxicology (Figure 1). 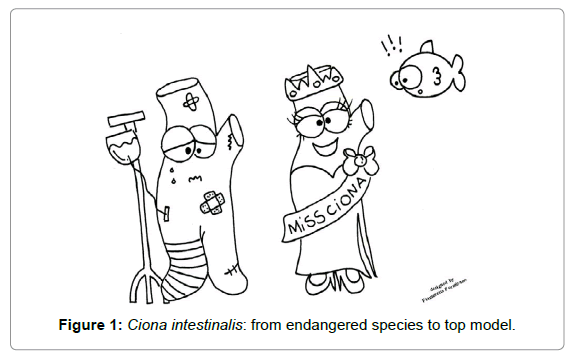