The Correlation of Seismic Activity and Recent Global Warming: 2016 Update

The Correlation of Seismic Activity and Recent Global Warming [1] (CSARGW) demonstrated that increasing seismic activity in the globe’s high geothermal flux areas (HGFA) is strongly correlated with global temperatures (r=0.785) from 1979-2015. The mechanism driving this correlation is amply documented and well understood by oceanographers and seismologists. Namely, increased seismic activity in the HGFA (i.e., the mid-ocean’s spreading zones) serves as a proxy indicator of higher geothermal flux in these regions. The HGFA include the Mid-Atlantic Ridge, the East Pacific Rise, the West Chile Rise, the Ridges of the Indian Ocean, and the Ridges of the Antarctic/Southern Ocean. This additional mid-ocean heating causes an acceleration of oceanic overturning and thermobaric convection, resulting in higher ocean temperatures and greater heat transport into the Arctic [2,3]. This manifests itself as an anomaly known as the “Arctic Amplification,” where the Arctic warms to a much greater degree than the rest of the globe (Table 1) [4,5].

Applying the same methodology employed in CSARGW, an updated analysis through 2016 adds new knowledge of this important relationship while strengthening support for that study’s conclusions. The correlation between HGFA seismic frequency and global temperatures moved higher with the addition of the 2016 data: the revised correlation now reads 0.814, up from 0.785 for the analysis through 2015. This yields a coefficient of determination of .662, indicating that HGFA seismicity accounts for roughly two-thirds of the variation in global temperatures since 1979. This is a remarkably high coefficient of determination when one considers the immense complexity of the global climate system. When both HGFA seismic frequency and atmospheric CO2 are entered as independent variables into multiple regression analysis, the seismic frequency emerges as the only significant variable in the model (P<0.05 for seismic frequency vs. P>0.05 for CO2 concentration). The lagged relationship between the HGFA seismic frequencies and temperature is illustrated in Figure 1. 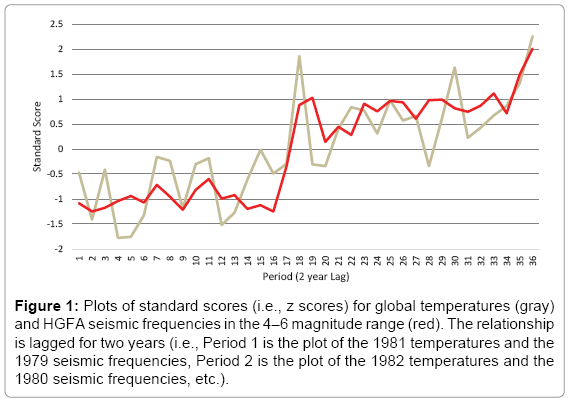 Equally important, the HGFA seismic frequencies accurately predicted the unusually powerful 2015/2016 El Niño, one of the strongest on record (Figure 2). As illustrated in CSARGW, jumps in HGFA seismic activity can amplify an El Niño event, a phenomenon referred to as a SIENA or a Seismically Induced El Niño Amplification [1]. Accurately predicting two of these amplified El Niños (i.e., the 2015/2016 event plus the1997/1998 episode) is an important outcome of the HGFA seismicity/temperature relationship. This can serve as a valuable forecasting tool for future SIENA events, providing opportunities for impacted populations to implement timely mitigation and/or adaptation strategies. 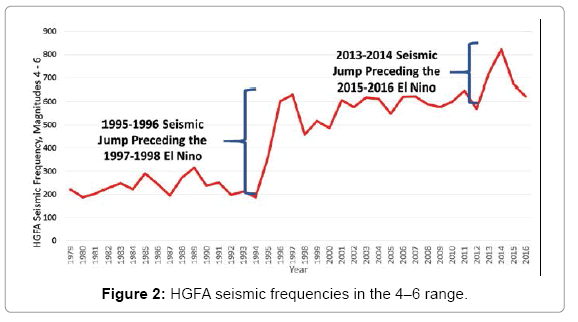 Future research should be founded on the continued monitoring of the HGFA seismicity/global temperature relationship, with an eye towards developing regional seismic analyses to complement bulk global averaging. As stated in CSARGW, any “tipping points” (i.e., notable moves upwards or downwards in the seismic frequencies) should be carefully monitored as potential harbingers of abrupt (and possibly significant) temperature change. Climate researchers should also look to incorporating geothermal inputs into general circulation models in order to improve the accuracy of these important analytical tools. Finally, developing a global network to monitor temperature changes in the HGFA would be a valuable addition to the geoscience toolkit.