Copyright: © 2016 Blasco JMI, et al. This is an open-access article distributed under the terms of the Creative Commons Attribution License, which permits unrestricted use, distribution, and reproduction in any medium, provided the original author and source are credited.

Aim: To evaluate effectiveness of daily intake of 300 mg Ovomet® (egg membrane) for treatment of osteoarthritis elderly patients. Methods: This prospective study consisted of 300 mg Ovomet® intake for 50 days in 20 osteoarthritis patients previously diagnosed by medical examination. We collected demographic data, joint stiffness and function measurement (medical check-ups) and intensity of pain data (Western Ontario and McMaster Universities Osteoarthritis Index, WOMAC questionnaire) at baseline, day 10, 20, 30, 40 and 50 of Ovomet® intake. The pain rate at beginning of the study (13.4/20) was classified as "very acute". There is a 35% significant improvement in overall joint at the end of the study. Results: Patients were male (55%) and female (45%) with a mean age of 73.5 ± 1.35 years (mean ± standard error). The daily intake of 300 mg Ovomet® caused a gradual and statistically significant reduction in pain and stiffness intensity, and improved the functional capacity since the early days of the study. At the end of the treatment, most of the patients (70% and 95%) had an improvement in pain and functionality levels equal to or more than 20% respectively. It should be pointed out that improvement in stiffness reached almost 60% after 50 days of Ovomet® intake. Conclusion: The daily intake of 300 mg Ovomet® for osteoarthritic treatment has been effective since the beginning. Ovomet® is presented as a natural alternative for the management of pain and disability that arthrosis causes, making a huge difference in life quality of elderly people.

Osteoarthritis (OA), the most common form of arthritis, is a chronic and progressive disorder that affects one or more joints in the body. The joints most often affected are hands, weight-bearing joints (such as knees and hips) and spine joints. This pathology has a great incidence in the global population, as its prevalence of OA is nearly 2-4% [1]. Furthermore, arthritis compromises the quality of life of patients and it is a common cause of disability in elderly patients. Actually, hip and knee OA it is the 11th highest contributor to global disability, when disability is measured by years lived with disability, as published in Lancet in 2012 [2]. Although its prevalence increases with age, being more common in women after menopause, it affects an increasingly significant number of people in the active population. The number of affected people is on the rise because of an aging population and the increased prevalence of risk factors such as obesity and sedentary behaviour in the developed countries [3].

OA is responsible for a very high number of primary healthcare visits as well as hip and knee replacement operations. However, the socioeconomic costs of OA is not only limited to the direct costs of healthcare use but also includes significant non-healthcare-related costs derived from productivity losses among other causes [3].

Despite various conservative and interventional treatment approaches, the overall management of the condition is problematic, and pain-the major clinical problem of the disease - remains suboptimally controlled.

Pharmacological therapy, with analgesic and anti-inflammatory drugs, directed to the prevention of pain and/or inflammation is the most common approach to treatment. These drugs include paracetamol, ibuprofen, naproxen, and celecoxib. However, there is a great concern about the safety of these drugs within the medical community and among the patients [4]. Side effects associated to longterm use of these drugs include liver damage, in the case of paracetamol and NSAID, and stomach upset, gastric bleeding, cardiovascular problems and kidney damage, in the case of NSAID [5]. Moreover, these therapies are directed to the reduction of pain and their impact on disease progression is limited.

Currently, a number of dietary supplements are being extensively used for the treatment of OA. Glucosamine and chondroitin sulfate are two of the most commonly used complementary medicines. Taken alone or in combination, they have a good safety profile and a variety of therapeutic effects, such as reducing pain and improving function, revealed by in vitro studies [6-10] and in clinical trials [11-14]. Nevertheless, the significance of their clinical effectiveness is on debate due to certain inconclusive results of the clinical trials, probably due to lack of homogeneity of methodological criteria [15].

Eggshell membrane discovery as a natural source of glycosaminoglycans, such as chondroitin sulfate and hyaluronic acid among others, has led to the consideration of this product as a potential approach for the treatment of arthritis [16-18]. Previous studies have reported the therapeutic efficacy of the components of eggshells membrane in patients with OA [19]. Based on these observations the present study was designed to evaluate the efficacy of Ovomet®, a natural chondroprotector derived from eggshell membrane, for the treatment of elderly patients with arthritis. This observational study was conducted in Hospital Viamed Los Manzanos at Logroño (Spain).

The study was conducted in the period from April to August of 2015. Dr Martínez-Íñiguez Blasco was in charge of patient recruitment, as well as follow-up performed at the beginning and on days 10, 20, 40 and 50 after treatment. Recruitment was done after clinical diagnosis of arthritis. The evaluation method employed was “The Western Ontario and McMaster Universities Arthritis Index” WOMAC [20]. WOMAC is a validated method widely used in the evaluation of hip and knee osteoarthritis, which has been recommended by several international organisms. It is a self-administered questionnaire consisting of 24 items divided into 3 subscales: pain (0-20 scale), stiffness (0-10 scale) and physical function (0-85 scale). Follow-up was performed with face-to-face visits on day 0, 20 and 50 and by telephone on day 10, 30 and 40. During follow-up visits, not only the WOMAC questionnaire was filled in, but joint functionality and stiffness was tested in situ to corroborate the data collected in the questionnaire. A total of 20 patients diagnosed with arthritis participated in this study. They took 300 mg of Ovomet® daily for 50 days. Any participant abandoned the study neither required the use of recue medication or concomitant drugs (analgesic or antiinflammatory) during the study.

This was a prospective study where within-subject comparisons were performed using t student test with Microsoft Excel software.

Twenty patients participated in the study, 55% were males and 45% were females. The average age of the participants was 73.5 ± 1.35 years (mean ± standard error). The mean pain index at the beginning of the study was 13.4 on a 20-point scale (WOMAC), which is classified as “very acute”. This index descended in a significant way (p<0.05) from day 20 until reaching a peak of 36.3% at the end of treatment (Figure 1). The stiffness of the joints was controlled in follow-up visits and in the WOMAC questionnaires performed during the treatment. We observed a gradual and progressive reduction in joint stiffness, which descended of 10.6% at day 10 to 58.3% at day 50 (Figure 2). Moreover, we observed a significant improvement in functionality since day 20 of treatment. This parameter reached a peak of 32.3% of improvement of the functional capacity at the end of the study (Figure 3).

Figure 1: Evolution of the pain intensity over 50 days of treatment with Ovomet® assessed by WOMAC index. (A) WOMAC score for pain intensity. (B) Percentage of pain reduction as compared to basal level (before treatment). *Statistical signiicant differ ences (p<0.05) with respect to their basal values using Student t test for paired samples.

Figure 2: Evolution of the stiffness over 50 days of treatment with Ovomet® assessed by WOMAC index. (A) WOMAC score for stiffness. (B) Percentage of stiffness reduction as compared to basal level (before treatment). *Statistical significant differences (p<0.05) with respect to their basal values using Student t test for paired samples.

Figure 3: Evolution of the functionality over 50 days of treatment with Ovomet® assessed by WOMAC index. (A) WOMAC score for functionality. (B) Percentage of functionality improvement as compared to basal level (before treatment). *Statistical significant differences (p<0.05) with respect to their basal values using Student t test for paired samples.

We also represented the primary response to pain as the percentage of patients who showed a decrease in pain equal or superior to 20%. On day 30 of treatment 50% of patients showed this primary response. This parameter reached 70% at the end of the study (Figure 4). 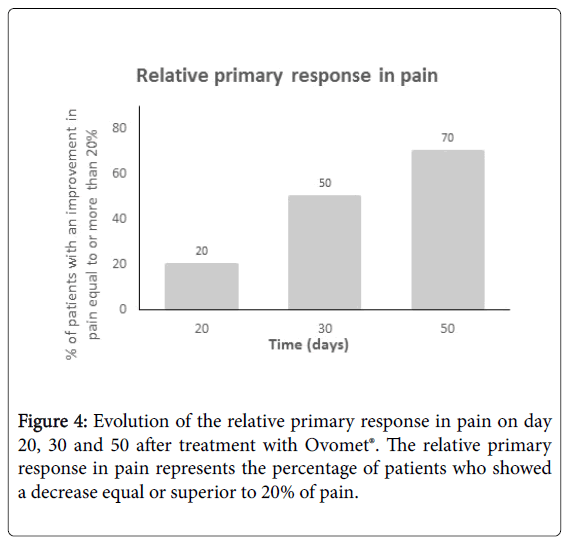 In the last decade, OA has been reclassified as a systemic musculoskeletal disorder associated with metabolic-triggered inflammation. This discovery required of a new therapeutic strategy that included the reduction of inflammation of synovial tissue, so it halts the destruction of the joint at the same time that potentiates the articular repair [21].

Nowadays, different alternative therapies exist for the treatment of arthritis, which are based in nutritional supplements such as chondroitin sulphate, collagen and glucosamine. All these are compounds present in the cartilage and their function is to prevent cartilage degradation and promote its regeneration [22]. A number of in vitro studies, which analyse the biological activity of these compounds, have provided strong evidence of their therapeutic potential. There are different research works which describe the antiinflammatory [6-8] and anti-catabolic action [9,10] of the chondroitin and the glucosamine.

Nevertheless, clinical studies designed to assess the therapeutic efficacy of these compounds have shown results which are not always conclusive. This has led to a lack of consensus in the medical community on the appropriateness of prescribing. Further studies are needed to confirm these results or explore alternative therapies.

Eggshell membrane is a natural product containing these compounds in the form of different glycosaminoglycans (dermatan sulfate, chondroitin sulfate, hyaluronic acid, etc), collagen type I and other compounds with therapeutic interest. Previous studies have showed the anti-inflammatory activity of this product [23,24] and its therapeutic potential [19,25].

The results obtained in our study show that daily administration of 300 mg of Ovomet® (eggshell membrane) is efficacious to ameliorate the symptoms associated to arthritis as previously described. Patients enrolled in this study, all elderly and with a high pain index at the beginning of the study (13.4/20 WOMAC scale), experienced a great improvement in all the parameters included in the WOMAC questionnaire. The WOMAC indexes for pain, stiffness and loss of functionality were progressively reduced since the beginning of treatment. This reduction reached a statistically significant peak since day 20 after treatment as compared with basal values. The results obtained are more relevant than those observed in previous studies where glucosamine and chondroitin or the sum of both were compared [4,26].

In addition, Ovomet® lacks of the side effects associated to longterm use of other treatments prescribed for arthritis such as NSAID. For this reason, it can be administered continuously. This therapy involves a progress over pain management and the disability generated by arthritis, leading to an improvement of the quality of life of patients.