Copyright: © 2014 Saito A, et al. This is an open-access article distributed under the terms of the Creative Commons Attribution License, which permits unrestricted use, distribution, and reproduction in any medium, provided the original author and source are credited.

Background: Intentional replantation of periodontally involved teeth has been reported to result in unfavorable healing like root resorption and ankylosis. However, many recent clinical reports using enamel matrix derivative (EMD) showed a good outcome based on clinical and radiographic examination. However, histological findings are lacking. The purpose of this study was to evaluate healing after intentional replantation with EMD in a periodontally involved teeth model.

Methods: A total of 20 incisors from seven beagle dogs were used. The periodontal ligament and cementum 5 mm from the coronal part of the roots were removed, whereas those in the apical part were preserved. Ten teeth of the experimental group were transplanted following application of EMD to the root surface. Ten teeth from the control group were transplanted without application. Eight weeks after transplantation, periodontal healing was analyzed.

Conclusion: The combination use of EMD in intentional replantation resulted in new cementum formation on the root planed surface and inhibited root resorption and ankylosis. However, root resorption occurred at the coronal part in areas where the surface was root planed.

Intentional replantation is performed in cases requiring apicoectomy, root sealing of teeth that are difficult to cure by root canal therapy [1-5], filling at the perforation site [6] and the adhesion of root fracture [7-11] outside the oral cavity. Teeth which are out of occlusion due to missing antagonists, especially third molars, are implanted to another place in the jaw intentionally to improve oral function by intentional tooth implantation [12].

Intentional replantation was reported mostly by studies which used clinical and radiographic evaluation to investigate the success rate and a high survival rate of 50% [13] to 95% [14] was reported. The most common causes of failure are root resorption and ankylosis caused by damage/lacking of periodontal ligament [15-18]. As patients requiring intentional tooth replantation are mostly elderly people as compared to those with avulsed teeth, the teeth would often be periodontally involved.

Some clinical studies reported a good outcome when using a combination of intentional replantation and Enamel Matrix Derivative (EMD) for severe periodontally involved teeth [14,19]. It is suggested that the remaining periodontal ligament cells have the potential to populate on the root planed surface and enhance connective attachment using EMD [20].

However, histometric evaluations in clinical and animal models are lacking and it is not known whether periodontal ligament cells populating the root-planed surface after application of EMD would induce formation of connective tissue attachment.The purpose of this study was to evaluate healing after intentional replantation with EMD in a periodontally involved tooth model.

Preparation and transplantation of teeth

Twenty maxillary incisors of seven beagle dogs (male, 1 year old; mean weight, 11 kg) were used. This study protocol (No. 08-0257) followed the guidelines for care and use of laboratory animals of the Graduate School of Medicine, Hokkaido University. The dogs received plaque control, consisting of twice-weekly brushing and application of 0.5% chlorhexidine gluconate solution, in order to establish healthy gingival conditions prior to surgical procedures.

The surgical procedures were performed under anesthesia by an intramuscular injection of medetomidine hydrochloride (5 μg/kg, Domitor®; Meiji Seika, Tokyo, Japan) and ketamine hydrochloride (2.9 mg/kg, Ketaral 50®; Sankyo, Tokyo, Japan) and local infiltration (xylocaine 2% with 1:80,000 epinephrine, Xylocaine®; DENTSPLY SANKIN, Tokyo, Japan). We used teeth that were not adjacent in this study in order to fix to adjacent teeth after implantation. The incisors were carefully extracted with forceps and then immersed in sterile phosphate buffer saline (PBS). Approximately half of the crown was excised and the length of the root was adjusted to 8 mm using a bur and the contents of the root canal were removed with Kerr type file and Peeso reamer. The root canal was filled with gutta-percha and ZOE-free sealer (Canals®N; Showa Yakuhin, Tokyo, Japan). The root-end cavities were prepared and applied aqueous solution of 10% citric acid and 3% ferric chloride (activator Green®, Sun Medical Co. Ltd., Shiga, Japan) with a Benda® Brush (Centrix, Shelton, CT, USA) for five seconds and then filled with 4-META/MMA-TBB resin (Super-bond® C&B, Sun Medical Co. Ltd., Shiga, Japan). Periodontal ligament and cementum were removed 5 mm from the coronal part of the roots and the root surfaces were planned. The periodontal ligament in the apical part of the root was retained (Figure 1a). At this point, the teeth were randomly assigned to one of two treatment groups based on a random computer-generated list. 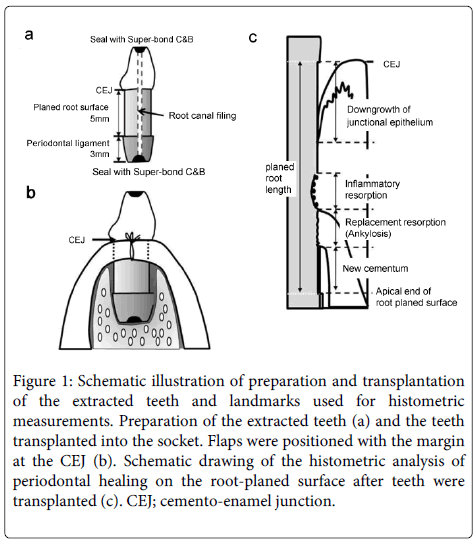 Figure 1: Schematic illustration of preparation and transplantation of the extracted teeth and landmarks used for histometric measurements. Preparation of the extracted teeth (a) and the teeth transplanted into the socket. Flaps were positioned with the margin at the CEJ (b). Schematic drawing of the histometric analysis of periodontal healing on the root-planed surface after teeth were transplanted (c). CEJ; cemento-enamel junction.

In 10 teeth in the EMD group, the root-planed surface was conditioned with 24% EDTA (pH 7.4) for 2 min and rinsed with PBS. Then, 0.5 ml of EMD was applied over the entire root-planed surface. Then, the teeth were placed into the sockets and the gingival margin was positioned with the margin at the cemento-enamel junction (CEJ) of the replanted teeth (Figure 1b). The teeth were adjusted to occlude and fixed to adjacent teeth with Super-bond C&B.

Ten teeth in the control group were similarly prepared including root conditioning and replanted without application of EMD.

The dogs were sacrificed 8 weeks after replantation. Block sections were dissected, fixed in 10% buffered formalin, decalcified in Plank-Rychlo solution, trimmed, dehydrated, and embedded in paraffin. Serial sections of 3-4 μm thickness were prepared in the bucco-lingual plane. Sections were stained with hematoxylin and eosin.

Each section was carefully measured once by a single examiner, who was blind to the status of the block. Three sections (500 mm apart) representing the central part of the root was selected for measurements. The following measurements were performed on the root-planed surface of the teeth by light microscopy (Figure 1c).

Planed root length: distance between CEJ and apical extent of the root-planed surface; 2) Down growth of junctional epithelium: distance from CEJ to apical margin of the junctional epithelium; 3) New cementum: longitudinal length of regenerated cementum or cementum-like deposit on the root with or without resorption lacunae; 4) Inflammatory resorption: resorption lacunae on the root surface with inflammatory cells in the area; and 5) Replacement resorption (Ankylosis): the periodontal ligament is replaced by bone. The alveolar bone is in contact with cementum or dentin. Values were expressed in percentages of planed root length.

The mean and standard deviation for each measurement were calculated for each tooth from selected sections. Differences between two groups were statistically analyzed using the Mann-Whitney U test.

Clinical healing after transplantation of teeth was uneventful with minimum indications of inflammation throughout the experimental period. Several studies have reported that EMD stimulated proliferation of periodontal ligament in vitro [20,24,25]. Recently, a clinical study reported the use of severe periodontally involved teeth for intentional replantation and showed the effect of EMD on periodontal repair [26,27]. However, most of these findings were based on radiographic and clinical examination and histological analysis had not been performed. In this study, we used periodontally involved teeth that had 5 mm of the root surface planed from the coronal part of the roots, to examine the effect and behavior of EMD on intentional replantation of periodontally involved teeth with partially remaining healthy periodontal ligament. New cementum formation was observed about 1.5 mm from the coronal part in the EMD group, significantly greater than that in the control group. This result was similar to that of a study that examined the effect of EMD in a periodontitis model with vertical bone defect [28-31]. These suggested that EMD could promote migration, proliferation and differentiation of undifferentiated periodontal ligament cells onto the root planed surface adjacent to remaining healthy periodontal ligament and could enhance new cementum formation.

Ankylosis in the EMD group was significantly less than that in the control group. This result was similar to that of Iqbal et al., who used a replantation model with damaged periodontal ligament or no periodontal ligament [19,34,35]. However, Arau´jo et al. reported that ankylosis in EMD application group was larger than that of the no EMD application group [33]. They submerged the replantation tooth and continued to submerge it until the end of the observation period. In general, ankylosis occurred over a wide area without occlusion in an appropriate time after replantation [39,40]. Jianq et al. reported that EMD enhanced proliferation of osteoblasts in vitro and reduced characteristics of osteoblasts such as ALP activity, type I collagen, ALP, runt-related protein 2, osteocalcin, bone sialoprotein and osteopontin, and reversed the ability of cell attachment [41]. Therefore, EMD was thought to inhibit ankylosis in a clinical model that brings teeth into occlusion after replantation.

This study suggested that intentional replantation with EMD application induced cementum formation by periodontal ligament cells that had migrated, proliferated and differentiated from the adjacent remaining periodontal ligament to the root-planed surface by EMD. Periodontal ligament cells inhibited ankylosis and root resorption; however, root resorption occurred at the coronal portion in areas where the surfaces were extensively root planed. If the attachment between root planed surface and connective tissue attachment could be quantified, this technique may have the potential to become a foreseeable therapy. Furthermore, creating an environment where migration and proliferation of the periodontal ligament by EMDOGAIN is not inhibited might help to expand indications.

The authors declare that they have no conflict of interests. This study was supported by Grants-in-Aid for Encouragement of Scientific Research (22592307 and 25463211) from the Ministry of Education, Science, Sports and Culture of Japan.