Lung cancer is the most common cancer type and the leading cause of cancer deaths in world-wide [1].

In recent years, more than 40 susceptible genetic regions for lung cancer have been identified by GWAS analysis, including 5p15, 6p21 and 15q25 in Caucasian and Asian populations. The 5p15 contains two independent association signals, which map to TERT and CLPTM1L.

Several variants in the TERT-CLPTM1L have been identified by GWAS to be associated with melanoma [1], skin cancer [2], bladder cancer [3,4], pancreatic cancer [5] and breast cancer [6,7].

The telomerase gene TERT is a reverse transcriptase that controls telomere length and is critical for telomere replication and stabilization [8].

Several studies showed that the rs2736100, rs402710 and rs401681 polymorphism of TERT-CLPTM1L was strongly associated with several cancer susceptibility [9], including lung cancer [10] and suggested that TERT-CLPTM1L polymorphisms may play an important role in cancer pathogenesis.

However, a single study might have been underpowered to detect the overall effects. A quantitative synthesis of the accumulated data from different studies is helpful to provide evidence on the association of TERT-CLPTM1L polymorphism with lung cancer risk.

Thus, in this study, we conducted a pooled analysis of data from 19 studies of lung cancer on a total of 32319 cases and 50529controls of both from Caucasian and Asian ancestry.

Finally, 53 references of the retrieved articles were scanned. Reviews, comments, and letters were also checked for additional studies.

Articles that meet the following criteria were included:

With 95% CIs was used to assess the strength of association between the TERT-CLPTM1Lpolymorphism and Lung cancer risk Heterogeneity between studies was evaluated by the Q test.

A fixed effect model was used to pool the data when the p value of the Q test was <0.05; otherwise, random effects model was selected.

Characteristics of all included studies

As shown in Figure 1, 53 eligible studies were selected after a comprehensive literature research up to10 January 2015. 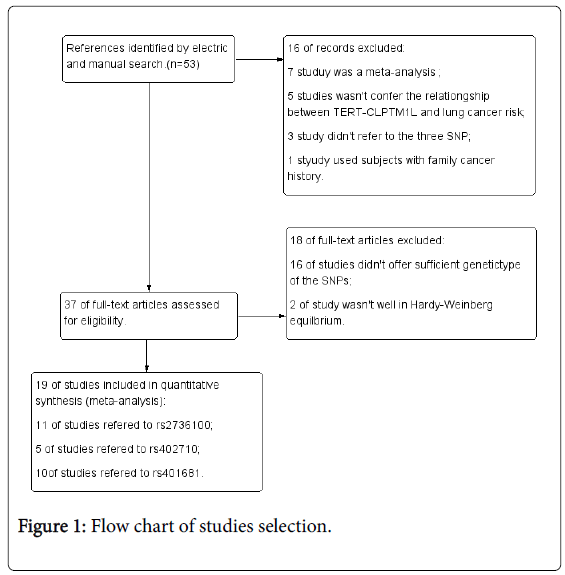 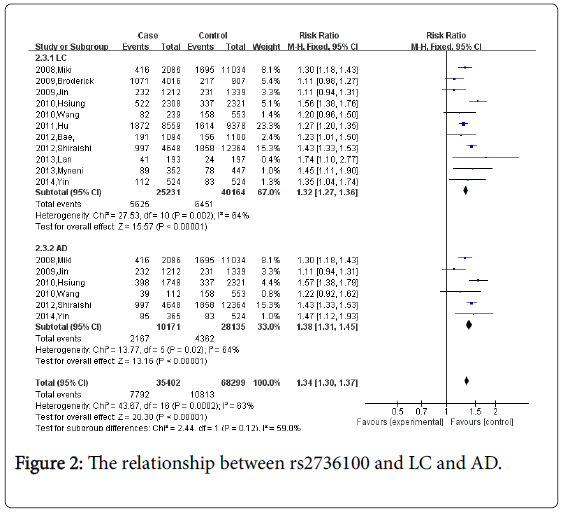 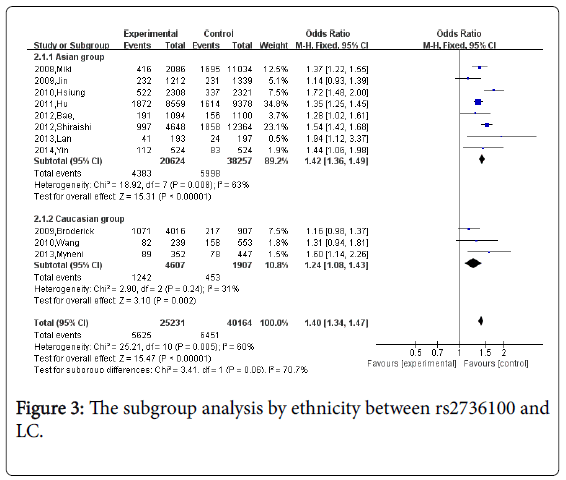 Figure 3: The subgroup analysis by ethnicity between rs2736100 and LC. 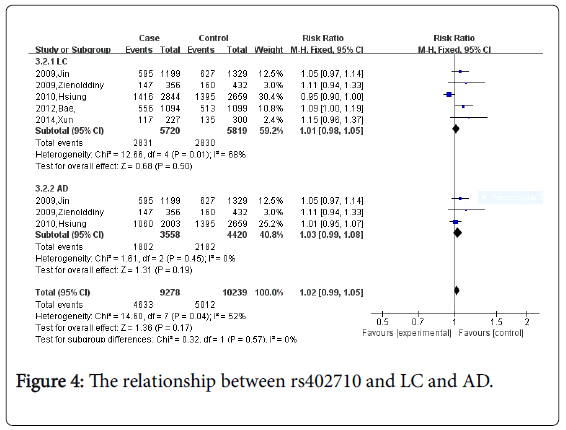 Figure 5 When stratified by pathology and ethnicity, there were also no associations observed (P=0.54). 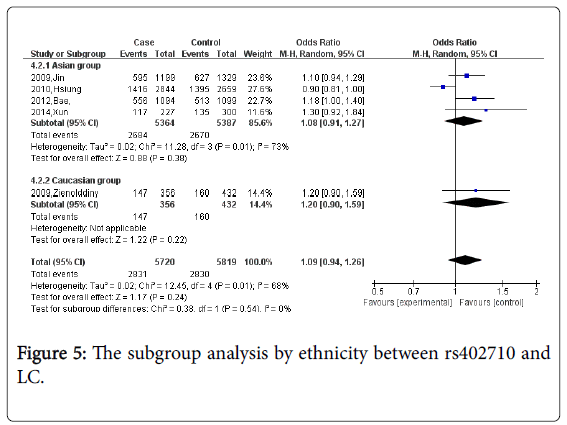 Figure 5: The subgroup analysis by ethnicity between rs402710 and LC. 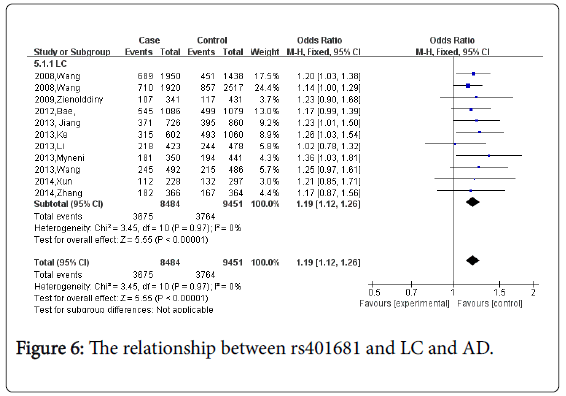 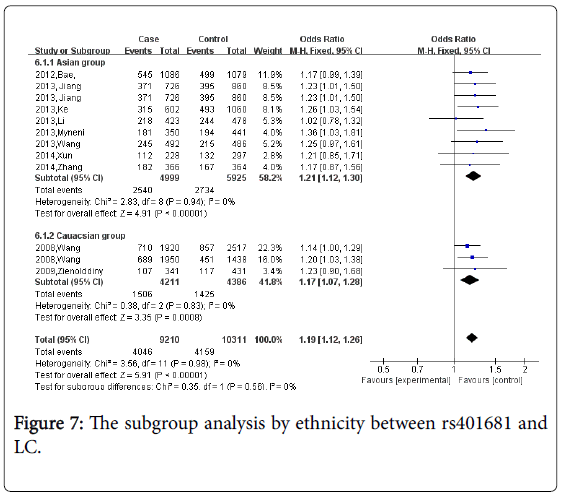 Figure 7: The subgroup analysis by ethnicity between rs401681 and LC.

In addition, we conducted a sensitivity analysis. For rs2736100 site, after removing two studies (2009Hsiung [11]), the results were stable and homogeneous (Pheterogrmeity=0.11, I2=38%). For rs402710, there was no significant heterogeneity in lung adenocarcinoma in subgroup analysis (Pheterogrmeity=0.45, I2=0%). Finally elimination of any individual study made no qualitative difference on pooled OR values, so the results of this meta-analysis were relatively stable and reliable.

Begg’s funnel plot and Egger’s test were performed to assess the publication bias of the literatures. The shape of the funnel plots showed that no significant evidence of obvious asymmetry in the overall meta-analysis (for rs2736100, P=0.251; for rs402710, P=0.703; for rs401681, P=0.967,, separately). Also, the results showed no obvious evidence of publication bias in the subgroup analysis.

The rs2736100A/C SNP is located in intron 1 of TERT, which has been reported to be associated with lung cancer risk in both Caucasians and Asians. McKay et al. did not report heterogeneity with respect to histology, gender or smoking status [12]. However recent reports indicate that the association between rs2736100 and lung cancer risk is more evident for adenocarcinoma, females, nondrinkers, nonsmokers and cooking oil fume exposure [10,13-16]. Myneni et al. reported that TERT was more prominently associated with lung cancer in participants who were older than 60 years, exposed to low indoor air pollution and adenocarcinoma and squamous cell carcinoma [17]. This suggests that TERT may play an important role in the pathogenesis of AD and that telomerase activity may interact with smoking to infiuence the development of lung cancer. It is possible that rs2736100 is in high linkage disequilibrium (LD) with other potential functional or causal SNPs, contributing to the development of lung cancer. To date, the functional significance of the SNP rs2736100 remained unclear. In our meta-analysis, rs2736100A/C individuals from Asian and Caucasian subgroups displayed increased lung cancer risk, especially for AD.

CLPTM1L contains two obvious SNPs (rs402710 and rs401681). The SNP rs402710 A/C is located in intron 4 of the CLPTM1L gene, was found to be associated with higher DNA adduct formation in tumor adjacent lung tissue and may enhance the formation and persistence of DNA adducts McKay et al. found that rs402710 showed relatively little LD with rs2736100 (r2=0.026) [12]. In contrast, rs401681 was in strong LD with rs402710 [17]. So far, only Xun et al, they found rs402710 may decreased risk of lung cancer [18]. Zienolddiny et al. reported that the genotype of rs402710 did not show statistical difference in terms of gender [19]. The SNP rs401681 is localized in intron 13 of CLPTM1L. The relationship between rs401681 and lung cancer is controversial. For instance, Wang H. et al. reported that rs401681 was associated with non-small cell lung cancer but not with small cell lung cancer in the Chinese mainland population [20]. Two Chinese studuies found that the SNP affect the susceptibility of lung cancer, especially adenocarcinoma in women nonsmokers [21,22]. While some study acknowleged the susceptibility of smoking and Alcohol Drinking people [18,23]. Myneni et al. reported rs401681 has stronger association in participants exposed to low indoor air pollution and squamous cell carcinoma [17]. However, Bae et al. found that the two SNPs significantly affected the risk of lung cancer for only adenocarcinoma [24]. In our meta-analysisrs402710 was not associated with lung cancer risk, however, rs401681 was associated with lung cancer risk and when stratified by ethnicity, significant associations was observed both in Asians group and Caucasians group.

There are some limitations that need to be addressed. Firstly, although no publication bias was shown in the funnel plots and Egger’s tests, selection bias may still exist as non-English literatures were excluded. Secondly, due to insufficient genotype frequencies, we were unable to calculate the subgroup analyses of gender, smoking state, age and histology. Thirdly, there was a serious imbalance in ethnic disparity as 11 studies referred to Asian,especially to Chinese. Fourthly, ORs without adjustment were pooled together; although there was no substantial change between the two kinds of ORs in this synthesis, it may be a considerable source of heterogeneity.

In summary, our data suggested that TETT-CLPTM1L is a candidate susceptibility gene for lung cancer risk in Caucasian and Asian populations. Increased cancer risk was found in rs2736100CCand rs401681CC and homozygous variant genetic model. However as rs2736100and rs401681 are located in the introns of the TERT and CLPTM1L genes, the association between these SNPs and lung cancer may be due to LD with other functional variants. Further functional studies and well-designed studies are necessary to clarify the mechanisms by which TETT-CLPTM1L influences susceptibility to lung cancer.

Copyright: © 2015 Cheng S, et al. This is an open-access article distributed under the terms of the Creative Commons Attribution License, which permits unrestricted use, distribution, and reproduction in any medium, provided the original author and source are credited.