Copyright: © 2017 Zarei A, et al. This is an open-access article distributed under the terms of the Creative Commons Attribution License, which permits unrestricted use, distribution, and reproduction in any medium, provided the original author and source are credited.

The techniques of wastewater treatment have been considered, recently. The performance of usage of nano ferric oxide and aluminum oxide as coagulant is evaluated in this work, experimentally. The experiments were conducted to measure the important parameters in quality of treatment by addition of four different amounts of nano two metal oxides 1, 1.5, 2 and 2.5 gr. The value of pH, color, color/color0, zeta potential, slug volume index, total dissolved solids conductivity, turbidity, ammonia, sulfide, heavy metals, phenol, oil and grease is investigated. The results show the better performance of nano ferric oxide in coagulation and flocculation by lower amount of zeta potential, ammonia, phenol and sulfide and oil, grease elimination than aluminum oxide. However the value of slug volume index in treated wastewater by nano ferric oxide is higher than that is obtained with nano aluminum oxide

Totally, the published researches about the pretreatment of exit wastewater from desalination units are rare. Nowadays, lake of potable water, development of industries and population growth, extend desalination units [1-3]. Although desalination units have been grown up, but exit brine stream is usually drained into the sea ecosystem. Moreover, annually a large quantity of concentrated brine is discharged into the sea [4,5]. By treatment of this saline wastewater, it is possible to eliminate the hazardous effects of salinity on sea ecosystem. Additionally two valuable matters, salt and sweet water can be produced. Total hardness and turbidity of wastewater must be reduced during pretreatment process of wastewater to produce Sodium Chloride salt [3,6]. Coagulants are the matters used to decrease total hardness of wastewater. The pretreatment process includes 3 steps: coagulation, flocculation and sedimentation. Improving the efficiency of pretreatment process depends on water specifications and also the operating parameters [7-9]. The optimum mixing rate of first pretreatment reactor, type of coagulant, ratio of sodium carbonate to coagulant and sodium hydroxide to coagulant are some of the important factors in operating conditions. Polyelectrolytes or mixture of coagulants can be used to improve the efficiency of total hardness removal [10,11]. In this research various binary mixtures of three mineral coagulants were investigated quantitatively and qualitatively. The optimum amounts of Sodium Carbonate to coagulant ratio and Sodium Hydroxide to coagulant ratio were studied for each coagulant individually. This shows that the best ratio for Sodium Carbonate to coagulant is three and for Sodium Hydroxide to coagulant are four [12].

Experiments are managed for the brine wastewater of Tehran petroleum refinery which exits from desalination unit.

The purposes of this study is finding the optimum speed of mixer in the coagulation step when mixtures of nano coagulants are used and also reaching the best type of coagulant which results in the higher efficiency in the softening process. A sample of wastewater is fed to the first pretreatment reactor; the proper amounts of Sodium Carbonate and Sodium Hydroxide, and also one type of nano coagulant are added to the first pretreatment reactor in each run. The mixer speed in the first pretreatment reactor is set for 160 rpm in 120 second as time interval. The constant condition for second reactor is 45 rpm in 10 minutes as time interval. The amount of Sodium Hydroxide and Sodium Carbonate is 600 and 450 ml, respectively. Coagulation step is occurred in the first pretreatment reactor, in this step configuration of coagulants are broken and permanent and temporary hardness can be attached to coagulants and make tiny scales. The experiments are handled by three values of speed of mixer for this step and the speed is 120 rpm. After 120 seconds the valve 2 is opened and wastewater with the suspended sediments is drained to the second pretreatment reactor. The speed of mixer in this reactor adjusted on 45 rpm for helping the flocculation of the tiny scales. After 10 minutes the mixer turns off and the suspension drained to a baker and let be rest for more than 1 hr. In this sedimentation step, larger floc precipitated and separated from the clarified soft water. If the size of floc is large enough, the last sedimentation step may take less than 45 minutes, approximately. 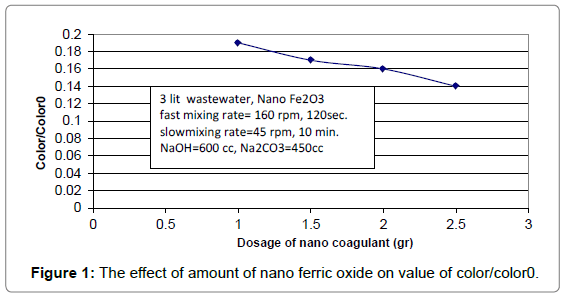 Figure 1: The effect of amount of nano ferric oxide on value of color/color0. 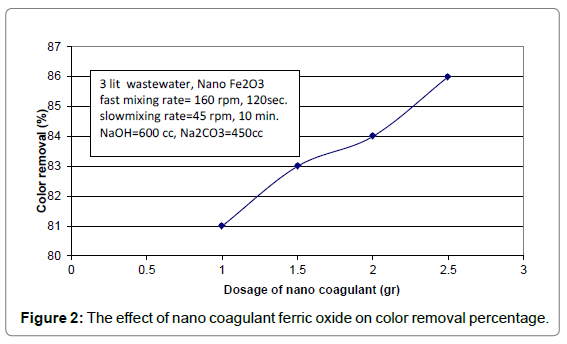 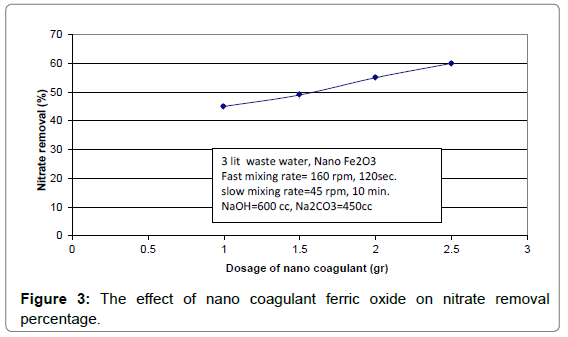 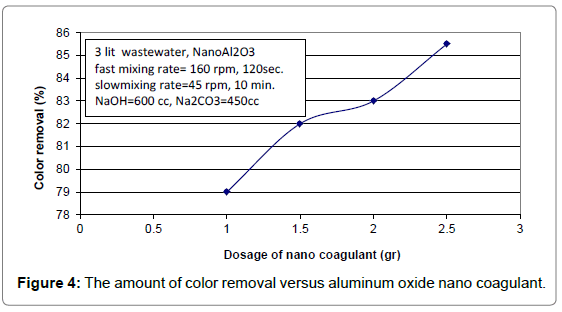 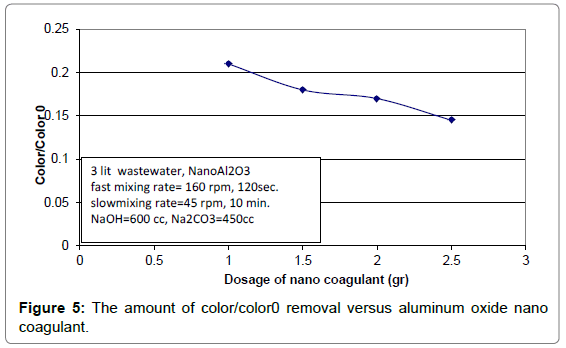 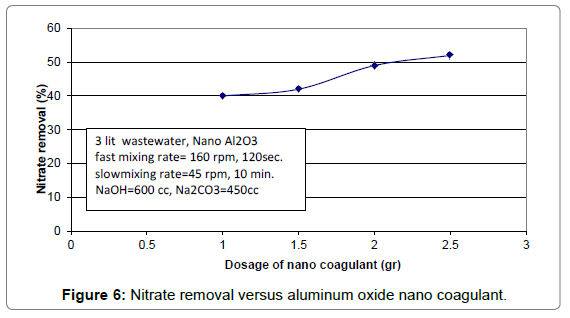 The performance of two nano coagulant in pretreatment of wastewater from refinery is presented in this experimental work. Refinery wastewater includes oil, grease, heavy metals, phenol, ammonia and nitrate as contaminants. The dosage of nano coagulant changes in values of 1, 1.5, 2 and 2.5 g. Both of nano ferric oxide and aluminum oxide show the positive effect in elimination of dangerous components. The increase in the amount of each nano coagulant increases the effect of them in contaminant removal. Usage of nano ferric oxide shows the higher performance of nano ferric oxide about 10%. 0.5%, 0.6% and 0.4% in ratio of color/color 0 than aluminum oxide. The results obtained from ferric oxide usage (1, 1.5, 2 and 2.5 g) show the higher value about 20%, 18%, 20% and 9.5%, respectively. The higher values of nitrate elimination percentage are obtained in usage of ferric oxide about 12%, 17%, 12% and 15%, respectively than those are obtained from aluminum oxide.