Copyright: © 2013 Hendrik HD, et al. This is an open-access article distributed under the terms of the Creative Commons Attribution License, which permits unrestricted use, distribution, and reproduction in any medium, provided the original author and source are credited.

Airway surface liquid forms part of the innate defence mechanism of the respiratory system, including the nasal and paranasal sinuses. Successful mucociliary clearance, which lies at the centre of this defence mechanism, involves the synchronized function of two structures, namely, the periciliary liquid layer and the mucus layer. The two structures have collectively been termed the ‘two phase airway surface liquid’ system. This system is kept hydrated through regulation of sodium and chloride transport. A well hydrated airway surface liquid that allows the periciliary liquid layer to extend over the height of the outstretched cilia keeping mucus away from the epithelia is considered to be essential for effective mucus clearance and sinonasal health. This mechanism assists in trapping and eliminating foreign particles and, together with antimicrobial peptides, maintains a sterile environment in the nasal and paranasal sinuses, which are continually exposed to microorganisms in the external environment. In diseases such as rhinosinusitis, the mucociliary clearance capacity is diminished; the first line of defence is disrupted allowing for bacterial invasion and infection. This manuscript explores the prospect of an alternative approach for the prophylaxis and primary management of rhinosinusitis based on the maintenance of a well hydrated airway surface liquid.

Histologically, the nasal and paranasal sinuses are lined with pseudostratified ciliated columnar epithelium that is approximately 0.3-5 mm in thickness [1,2]. This sinonasal epithelium is covered by a thin layer airway surface liquid (ASL) and contains specialized cilia immersed in a low viscosity periciliary liquid layer (PCL) [3]. Mucosal glands and specialized goblet cells are collectively responsible for mucous production and secretion [1,2] (Figure 1). Mucus is an important component of ASL and is positioned over the cilia and PCL serving as an efficient trap for inhaled particles which are transported to the nasopharynx by the synchronised, one-directional movement of the cilia [2]. Adequate mucociliary clearance (MCC) is also dependent on the hydration state of the ASL as well as on ciliary beat frequency [4]. In chronic rhinosinusitis (CR), there is disruption in the Cltransport which leads to dehydration of ASL and mucus stasis [5]. This leads to the formation of excess viscous mucus that adheres to the airway surface and creates a setting that is ideal for recurrent bacterial overgrowth that has the potential to elicit inflammation and cause damage to the surface epithelium [6,7]. This manuscript investigates an alternative therapeutic approach to RS, which would reduce the associated inflammation by improving the MCC thereby allowing ASL to perform its protective functions optimally. 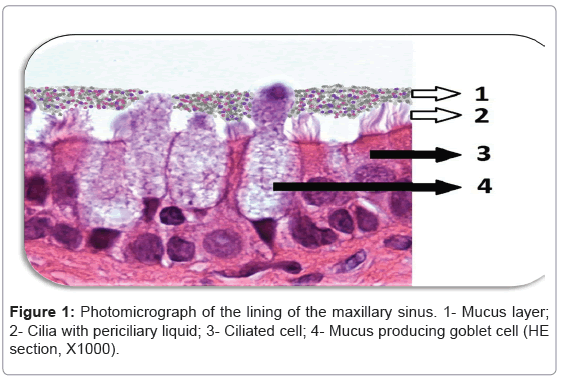 Genetic disorders such as cystic fibrosis validate the crucial role that the ASL plays in the first line of defence of the airways [5]. Mutation in the gene encoding cystic fibrosis transmembrane conductance regulator (CFTR) gene is seen in individuals that suffer from this disease [8]. CFTR is an apical membrane anion channel that facilitates secretion of Cl- [9]. A non-functional CFTR will thus cause impaired Cl- secretion, unrestricted Na+ absorption which will dehydrate the ASL [9]. Surface mucus thus becomes more adherent and difficult to clear, rendering cystic fibrosis patients to be considerably more susceptible to recurrent infections [5]. Similarly, the sinonasal surface epithelium is maintained optimally hydrated through CFTR anion channel which regulates the amount of Cl- that is secreted, maintaining an adequate salt content and therefore water which impacts directly on the viscosity of the ASL [6,10]. In order for mucus to be cleared optimally, the PCL needs to reach the height of the outspread cilia, this height being approximately 7-10 μm [4]. In this way the PCL keeps the mucus away from the epithelia and allows the cilia to function efficiently (Figure 2) [4]. The composition of the PCL was initially thought to be watery but it is now recognized to be a ‘grafted polyanionic gel’ [10]. This consistency allows not only for efficient beating of the cilia but also avoids the adhesion of the mucus layer onto the surface of the cell [10]. The mucous layer covering the cilia traps the particles inspired and contains mucins, which are ‘highly glycosylated polymers’ arranged in a mesh-like network that contain pores the sizes of which can trap particles of varied dimensions [10]. The ASL, in this way, creates the sterile environment needed for healthy sinonasal function [11]. Figure 2: Diagram illustrating the components of the ASL. 1- Mucus layer; 2: PCL; 3: Ciliated columnar epithelium with cilia extending into the PCL.

Dehydration of the ASL renders the cilia inefficient in removing bacteria and creates an ideal environment for the attachment and aggregation of bacteria into a biofilm (Figure 3) [1]. Defensins are secreted into the ASL by epithelial cells and have antimicrobial activity which is compromised by high salt concentrations found in dehydrated ASL [12,13]. Figure 3: Diagram illustrating dehydration of ASL with folding of cilia on the epithelia. 1: Viscous mucus that cannot be cleared by collapsed cilia; red particles represent bacterial aggregation in the form of a biofilm. 2: Collapse of PCL with a decrease in height and folding of cilia. 3: columnar epithelium with inefficient cilia.

According to the European Position Paper on Rhinosinusitis and Nasal Polyps, RS is an “inflammatory process involving the mucosa of the nose and one or more paranasal sinuses” [14]. The former classification for this disease was “sinusitis” [15]. Due to the fact that the disease usually affects both the nasal and the paranasal sinuses and due to the close anatomical proximity of the two structures as well as the continual mucosa, the encompassing term “rhinosinusitis” is generally embraced [15]. Clinically, RS can be divided into two main forms; acute rhinosinusitis (ARS) and chronic rhinosinusisits (CRS) with or without nasal polyps (Table 1) [15-17]. Occasionally, there may be individuals who experience recurrent forms of ARS without chronic symptoms between the acute episodes [15,16]. Viruses such as rhinoviruses, adenoviruses, picorna viruses, which affect MCC apparatus of the sinonasal mucosa [15], usually cause acute rhinosinusitis. Obstruction of MCC leads to bacterial colonization and aggregation as a secondary infection [15]. Chronic rhinosinusitis presents with repeated infectious episodes, which is characteristic of bacterial “biofilm-related diseases” [18]. ARS is characterized by a rise in pro-inflammatory cytokines and neutrophilia and may mimic a bacterial infection [15]. It is thus frequently treated with antimicrobial chemotherapy as it is mistaken for a bacterial infection [16]. Although it is self-limiting the quality of life of the affected individuals is significantly impacted [16].

CRS has numerous aetiologies including viruses, bacteria, fungi, anatomical defects, polyposis, and aspirin sensitivity [15]. Predisposing factors include cystic fibrosis and acquired immunodeficiency [15]. Clinically, the symptoms of CRS are similar to those in ARS (Table 1) [19]. In recent years, persistent and recurrent CRS has been linked to bacterial biofilms capable of adhering to the nasal and paranasal mucosa [10]. These biofilms represent well-structured bacterial colonies protected by an outer polyssacharide matrix which shows a high resistance to host immune mechanisms [19,20]. 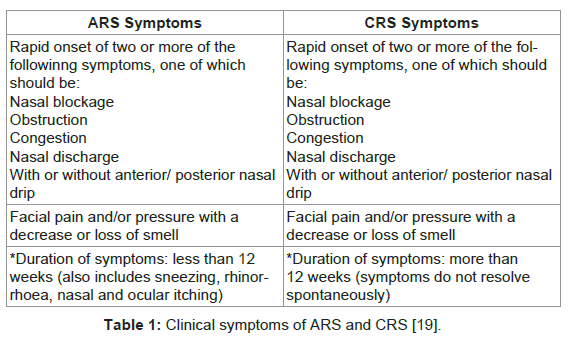 The current global trend in the treatment of ARS and CRS is antimicrobial chemotherapy [18]. A global rise in antimicrobial resistance to penicillin and macrolides and the emergence of multidrug resistant Streptoccocus pneumonia infections warrants a therapeutic shift towards reestablishment of the intrinsic first line of defence of the nasal and paranasal sinuses, the ASL [18,21]. The restitution of ASL and accordingly the MCC apparatus will counteract the attachment and aggregation of bacteria into a resistant biofilm [22]. Ultimately, reduction of sinonasal inflammation and optimization of the innate defence mechanism would improve the quality of life of those affected by this disease and would ensure that no new strands of multidrug resistant Gram-negative bacteria are generated by arbitrary use of antimicrobial chemotherapy [22,23].

The most appropriate therapeutic approach for the prophylaxis and primary management of ARS and CRS appears to be the maintenance of efficient mucus clearance. This can be achieved through the rehydration of the ASL allowing it to reach an optimal height in order for cilia to perform its functions effectively and in order to prevent the aggregation of the bacterial biofilm to the sinonasal mucosa [19].

A recent study done by Zhang et al. has confirmed that naturally occurring flavanoids, in particular quercetin, have the capacity to activate CFTR Cl- channels in the apical portion of airway epithelia [24]. Flavanoids are diphenylpropane derivatives that are omnipresent in our food and have proven to be safe for oral and intravenous administration [16,25]. Products such as Quercetin have wellestablished anti-inflammatory activity and have been proven to be effective activators of CFTR thereby influencing the hydration state of ASL through ion absorption and secretion [24]. It has further been shown that, flavonoids are vigorous enhancers of ciliary beat frequency [24]. These studies grant the rational for administering products containing flavanoids to patients suffering from CRS as the initial management [5,24]. In cases of ARS, the authors recommend the administration of flavanoids as prophylaxis, in order to prevent the development of complications or advancements of the disease to CRS.

It has been demonstrated that administration of macrolide antibiotics in chronic respiratory diseases such as cystic fibrosis provides significant amelioration of symptoms [4]. Macrolides have the capacity to reduce bacterial virulence and inhibit the formation of bacterial biofilm by altering its structure and function [26]. In addition to their antimicrobial activity, macrolides are able to moderate the inflammatory response associated with CRS by inhibiting the production of interleukin-8 which is a powerful neutrophil chemotactant cytokine [26,27]. In chronic respiratory conditions, a chronic neutrophilia is also present which increases mucosal human neutrophil elastase levels and disturbs the normal functioning of epithelial sodium channel leading to greater Na+ absorption contributing to the dehydration of the ASL [4]. Macrolides seem to limit disturbances to airway epithelial sodium channel function caused by the proteolytic activity of neutrophil elastase, thereby enhancing MCC clearance [4].

A newly engineered macrolide GS-459755, with diminished antimicrobial activity could be a suitable therapeutic alternative in conjunction with flavonoids for the treatment of RS [4].

The authors do acknowledge that, indeed, particular cases of bacterial RS warrant antimicrobial chemotherapy. This therapy should be set aside for cases of RS that last for more than 7 days and present with purulent nasal secretions and unilateral pain and pressure in the facial region [28]. The authors recommend that the primary management for all types of non-bacterial RS should be conservative, through the reduction in the use of antimicrobial chemotherapy in cases of ARS of viral origins, self-limiting bacterial infections and CRS. Such an approach would favour the rehydration of the ASL and would produce a medium in which cilia and mucus work in harmony for optimum mucus clearance.

Recent research into the formation and modification of ASL, MCC and establishment of microbial biofilms has improved the understanding of RS. A novel approach to the prevention and initial management of RS is presented which diverts the principles away from antimicrobial chemotherapy to re-establishment of ASL homeostasis.