Lung cancer combined with severe airway stenosis is a medical emergency, and unlike mild-to-moderate stenosis, is difficult to treat with percutaneous or bronchoscopic biopsy and stenting. We report the successful treatment of a case of lung cancer with severe airway stenosis that was treated sequentially with initial airway angiography, forceps biopsy using interventional radiology, stent placement, regional perfusion chemotherapy through a bronchial artery and radiotherapy. A 66 year-old male patient presented with a 1-month history of a productive cough, with dyspnea in the preceding 6 days. A chest spiral CT scan showed obstruction of the right hilum and complete right lung atelectasis with plugging of the right main bronchus. The patient was initially managed with oxygen before undergoing airway angiography and biopsy. A Y-shaped stent was placed through the affected bronchus, which alleviated the atelectasis. The patient further responded to locally-delivered chemotherapy and regional radiotherapy. After two years of follow-up, the patient was still alive, and no longer breathing difficultied, chest CT review showed that the tumor was no significant progress. Sequential therapy with a range of interventions can lead to an improved quality of life and a prolonged survival duration in a patient with an acute presentation of severe airway stenosis.

Dyspnea due to severe airway stenosis is a serious, acute respiratory condition that can cause death due to asphyxiation. In patients with moderate airway stenosis, fiberoptic bronchoscopy and biopsy can be used to determine the underlying disease pathology and direct further treatment [1]. However, bronchoscopy and biopsy are difficult in patients with severe airway stenosis, especially in those with a highly vascular stenosed segment. A severely stenosed airway may be too narrow to allow the insertion of a fiberoptic bronchoscope; moreover, there is a risk of hemorrhage during bronchoscopy and biopsy. Such patients have difficulty in breathing, which may be fatal. The timely placement of airway stents can release airway strictures and relieve dyspnea [2,3]. Follow-up combined with radiotherapy and chemotherapeutic options can reduce the size of the tumor further, depending on the pathological results.

A 66 year-old male patient presented with a productive cough that had been present for 1 month. Symptomatic treatment had yielded poor results. Six days before admission he became dyspneic, and a chest spiral CT scan at his local hospital showed an obstruction of the hilum of the right lung with right lung atelectasis. After he was transferred to our center on February 11, 2012, Physical examination revealed the absence of breath sounds on the right, and normal leftsided breath sounds. He was initially treated with oxygen to relieve the dyspnea, but his clinical state worsened. A repeated chest spiral CT scan showed complete right lung atelectasis, with plugging of the right main bronchus (Figure 1A and 1B).

The preoperative workup consisted of routine blood examination, electrolyte assays and an ECG. Anti-inflammatory and anti-expectorant medications were administered.

Airway angiography and right bronchial forceps biopsy: The patient underwent airway angiography and a right bronchial forceps biopsy was performed under fluoroscopy within 3 days of his admission. Lying on a DSA bed, the patient received high-flow oxygen through a nasal cannula, and electrocardiography, blood oxygen saturations, blood pressure, heart rate, and respiration were monitored.The throat was sprayed with lidocaine 3 ml. Under fluoroscopic guidance, a catheter was passed over a hydrophilic guidewire through the mouth, throat, trachea and stenosis of the right main bronchus into the right intermediate bronchus. The transcatheter was injected with 2 ml 2% lidocaine, 1 mg epinephrine and 3 ml saline to reduce bleeding. Airway angiography revealed that the opening of right upper bronchus, the initial part of the right intermediate bronchus and the right main bronchus distal were completely blocked. The catheter was then advanced into the right intermediate bronchus, and the hydrophilic guidewire was exchanged with a strengthened guidewire. The catheter was then removed, and a long sheath was introduced over the strengthened guidewire to the site of airway stenosis; a biopsy forceps was then introduced through the sheath [4,5]. Under digital subtraction angiographic (DSA) guidance, two or three grain-sized specimens were obtained from different parts of the stenosed area for histopathological analysis. Histopathological results yielded the diagnosis of a squamous cell carcinoma. Figure 1: A-B: chest MSCT showed right lung compete atelectasis. C-D: The tumor in hilum of the right lung had significantly reduced in size 2 months after the perfusion of regional chemotherapy through the bronchial artery.

Y-shaped airway stent implantation technology: The selfexpandable airway stent was implanted 6 days after admission. Lying on a DSA bed, the patient was monitored and prepped as described above. Under fluoroscopic guidance, a catheter was passed over a hydrophilic guidewire into the right intermediate bronchus and showed the same findings as 3 days previously. The hydrophilic guide wire was exchanged with a strengthened guidewire, and after the catheter was removed, a long sheath was introduced to the site of airway stenosis. The catheter and another strengthened guidewire were introduced through the sheath into the right upper bronchus. The sheath was then removed to leave the two strengthened guidewires. The custom-made Y-shaped airway stent and delivery system were introduced along these guidewire, and quickly released after an appropriate position was determined under fluoroscopy [6-8] (Figure 2A-2C). Repeated transcatheter airway angiography showed that the location of the stent was good, and the lumen of the right bronchus was patent.

After the procedure, the patients’ vital signs were monitored, and the presence or absence of hemoptysis and extent of relief from dyspnea were noted. Anti-inflammatory and expectorant drugs as well as aerosol inhalation (20 ml saline, 5 ml 2% lidocaine, 0.2 g amikacin, 5 mg dexamethasone, and 8,000 U chymotrypsin) were routinely prescribed to eliminate pain, irritation, and local inflammation due to the stent. Further treatment was administered according to the pathological findings.

Bronchial artery regional perfusion chemotherapy: After stenting and 13 days after admission, the patient underwent regional perfusion chemotherapy via the right bronchial artery under DSA. The right femoral artery was punctured after local anesthesia using 5 ml 2% lidocaine was administered, and a 5F vascular sheath was inserted. A 0.035-inch hydrophilic guidewire with a 5F Cobra catheter was introduced through the sheath into the right bronchial artery, and angiography showed right bronchial artery thickening with abnormal flaky staining areas in the hilum of the right lung (Figure 3). Chemotherapy was administered slowly via the catheter, which included 1,250 mg fluorouracil, 50 mg pirarubicin and oxaliplatin, each in 160 ml 5% glucose. The sheath and catheter were removed, and hemostasis was ensured with a compression bandage and immobility for 24 hours [9,10]. 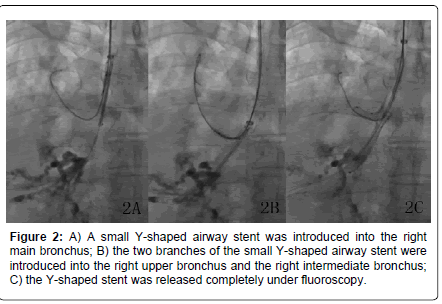 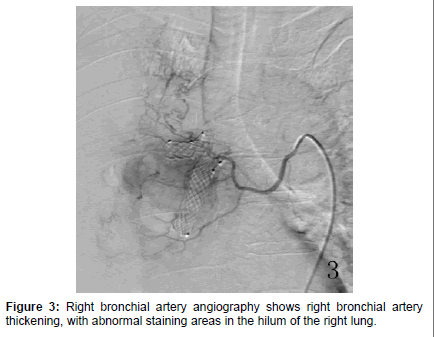 The patient’s breathing was normal 1 month after bronchial artery regional perfusion chemotherapy. A repeat chest MSCT at this time showed that the right lung had expanded fully, and the obstruction in the right-sided hilum was significantly decreased compared with the preoperative images. The second and third bronchial artery regional perfusion chemotherapy treatments were administered 4 and 8 weeks later, after which the patient’s chest tightness completely resolved. A further follow-up chest MSCT (Figure 1C and 1D) showed that the tumor continued to decrease in size. Bronchoscopy revealed a small amount of granulation tissue hyperplasia at the stent edges. Radiotherapy was given 7 days after the third bronchial artery regional perfusion chemotherapy on 30 April, 2012. After two years of followup, the patient was still alive, and no longer breathing difficultied, chest CT review showed that the tumor was no significant progress.

Lung cancer is one of the most common malignant tumors worldwide, with an increasing incidence. Approximately 80% of patients with lung cancer are diagnosed with advanced stage disease,at which point the best time for surgery or radical treatment is passed. The patient in our study had a very poor quality of life on presentation.

Interventional radiology technology has been used to introduce vascular sheaths over guidewires, and biopsy specimens have been successfully obtained by inserting biopsy forceps through the vascular sheath in patients with biliary tract stenosis and severe esophageal stenosis [4,5]. We performed a DSA-guided forceps biopsy through the vascular sheath in a patient with severe airway stenosis, with accurate localization, technical success and high levels of safety. This technique effectively and rapidly obtained samples for histopathological analysis. Simultaneous airway imaging was used to identify specific parts of the tumor that involved the airway, and the measurement data was used to create a specific airway stent. The Y-shaped stent successfully relieved the airway stenosis. The patient was given three courses of bronchial artery regional perfusion chemotherapy after dyspnea was improved. The tumor in the lung hilum significantly decreased in size, and radiotherapy was used to destroy residual neoplastic lesions.

This case describes the use of a series of sequential interventional therapies to treat a patient in extremis from airway stenosis secondary to a lung tumor. Not only did this therapy improve the quality of life of the patient, but it is likely to have prolonged his survival.

We are very grateful to all who gave the helps to this study, especially Dr Han Xin-Wei and Wang Zhong-Gao.

Copyright: © 2015 Gang W, et al. This is an open-access article distributed under the terms of the Creative Commons Attribution License, which permits unrestricted use, distribution, and reproduction in any medium, provided the original author and source are credited