The Use of a Modified Occlusal Guard in Comatose Patients

Copyright: © 2014 Ansari M. This is an open-access article distributed under the terms of the Creative Commons Attribution License, which permits unrestricted use, distribution, and reproduction in any medium, provided the original author and source are credited.

When a comatose patient experiences a seizure event, his or her healthcare provider’s main concern is the stabilization of the patient. However, it is important to provide protection to the oral structures to prevent severe damage from reflex grinding, masticating, and gnawing. There are several appliances available for this necessary protection but these are often inaccessible in developing countries due to various reasons, such as lack of availability or financial constraints. Sports mouth guards, which reduce the chance of shock, concussions, and other injuries as a result of high impact collisions and blows during athletic competition, are inexpensive and widely available in these developing countries. A simple mouth guard can be constructed from these pre-existing mouth guards which would be sufficient to provide the needed support for the aforementioned oral structures during seizure events. This case report presents a mouth guard fabricated from inexpensive sports mouth guards, specifically to prevent trauma to the tongue and other oral structures during seizures in a comatose patient.

The management of oral trauma in comatose patients experiencing seizures is absolutely crucial. The trauma can cause several complications and distress in patients that can easily be avoided with preventative measures [1,2]. Comatose patients exhibit reflex bruxing, masticating, and gnawing, called neuropathological chewing during seizure activity resulting in severe trauma to the oral structures [3,4]. In patients with brain injury, the fine coordination between the jaw and the tongue movements may be lost, resulting in the tongue becoming juxtaposed between the maxillary and mandibular teeth [5]. Dental care experts need to be included in the care of comatose patients to ensure that the proper steps to prevent this damage is taken [6,7].

The patient was admitted to Lilavati Hospital, in Mumbai, India, for a total laparoscopic hysterectomy. Indications for surgery were longstanding, severe polymenorrhagia for a period of one and a half years, not responding to drug treatment. Preoperative anesthesia fitness was assessed at ASA grade 1. Her past medical history included three caesarian sections under spinal anesthesia, a breast lumpectomy, D&C, and a hysteroscopy with Mirena device insertion, under general anesthesia. The patient was administered general anesthesia by the anesthetist in the following sequence: Pre-oxygenation 3-4 minutes, induction with IV Fentanyl 100 mcg, IV Midazolam 2 mg, IV Propofol 140 mg, IV Atracurium 40 mg. The patient was ventilated with a face mask using 100% oxygen and cevoflunate for 3 minutes, intubated with a #7 endotracheal tube, and tube position was confirmed and fixed.

Approximately 20 minutes into the surgery the anesthesia machine monitor showed that the oxygen saturation had dropped to 80% and began alarming. Despite attempts by the anesthetist to rectify the situation, O2 Saturation dropped further to 60% and the heart rate reduced to 50 beats per minute. Atropine 0.6 mg IV was given, but there was no improvement in the heart rate. On chest auscultation, air entry was decreased on the right side and minimally on the left side. The heart rate started dropping to 45 beats per minute while the pulses became feeble. Atropine 0.6 mg IV was repeated and IV adrenaline 1:1000 1 ml was given. Cardiopulmonary resuscitation CPR was started. After 1 minute, adrenaline 1 ml IV was repeated, and CPR continued. At this point, another anesthetist was called in and he checked and found the endotracheal tube tip placed behind the larynx. Using a bougie, tracheal intubation was done by him with another endotracheal tube and ventilated with 100% O2. Then he removed the old tube. Meanwhile, CPR was continued and within 30 seconds of intubation, O2 saturation increased to 80% and in further 10 seconds to 100%. The patient was shifted to the intensive care unit after being stabilized. Neurological evaluation was done and the patient was found to be unconscious. Doll’s eye movements were present, both pupils sluggishly reacted to light, corneal reflexes were found to be bilaterally sluggish, flexes upper limbs in response to pain, and extensor plantar reflexes were present in both limbs. Due to seizure activity, midazolam infusion was started. The patient had myoclonic jerks for which the following treatment was immediately administered: IV. Encorate 1000 mg in 5% dextrose 100 ml over 30 minutes and a maintenance dose of 500 mg IV 8 hourly, along with Pantoprazole IV, Ceftiraxone IV, Piracetam IV, Phenytoin IV, and Mannitol IV.

The patient continued to have myoclonic jerks throughout the night and it was noted that she was biting her tongue during seizure activity (Figure 1). The anterior third of the tongue had lacerations due to the trauma from maxillary and mandibular teeth, the upper lip had a traumatic ulceration, and the patient was also biting into the airway tube during clenching. 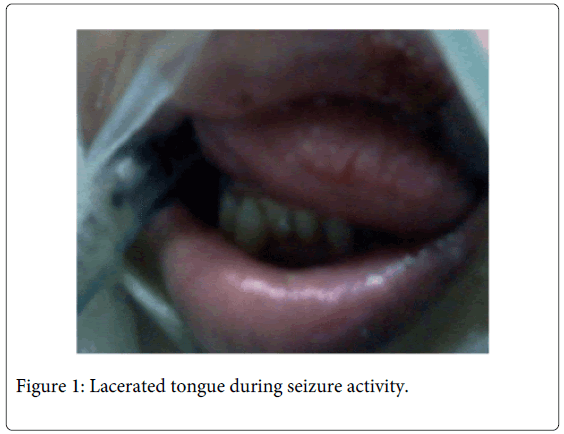 A complete oral and dental exam was not possible at this time due to the restricted mouth opening. The patient seemed to have a significant over jet and a deep bite. The upper lip and the anterior third of the tongue showed severe traumatic ulceration. The tongue was swollen resulting in potential for further injury. An immediate need for a mouth guard was clearly present. A mouth guard that would prevent further damage to the oral structures was fashioned by fusing the occlusal surfaces of two sports mouth guards together (Figure 2). The lingual walls of the mouth guards were trimmed away. The back of the unit was cut to extend only up to the distal side of the first molars in order to allow the endotracheal tube to pass through without being compressed (Figure 3). A hole was made in the midline of the labial wall to attach a piece to tape as a safety measure to prevent the mouth guard from being dislodged into the oropharynx. The modified mouth guard was placed into the patient’s mouth, instantly protecting the patient’s lips and tongue from further injury. The endotracheal tube fit comfortably distal to the molars without causing any distress to the patient (Figure 4). The care givers were trained in the placement and removal of the appliance for oral hygiene and airway care. Within four days, the traumatic lesions on the lips and the tongue showed marked improvement. No new lesions were apparent after this time. After approximately one week, a tracheotomy was performed and the oral airway tube was removed making it easier to take care of the mouth and dentition. Ten days later, the neuropathological chewing reflex had subsided and the use of the occlusal appliance was no longer needed.

The patient's self-inflicted injuries to the tongue and lips started to improve within twenty-four hours of the placement of the modified occlusal guard. The respiratory distress from the chewing of the endotracheal tube was no longer an issue, because the tube passed between the maxillary and mandibular 2nd and 3rd molars (Figure 5). This type of occlusal guard is a better design than some of the earlier models because it covers both the maxillary and mandibular teeth up-to the 1st molars, resulting in a more comfortable fit, better retention in the mouth, and protection for the endotracheal tube. This type of occlusal guard should be routinely available in hospital Intensive Care Units and emergency rooms everywhere. It should be used both for prevention and treatment of self-inflicted trauma to the tongue and perioral tissues in severe brain injury patients. 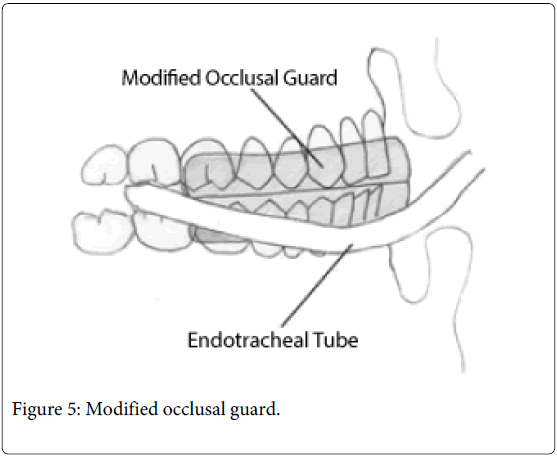 Early intervention and a team approach are necessary in preventing and treating injuries to the oral tissues in brain injury patients. The use of appliance in this patient showed dramatic results within a short period of time. In other patients, where long term appliance therapy may be needed, a lab fabricated appliance with proper impressions may be required. Intensive care physicians and neurologists must be educated in the usefulness of these appliances.

The author would like to thank Katie Vaughan and Omar Ansari both students at the University of South Carolina for Typing, Proof reading and editing the document.