Copyright: © 2016 Yassin NA, et al. This is an open-access article distributed under the terms of the Creative Commons Attribution License; which permits unrestricted use; distribution; and reproduction in any medium; provided the original author and source are credited.

Aim: Recto-vaginal fistulae are distressing. They are most commonly caused by obstetric injury, a failed pelvic anastomosis, or Crohn’s disease. Biological infill materials have been used in their management. We assessed the efficacy of biological infill materials when recto-vaginal fistulae. Methods: We applied the Preferred Reporting Items for Systematic Reviews and Meta-Analyses (PRISMA) guidelines. Results: Twenty-five articles yielded a pooled total of 105 patients; 27% had Crohn’s disease. Fifty-six percent of patients had treatment with glue, 31% with plug, 6% with permacol paste and 7% with stem-cells. For Crohn’s, 50% were treated with glue, 39% with a fistula plug and 11% with stem cells. The overall healing rate for all infill materials was 41%, with the highest reported rate amongst the stem cell group (71%) and the lowest (32%) for glue. For Crohn's, the overall healing rate was 36%, glue was the lowest (14%), followed by the anal fistula plug (55%). Stem cells had a healing rate of 67%. Conclusions: Overall, the use of infill materials to treat Crohn’s and non-Crohn’s related recto-vaginal fistulae is associated with healing in approximately 41% of cases. Crohn’s related recto-vaginal fistulae represent a more challenging group of patients to treat.

Fistulae to the vagina distress and stigmatise women and their management remains a challenge [1]. Some may arise from intraperitoneal organs, such as the appendix, terminal ileum or sigmoid colon, where they usually communicate with the vaginal fornix. Treatment involves surgical resection of the origin of fistulation. Rectovaginal fistulae (RVF) are more complicated to manage. They will usually be found in the posterior midline of the vagina. Those that are obstetric-related may have a concomitant anal sphincter injury. Several factors are implicated in the success of any surgical repair including anatomical aspects and aetiology. The rectovaginal septum may be thin and poorly vascularised. Many cases of local repair result in failure. Other confounders are medical comorbidities, inflammatory bowel disease, persistent infection and the presence of scar tissue [2,3].

This review was conducted according to the Preferred Reporting Items for Systematic Reviews and Meta-Analyses (PRISMA) guidelines [30].

As a consequence of the methodological nature of the studies, quantitative data analyses were only performed for eligible studies with adequate data. Due to study heterogeneity, small patient numbers and dearth of comparative studies, meta-analysis was not suitable; therefore data were pooled without formal statistical analysis.

Two-hundred and sixty-eight studies were identified, of which 121 were excluded: reviews (n=7), letters or commentaries (n=3), or those that did not specifically assess rectovaginal fistulae (n=111). 147 studies were assessable for abstract screening. Manual searching of references provided a further 22 studies, giving 169 studies for full evaluation. Of these, 143 were subsequently excluded as they did not satisfy the inclusion criteria and failed to provide adequate detail for data retrieval. Twenty-six studies were included in the systematic review. 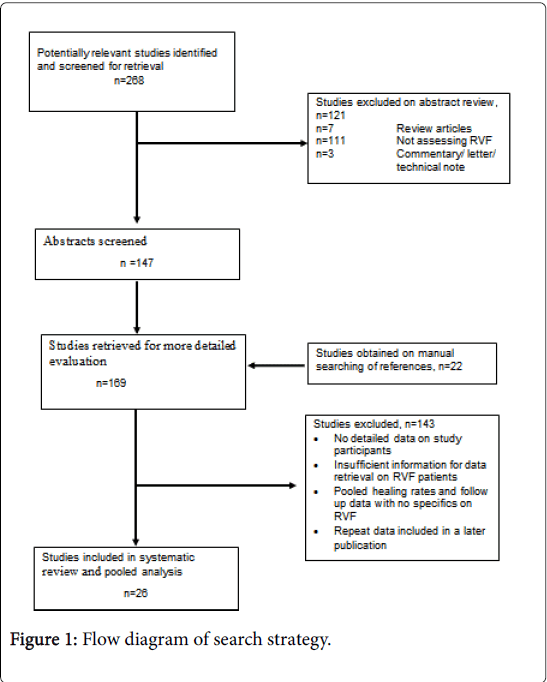 Patient age ranged from 17-76 years with the mean follow up reported between 2 and 46 months. Most studies reported glue as the infill material under assessment either alone (n=16) or in combination with stem cells (n=1), or in comparison with a fistula plug (n=2). Four studies used plugs alone and one study compared fistula plug and mesh. Only one study reported the use of stem cells alone as the chosen infill material (Table 1).

Fistula healing was assessed clinically only in all but two studies. In these two studies, MRI was used to determine resolution of the tract in addition to clinical healing [36,56]. The overall fistula “healing” rate with all available infill materials was 41% (n=43/105) with the highest rate being amongst those receiving stem cells therapy (n=5/7, 71%), followed by permacol paste (67%, n=4/6) although it is important to note that the number of included patients is small (Tables 3 and 4). Fibrin glue was associated with the poorest healing rate of 32% (n=19/59). Within the Crohn’s population, the overall healing rate was lower (n=10/28, 36%). Glue had the lowest healing rates with 2/14 patients healed (14%), followed by the anal fistula plug (n=6/11, 55%). The use of stem cells yielded a healing rate of 67% (n=2/3), although it is important to note the small number of patients included in the Crohn’s group.

Table 4: Pooled analysis of healing rates, overall and in the Crohn’s subgroup.

The reasons for treatment failure are multifactorial. Fistula aetiology clearly plays an important role. Crohn’s fistulae are more refractory to therapies. El Gazaz et al identified smoking and steroid use to be associated with lower healing rates, whereas immunomodulator use assisted healing [50]. The same group published in a separate study on obstetric and cryptoglandular rectovaginal fistulae that a higher body mass index (BMI), in addition to the number of previous attempts at repair, reduced fistula healing rates. Patient age, smoking status and other comorbidities exerted no obvious effect upon fistula healing [51].

Some of the limitations of this systematic review are the small numbers included in some of the studies, which make positive healing results seem significant. Researchers have to bear in mind that the results of pilot and feasibility studies although encouraging, should be taken with the limitations of small sample numbers in mind. Healing was seen in 67% and 71% of the permacol and stem cell groups respectively for all patients [41,45,38]. In the Crohn’s cohort, 67% of patients healed using stem cells. However, as highlighted above, the sample numbers were rather small for these studies and therefore the results should be interpreted with that limiting factor in mind.

The existing literature has significant limitations, including variability in follow up duration, which has been as short as two months, and the assumption that clinical healing alone reflects true healing without verification using suitable imaging modalities. Only two studies have reported the use of MRI as part of the assessment of healing of anal fistulae [36,56]. Although radiological healing rates of rectovaginal fistulae were not specifically addressed in those studies, it was reported for transphincteric fistulae that skin healing was identified as early as two weeks after treatment in 77% of patients, yet only 3% of those patients remained asymptomatic at 14 months or healed at 16 months [36].

In order to optimise fistula healing rates, surgeons may find it beneficial to consider each component of the fistula tract and the underlying pathology, and even employ a multimodal approach. The internal opening, the fistula tract itself, and any secondary extensions all need management. Some argue that removing granulation tissue, epithelial lining and surrounding fistula tract tissue might favour wound healing.

The operative management of the internal opening and fistula tract varied between the studies in this systematic review. A simple ‘figure of eight’ suture was placed before or after the instillation of the chosen infill materials. Some studies combined this with the use of a mucosal advancement flap and in one study an endorectal advancement flap was used. A number of studies were excluded if more extensive surgery was reported, as it is unclear whether the reported healing rates were due to the use of a specific infill material or due to the surgical management of the internal opening. Similarly, the fistula tract management varied widely, with some surgeons advocating curettage whereas others advised against it; some used a brush to deal with the granulation tissue and others washed with either saline or hydrogen peroxide. No consensus was found regarding bowel preparation, perioperative antibiotics, restriction in physical activity and sexual intercourse, or the use of sitz baths. The evidence is limited by the diversity of study designs and the low quality of the published literature in this area.

An appropriate and durable biological material has the potential to fill in the defect and act as a scaffold for the delivery of cells, be they fibroblasts or stem cells. Animal studies show that fibrin glue is an unsuitable material for use and as an alternative collagen paste may act as a better infill material as well as a vehicle for the delivery of cells and drugs [45,57]. Rectovaginal fistulae pose an additional challenge regarding the choice of infill material, as the tracts are short and more difficult to manage with a lower chance of success. Nevertheless, the use of the anal fistula plug was supported in the Anal Fistula Plug (AFP) consensus statement in 2007. A Consensus conference was held in Chicago to develop uniformity of opinion from 15 experienced surgeons with first-hand experience of using the AFP, five of whom had success rates as high as 85% in 50 or more cases each. The expert panel felt that transphincteric fistulae were the optimal indication for the use of the plug. For ano/recto-vaginal fistulae, it was felt that due to the short tract it was less likely that the plug would be successful. However, the plug was still felt to be a reasonable alternative to other operative options. It is also important to note that all 15 surgeons acknowledged that they had received full payment and honoraria by the AFP designers to produce such a consensus statement [58].

Management of fistulae with autologous stem cells represent a novel approach which might yield promising results in the future. Only one group have published in this area [57], with very small numbers of rectovaginal fistulae, but encouraging healing rates. Whether a combination of stem cells and an infill material as a vehicle alters outcome remains to be determined.

Another potentially novel scaffold for fistula repair and drug delivery material is the poly-porous microsphere. Such microspheres have yet to be used in the treatment of rectovaginal fistulae, and their retention at the fistula site may pose difficulties, but animal models have provided promising results. An animal model using poly-porous (D,L-lactide-co-glycolide) microspheres containing either antibacterial silver-releasing degradable phosphate glass or metronidazole has shown that they may be a potentially useful scaffold for guided tissue regeneration and for local drug delivery [59].

This systematic review summarises the evidence with regards the use of infill materials as management options when treating rectovaginal fistulae. Patients are more aware of the variety of surgical options available, and may choose simpler options over more invasive alternatives [61]. Patients with Crohn’s disease have limited options including medical treatment in the form of immunomodulators +/- anti-TNF therapy, but some may still require proctectomy [62]. Overall healing rates of 41% for rectovaginal fistula patients, or 36% for the patients with Crohn’s disease, may be an acceptable option when the alternative could be major surgery or a stoma. 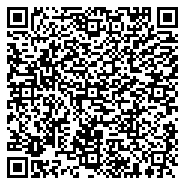