The Use of SHED in Cellular Therapy and Disease Modeling

Copyright: © 2014 Evangelinellis, et al. This is an open-access article distributed under the terms of the Creative Commons Attribution License, which permits unrestricted use, distribution, and reproduction in any medium, provided the original author and source are credited.

During the last decade, stem cells emerged as a powerful instrument for regenerative medicine. Stem cells have the essential ability to renewal and differentiate into other cell lineages. Besides the polemic about the use of embryonic stem cells, adult stem cells represent a valid alternative avoiding ethical concerns. Different from others adult stem cells, which involved invasive procedures to be obtained, dental pulp represent a useful source of stem cells, with easy accesses. Here we focused on stem cells from human exfoliated deciduous teeth and their main characteristics, uses in regenerative medicine, immunomodulatory proprieties and as a cell source for modeling disease. 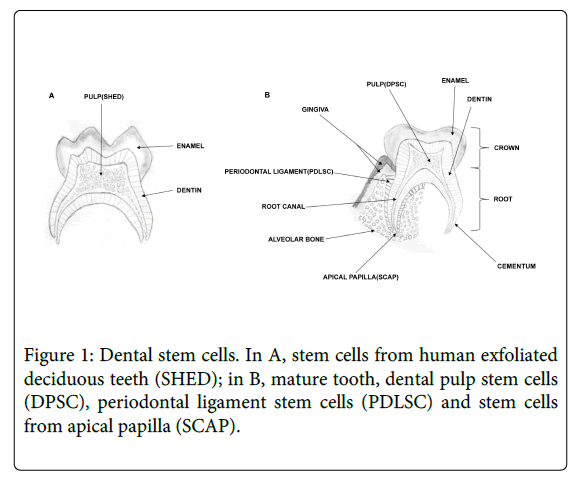 Deciduous teeth are significantly different from permanent teeth regarding their developmental processes, function and tissue structure. The transition from deciduous teeth to adult permanent teeth is a very exclusive and dynamic process in which the development and eruption of permanent teeth coordinate with the resorption of the roots of deciduous teeth [21]. Dental pulp is a well-defined compartment of soft tissue that retains a primitive structure similar to that of the gelatinous tissue of the umbilical cord. In 2003, Miura and coworkers isolated a population of multipotent stem cells from the pulp of exfoliated deciduous teeth [8]. SHED have been identified as a population of clonogenic, plastic adherent, highly proliferative postnatal stem cells capable of differentiate into odontogenic, adipogenic, osteogenic, neural, hepatocytes and endothelial cells [8,22-25]. Importantly, SHED are derived from a readily accessible tissue source, human deciduous teeth that are expendable and routinely exfoliated in childhood with little morbidity.

SHED exhibit higher proliferation rates comparing to DPSC and bone marrow-derived MSCs as well as increased population-doubling time. In addition, stem cells characteristics are present even after prolonged culture time, which is essential for expand cells before in vivo application. In vitro handling revealed that SHED present plasticity and ability to form neural-like spheres in a medium optimized for neural stem cells [8,25,26].

SHED can be stored for long-term successfully using cell cryopreservation solution and remains viable for use even if stored for years. SHED isolated from cryopreserved dental pulp for over 2 years showed similar stem cell properties when compared to SHED isolated from fresh tissues [29]. Cells harvested near end of log phase growth (approximately 80-90% of confluence) are best for cryopreservation. The cells are preserved in liquid nitrogen vapor at a temperature of less than -150°C [16,30-32]. The cryopreserved capability associated with regenerative potential turns SHED candidates for stem cell bio banking storage.

Roles of SHED in Regenerative Medicine

Several studies suggest the use of SHED in dental tissue engineering [33,34]. Miura and co-workers examined the capacity of SHED to form odontoblasts, transplanting cells into immunocompromised mice and observed the presence of odontoblasts associated with a dentin-like structure. However, SHED were unable to form a complete dentine-pulp complex as observed with DPSCs in vivo [8].

SHED could be the ideal source of cells for the induction of bone formation or for repairing damaged teeth [35], after transplant subcutaneously in mice SHED seeded on a biodegradable scaffold prepared inside human tooth slices. In addition, the scaffold was vascularized when endothelial cells were co-transplanted.

In vitro and in vivo approaches to investigate the potential of SHED to differentiate into functional angiogenic endothelium and odontoblasts referred that they differentiated into functional blood vessels connecting to the host vasculature. Furthermore, the mineralized tissue generated by SHED in the pulp chamber of the tooth slice/scaffold had morphological features of dentin, including the presence of predentin and dentinal tubules, which distinguish it from osteoid tissue [24].

Several studies demonstrated that mesenchymal stem cells produce various cytokines and these molecules are directly involved in a range of pharmacological events of MSCs, especially in skin biology [37-40]. In a study for wrinkles caused by UV-B photo-damage, SHED or SHED conditioned medium injected subcutaneously reduced the wrinkles comparing with the control group. In addition, SHED had effects on human dermal fibroblasts (HDFs) by increasing collagen synthesis and by activating proliferation and migration activity of HDFs, suggesting that SHED or SHED conditioned medium can be used for the treatment of photo aging and wound healing [41].

Considering therapeutic approaches for medicine regenerative regarding wound healing, until now, the treatment uses surgical operations and pharmacological strategies, which usually result in imperfect healing and scars, that causes great stress for the patient [40,42]. Several lines of treatment have reported mesenchymal stem cells and fibroblasts as an alternative treatment, accelerating the wound healing through differentiation and paracrine effect [37-39]. SHED were used for wound healing and revealed similar wound repair process to other mesenchymal stem cells [41].

Regarding neurodegenerative diseases, most of them remain without cure or effective therapeutic approaches. Parkinson’s disease, one of the most common neurodegenerative diseases, is caused by the loss of dopaminergic neurons in the substantia nigra, leading to symptoms of tremor, rigidity, and bradykinesia [43]. Intracerebral transplantation of dopaminergic neurons or progenitors derived from fetal neural tissues has been proved a promising approach for Parkinson’s disease [44-47]. Recently a model to investigate a therapeutic approach to Parkinson’s disease in rats demonstrated that SHED is able to form neurospheres and can be induced to dopaminergic neurons under conditions. SHED or SHED derived-spheres transplanted into the striatum of parkinsonian rats revealed behavioral improvement until 4 weeks. However a better recovery effect after 4 weeks could be observed just using SHED-derived spheres [48].

SHED were also used to treat stroke, the third leading cause of death in the world and the most frequent cause of long-term disability in humans [49,50]. After 15 days of SHED conditioned medium treatment to stroke a progressive improvement in motor disability was noted in comparison with bone marrow stem cells conditioned medium or medium only. Moreover, it was also observed a decrease in the infarct volume, a promotion of neurogenesis and angiogenesis after cerebral ischemia [50]. Another work regarding hypoxia-ischemia mice model, revealed significant neurological recovery 24 hours after SHED injection in the injured brain and lower tissue loss and reduced number of apoptotic cells by histopathological analyses. The mechanism suggested is that SHED inhibited the expression of pro-inflammatory cytokines and increased the expression of anti-inflammatory ones, suggesting paracrine mechanisms involved [51]. Paracrine mechanism was also suggested by another group that treated spinal cord injury in an acute contused rat model. After SHED transplantation, animal improved locomotor function [52].

Stem cell therapy has been highlighted as a tool for treating diseases without efficient therapy. There are some convincing evidences that MSC escape from immune recognition, via interaction with a variety of immune cells including T and B lymphocytes, natural killer cells and dendritic cells [53,54]. Because of this, MSC can be used against inflammatory diseases, autoimmune diseases and hematopoietic stem cells or solid organ transplantation [55-58]. On the other hand, immune rejection of the transplanted cells verified by lymphocyte infiltration was also reported [59,60].

In the last years, immunomodulatory properties of MSC have been tested in animal models [61-66] and them applied in human clinical trial [57,58,67-69]. Unfortunately, for SHED little is known about their immunomodulatory properties. An in vitro study comparing SHED and BMMSC (Bone marrow mesenchymal stem cell) revealed that either BMMSC or SHED failed on eliciting the proliferation of allogenic T cells, indicating the low immunogenicity of both. Moreover, both BMMSC and SHED inhibited the proliferation of T lymphocytes stimulated with phytohemagglutinin, suggesting also an immunossupresion effect [70]. In addition, another work using SHED and also BMMSC found that SHED inhibited T helper 17 (Th17) cells in vitro and reversed systemic lupus erythematous (SLE)-like MRL/lpr mice after SHED transplantation by elevating the ratio of regulatory T cells (Tregs) via Th17 cells [25].

Pluripotency is defined by the ability of a stem cell to differentiate into cell types representative of all three germ layers: ectoderm, mesoderm and endoderm [71]. Although pluripotent cells have been successfully generated and can be induced to differentiate in vitro and in vivo into various cell types [72,73], the use of embryonic stem cells is controversial and frequently associated to ethical concerns [74,75]. In 2006, Takahashi and Yamanaka developed a pioneer method for inducing pluripotency in somatic cells. For the generation of induced pluripotent stem cells (IPSC), 4 factors – c-Myc, Oct4, Klf4 and Sox2 – were introduced into somatic cells, allowing the possibility of obtaining autologous pluripotent embryonic-like stem cells bypassing the ethical issues of dealing with embryonic stem cells [76]. IPSC represents a way to study biological mechanisms of diseases. Several groups are using IPSC for modeling a variety of diseases such as amyotrophic lateral sclerosis, spinal muscular atrophy, Rett’s Syndrome, Schizophrenia, Parkinson´s disease, Timothy Syndrome, Long QT Syndrome, Huntington’s disease, heart diseases, Alzheimer’s disease, Duchenne muscular dystrophy and others [77-91].

In order to generate efficiently IPSC, several tissues were used, such as skin fibroblast, keratinocytes, blood progenitors and several types of adult stem cells, such as neural, cord blood, adipose, bone marrow and dental pulp [92-101]. These studies demonstrated that the timing and the factors required in reprogramming might vary depending on cellular context [92-95,97,102]. The 4 factors were used to reprogram dental stem cells, like SHED, SCAP and DPSCs. All these dental cells were successfully reprogrammed into IPSC at relatively higher rates [100,101]. Furthermore, SHED could be reprogrammed in feeder-free conditions in a faster way, still presenting normal karyotypes and were able to differentiated in vitro and in vivo [101]. A transcriptome analyses study comparing human neurons generated using iPSC derived from SHED or skin fibroblasts reported that expression profiling of neurons derived from SHED IPSC were enriched for genes implicated in schizophrenia (SZ), which suggests that neurons derived from SHED IPSC are suitable for disease-modeling neuropsychiatric disorder, presenting advantages than IPSC derived from fibroblast [103] .

For these reasons, dental pulp sounds to be a good source for iPSC disease modeling, especially for neurological diseases, also considering not just the ease for obtaining but the reprogramming facility [100,101,103].

Deciduous teeth are naturally dropped during childhood providing a source of cells for cell therapy, tissue engineering and modeling diseases through reprogramming techniques. The ease of harvesting, non-involvement of bioethical issues and expansive capacity of SHED represent a real promise for future therapies. .