Introduction: The use of locking plates over other conventional methods in fusion and reconstructive foot surgery has become popular. We report our experience with the use of Variable Angle SynthesTM plates in reconstructive and joint fusion procedures.

Methods: Seventy one foot reconstructive and fusion procedures in 48 consecutive patients were performed between June 2012 and September 2014. Data was sourced from theatre log, ORMIS, PACS and Dictate IT. An independent observer carried out retrospective analysis of prospectively collected data on patient demographics, indication for surgery, co-morbidities, type of surgical procedure, radiological outcome of union rates and time to union, pre and post-op patient reported outcome scores (MOXFQ score and EQ-5D) and complication rates.

Results: The mean age was 59 (range 32-78) years with a 2:1 female predominance. Indication for surgery was degenerative arthritis (55 procedures) in most cases. The overall union rate was 93% with time to union being 6 to 16 weeks in osteotomies and 12 to 32 weeks in fusion procedures. Amongst the 8 delayed unions (3 smokers, 1 Diabetic) and 5 non-unions (2 Diabetics, 2 rheumatoid arthritis on Anti-TNF treatment). There was 1 peri-implant fracture, 2 superficial wound infections, 3 metalwork failures. There was a significant improvement in MOXFQ and EQ-5D scores.

Conclusion: This series reports a high union rate, a low number of fixation-related complications, and significant improvement in the patient reported outcome measures with the use of Variable Angle SynthesTM foot plates. There was an association between delayed/non-union and smoking, diabetes and inflammatory Arthritis.

The purpose of this study was to review our clinical experience primarily looking at fusion/union rates and patient reported outcomes in the use of Variable Angle Synthes™ foot and ankle plates in reconstructive and fusion procedures.

An independent observer carried out retrospective analysis of prospectively collected data on patient demographics, indication for surgery, co-morbidities such as diabetes, rheumatoid arthritis, peripheral vascular disease, and smoking. The type of surgical procedure, site of fusion, radiological outcome of union and time to union, pre and post-op MOXFQ score and EQ-5D-3L and any complication were recorded. The primary outcome measures were union rate; time to union and patient reported outcome measures (PROMS) using Manchester-Oxford Foot Questionnaire’s (MOXFQ’s) score and the EuroQol (EQ-5D-3L) health questionnaire. Secondary outcome measures included complications such as infection, metal work failure and revision surgery. Union was defined as lack of pain and lack of movement at the arthrodesis and radiographic evidence of healing. Radiological union was defined as bridging bony trabeculae in at least 3 cortices at the site of fusion in two orthogonal views. Nonunion was defined as radiological findings indicating a lack of osseous bridging and subchondral sclerosis at the site of fusion [9].

Statistical analysis was performed using SPSS version 21 Armonk, NY:IBM Corp. Due to the small sample size, the non-parametric Wilcoxon signed ranks test was used to compare the pre and postoperative outcomes in the MOXFQ and EQ5D to test for statistical significance for improvement. The subcategories of the MOXFQ were also analysed independently using the same test to assess whether there were any changes within the individual parameters. P value of 0.05 was set as significant. Health related quality of life was assessed using EQ-5D-3L consisting of five domains (mobility, self-care, usual activities, pain/discomfort, and anxiety/depression).

A total of 71 surgical procedures were performed in 47 patients who underwent foot fusion/reconstructive procedures using Variable angle Synthes™ locking plates. There were 17 (36%) male and 30(64%) female patients with a mean age of 59.5 (range 32-79 years). The mean time to follow-up for PROMS was 8 months (range, 6-9 months). Two patients were lost to follow u. Twenty four patients had both preoperative and postoperative PROMs recorded. The indications for surgery were as outlined in Table 1 most common indication was degenerative arthritis (55 procedures in 35 patients).

Patients had either a Fusion or osteotomy or combination of both procedures. Summary of the surgical procedures is outlined in Table 2. Fusion procedures (63) included–single Joint fusion (28), two joint fusions (7) and three joint fusions (7). Most common joints fused were–Tarsometatarsal (1st ray-11, lesser toe rays-22) and talonavicular (11).

Table 2: Summary of the Surgical Procedures. 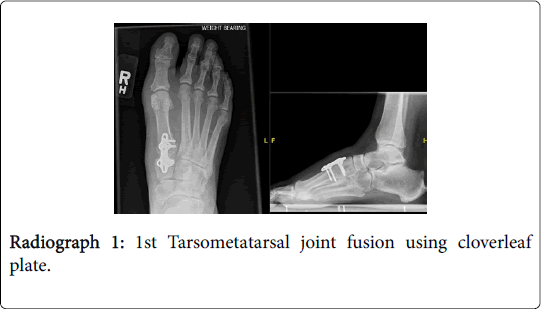 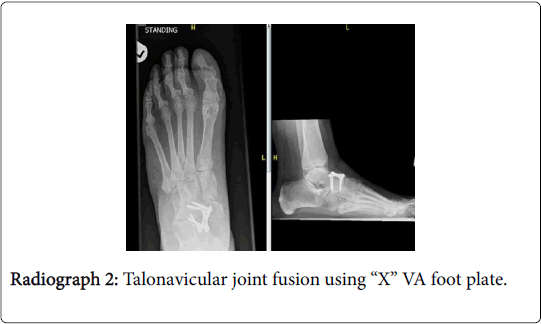 The overall union rate was 93%; time to union was 6 to 16 weeks in osteotomies and 12 to 32 weeks in fusion procedures.

There were 8 delayed unions and 5 non-unions. Association of any significant medical co-morbidity or history of smoking were as outlined in Table 3.

Rheumatoid arthritis: The 2 patients with rheumatoid arthritis were on arthritis on Anti-TNF treatment and chronic steroid use. Among the 5 non-unions 2 patients underwent revision surgery and 3 were offered no further treatment, as the non-unions were asymptomatic. The joints that progressed to non-union following primary arthrodesis included 2 calcaneocuboid, 2 Tarsometatarsal and 1 talonavicular joint. There was 1 implant fracture, 3 other metalwork failures, 2 superficial wound infections and one patient developed complex regional pain syndrome. The mean preoperative MOXFQ summary index score was 44.0 (95% confidence interval [CI]=38.4-49.6) out of 64, and the mean postoperative score was 31 (95% CI=24.2-37.8) out of 64 and this difference was statistically significant (p value <0.001). The mean pre-operative and post-operative EQ-5D were 0.57 and 0.73 respective. Table 4 and Figure 1 summarize the mean MOXFQ domain scores; MOXFQ summary Index and the EQ-5D Index scores pre and post treatment. It also highlights if there has been a minimum clinically important change in the scores for the individual MOXFQ domains postoperatively. There was a significant improvement in both the total M0XFQ Summary Index metric score (68.82 vs. 49, P= 0.000126) and the EQ5D (0.57 vs. 0.73, P=0.001) score following surgery. On assessing the individual parameters of the MOXFQ, there was a significant improvement in all of the three domains (Table 4)

Figure 1: Pre and post-operative MOXFQ metric scores for the three domains and the MOXFQ summary index. Figure 2: Percentage of patients with a minimal clinically significant change in each MOXFQ domain.

We performed 71 reconstructive foot or/and fusion procedures using the VA locking plate system. Joint fusion(s) for degenerative arthritis was the most common performed procedure with the single joint arthrodesis of the tarsometatarsal joint being the highest. The overall union rate for fusion was 93%. Time to union 6 to 16 weeks in osteotomies and 12 to 32 weeks in fusion procedures. Our results are comparable to other similar studies in the English literature [10].

There were 8 delayed unions and 5 non-unions in our series. It was observed that amongst the 5 non-unions 3 patients had either history of diabetes or rheumatoid arthritis or a combination of both. The 2 patients with rheumatoid arthritis were on Anti-TNF treatment and chronic steroid use. Amongst the delayed unions history of smoking in 3 patients and diabetes in 1 patient was noted. Overall non-union rate (7%) was similar to evidence quoted for fusion and reconstructive foot surgery [2,3,10-14].

Pre-operative and post-operative PROMS (MOXFQ and EQ-5D) data was available for 24 out of the 47 patients. There was significant improvement in both the total M0XFQ Summary Index metric score (68.82 vs. 49, P=0.000126) and the EQ-5D (0.57 vs. 0.73, P=0.001) score following surgery. Amongst the 5 non–unions, pre and postoperative PROMS were available for three and showed improvement, MOXFQ Summary Index metric score (47.44 vs. 36.81) and EQ-5D (0.63 vs. 0.80). On assessing the individual parameters of the MOXFQ, there was a significant improvement in all of the three domains (Pain, walking and social interaction) with the use of VA locking plates in reconstructive foot and ankle surgery. The MOXFQ, a validated 16-item PROM is split into 3 domains, namely walking/ standing, pain, and social interaction, and relates to symptoms in the foot over the previous 4 weeks [14]. The total score ranges from 0 (best) to 64 (worst), and the responsiveness of this questionnaire has previously been investigated in the context of forefoot surgery. Recent studies [15] have shown that comparable measures of anchor-based minimal clinically important change (MCIC) estimated for the MOXFQ domains measured in metric terms, were ≅ 13 for the MOXFQ walking/standing, pain, and social interaction domains, respectively. For the purposes of this investigation, we chose to use these same minimally important changes to determine, postoperatively whether an individual had, in terms of his or her response to the foot-related health measurement instrument, clinically improved significantly. We also calculated the MOXFQ summary index score. A clinically significant improvement, as described above, in at least 1 of the 3 domains was deemed to be a success. We had 2 superficial wound infections and the incidence was comparable to other similar studies [16]. The superficial wound infections resolved with oral antibiotics. We had one implant fracture about 3 months post-operatively. In 3 patients who had metalwork failure due to screw breakage one required revision surgery. There are limitations of this study. These include incomplete PROMs data, a relatively small sample size, heterogeneity of procedures. Our series has shown that the use of Variable angle Synthes™ plates in reconstructive foot and ankle surgery has good clinical outcome and an improvement in overall patient satisfaction and quality of life. We also report a high union rate, a low number of fixation-related complications, and significant improvement in patient reported outcome measures. There was an association between delayed/non-union and smoking, diabetes and inflammatory Arthritis. Previous studies [17-20] have recognized these as significant factors that influence rate of healing.

Copyright: © 2018 Perianayagam GR, et al. This is an open-access article distributed under the terms of the Creative Commons Attribution License, which permits unrestricted use, distribution, and reproduction in any medium, provided the original author and source are credited.