Background: Bromelain is a phytotherapeutic drug that is well established in medicinal use for the treatment of injuries and postoperative swelling. It is frequently recommended in otorhinolaryngological indications. However, there is lack of recent clinical data on its use in this setting.
Methods: We conducted a non-interventional study including 102 patients to evaluate postsurgical clinical (pain, edema, hematoma, signs of inflammation) and specific nasal symptoms (hindrance of nasal breathing, impairment of sleep, impairment of food intake, impairment of smell, impairment of taste). The participating physicians furthermore assessed the potential additional benefits of bromelain therapy.
Results: Clinical and specific nasal symptoms improved significantly during postoperative recovery and an additional benefit was assigned by the physicians given ratings in more than fifty percent of the documented cases. According to the physicians, the consumption of analgesics was “low” in seventy percent of the patients during adjunctive therapy with bromelain.
Conclusion: Given the good tolerability of bromelain treatment, this study substantiates its safe and efficacious use in otorhinolaryngological practice.

Bromelain is a crude, aqueous extract isolated from the stem of the pineapple plant (Ananas comosus L. , Bromeliaceae), constituting a complex mixture of proteases, enzyme inhibitors, further protein compounds as well as low-molecular-weight substances, among others. The phytotherapeutic drug has been used since decades for the treatment of inflammatory diseases, injuries and postsurgical conditions [1-3]. The mode of action of bromelain has yet to be clarified in detail [4], even though various biological activities have been described that may contribute to or may be considered as, a consequence of the anti-inflammatory action, the reduction in pain and edema-protective, edema-reducing properties [5-12]. In particular due to its anti-edematous and pain-reducing properties, bromelain is used in order to enhance postoperative recovery and thereby may contribute to a decrease in the use of non-steroidal anti-inflammatory drugs (NSAIDs).

Objective assessment of the anti-edematous effects of drugs remains a challenge. As an investigation in patients after wisdom teeth extraction [13]. Such sensitive test methods are not available for all clinical settings, however. In particular with regard to indications associated with edema and pain sensation, some authors argue that varying active pharmaceutical ingredients and formulations may exhibit differing potencies depending on the underlying type of pain and specific surgical procedures [14,15]. Exception, a beneficial effect of bromelain treatment on postoperative swelling could be persuasively demonstrated by use of a validated 3D face scanning method in a recent clinical

We therefore initiated a multicentric, prospective, noninterventional study in order to obtain further insight into the therapeutic applications and benefits of bromelain and to assess the efficiency of this phytotherapeutic after various surgical interventions within the scope of routine care in an otorhinolaryngological outpatient setting. There were no further instructions with regard to surgical technique or type of underlying disease, nor any prespecified exclusion criteria beyond the information given in the Summary of Product Characteristics.

This trial is a prospective, multicentric, non-interventional study in patients who underwent otorhinolaryngological surgery and were prescribed bromelain following surgery. The study was carried out in 16 trial centers throughout Germany during the period February- December 2016. Patients included in the study were supposed to be above the age of 12. Known hypersensitivity to the active substance bromelain, to pineapple fruit or any of the excipients of the product represented a contraindication to the intake of study medication. Due to the non-interventional character of the trial, no further inclusion or exclusion criteria were defined beyond the information given in the Summary of Product Characteristics. However, the decision to prescribe bromelain to the respective patient must have been made by the physician before the inclusion of the patient in the trial and patients were enrolled only after they had been given sufficient information and had provided written consent concerning their participation in the trial. Each patient enrolled was subject to an initial, a follow-up and a final examination. Due to the non-interventional character of the study, the chronological sequence of the visits was not prespecified.

The trial was performed according to the German Drug Law, registered at the German Federal Institute for Drugs and Medical Devices (NIS study no. 6694) and in the German Clinical Trial Register (DRKS-ID: DRKS00010112) and was approved by the Institutional Review Board of the Freiburg Ethics Commission International (Code: 015/1616).

Medication used in this trial was manufactured at Ursapharm Arzneimittel GmbH, Saarbrücken, Germany. Bromelain tablets (Bromelaintabletten hysan®) were standardized to an enzymatic activity of 500 F.I.P. (Fédération Internationale Pharmaceutique) units per tablet. Generally, patients were advised to take one bromelain tablet twice daily, in the morning and the evening before meals. However, due to the non-interventional principle of the study, varying dosing schemes could be recommended by the physicians as well.

All data for this study were recorded on a single case report form (CRF) that was filled in by the physician. Operative indication and surgical technique were documented at the initial examination and symptoms and clinical signs were subsequently documented at each visit (initial, follow-up and final examinations). Pain, edema, hematoma and signs of inflammation (e.g. erythema) were assessed on an ordinal scale of 1-5 (1=none, 2=mild, 3=moderate, 4=strong, 5=very strong) and the individual values were added to obtain an average score for each symptom and each visit. Additionally, physicians could document the intensity of pain using a visual analogue scale (VAS) or a numerical rating scale (NRS: 0-10). Average scores for all symptoms were added in order to obtain the Clinical sum score for each visit.

In order to evaluate the clinical benefit of bromelain therapy, the physicians involved were also asked to assess the extent of pain intensity, edema and hematoma during bromelain therapy as compared to the expected extent (less-equivalent-increased- not assessable).

During the follow-up and final examinations, the physicians involved evaluated the average intake of analgesics (non-steroidal antiinflammatory drugs) as: low-normal-increased or not assessable.

Postsurgical wound-healing in general was assessed by the physician at the follow-up and final examinations (very good-good-satisfactorybad), whether wound healing was observed within the expected temporal course (yes-no) and how the physician assessed wound healing with bromelain as compared to a therapy without bromelain (better-equivalent-worse or not assessable).

During the final examination, the patients evaluated treatment satisfaction with bromelain (very good-good-satisfactory-bad) and whether they would use it again under similar conditions (yes-no). Physicians assessed treatment success of bromelain (very good-goodsatisfactory- bad), the compliance of the patient (very good-goodsatisfactory- bad), whether treatment with bromelain should be continued (yes-no), whether they would prescribe bromelain again under similar conditions (yes-possibly-no) and how they assessed the period until the resumption of activities of daily living as compared to treatment without bromelain (significantly shorter-shorter-no difference-longer-significantly longer).

In this observational study without a specific primary endpoint, no a priori sample size calculation was performed. To get valid and reliable results regarding safety and efficacy, a maximum of 120 patients were planned to be included in the trial between February and December 2016.

Data are presented as mean ± standard deviation (SD) for continuous variables or as relative frequencies for categorical variables. Occasionally, percentages did not add up to 100% due to rounding. Symptom scores of each time point were compared using a repeated measures ANOVA. A p-value of<0.05 was considered as statistically significant. All analyses were performed using SAS 9.4 (SAS Institute, Cary, NC).

Altogether 16 medical practices participated in this noninterventional trial and a total of 102 patients (49 males, 53 females) were included in the study and received bromelain treatment (first patient in: 04.02.2016; last patient out: 06.12.2016). One patient was lost to follow-up at last visit, thus the ITT population included n=102 patients at baseline and first follow-up and n=101 at last follow-up visit. The safety population included all patients receiving bromelain (n=102). On average, first follow-up took place 8.18 (± 5.69) days after surgery and the last visit 20.87 (± 8.86) days after surgery. 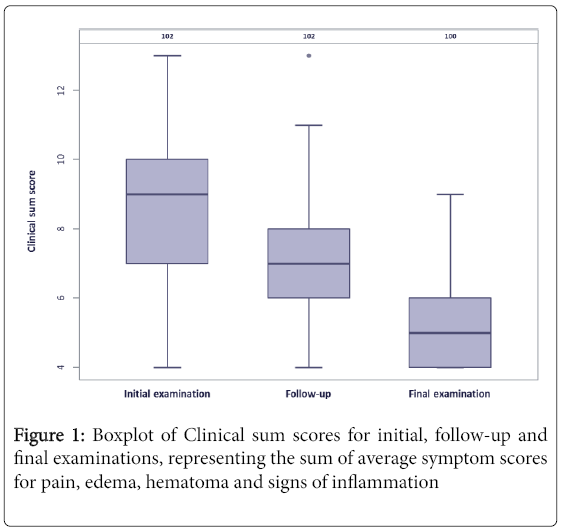 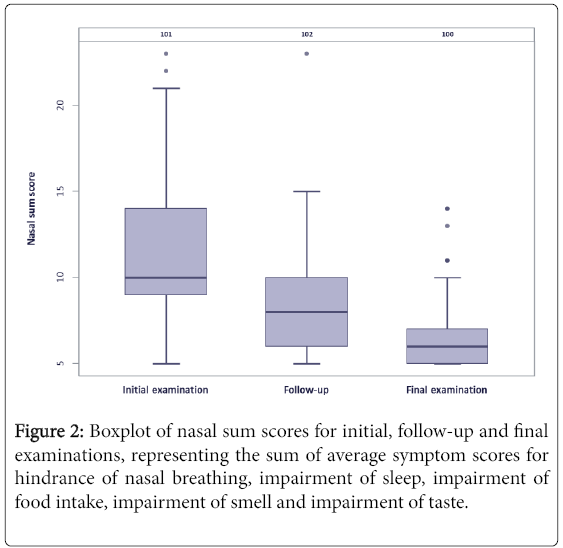 At the final examination, physicians judged the use of analgesics as “low” in 68% of their patients. Patients receiving analgesics were prescribed diclofenac (2 patients), acetaminophen (5 patients), metamizole sodium (7 patients) or ibuprofen (19 patients).

The anti-edematous action of bromelain is presumably the most important therapeutic benefit during the postoperative convalescence period. This pharmacodynamic effect is well described in various experimental and clinical studies [10,11,13,16,17] even though the mechanism on which this effect is based is not yet entirely clear [4]. The proteolytic activity of bromelain, however, is essential [17,18] and a lowering of the kininogen concentration in the plasma following treatment with bromelain also appears to play a role [19]. Furthermore, an increase of tissue permeability by fibrinolysis and promotion of reabsorption of edema fluid into blood circulation have been discussed [20]. Such a concert of activities that give the overall effect tends to be the rule rather than the exception for complex phytotherapeutic compositions and also contributes to other effects, such as pain relief and reduction in hematoma as observed for bromelain.

The major aim of this study was to investigate the routine use of bromelain in postsurgical otorhinolaryngological outpatient care. The most common indications for surgical interventions in this study were corrections of the inner nose (62 times), hindrance of nasal breathing (72), polyposis (25) and chronic rhinosinusitis (37), whereby multiple answers were possible for each patient due to comorbidity of disorders.

During the observation period, intensity of pain declined on average by 47% from the initial to the final examination, edema by 43%, hematoma by 31% and signs of inflammation by 34%. Similarly, specific nasal symptoms improved significantly during the postsurgical convalescence period. Obviously, these results must be reflected against the background of, on the one hand, self-limitation of symptoms due to the postsurgical wound healing process and remedy of cause of the complaints (e.g. hindrance of nasal breathing) and, on the other hand, the uncontrolled study design with a limited number of patients included. We therefore asked the physicians about their experience and expectations regarding the manifestation of symptoms in the respective patient against the effect observed with bromelain therapy. Physicians giving ratings for pain, edema, hematoma and wound healing substantiated the efficiency of bromelain by consistently assigning an additional benefit in more than fifty percent of the patients for each of these symptoms. Furthermore, physicians rated cumulative intake of analgesics as “low” in 68% of the patients. Tolerability of bromelain can be assessed as good overall.

Only relatively old reports on randomized, placebo-controlled trials on the postsurgical use of bromelain in otorhinolaryngology are available [21] and these were confirmed by the present observational study, allowing for an additional estimate of the therapeutic effect. Non-interventional studies are generally advantageous with regard to a more realistic depiction of everyday clinical practice, which is also reflected in the demographic distribution of the patients included in this trial (Table 1).

Thus, taking together the observed benefits of bromelain within this study and with more recent studies confirming the efficacious and safe use of this drug in other surgical indications of the face, e.g. wisdom teeth extraction [13], this non-interventional study supports the sensible use of this phytotherapeutic as an adjunctive therapy in present daily otorhinolaryngological routine.

The authors would like to acknowledge and express thanks to all physicians involved in the BROHNO-2015 study consortium for their participation.

The authors have declared that there is no further conflict of interest.

All procedures performed in studies involving human participants were in accordance with the ethical standards of the institutional research committee and with the 1964 Helsinki declaration and its later amendments or comparable ethical standards.

Copyright: © 2017 Matschke R, et al. This is an open-access article distributed under the terms of the Creative Commons Attribution License, which permits unrestricted use, distribution and reproduction in any medium, provided the original author and source are credited.