Anand B Shetty* and Roy Puthenpurackel

Copyright: © 2016 Shetty AB, et al. This is an open-access article distributed under the terms of the Creative Commons Attribution License, which permits unrestricted use, distribution, and reproduction in any medium, provided the original author and source are credited.

Background: Prosthetic devices should provide proper alignment of segments and joints for efficient gait. Rehabilitation specialists should carefully assess the best fit of prosthesis for proper force distribution and comfort. The purpose of this paper was to examine the three-dimensional forces of a permanent prosthesis compared with the temporary prosthesis of an amputee during gait.
Case description: A 58-year-old female, trans-femoral amputee, who was diagnosed with kidney disease, diabetes, and heart disease, consented to be a subject. The patient was tested for three-dimensional forces of gait wearing temporary prosthesis and the same test was performed three months later with a newly designed (permanent) prosthesis.
Results: The results indicated that the patient had increased anterio-posterior and push-off forces with the permanent prosthesis. In addition, the medio-lateral forces were reduced which resulted in better balance during gait.
Conclusions: Rehabilitation specialists should fit the prosthetic devices to the patients rather than fitting the patients to the prosthesis. In this study, the force analysis of gait was beneficial in assessing the best fit of prosthesis. Therefore, motion analysis should be performed to observe any deviations in balance, gait, and forcedistribution.

Abnormal movement patterns during gait increases the rate of energy expenditure to maintain balance and change of speed of motion [1]. This increase is may be due to pain, fracture, muscle paralysis, amputations, and/or design error of artificial limbs. Energy expenditure is increased because [1] abnormal gait produces excessive displacements of the body’s center of gravity, [2] muscles may have to act at higher intensities and for prolonged periods on the gait cycle, and [3] additional muscles may be recruited to help carry out the stance and swing phase of walking. In the presence of gait impairment, the body usually compensates by decreasing the speed of walking to maintain the lowest possible oxygen consumption rate [2,3].

The human body has an extraordinary compensatory ability to respond to an injury or impairment. The compensation may include but is not limited to limping to avoid foot pain, use of ligaments to substitute for muscles in stabilizing joints, use of orthoses and prostheses, and use of the assistive devices to provide locomotion (e.g., canes, crutches or wheelchairs).

Prosthetic design is an art as well as a science. Both aspects are significant for an amputee to develop confidence, comfort, cosmetics, decreased energy expenditure, force distribution, and achievable goals [4]. Furthermore, it is important to measure ground reaction forces in all three directions during gait to measure the efficiency and fit of the prosthesis to the patient.

The activating forces for prosthesis are muscular power, gravity, and friction. The alignment of different components relative to the joints and segments is important for a symmetric movement. If the forces from above and below are not co-linear, the prosthesis will tend to rotate. These rotational forces not only cause increased pressure within the socket, they cause the amputee to walk inefficiently because greater effort must be exerted to prevent the center of gravity from traversing too far from its normal path. Commean et al. [5] concluded that skin surface slippage or frictional forces relative to the internal wall of lower extremity prosthesis should be evaluated for socket fit and function under various loading conditions.

Prosthetic gait differs from normal gait because the mechanical device imposes its own limitations and the amputation produces multiple deficiencies. As in normal gait, the goal of prosthetic gait is to transport oneself as smoothly and efficiently as possible. It is important to train an amputee symmetrically during rehabilitation. In order to achieve this, scientifically based testing’s can be carried out to modify and adjust the prosthesis, socket, suspension, and length to assure the efficient and symmetric gait pattern of the patient.

A socket partially encloses the stump to form a union between it and the artificial limb. Its function is to provide stability and to transmit forces as accurately as possible between the device and the patient’s body. The prosthesis must be held on by some form of suspension, e.g., suction, a strap, condylar clamping, muscular grasp or friction. Various straps may be used over bone prominences, over the shoulders, or around the waist. Garter belt and corset suspension may be advisable in special circumstances.

The terminal device is that part of the artificial limb that contacts the environment. In the leg, it is the foot that transmits forces for propulsion.

Amputation of lower limb may occur from many causes. Among them are accidents, vascular disease, infection, tumors, etc. The most common cause of lower-limb amputation is the development of gangrene from vascular disease or diabetes.

The rehabilitation specialists, prosthetists, physical therapists, or health care specialists should carefully assess the best fit of prosthesis to an amputee rather than fitting an amputee to the prosthesis. They should not ignore patients complaints of pain and discomfort during ambulation.

The technique of motion analysis using force plates is a valuable scientifically based method to assess the forces of normal and pathological function of gait. This instrument measures the ground reaction forces in the anterior-posterior (A-P), medio-lateral (M-L), and vertical directions (V) [6].

These forces can be used to identify the impact of prosthesis on a patient by assessing joint reaction forces during gait. The abnormal gait pattern can be identified by comparing with the normal forces of gait.

In a normal gait, the vertical component is 1 to 1.2 times of body weight (BW), anterior-post force is 0.15 BW, and medio-lateral is 0.01 BW. The purpose of gait training and rehabilitation of patients is to bring the forces closer to normal values according to the body weight.

A properly fitting prosthesis must produce almost normal forces in all directions. If the forces are extremely high, the person has to spend more energy and will experience increased fatigue. Thus, it is extremely important to examine the prosthetic design, and modify it to reduce forces.

The abnormal forces can be altered by the material, design of prosthesis, and training to minimize gait deviations. Many people with trans-tibial amputations continue to participate in sports and leisure activities attributed to a properly designed prosthesis combined with rehabilitation and gait training therefore, the purpose of this casereport was to identify the force variations and alignment issues of a trans-tibial amputee to fit a proper prosthesis.

The patient was a 58-year-old female (weight 84 kg, height 6 ft 1 inch) who was diagnosed with kidney disease, diabetes, and heart disease. The patient underwent below-knee amputation in 1996, and was fitted with a temporary prosthesis. The patient tried eight different prostheses for the last eight years without success.

This case-report examined the 3-D forces of two temporary prostheses T1 is the original prosthesis that was designed eight years ago, T2 is the one designed after the initial testing of T1, and the Permanent, the newly designed prosthesis. The patient consented to participate in this study.

The subject was given pre-trial practices of walking on the force plates. The subject performed three trials in which she walked at her own pace wearing her temporary prosthesis. The 3-D forces were recorded using two AMTI force plates. The duration of data collection was 3 seconds at 600 Hz. In other words, the prosthesis was loose. She was referred to a local prosthetist who fabricated another prosthesis (Temp2) and Permanent prosthesis based on the results of the force distribution of gait.

All 3-D force measurements for the Temp 1, Temp2, and the Permanent were shown in succession in Figures 1, 2, and 3, respectively. The first force curve in each graph represents right foot followed by left. The antrio-posterior Force, left indicates that there is no push-off because the force curve ended abruptly. But the left force curve, indicates that the force gradually reached zero after the new prosthesis. This is a significant change from the temp1 (Figures 1-3). The medio-lateral force curve for T2 is almost similar to the shape of the normal. The T1 contact duration for right medio-lateral force is greater than the T2 (Figures 4-6). There is no significant difference observed in vertical forces (Figures 7-9). Another significant finding was the contact duration for the normal was 1.4 seconds compared with 2.0 seconds for the temporary prostheses. The patient was given a home exercise program and recommended continued physical therapy. 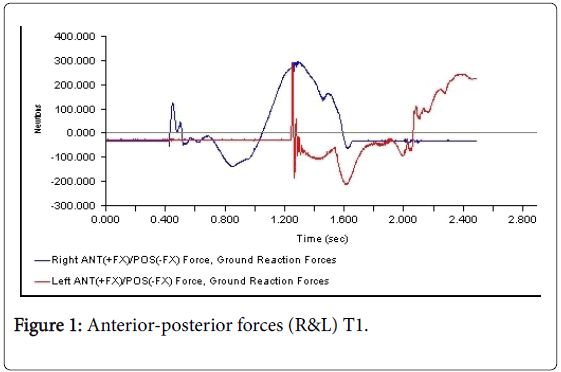 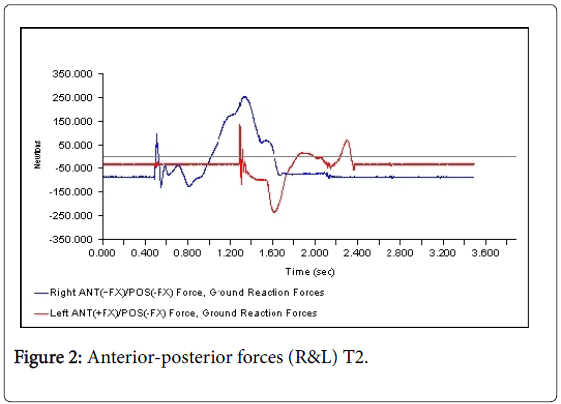 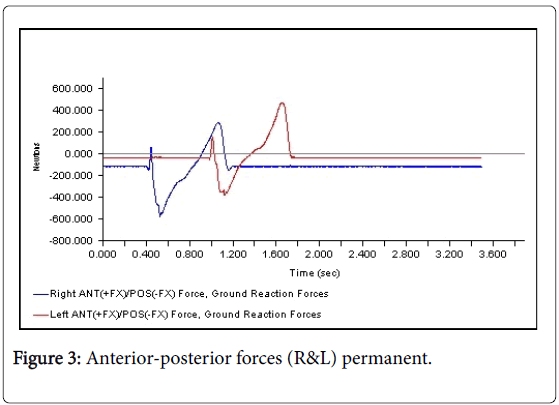 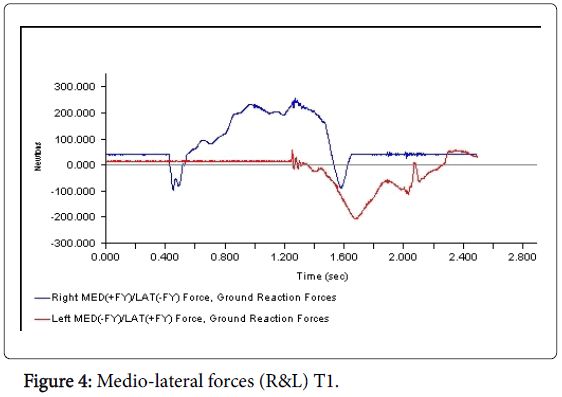 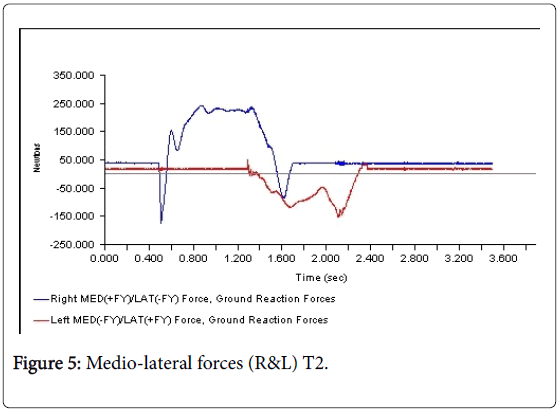 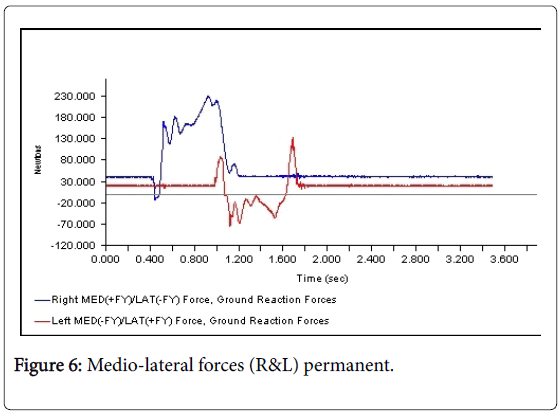 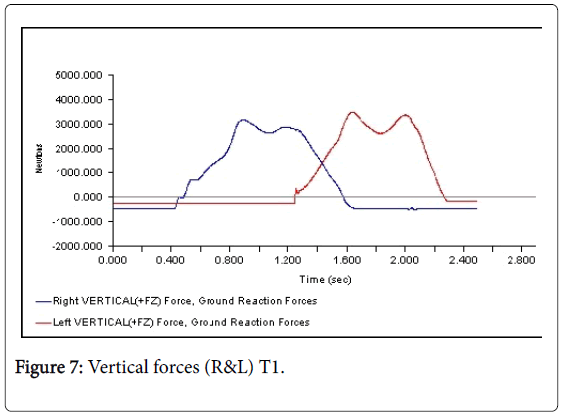 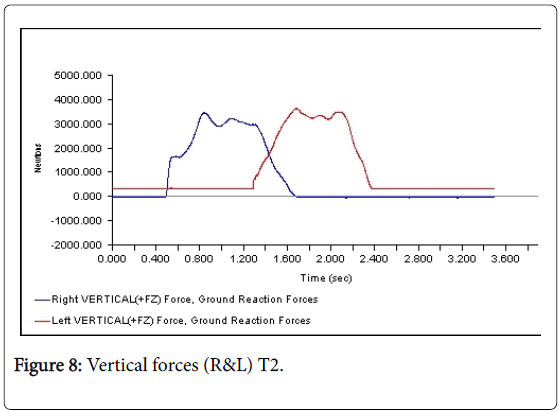 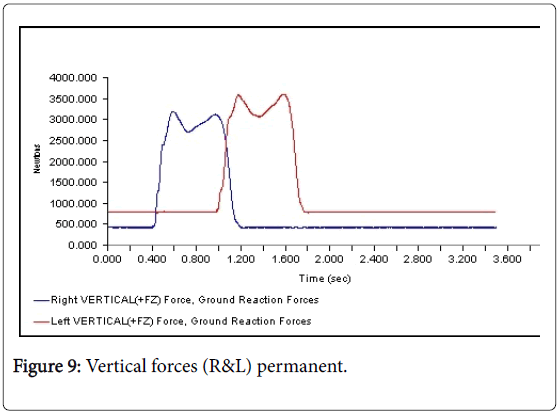 Based on the results of this study, it is imperative that patients’ pain and efficiency of gait should be taken into consideration while designing prostheses. Motion analysis should be performed to observe any deviations in balance, gait, alignment of joints, and force distribution. Furthermore, an observation of her movements also indicated that she had misaligned hip joints. The right hip joint was lower than the left (left amputation). In addition, she had external rotation and abduction at the right hip and internal rotation and adduction at the left hip. She was given therapeutic mobilization exercises for hip joint and lumbar area for corrective measures. Although the stump is 3-4 inches below the knee, there was significant atrophy of left quadriceps and hamstring muscles due to the pressure of the socket against the skin above the knee joint. Therefore, therapists should give serious considerations to physical conditioning, strength development, and alignment of hip joints along with proper fit of prostheses. Daily activities for an amputee should include strengthening, flexibility, endurance, and posture and joint alignment. Lack of exercise may contribute to atrophy and weakness in the muscle and joints. Therefore, we recommend home exercise programs and continued physical therapy for improved functional activities.