Tramadol vs. Buprenorphine for the Treatment of Opioid Dependence: A Comparative Study

Copyright: © 2015 Pahwa M, et al. This is an open-access article distributed under the terms of the Creative Commons Attribution License, which permits unrestricted use, distribution, and reproduction in any medium, provided the original author and source are credited.

Background: Tramadol is an atypical centrally acting synthetic analgesic and its o-demethylated metabolite, (+)-o-demethyltramadol (known as m1), has greater affinity for the mu-opioid receptor which makes it a candidate for opiate withdrawal treatment. , it appears to have low abuse potential and is a non-scheduled analgesic.

Aim and Objective: to compare the effects and relative clinical utility of Tramadol and Buprenorphine in the treatment of heroine withdrawal in opioid dependant patients.

Results: There was statistically significant difference between the two groups in patients with moderate level of addiction with 78% of Tramadol group and 57% of the Buprenorphine group completed detoxification at the end of 12 weeks. Whereas patients with severe level of addiction had to be maintained on buprenorphine and detoxification could not be completed with high dropout rate in tramadol group

Many medications have been used over the past thirty years for the treatment of opioid withdrawal, including methadone, LAAM, propoxyphene, clonidine, parenteral buprenorphine, and, more recently, sublingual buprenorphine. Each has been found to have clinical strengths and limitations. Tramadol is an atypical centrally acting synthetic analgesic. In its parent form, tramadol exists as a racemic mixture of two active enantiomers which undergo hepatic biotransformation to form N- and O-demethylated compounds. The O-demethylated metabolite, (+)-O-demethyltramadol (known as M1), has greater affinity for the mu-opioid receptor than the parent compound and is responsible for tramadol’s mu-opioid activity, and is primarily due to its binding to the micro receptor [1]. Despite this micro receptor activity, tramadol appears to have low abuse potential and was approved as an unscheduled analgesic in the USA in 1994 based largely on epidemiologic experience, and a number of animal and human [2-4] studies suggested, it had low abuse potential. The pharmacologic profile of tramadol makes it a candidate for opiate withdrawal treatment; Whereas Buprenorphine has high abuse potential.

To compare the effects and relative clinical utility of tramadol [5-8] and buprenorphine [9,10] in the treatment of heroine withdrawal in opioid dependant patients.

• Baseline investigations were done and after 8-12 hours of last heroine intake and treatment was initiated with 2 mg of buprenorphine and 100 mg of tramadol which was gradually increased as per patient’s withdrawal symptoms.

• Patients were detoxified in inpatient setting and followed with intensive outpatient treatment. Measurements using COWS and CGI were taken at every alternate week and patients were followed up for 12 weeks. 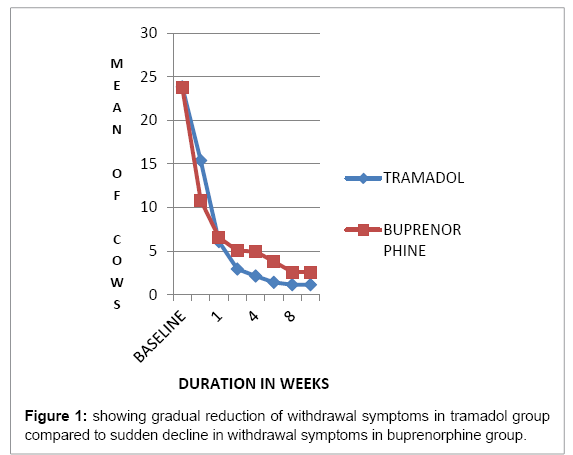 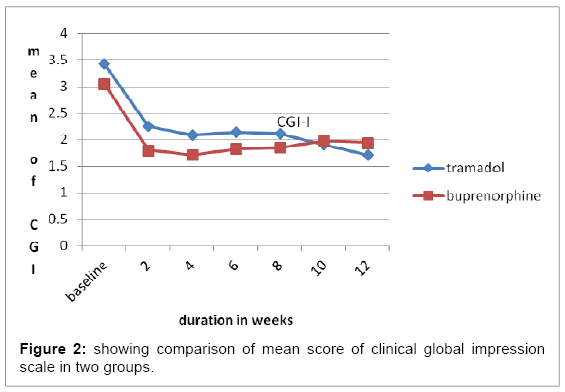 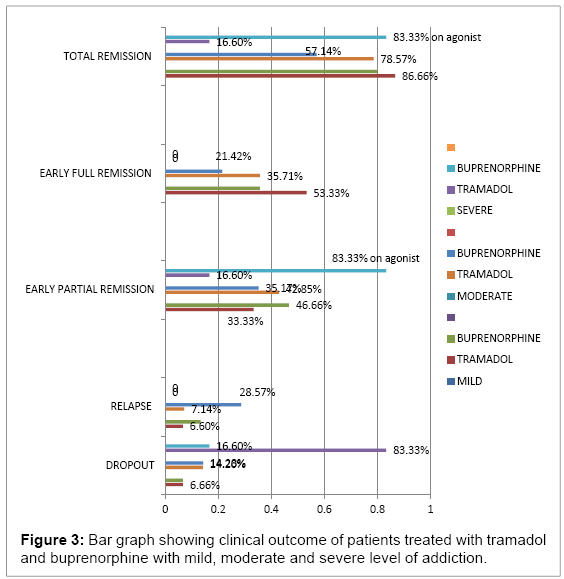 • Tramadol appears to have comparable clinical efficacy as buprenorphine for treatment of patients with low levels of opioid dependence [5,13]

• Patients with moderate level of dependence; tramadol has more efficacy in detoxification and relapse prevention with minimum abuse potential.

• Patients with severe and persistent form of addiction are more likely to have co occurring psychiatric morbidity and typically require long term comprehensive treatment and in such patient’s induction and maintenance on buprenorphine may be more effective than detoxification for engaging and retaining patients in Comprehensive Outpatient addiction treatment.

• Detoxification with flexible dose schedule and tailoring the treatment according to individual has better outcomes as compared to fixed dose rapid or ultra-rapid detoxification [14].

• Tramadol has good efficacy [5,6,13] in detoxification and relapse prevention in patients with moderate level of opioid dependence as compared to buprenorphine [15].

• Whereas Buprenorphine is better for maintenance treatment and is of higher clinical utility in severe level of opioid dependence where maintenance therapy is required [10,12].

• These findings, if reproduced in larger studies with stronger research designs, have potentially great implications for the management of opioid withdrawal in both the inpatient and outpatient setting.