Copyright: © 2016 Venkataram, et al. This is an open-access article distributed under the terms of the Creative Commons Attribution License, which permits unrestricted use, distribution, and reproduction in any medium, provided the original author and source are credited.

Scars following injuries are common and an important cause of concern to patients. They can be treated with various modalities including lasers. Recently, fractional lasers have emerged as an effective, safe modality in tackling this challenge. There are limited publications on the efficacy and safety of treatment of post trauma scars with fractional ablative laser. Here we are presenting a case of posttraumatic scar treated with fractional ablative erbiumyag laser which showed significant improvement in colour, texture and overall appearance of the scar.

Scars following trauma [1] is a cause of concern for many a patient. Various modalities have been used for the treatment of scars over the years. Corticosteroids, dermabrasion, surgical revision, chemical peeling, silicone gel application, pressure therapy, and radiation have been used with varying results [2]. Ablative lasers such as the carbon dioxide (CO2), erbium: yttrium-aluminum-garnet (Er:YAG), and pulsed dye (PDL) lasers have been tried in traumatic scars [2] and nonablative lasers have also been used [3]. The fractional technology is a novel strategy which safely improves the appearance of scars [1].But there are limited studies to support this fact [3].

A 23 year old female patient presented in our clinic with a scar over left cheek. She had incurred it after a fall from a tree. There was no history of any surgery or burns. On examination, the scar was hypertrophic and skin colored (Figure 1). She had tried various topical medications for it but none of them helped her. She was advised fractional laser for her problem .After counseling her on the nature of her condition, treatment options, possible side effects, treatment outcome in detail, an informed consent was taken and objective analysis was done with photography. The procedure was repeated at an interval of 3 weeks till significant outcome. The response of treatment was assessed by a visual analog scale by an independent observer and also patient self-assessment.

The scar was cleaned. Topical anesthetic was applied for a period of 20 minutes to minimize pain. Patient’s eyes were protected. A fractional ablative laser namely 2940-PIXEL Erb: YAG Harmony Alma laser, was used for treatment using long pulse, with 49 matrices, starting at an energy of 1200mj and 6 stackings (Figure 1). The patient was asked to come after 3 weeks and the clinical improvement and side effect profile was assessed. An improvement of 25% was noted without any side effects (Figure 2). The energy was increased by 100mj in the subsequent sessions up to 1400mj 10 passes stackings (Figure 3). A total of 7 sessions was performed. The scar improved by 80% after about 7 sessions (Figure 4). 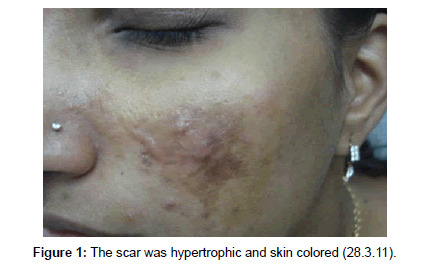 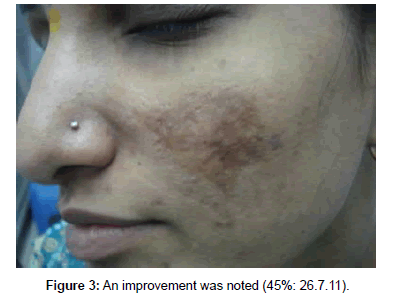 Lasers are gaining popularity in the treatment of scars. Ablative lasers such as co2 and erbium yag were found to be associated with increased incidence of side effects and prolonged recovery period. To overcome the risks associated with ablative lasers, nonablative 1320 Ndyag and 1450 diode were introduced but they were limited in their efficacy .They produce a controlled thermal injury in the dermis followed by neocollagenesis and remodeling. To resurface scars, minimizing side effects the fractional lasers were introduced [4,5].

Fractional lasers constitute one of the revolutionary changes in the field of lasers. They offer the best of both worlds. They combine the efficacy of ablative lasers and the better side effect profile of non-ablative lasers. The concept of fractional photothermolysis (FP) was introduced by Mann stein and his colleagues. Light is emitted in a pixilated fashion creating an array of microscopic columns of thermal injury referred to as micro thermal zones [6]. These columns are incorporated with epidermal dermal debris which is then eliminated by Trans epidermal elimination. The surrounding normal tissue repopulates the columns of micro thermal injury producing quick healing and decreasing the downtime. Such fractions are treated over multiple sessions until complete treatment [7-10]. Scars can also be treated with fractional lasers. They improve the texture, quality and pigmentation of the scars. The 1540nm erbium glass has been used in the treatment of post traumatic scars [11]. These scars also respond to fractional lasers combined with ablative and non-ablative lasers producing complete to near complete resolution.

Jung et al. demonstrated how ablative fractional CO2 is effective and safe in the treatment of early thyroidectomy scar [1]. According to Nouri et al, a nonablative laser such as PDL used in early treatment of scar decreases the erythema, hypertrophy and contraction of scars [13]. Choe et al. used a 1550 erbium glass laser for total thyroidectomy patients [14]. Further studies are needed to evaluate the effect of fractional lasers on post trauma scars and their mechanism [15]. To the best of our knowledge there have been no reports on the efficacy and safety of ablative fractional erbium: YAG laser for the treatment of posttraumatic scar and this is the first report on such an attempt.

They can be associated with various complications especially fractional ablative lasers. Transient effects include mild erythema, edema and peeling [16]. Aggressive use produces petechiae, persistent pigmentation, acneiform eruption, bacterial infections, cicatricial ectropion and hypertrophic scarring [17-21]. The patient in concern did not develop any such complications.