Copyright: © 2016 Hemer A, et al. This is an open-access article distributed under the terms of the Creative Commons Attribution License, which permits unrestricted use, distribution, and reproduction in any medium, provided the original author and source are credited.

Results: Overall Survival (OS) was 75% and Disease-free Survival (DFS) 68%. Interruptions in treatment were associated with a lower rate of survival.

The study included 138 patients diagnosed with anal carcinomfa in the Östergötland Region during a ten-year period from January 2003 until September 2014. Two of these 138 patients were misclassified and were in fact suffering from another form of cancer. Journals could not be found for 8 of the patients. A retrospective journal analysis was carried out for the 128 remaining patients. The following parameters were documented in a database; gender, age on diagnosis, TNM stage, symptoms, date of diagnosis, treatment regimen, follow-up data, multidisciplinary collaboration between the oncologist and surgeon, compliance of the treatment, acute and long-term side effects, relapse, distant metastasis, quality of life one year after treatment and intention of treatment (palliative or curative).

Patients were divided into three groups based on age: Patients younger than 50 years of age, patients between 50 and 70 years and patients older than 70 years.

The majority of patients (32) had cisplatin (carboplatin)/5-FU as an induction treatment. In the later part of the study 5 FU was exchanged to Capecitabine (16 patients). 2 patients underwent a different chemotherapy regime (Table 1).

The primary end point was to study the five-year overall survival rate for the patients. However, it was also intended to study side effects of treatment, quality of life (one year after completion of treatment), symptoms, and frequency of MDT collaborations.

The five-year survival rate for the cohort was compared using the following parameters; gender, age, TNM stage, relapse, distant metastasis, chosen treatment method and compliance of treatment. Only treatment for the primary cancer was documented. Treatment after relapse or distant metastasis was not included in the study.

Overall survival was calculated using Kaplan-Meier curves and comparisons of the survival curves from group to group were carried out using the Gehan-Wilcoxon test.

Tables and diagrams were made in IBM SPSS Statistics 22 and Microsoft Excel version 14.4.4.

This study was approved by the Institutional Review Board of Linköping University Hospital.

Information about symptoms could be found in the journals of the 124 patients.

In total, 101 of the patients in the cohort were discussed at an MDT meeting (radiation therapist, oncologist and surgeon) prior to treatment. 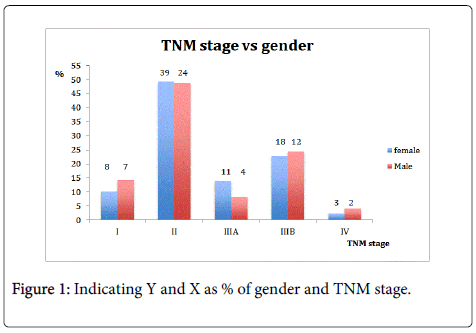 Figure 1: Indicating Y and X as % of gender and TNM stage.

Overall survival (OS) for the cohort was 75% and disease-free survival (DFS) 68% (Figure 2). Five-year OS was significantly higher for the two younger patient groups than for the oldest group (p=0.015) (Figure 3). 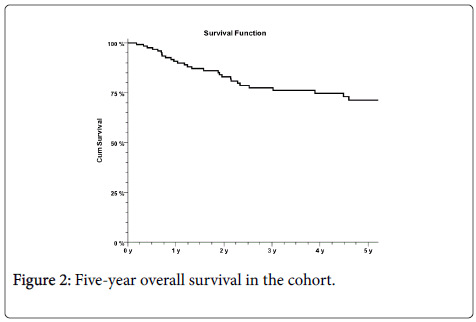 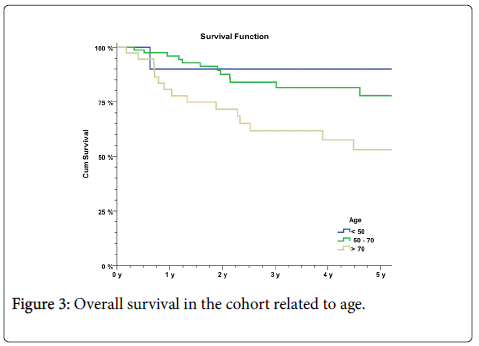 Figure 3: Overall survival in the cohort related to age.

Treatment and its compliance vs. survival

In total, 125 patients were given radiotherapy, either as monotherapy or in combination with chemotherapy (Figures 4 and 5). Of those, 110 were treated with curative intent. The remaining 15 patients were either treated with palliative intent, given pre or postoperative treatment, or the information was missing from their journals. 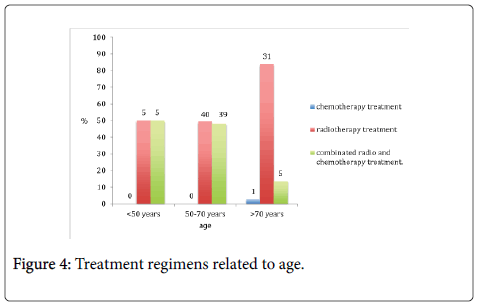 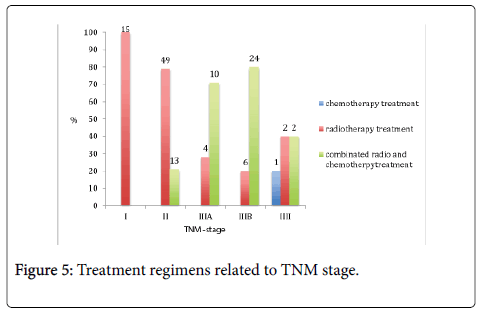 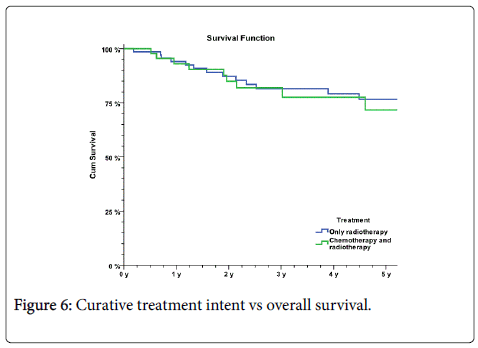 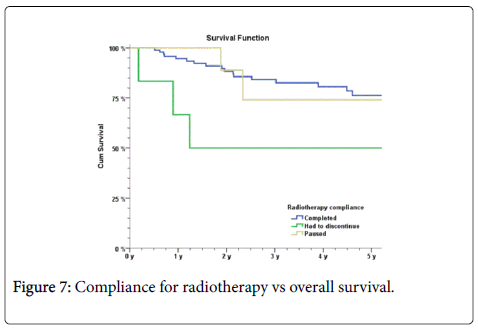 Relapse and distant metastasis vs. survival

Treatment, side effects of treatment and quality of life

In total, 9 relapsing patients suffered no interruption or other compliance problems during their chemoradiotherapy.

A regression of the tumour was observed in 105 of the 125 patients treated with radiotherapy. Surgery in the form of an abdominoperineal resection, either due to tumour remaining after primary treatment or because of a local relapse, was required in 18% of the patients. In 72% of the cases, the tumour was radically excised.

Side effects related to age

In our material the prognoses were worse for older patients. Their tolerance for treatment was lower, combination therapy was less common in this group and it is also obvious that when treatment was interrupted it had a negative impact on survival.

We intend to select a number of patients for long-term monitoring and interview regarding quality of life. There have been some reports in the literature concerning this matter [9-11].

In general, there is not much of a role for surgery in the treatment of metastatic disease except to provide palliation for pain, bleeding or faecal incontinence.

Squamous cell carcinoma of the anus is strongly associated with human papillomavirus (HPV) infection, representing the causative agent in 80-85% of patients. This will be further investigated in this material.

Overall survival for the entire group was 75% and disease-free survival 68%. This is comparable to other results reported in the literature.