Copyright: © 2014 Dannan A, et al. This is an open-access article distributed under the terms of the Creative Commons Attribution License, which permits unrestricted use, distribution, and reproduction in any medium, provided the original author and source are credited.

Intraoral piercing has increased in popularity in the last few years. This type of jewelry has been associated with periodontal and muco-gingival defects such as attachment loss and gingival recession. This case report described a 25-year-old female presented to the clinic of Periodontics at Witten/Herdecke University in Witten, Germany, with a tongue stud placed through the mid-dorsum of her tongue. The lower left central (LL1) and lower right central (LR1) incisors exhibited 6 mm and 5 mm lingual probing depth, 4mm and 3.5mm lingual recession respectively and localized radiographic bone loss in the mid-half of the roots. The treatment strategy consisted of removal of the tongue piercing, professional prophylaxis, oral hygiene instructions and an open-flap surgery of the lingual anterior region of the mandible with the application of enamel matrix derivative (EMD) and bone graft material. Results: At the 1-, 3- and 7-month recall visits, the patient’s oral hygiene has been improved, and the attachment loss appears to have stabilized. It is clear that the tongue piercing might be a risk factor for local periodontal complications.

In recent years, body piercing has become increasingly fashionable for purely esthetic reasons. The emergent interest in body adornment has stimulated a marked increase in the practice of intraoral and perioral piercing. The most commonly pierced oral sites are the tongue and lip (81.0% and 38.1%, respectively) among people with nontraditional body piercing [1]. Health care practitioners have recognized various adverse incidents associated with the piercing of oral structures. In a survey of 438 pediatric dentists, nearly one-fourth acknowledged treating patients for oral piercing-related complications [2]. Since 1997, at least 34 patients have been documented as having gingival recession and attachment loss attributable to oral piercing [1-14]

The tongue is usually pierced at the midline, typically in the median lingual sulcus, although piercings may also be performed on the dorsolateral lingual surface anterior to the lingual fraenum. The principal type of jewellery used in tongue piercings is barbells, which consist of a bar with a ball screwed onto each end.

Tongue piercings are the most commonly reported cause of damage to the dentition. In 1997, Di Angelis [13] first suggested that tongue piercings may result in abnormal tooth abrasion that may lead to cold sensitivity in the lower first molar teeth caused by cracked-tooth syndrome. Teeth may be injured during speaking or masticating or by biting the barbell or hitting it against the teeth.

Increasing numbers of case reports have pointed to oral piercings as a significant factor in gingival trauma. Gingival recession has been especially correlated with lip studs or labrets [1,4,15,16] and frequently occurs on the labial aspect of the lower central incisors [3,4,16-21]. Gingival recession, particularly on the lingual aspect of the mandibular anterior teeth, has also been associated with tongue piercing [3,4,16,17]. A positive correlation has been demonstrated between the prevalence of gingival recession due to tongue and lip piercing and duration of wear. According to Campbell and others [3], lingual recession of gingiva is observed after 2 years of wear of a tongue piercing. Longstem barbells significantly increase the prevalence of lingual recession. In 2006, Leichter and Monteith [17] reported an increased incidence and severity of buccal recession with lip piercing and duration of wear. Jewellery-associated recession frequently develops as a narrow, cleftlike defect on the lingual and buccal aspects of the mandibular incisors [17] with recession depths of 2–3 mm or more often extending to or beyond the level of the mucogingival junction [3]. Patients with lingual piercings may also be at risk of developing significant loss of periodontal attachment that may lead to tooth loss [17]. Severe attachment loss can develop even when gingival recession is minimal [3].

In this report, we presented a case of lingual piercing associated with localized gingival recession and attachment loss at the lingual surface of the anterior lower incisors. A complete treatment strategy was also described with a 10-month follow up.

A 25-year-old woman was referred by her dentist for a periodontal management of localized isolated areas of bone loss lower anterior teeth at the Department of Periodontology, Faculty of Dentistry at Witten/Herdecke University in Witten, Germany in February 2009. She was a diabetic patient but her medical blood records were under control and she seemed to be totally healthy without any accompanying complications. She was a past smoker. The clinical examination revealed a dome shaped barbell stud piercing in the tongue (Figure 1). The tongue stud has been in place for approximately 2 years. An initial clinical and radiographic evaluation was performed. A periapical radiograph revealed localized horizontal bone loss associated with teeth #31 and #41 (Figure 2). Clinical evaluation of the same area illustrated isolated 6 mm and 5 mm lingual probing depths respectively as well as 4 mm and 3.5 mm lingual recession respectively (Figure 3). The presence of slight supragingival plaque and calculus was noted in this sextant, but no other sites displayed loss of attachment. Grade (I) mobility was associated with the affected teeth (i.e. #31 and #41). In general, the patient’s oral hygiene was good. 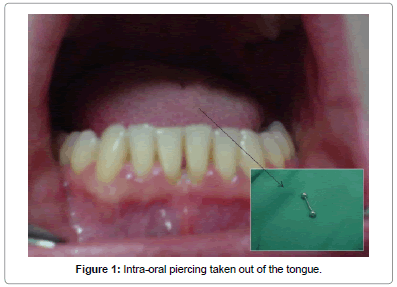 Figure 1: Intra-oral piercing taken out of the tongue. 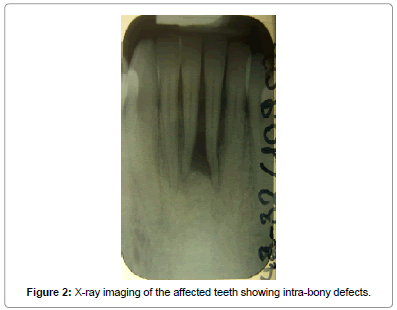 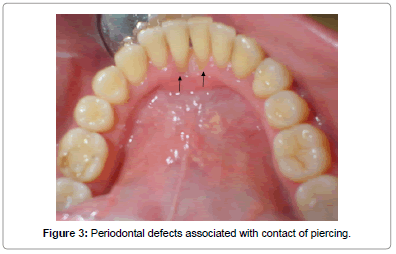 At the first visit, the patient was educated about the harmcausing potential of the tongue jewelry, and she agreed to remove it permanently. However, for some personal reasons, the patient refused to have her piercing photographically documented at the beginning of the treatment. The clinical management plan consisted of dental prophylaxis, and open-flap curettage with the application of enamel matrix protein derivative (Emdogain®) as well as bone graft material (Geistlich BioOss®) in the affected mandibular anterior region. The decision of using synthetic bone graft material was related to the previously-established strategy of the Department.

The patient gave us an oral consent to achieve the whole treatment plan.

After the patient had removed her tongue piercing, the first phase of treatment started consisting of a complete sub- and supragingival scaling and root planning which has been performed in 2 separate visits with seven-day interval by means of hand instruments as well as sonic scaler device. Moreover, the patient underwent intensive oral hygiene reinforcement through her treatment. One week later, a re-evaluation of the patient’s oral hygiene situation was performed. At this level, the patient showed a very good ability to keep her oral hygiene at high levels and thus was scheduled for surgical intervention.

The second phase was initiated one week later and consisted of minimally invasive open-flap periodontal surgery. In this phase, the incisor area affected by the tongue stud was accessed by a lingual fullthickness mucoperiosteal flap reflection utilizing sulcular incisions. The root surfaces were completely exposed in order to have an access to the bone defects (Figure 4). By means of hand instruments and a surgical ultrasonic device, a deep scaling and root planning was performed and the granulation tissues were completely removed from the intrabony defects. According to the manufacturer's instructions, a combination of enamel matrix protein derivative (Emdogain®) as well as bone graft material (Geistlich BioOss®) was applied into the defects where possible followed by a complete suturing to obtain a full covering of the surgical area (Figures 5 and 6). In order to stabilize the affected teeth during the whole phase of healing, a teeth splinting including teeth #33, #32, #31, #41, #42 and #43 was performed by means of titanium net which was cut and modified according to the case. To prevent postoperative wound infection, a dose of Doxycycline (100 mg) once a day was prescribed for a total of ten days post-operatively. The sutures were removed after 7 days and the patient underwent review visits at months one, three, and seven respectively. 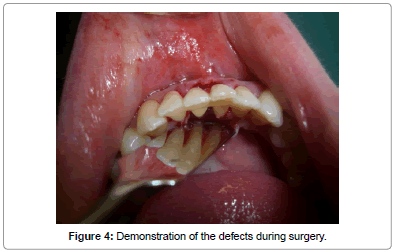 Figure 4: Demonstration of the defects during surgery. 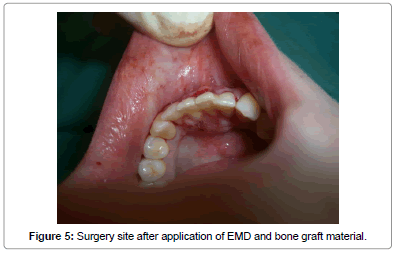 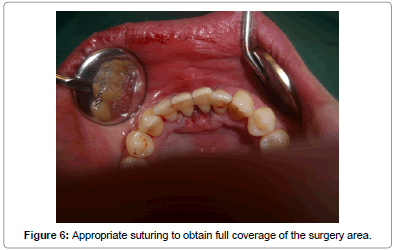 At one month post-operatively, the oral hygiene of the patient had improved since the lingual piercing had been completely removed. The gingival recession (GR) on the lingual side of teeth #31 and #41 measured 2 mm and 2.5 mm respectively. However, during this visit no measurement of the clinical attachment level (CAL) and the probing depth (PD) was performed in order to allow further healing of the soft and hard tissues affected (Figure 7). 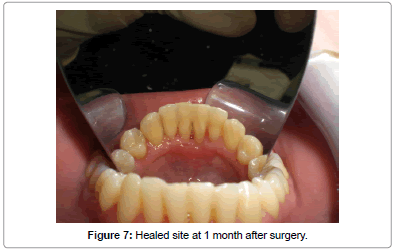 After 3 months, the GR records on the affected teeth mentioned above measured 2 mm and 2.5 mm respectively, and the PD measured 3mm for both teeth. At this phase, the teeth splinting had been removed. The teeth showed no further mobility.

After 7 months, the GR and PD records remained stable and measured exactly the same as they were after 3 months (Table 1). In this visit an x-ray of the affected area was performed and showed an initial remarkable mineralization of the bone defects. Moreover, the affected teeth were no longer mobile (Figures 8 and 9).

Table 1: Clinical parameters of the affected teeth at 3 time points. 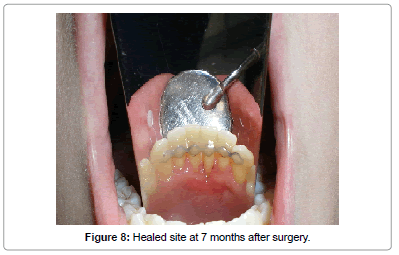 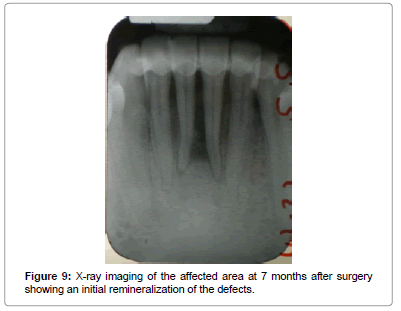 Figure 9: X-ray imaging of the affected area at 7 months after surgery showing an initial remineralization of the defects.

This case report demonstrates common features of periodontal tissue destruction associated with a barbell type tongue piercing. Since it is well known that such oral jewelries may compromise the patient’s oral hygiene [1,4,20] the permanent removal of the tongue piercing in our case seemed to be of greater importance and may have contributed to the surgical success obtained. However, further periodontal defects such as gingival recession, attachment loss and initiation of intra-bony defects have been shown to accompany lingual piercings [5,10,11,18]. A recent study has also shown that tongue piercing was correlated with an increased occurrence of enamel fissures, enamel cracks and lingual recessions [21].

Considering the treatment strategy for such cases, we used an open flap surgery in combination with the application of Emdogain® and BioOss® to fill the intra-bony defects. According to a study of Jepsen et al. [19] it has been shown that the clinical outcomes after treatment of intra-bony defects with an EMD/synthetic bone graft or EMD alone could bring similar but good results considering the shape of the defects. In our case, a remarkable improvement of the GR, PD and CAL records were achieved.

The postoperative prescription of Doxycycline in the current case may also have contributed to an improved outcome by virtue of its action on common periodontal pocket organisms when used as an adjunct to surgical periodontal treatments [20].

The diabetes status of the patient did not prejudice the results as this factor seemed under regular medical examination and well controlled by the patient herself.

It seems to be that lingual piercing may harm the periodontal tissues leading to different features of hard and soft tissue destruction and might be considered as a local risk factor for local periodontal complications. General dentists as well as periodontists should be aware of the intra-oral complications associated with oral piercing and therefore further educate their patients about the disadvantages of such popularly increasing trends.

Conflicts of Interest: Authors declare no conflict of interest related to this work

No financial support was provided.