Tungsten and the Mining Industry

Copyright: © 2017 Habashi F. This is an open-access article distributed under the terms of the Creative Commons Attribution License, which permits unrestricted use, distribution, and reproduction in any medium, provided the original author and source are credited.

Tungsten was isolated from its ores in 1783 and since then it became important because it had the highest melting point of metals - 3410°C. Cemented carbides are materials made by cementing tungsten carbide grains in a binder matrix of cobalt or nickel alloy by liquid phase sintering. The developments in carbide tools resulted in a revolution in the machine tool industry in the late 19th century. Tungsten steels are among the most heat resistant steels, high speed steels, and super alloys.

Mining and tunnelling are the sectors that benefit greatly from the metal tungsten (Figures 1-3). Cemented carbides revolutionized the industry. The increasing use of hard metals in the mining industry and in the machining of steel led to a great increase in the demand for tungsten. As a result of the increased use of tungsten materials in the armaments industry the metal has become of strategic importance. The preferred British and American usage is “tungsten” for the metal, whereas in Germany and a number of other European countries “wolfram” is the accepted form and its chemical symbol is W. A black mineral later called wolframite (Figure 4) was known in the tin mines of Saxony and Bohemia and thought to be a tin mineral because it had the same density. It was described in 1574 by the Bohemian metallurgist Lazarus Ercker (1528-1594), but he showed that it contained no tin. In 1757, a heavy white mineral found in a Swedish mine (Figure 5) was described by the Swedish chemist Axel Fredrik von Cronstedt (1722-1765) (Figure 6) who named it “tungsten” (Swedish for heavy stone) and considered it to be a calcium-containing iron mineral (Figures 4-6). In 1761 the German geologist Johan Gottlob Lehman (1719-1767) (Figure 7) director of the Imperial Mineralogical Museum in Saint Petersburg in Russia dissolved wolframite in acid and obtained a yellow powder (Figures 7 and 8). In 1781 Carl Wilhelm Scheele (1742-1786) (Figure 9) analyzed the white heavy mineral and showed that it contained lime and a new acid. Torbern Olof Bergman (1735-1784) concluded that it should be possible to prepare a metal from this acid and he gave the problem to his student from Spain Juan José Elhuyar (1745-1796) to investigate (Figure 10). When Elhuyar returned home in 1783, he and his younger brother Fausto Elhuyar (1755-1833) found out that the same acid was produced from both wolframite and scheelite. They produced the metal by reduction of tungstic acid from wolframite by carbon (Figure 11). They named it wolfram. In 1785 the German geologist Rudolf Erich Rape (1736- 1794) (Figure 12) found that the metal obtained from wolframite was the same as that obtained from scheelite. In 1820, the mineralogist Friedrich August Breithaupt adopted the word wolframite for the mineral containing the tungstate of iron and manganese, (Fe,Mn)WO4, and in 1821 Karl Caesar von Leonhard proposed the name scheelite for the mineral containing the tungstate of calcium, CaWO4, which was found to occur in a wide variety of colors [1] (Figure 13). 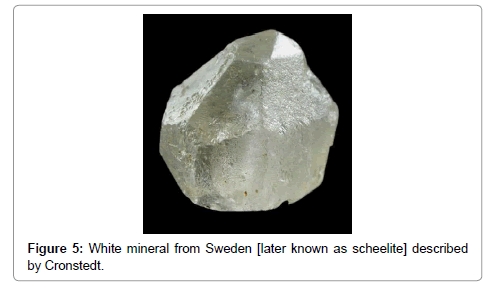 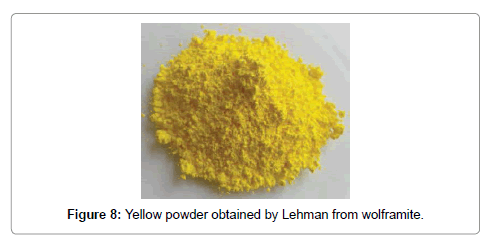 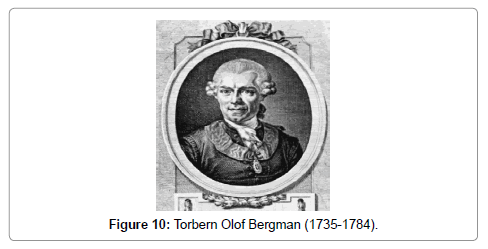 The Metal and Its Compounds

Tungsten (Figure 14) has a silvery white luster, a high density, and the highest melting point of all metals. It is the most important refractory metal used in powder metallurgy (Figure 14). Pure metallic tungsten is brittle at room temperature, and is therefore not suitable for cold forming. At elevated temperatures (ca. 100-500°C) it is transformed into the ductile state. Typical application includes incandescent lamp filaments, high-speed steels, high-temperature steels, and tool steels (Table 1). 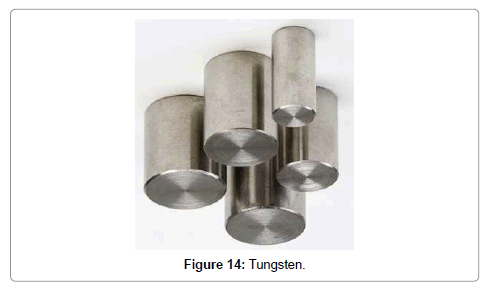 Tungsten is stable in air up to 350°C, but begins to oxidize above 400°C. A thin film of blue tungsten oxides forms on the surface, and this at first prevents further attack. As the temperature increases, cracks develop in the oxide film, and these favor oxidative attack. Above 800°C, rapid oxidation takes place with formation of WO3, which sublimes. For use at high temperatures, tungsten parts must be coated, used in a vacuum, or be surrounded by a protective atmosphere because an oxide film forms which is volatile above 540oC, for example, in incandescent lamp filaments, electron tube electrodes, and various types of heating elements. Silicide coating and cladding with platinum gold alloys are effective oxidation-resisting coatings. Tungsten is resistant to many severe environments. It resists nitric, sulfuric, and hydrofluoric acids at room temperatures. Mixtures of hydrofluoric and nitric acids dissolve tungsten readily. It is only subject to slight attack by hot alkaline solutions such as potassium, sodium, and ammonium hydroxides. Tungsten also has good resistance to several liquid metals including sodium, mercury, gallium, and magnesium; to molten oxide ceramics such as alumina, magnesia, zirconia, and thoria. It is therefore often used for crucibles to melt these materials in an inert atmosphere. Tungsten reacts at high temperatures with B, C, Si, P, As, S, Se, Te, and the halogens. When combined with carbon, it becomes one of the hardest man-made materials. It reacts with fluorine at lower temperatures. It is stable to chlorine up to 250°C, and to bromine and iodine up to 500°C. It is stable to gaseous nitrogen and ammonia up to 1400°C. There is no reaction with hydrogen. With carbon monoxide, the hexacarbonyl is formed at low temperatures, and the carbide above 800°C. Tungsten disulfide exhibits a layer like structure and offers excellent lubrication under extreme conditions. Compared to MoS2, it has a higher thermal stability. Tungsten hexafluoride is a colourless gas (boiling point 17°C) with a pungent, suffocating odour. It is available as liquefied gas in nickel cylinders [2].

Tungsten occurs in all oxidation states from 2+ to 6+ inclusive, the most important being 6+. This chemistry is extremely complex as the tungstate anion exists in monomeric form only in strongly alkaline solutions. In mildly alkaline solution, they polymerize. Below pH 1, sparingly soluble tungsten oxide hydrate (tungstic acid) precipitates. Tungstate ion, WO4 2–, is stable at pH>8. When the pH is gradually decreased by adding an acid, numerous poly-ions form:

Before the precipitation of the hydrated oxides, however, tungstic acid and hexatungstic acid are supposed to form first by polymerization and splitting of water:

Since stable crystals of sodium para-tungstate, Na10W12O41·28H2O, have been isolated (industrial product). In practice, wolframite concentrates, FeWO4, are leached with alkali to form the soluble tungstate ion which is filtered then acidified to form hydrated tungsten oxide:

Tungsten bronzes were discovered by Friedrich Wöhler (1800- 1882) in 1823. They are not related to bronze except in coloration. They are a group of compounds made up of tungsten trioxide, WO3, and an alkali metal, MxWO3, where M=an alkali metal and O<x<l. The color of these compounds varies with composition. At x=0.93 the color is a bronze. At x=0.32 the color is a blue-violet. For this reason tungsten bronzes are used as pigments. Tungsten bronzes are metallic and conduct electricity. However, in the hexagonal phase, they become superconducting [3].

Tungsten blue oxide (Figure 15) is prepared by calcination of ammonium paratungstate (Figure 16) under reducing conditions. It is not a chemically defined compound but consists of various different constituents like trioxide and different lower tungsten oxides depending on the calcination parameters. 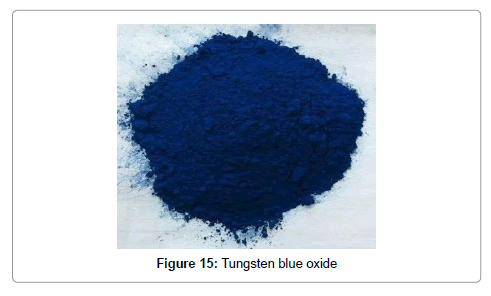 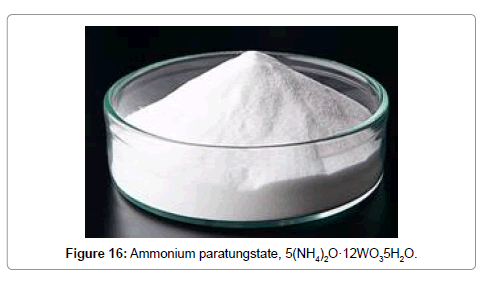 Most tungsten ores contain less than 1.5% WO3 and frequently only a few tenths of a percent. By beneficiation methods concentrates 65-75% WO3 are obtained. Wolframite and scheelite are the most important sources of tungsten. Both materials can be decomposed by either acids or alkaline solutions. Acid digestion is usually conducted with concentrated HCl in excess:

Sulfuric acid cannot be used because of the formation of insoluble calcium sulfate. The digested mass is washed to remove impurities and the residue is then dissolved in hot NH4OH. Ammonium wolframate is crystallized from the solution by evaporation.

Leaching of wolframite with concentrated NaOH at high temperature in an autoclave yields a solution of sodium wolframate, while iron and manganese are precipitated as hydroxides:

Scheelite is decomposed by sodium carbonate solution at 225°C:

The formation of CaCO3 films on the mineral particles retards the reaction. This factor can be eliminated, however, by using rotating autoclaves containing steel balls. The solution of sodium wolframate is purified by precipitation with acid:

Reduction of tungsten oxide is conducted in two stages: the first at 510°C to obtain a nonvolatile oxide which is then crushed, ground and then further reduced to the metal at 800°C

Because of its high melting point, the metal obtained are in the form of powders which are then sintered in another operation to massive metal if desired (Figure 17). When tungsten wire is heated for many hours it undergoes re-crystallization and as a result it becomes brittle. To avoid this unwanted effect, additives such as ThO2 are added in about 1% of the weight of WO3 before its reduction [4].

The developments that led to the industrial use of tungsten began in 1890 with the production of tungsten carbide in the electric furnace by the French chemist Henri Moissan (1852-1907) (Figure 18). They may be summarized as follows: 1903 - The first tungsten filaments for incandescent lamps were produced in Hungary. ? Tungsten catalysts are used for the removal of nitrogen oxides from stack gases by catalytic reduction with ammonia or urea; the products are harmless nitrogen and water vapour.